~ The full event card was announced for the August 19 show in Nagoya. The show will feacture the previously announced BJW Death and World Strong title defense.

~ The full event card was announced for the next DNA show on August 5. 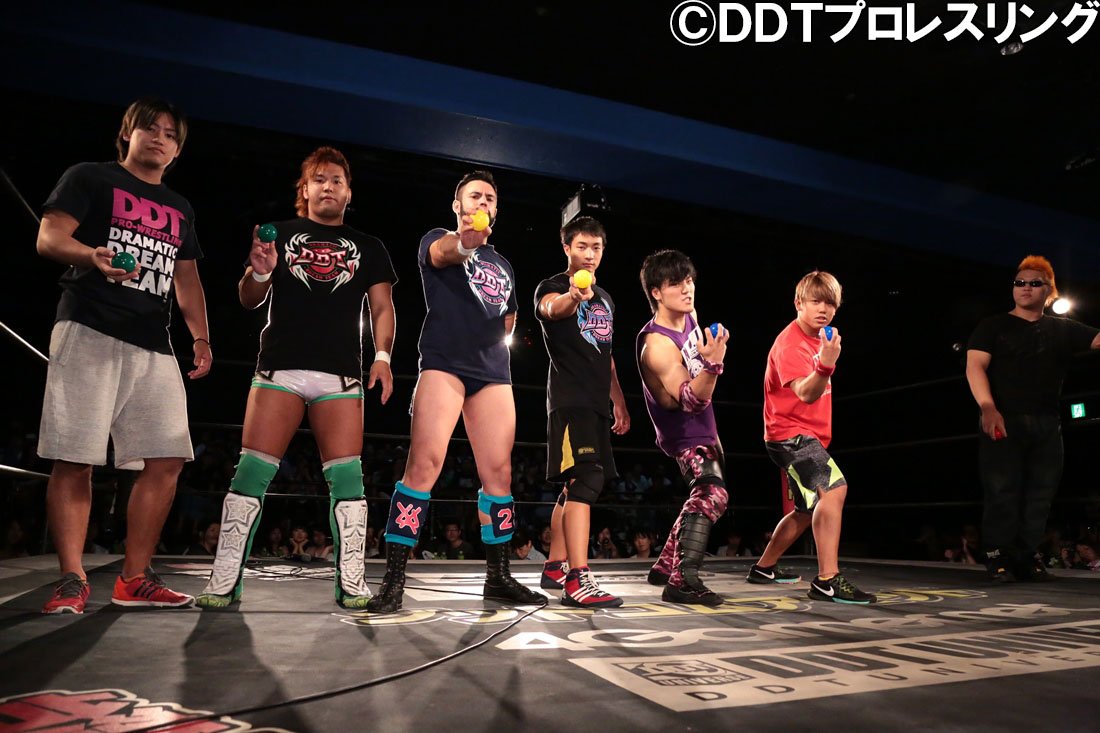 ~ The full event card was announced for the upcoming Ryogoku show on August 20. 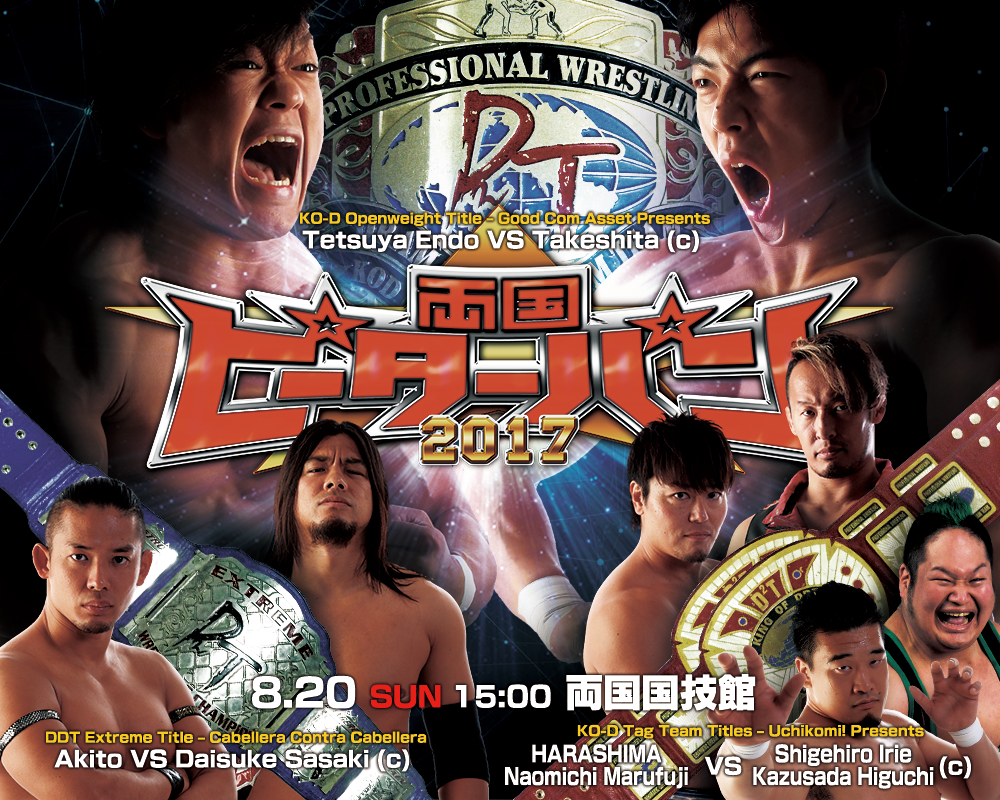 Following his participation in ZERO1′s Fire Festival, LEONA (Fujinami) will now be moving forward and competing for Pro Wrestling NOAH throughout the month of August, and potentially longer. Coming out of the ZERO1 league, LEONA has stated that he has a lot of regrets and this has lead him want single out a rematch against Kenoh. That he feels the need to continue growing and overcoming the challenges that are placed before him. Chairman Uchida accepted the young talents request and has even given him a rematch against Kenoh on August 26 at the Korakuen Hall. His first ever match in NOAH though will be on August 6, as he teams with Naomichi Marufuji to take on the team of  KAZMA SAKAMOTO and Cody Hall.

LEONA added that he doesn’t necessarily seek to win the match, but for his own personal growth as a wrestler. The ZERO1 Fire Festival was a strong learning experience, as that is the most he has competed in back to back singles matches so far in his career, and he knows he can only grow through steady competition. The last three years he has been living under his fathers protection in DRADITION, but he feels it is time now for him to begin to take every other opportunity that he can be apart of elsewhere as well.

Uchida has also put LEONA’s request to continue competing in NOAH in the future into consideration. That if LEONA shows that he can grow through the battles that he will face then the door could be left open for him.

The full event cards were also announced for the “DEPARTURE” show on August 6 and then the “Summer Navig. vol. 2” tour end on August 26 at the Korakuen Hall. Which the latter will feature three title matches. The main event of the August 26 show will see Katsuhiko Nakajima finally defending the GHC Heavyweight belt against Eddie Edwards. Edwards has been regularly competing in NOAH since March of this year and has been proving himself once more, as he has years of work with them in the past, in the NOAH ring. Nakajima accepted the challenge after overcoming Brian Cage on July 27.

Then two wrestlers will see their in-ring debuts for NOAH on August 12 in Yokohama, as Jyunta Miyawaki will be making his pro-wrestling debut and the Australian born Ashley Istria (180cm, 89kg, Born 6/28/1988 from Adelaide, Australia) will compete in NOAH for the first time. Istria has been training in NOAH throughout the month of July even appearing as a second, understudy role, at ringside.

~ Kaz Hayashi announced that the “WRESTLE-1 TAG LEAGUE 2017” will be taking place from September 24 through October 11. 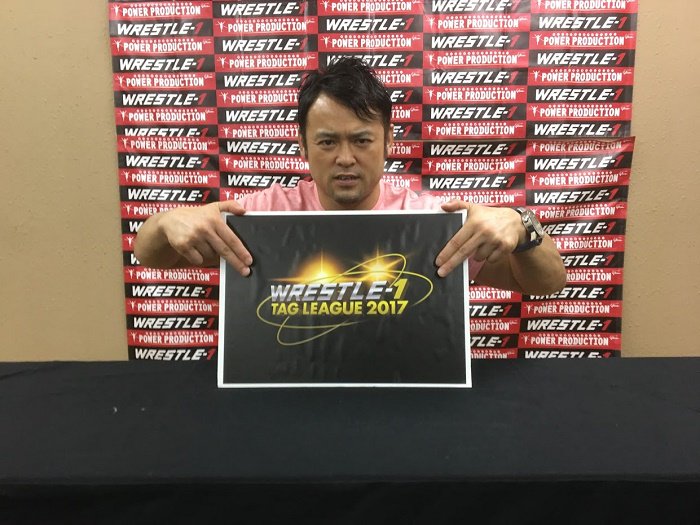 ~ The full event cards were announced for the August 4 and 5 shows.

~ Then it was also formally signed that Masato Tanaka will be defending the World Heavyweight belt against Kenoh on August 31 at the Korakuen Hall. 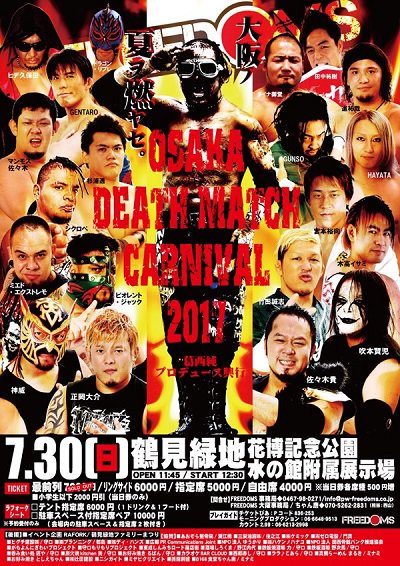 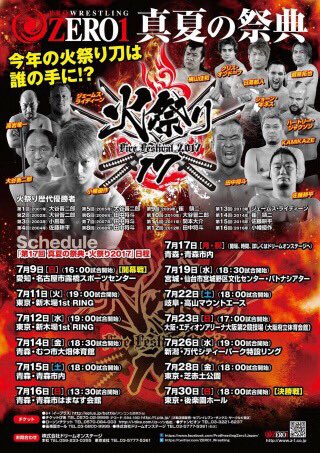 (1) Chris Orndorff vs. Hartley Jackson
♦Winner: Hartley (8:51) following a Death Valley Bomb.
(2) Yoshikazu Yokoyama vs. LEONA
♦Winner: LEONA (5:43) with a Backslide.
~ LEONA hinted at the possibility of trying to compete in NOAH ring, as the next step in his career.
(3) Shinjiro Otani & Tatsuhito Takaiwa vs. Hideki Suzuki & Keisuke Okuda (both FREE)
♦Winner: Otani (14:59) following a Release Dragon Suplex on Okuda.
~ Takaiwa put over Okuda as someone that he has been keeping an eye on as he offered the chance to team. Okuda stated that NEW might be done, but that does not mean he has to stop as well. As he accepted the veterans offer.

(4) NWA International Light Tag Championship Match: [Champions] Ikuto Hidaka & Takuya Sugawara vs. [Challengers] Kotato Suzuki (FREE) & Sean Guinness
♦Winner: Hidaka (13:49) following the Takatsugawa on Kotaro.
~ Hidaka attemped to make the challenge against Kotaro for the Junior belt, but SUGI made a shocking appearance as he made the challenge after taking out Hidaka. Kotaro accepted the challenge from SUGI.
~ Hidaka questioned SUGI’s appearance and direct challenge without first earning it. Though the two have a past history as SUGI competed as EL Blazer in ZERO1-MAX in the past.
~ While the champions were on the way out, Tatsuhito Takaiwa and Keisuke Okuda made the challenge for the Light Tag belts. 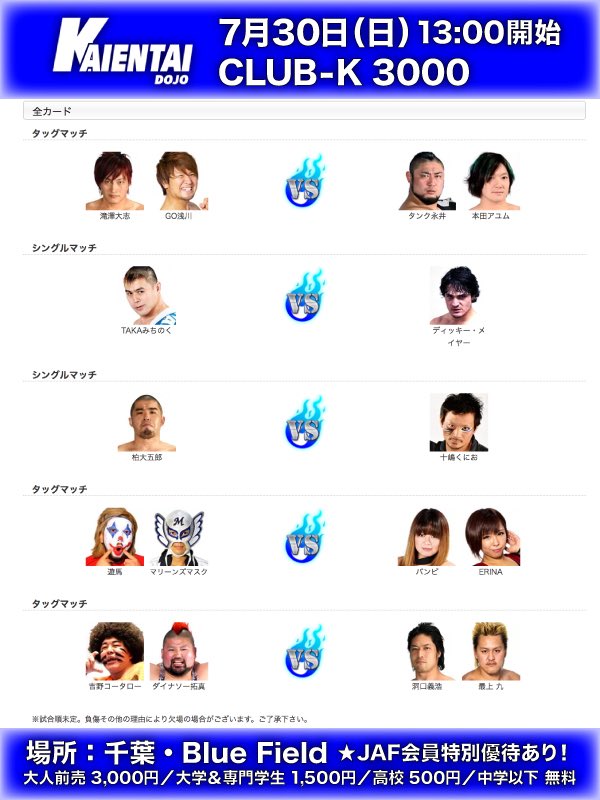 ~ Next up is the first day of the Kaioh tournament on August 6. 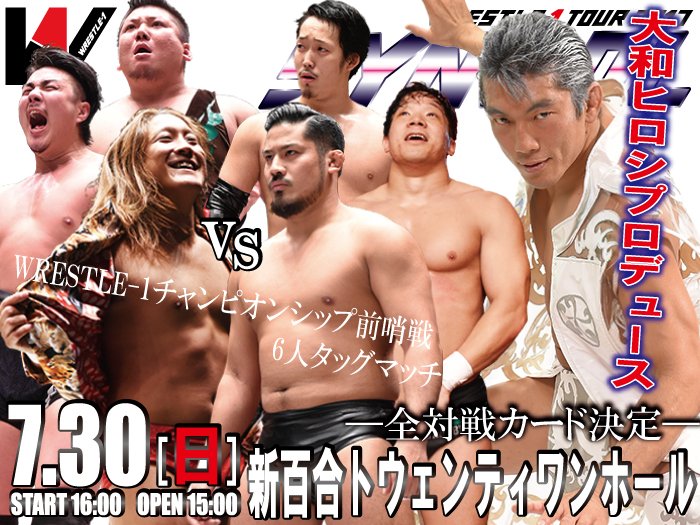 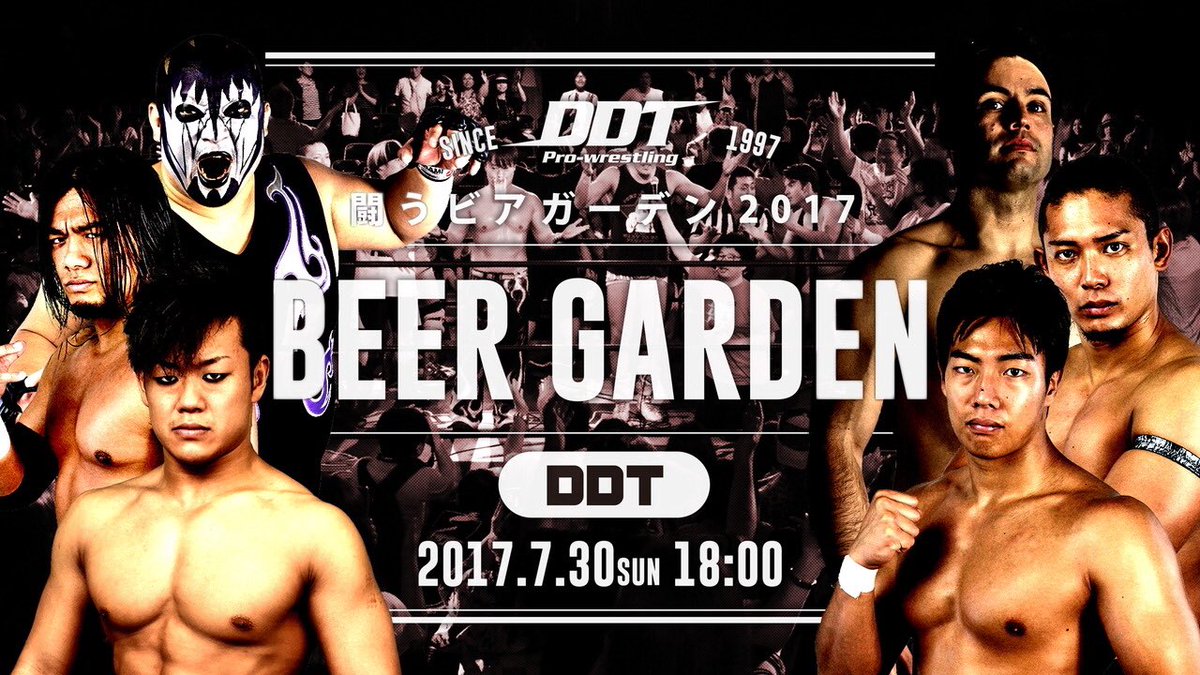 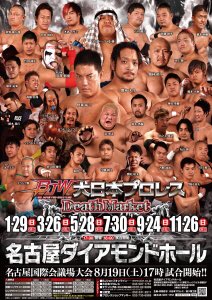 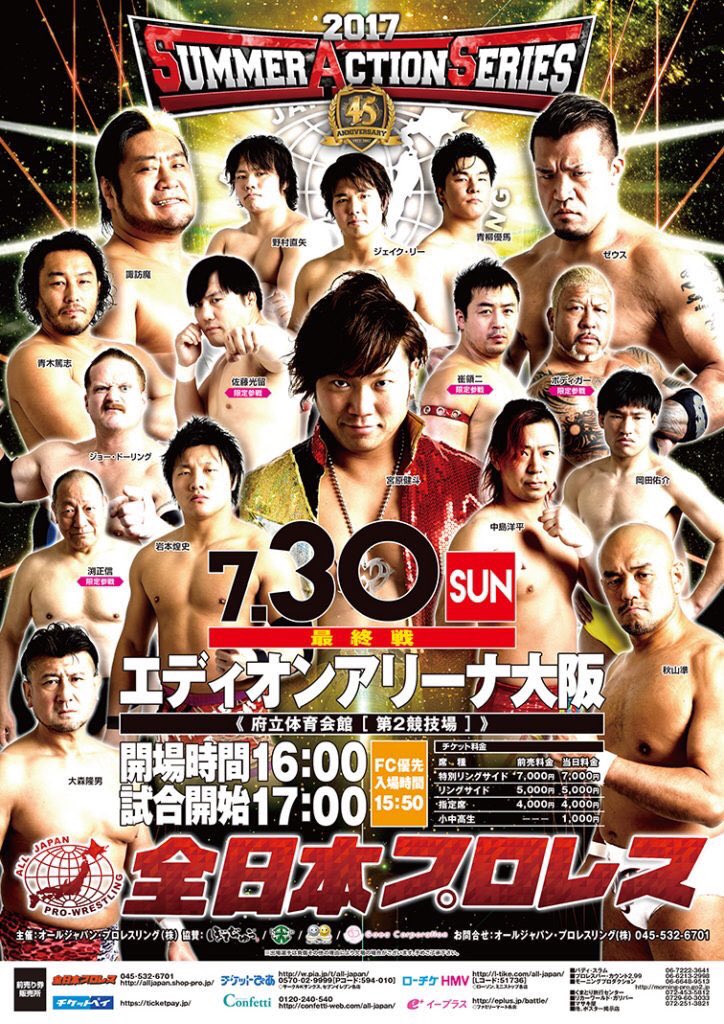 ~ Jake Lee was announced to miss today’s show due to a left knee injury. He received the injury during the World Tag defense on the 28th and has stayed in the Tokyo are to undergo an examination. Further details on the state of the injury will be released soon.

~ Black Tiger VII made his intentions known of wanting to challenge for the Asia Tag belts at Ryogoku on 8/27, and that he will be appearing at the 8/3 show at Shinkiba 1stRING.

~ Zeus will be running his own self-produce show on November 11 at the Azelea Taisho in Osaka.

(6) All Japan Pro-Wrestling Founding 45th Anniversary Memorial Battle in Osaka ~ The Road to RYOGOKU : Suwama, Kento Miyahara & Zeus vs. Shuji Ishikawa (FREE), Joe Doering & The Bodyguard (FREE)
♦Winner: Ishikawa (18:04) with the Splash Mountain on Miyahara.
~ Ishikawa exacts some revenge as he returns a loss to the Triple Crown challenger. The two are at a standstill as they keep going back and forth night after night. Though only one can walk out of Ryogoku.
~ Doering finally snapped against Suwama, as he forcefully made his declaration known of his withdrawal from Evolution. Aoki attempted to make the save, but it was futile as Doering turned on him as well. Doering declared that “Evolutions is finished”.

(1) 3WAY Match: Starlight Kid vs Hanan vs Ruaka
♦Winner: Starlight Kid (6:25) via pinfall on Hanan
(2) Shiki Shibusawa vs Hiromi Mimura
♦Winner: Mimura (7:42) with La Magistral
(3) Kaori Yoneyama & Natsuko Tora vs Hana Kimura & Kris Wolf
♦Winner: Wolf (10:14) following a Big Boot from Hana to Natsuko
(4) Yoko Bito, Konami & Mari Apache vs Shanna, Xia Brookside & Gabby Ortiz
♦Winner: Mari (10:09) with a Michinoku Driver on Ortiz
(5) 3WAY Tag Match: Mayu Iwatani & Jungle Kyona vs HZK & AZM vs Kagetsu & Viper
♦Winner: Kagetsu (11:14) with the Oedo Coaster on HZK
~Oedo Tai picked up the win despite miscommunication throughout the match.
~Io Shirai stormed the ring after the match and attacked Oedo Tai, then asked Viper to leave Oedo Tai and join Queen’s Quest. Viper accepted the offer.
~Io then announced she will make her official return on the 8/13 show at Korakuen Hall, and that she will be in the 2017 5★Star Grand Prix. She also issued a challenge to Team Jungle for the Artist of Stardom Championship.

~Stardom has also announced the blocks for the 2017 5★Star Grand Prix will be revealed on August 4.

~Sakura Hirota announced she will face Manami Toyota in a singles match on 10/27. 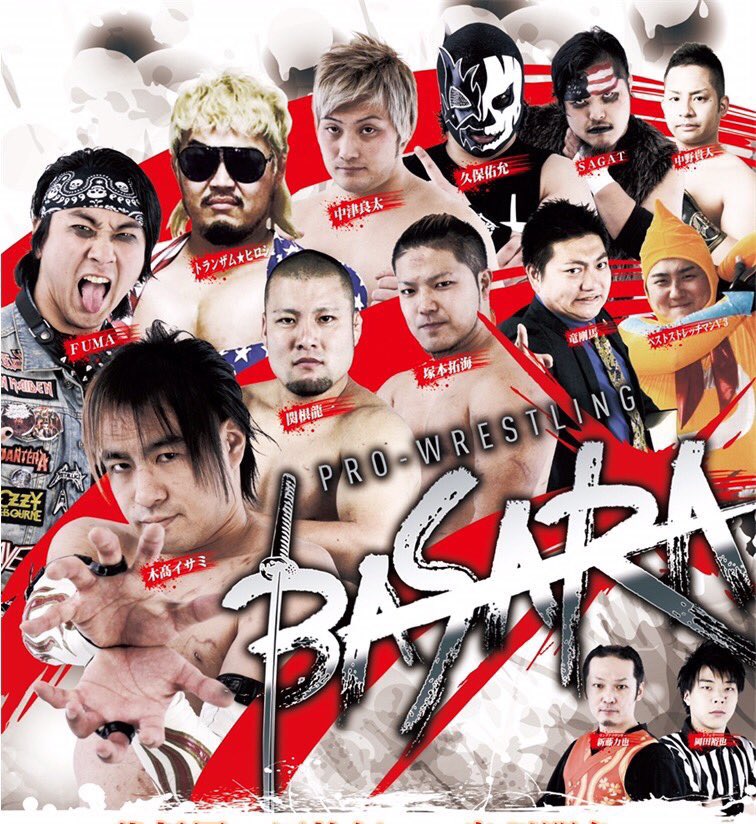 ~Jado missed the show due to injury. He and Toru Yano were replaced in the second match by Katsuya Kitamura and Hirai Kawato, while the fifth match was changed to a 6-man tag match with Tomoyuki Oka and Toru Yano being added to each team respective team.