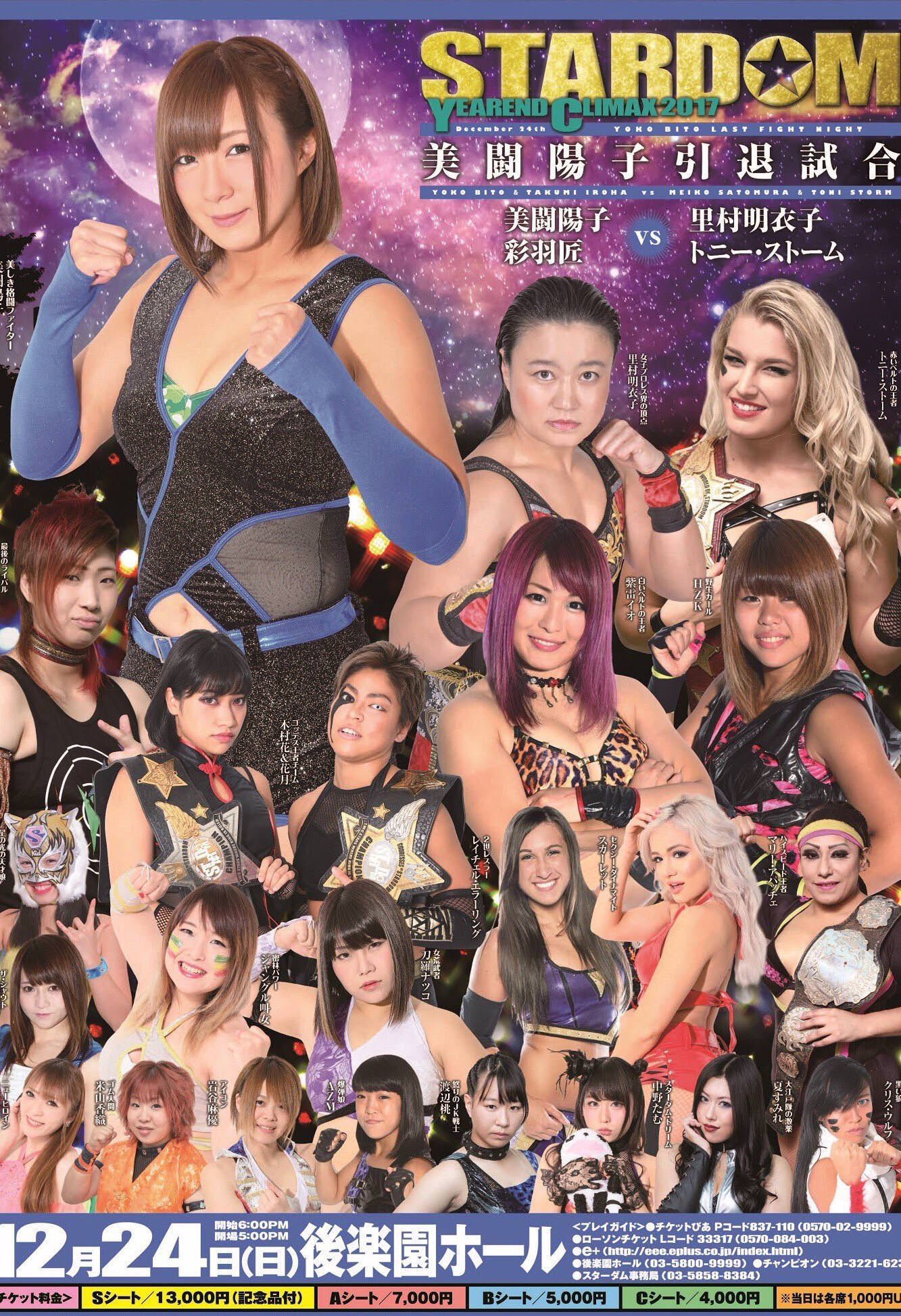 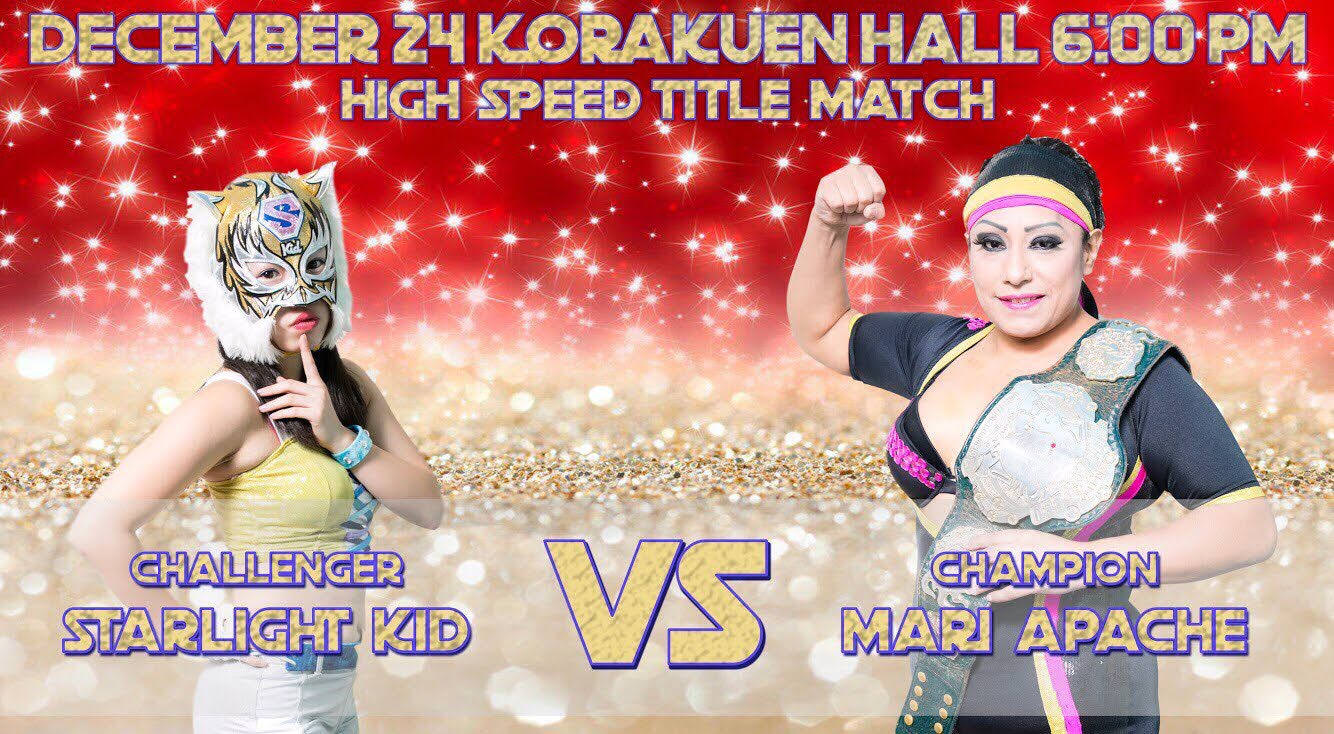 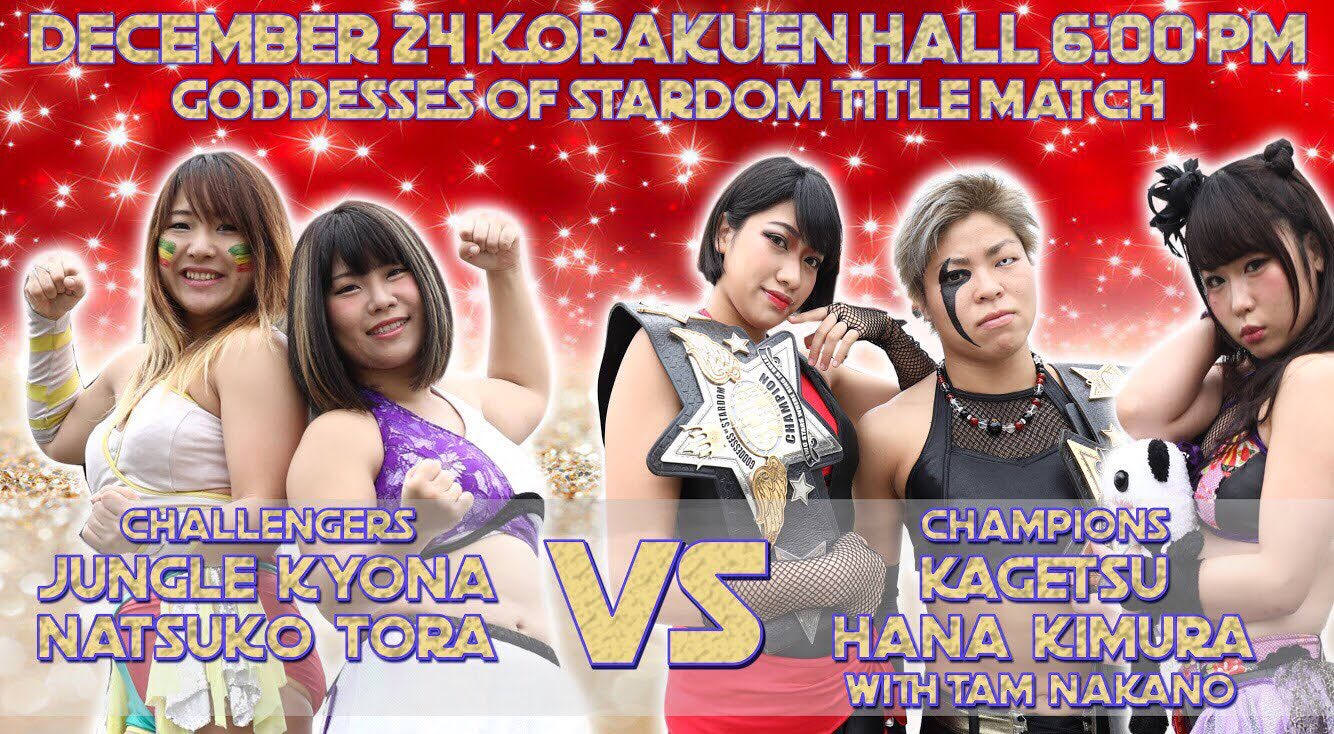 (6) Goddesses of Stardom Championship Match: [12th Champions] Kagetsu & Hana Kimora vs [Challengers] Jungle Kyona & Natsuko Tora
♦Winner: Kimura (11:16) following a Big Boot to Natsuko
~4th defense
~ Sumire Natsu interfered in the match and pushed Hana out of the way of a double clothesline, and took the hit herself. Once the match was over, both Hana and Tam Nakano shook Sumire’s hand. 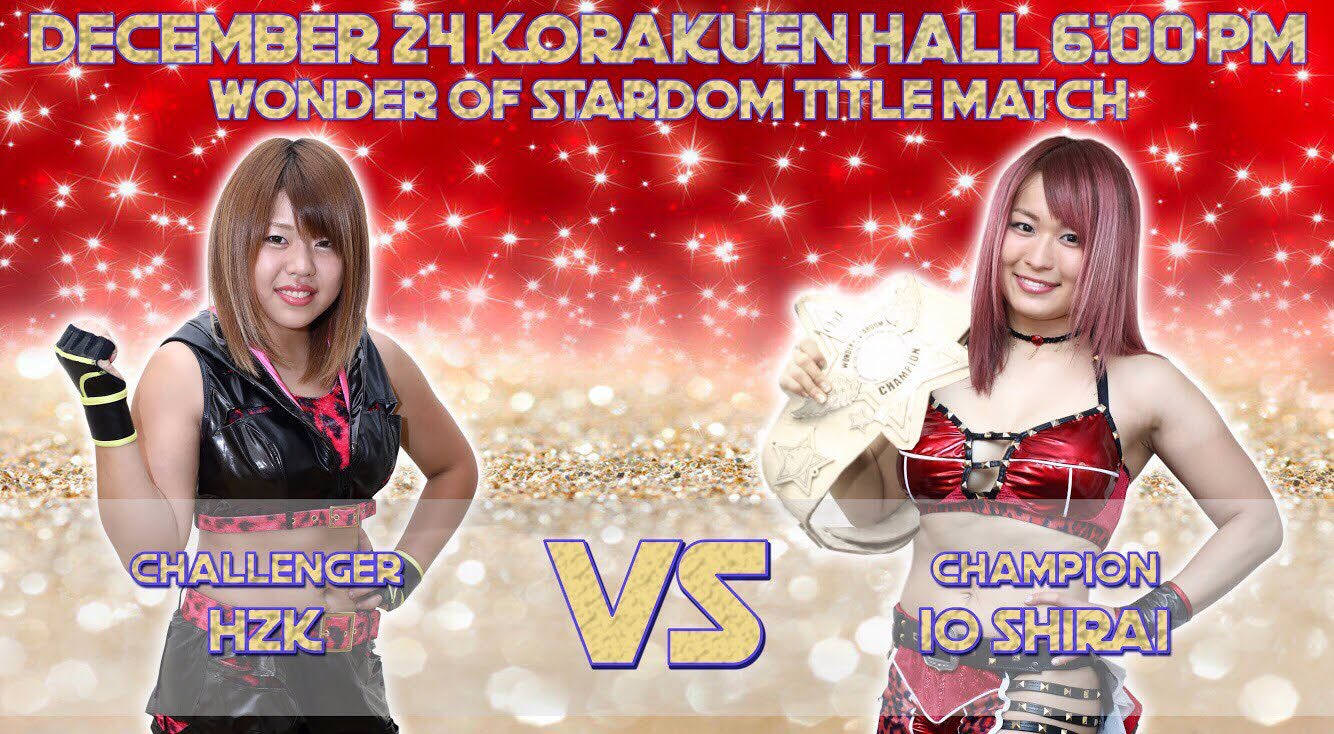 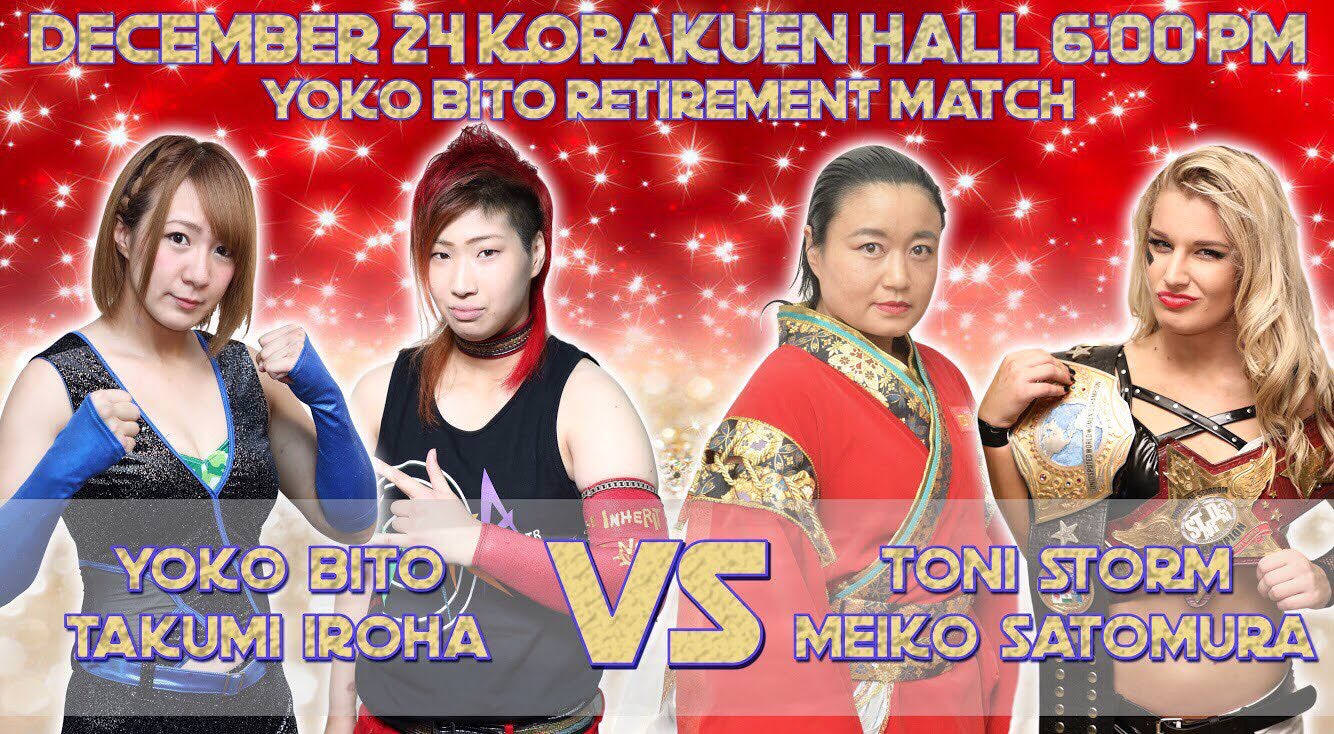 (8) Yoko Bito Retirement Match: Yoko Bito & Takumi Iroha (Marvelous) vs Toni Storm & Meiko Satomura (Sendai Girls)
♦Winner: Storm (13:06) following three Strong Zeroes to Bito
~ Toni Storm requested a future singles match with Satomura, and she accepted.
~ A retirement ceremony was held for Bito. Chigusa Nagayo and Takumi Iroha presented Bito with a bouquet of flowers on behalf of Marvelous. Oedo Tai gave Bito a mask, then performed their entrance dance routine with her. Yuzuki Aikawa also came to the ring to give Bito a present. Even Kairi Sane (formerly Kairi Hojo) made a surprise appearance to be with Bito during the ceremony. 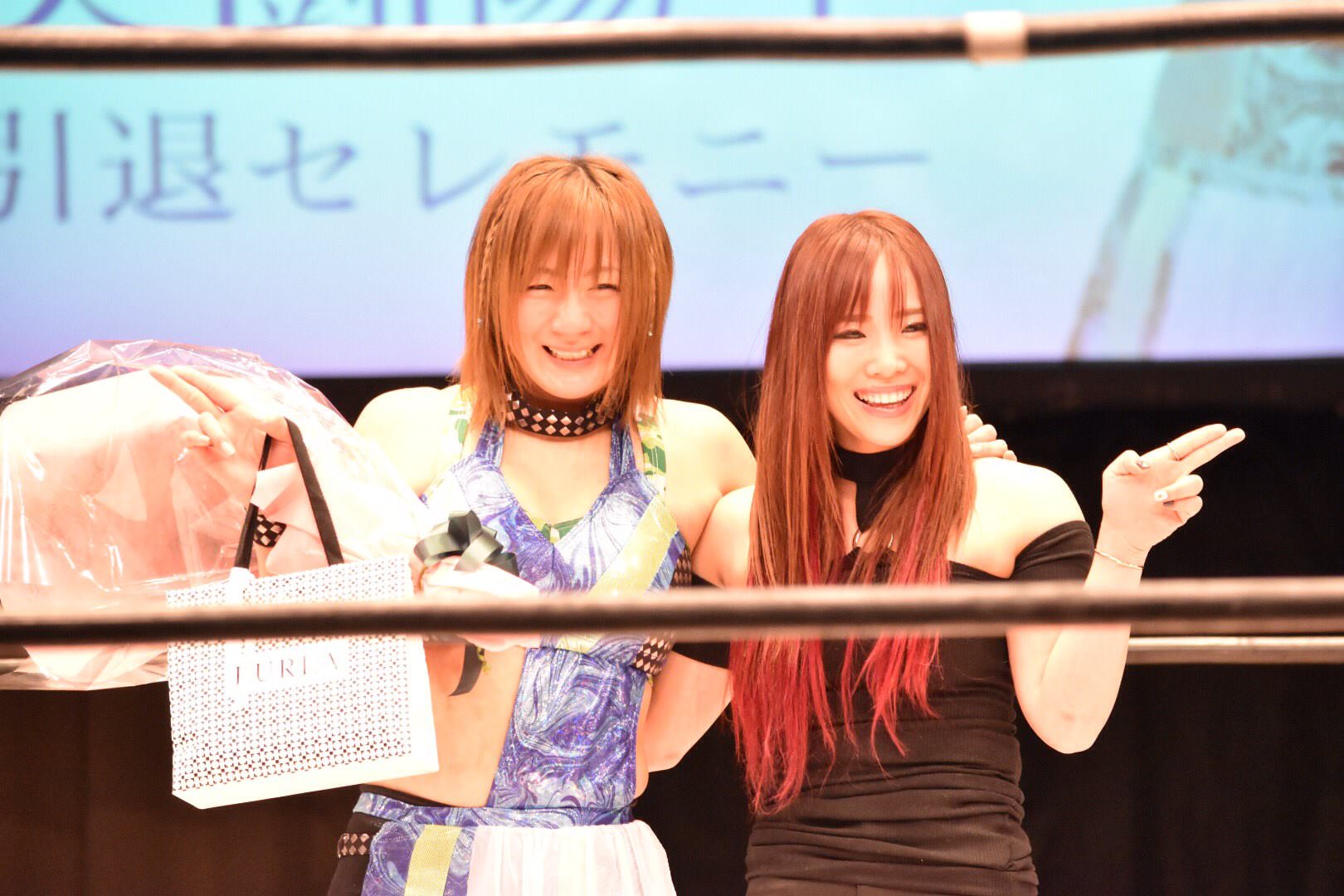 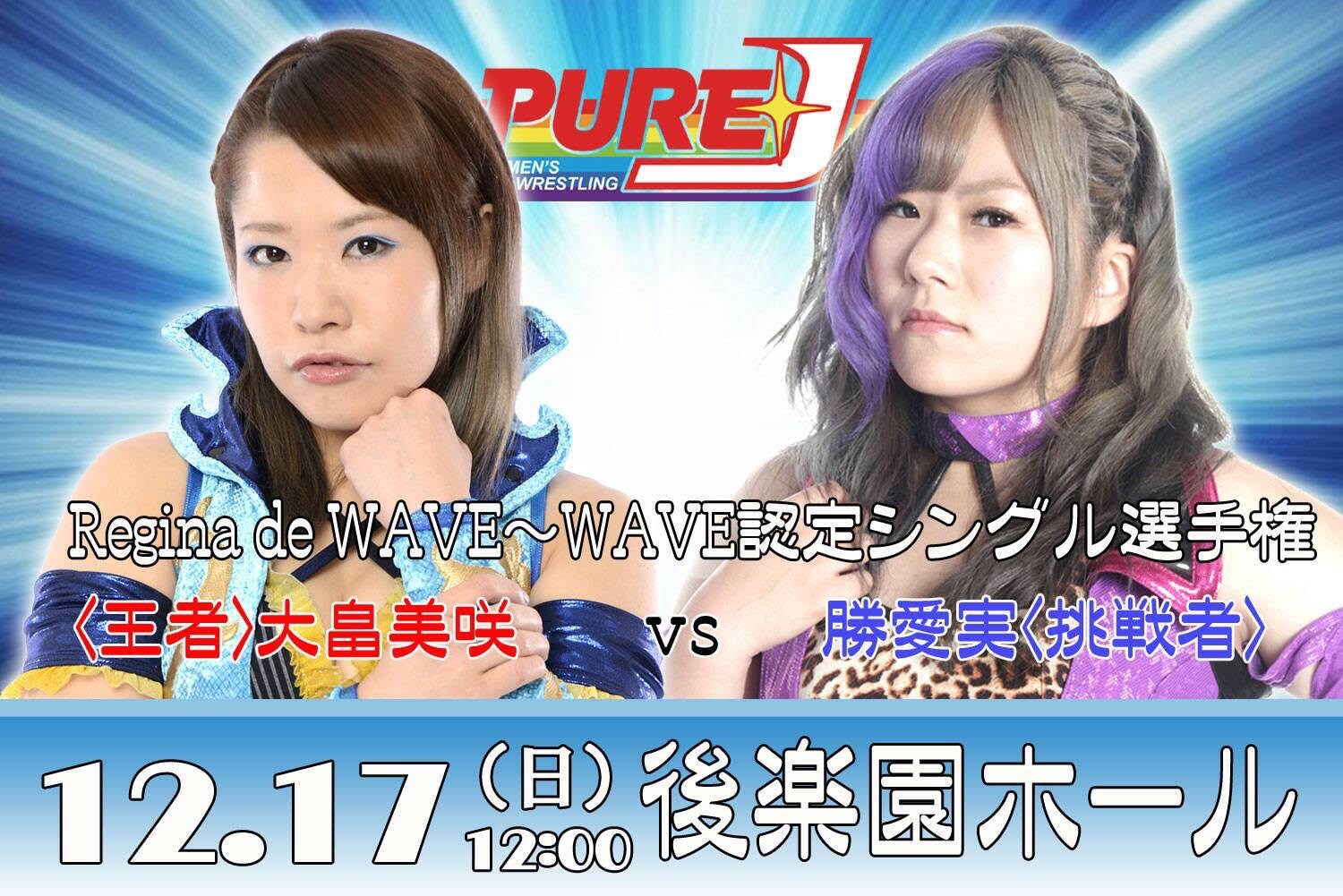 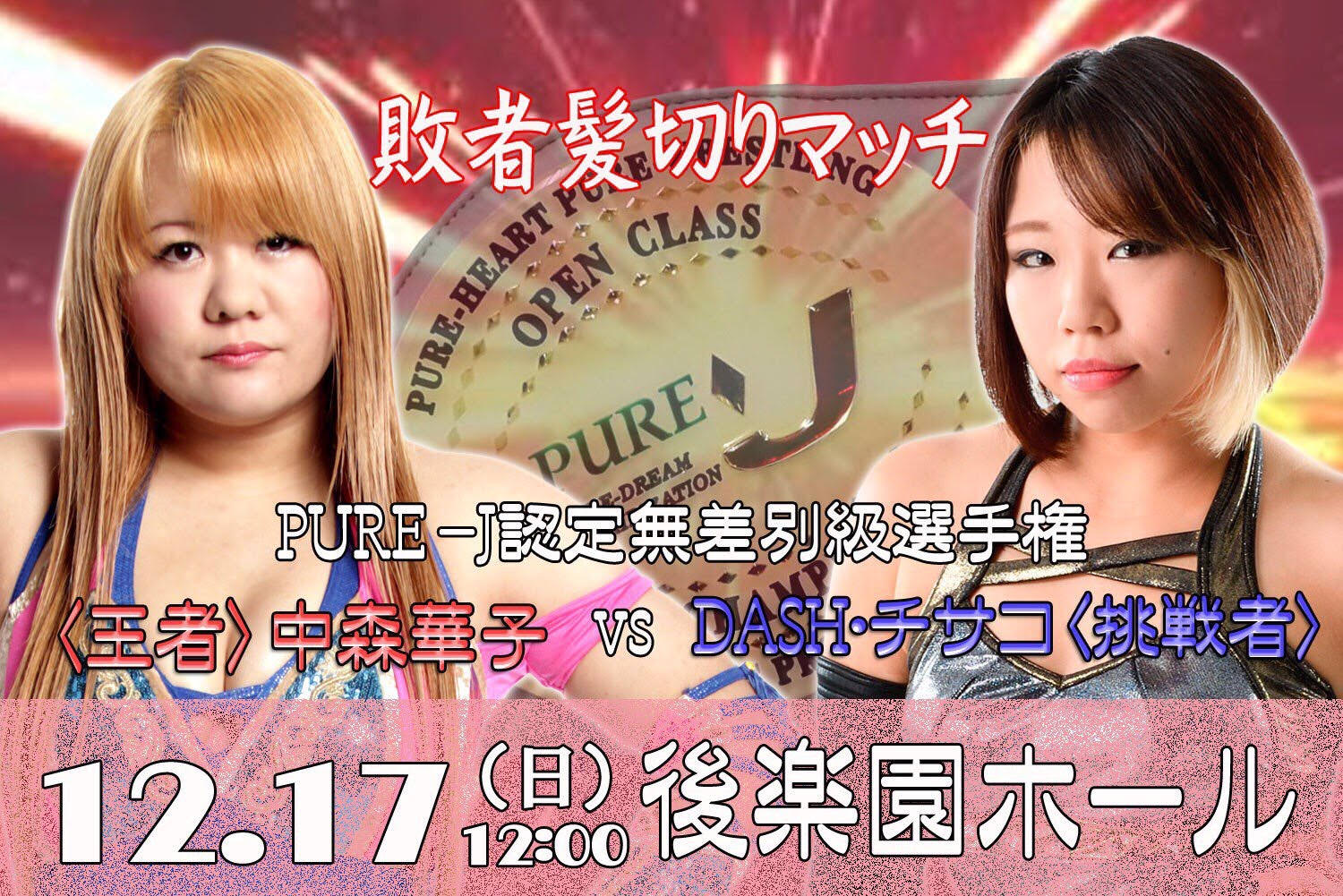 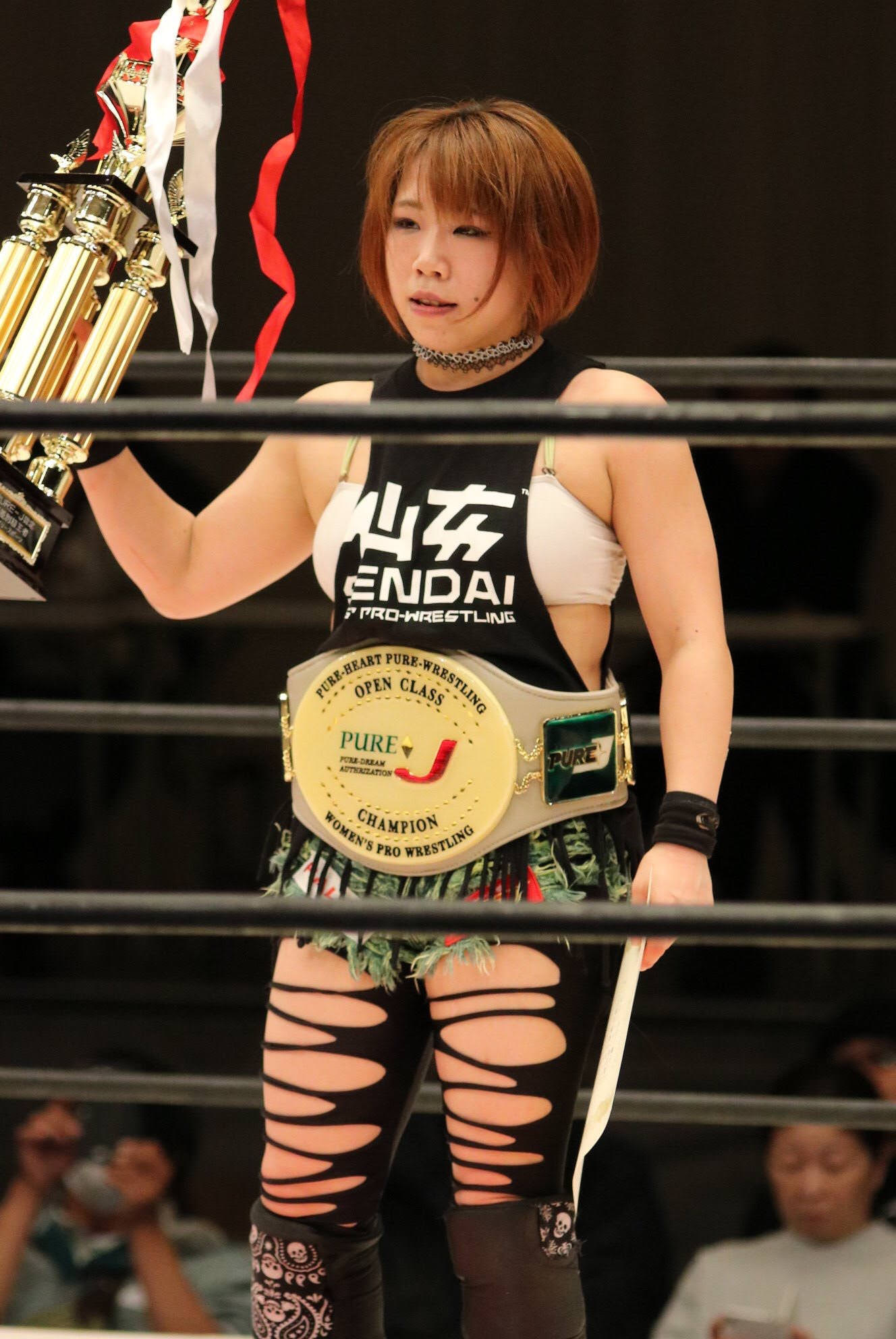 ~Nakamori’s head was shaved after the match.

(1) Hiromi Mimura vs Ruaka
♦Winner: Mimura (5:49) with La Magistral
(2) Hanan vs Konami
♦Winner: Konami (6:04) with the Konalock
(3) 3WAY Match: Mari Apache vs Starlight Kid vs Shiki Shibusawa
♦Winner: Starlight Kid (5:34) with a Hurricanrana on Mari
~Starlight Kid picks up a huge upset win over the High Speed Champion, and issued a challenge for the title. That match will take place on
(4) Kagetsu, Hana Kimura & Sumire Natsu vs Yoko Bito, Jungle Kyona & Natsuko Tora
♦Winner: Tora (16:33) via pinfall on Natsu
~More dissension was evident in Oedo Tai. All three members had harsh words for each other after the match.
~Jungle Kyona & Natsuko Tora issued a challenge for the tag titles, and Kagetsu accepted. That match will be on the 12/24 show at Korakuen Hall.
(5) 8-Woman Elimination Tag Match: Kelly Klein, Bea Priestley, Chardonnay & Scarlett vs Io Shirai, HZK, Momo Watanabe & AZM
Elimination Order:
~AZM (9:26) following a Swinging Neckbreaker Drop from Priestley
~HZK (10:02) via OTR, Priestley
~Priestley (10:07) via OTR, Io
~ Scarlett (12:59) via pinfall by Watanabe
~Chardonnay (16:17) following a Package German Suplex from Io
~Io (18:13) via OTR, Klein
♦Winner: Klein (20:39) with the K Power on Watanabe
~Kelly Klein vowed to take Io’s Wonder of Stardom Championship. Io warned her not to get too cocky just because of her victory in the elimination match. 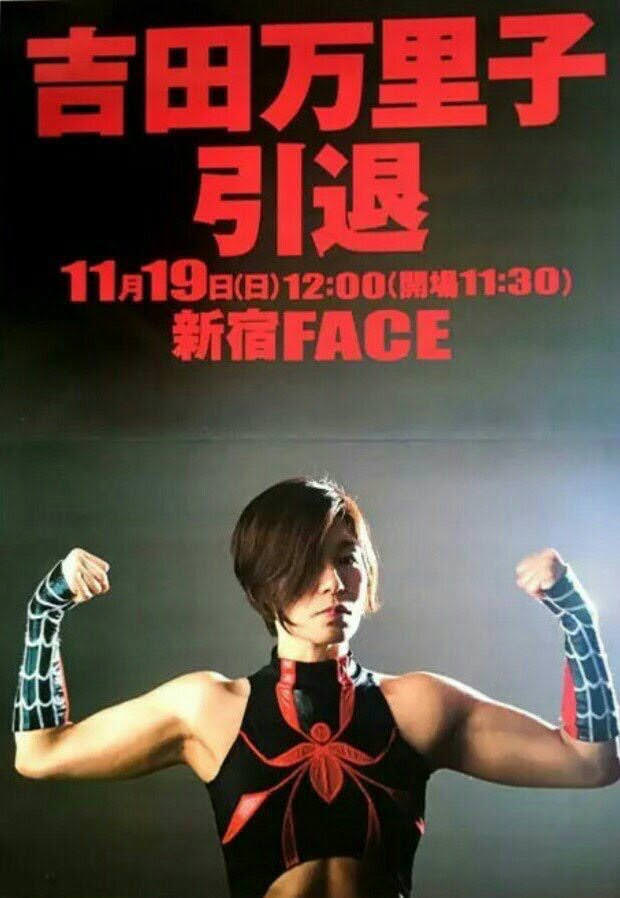 (1) Jaguar Yokota, Kaoru Ito & Debbie Malenko vs Mariko Yoshida, Kyoko Inoue & Takako Inoue
♦Winner: Yoshida (12:51) with the Spider Twist on Malenko
(2) Aja Kong, AKINO & Mari Apache vs Mariko Yoshida, Leon & Melissa
♦Winner: AKINO (10:17) with a Frankensteiner on Leon
~Following the match, AKINO issued a challenge to Leon & Command Bolshoi for the Daily Sports Women’s Tag Championship at the 12/17 PURE-J show, and named Mari Apache as her partner for the match.
(3) Gold Kids Memorial Match: Akiko Iijima vs Kotone Narikuni
♦Winner: Narikuni () via pinfall
(4) Bambi & Cherry vs Misaki Ohata & Aoi Kizuki
♦Winner: Ohata (9:22) with the Solarina on Cherry
(5) Mariko Yoshida Retirement Match: Mariko Yoshida vs Hiroyo Matsumoto
♦Winner: Matsumoto (19:00) with the Rock Drop
~Everyone who participated in the show came into the ring to honor the 29-year veteran in her retirement.

(1) 3WAY Match: Starlight Kid vs Hanan vs Ruaka
♦Winner: Starlight Kid (5:48) with a Frog Splash on Ruaka
(2) Shiki Shibusawa vs Xia Brookside
♦Winner: Brookside (5:14) with a Leg Roll Clutch
(3) Mari Apache & Hiromi Mimura vs Yoko Bito & Konami
♦Winner: Bito (10:19) with the B Driver on Mimura
(4) Takumi Iroha & Rin Kadokura (both Marvelous) vs Jungle Kyona & Natsuko Tora
♦Winner: Iroha (14:35) with the Swanton Bomb on Tora
~Yoko Bito came to the ring after the match and confronted Iroha. The two challenged each other to a match, and it will take place on the 10/17 Korakuen Hall show for the Wonder of Stardom Championship.
(5) Io Shirai, HZK & AZM vs Kagetsu, Hana Kimura & Tam Nakano
♦Winner: Kimura (15:19) with the Ground Manjigatame on AZM
~Following the match, Hana challenged Io to a singles match, and HZK challenged Kagetsu. AZM also challenged Tam, but Tam said she would take some time off to rest, but would be in Hana and Kagetsu’s corner for their matches.
~Io & HZK announced their entry into the upcoming Tag League.
~Jungle Kyona & Natsuko Tora were going to enter the Tag League together, until Yoko Bito asked Kyona to be her partner. Tora accepted the change and asked Shiki Shibusawa to be her new partner. Starlight Kid objected, having wanted to team with Shibusawa herself. However, she then asked her rival AZM to be her partner instead, and AZM accepted.
~Hiromi Mimura & Konami also entered themselves into the Tag League, and named their team “The Chibis.” 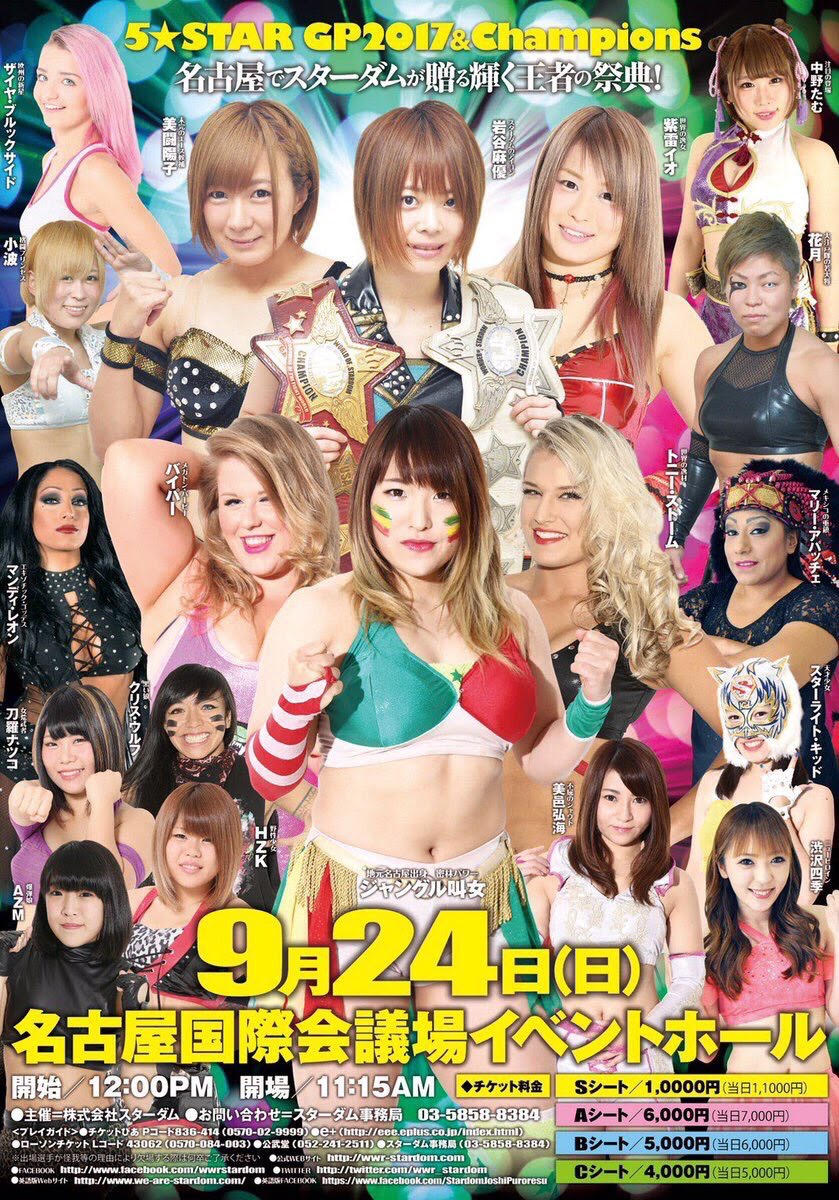 (6) World of Stardom Championship Match: [8th Champion] Mayu Iwatani vs [Challenger & 5★STAR GP Winner] Toni Storm
♦Winner: Storm (2:20) via referee stop
~Champion falls on her 3rd defense. Toni Storm becomes the 9th generation champion.
~Mayu was injured following a missed dropkick attempt, prompting the ref to stop the match, and was taken out on a stretcher. Mayu was taken to the hospital. Initially her condition was unclear, but Stardom has announced she suffered a dislocated elbow.
~Toni Storm said this was not how she wanted to win the title, and that she wants to face Mayu properly in a rematch sometime in the future.

(7) Wonder of Stardom Championship Match: [9th Champion] Mayu Iwatani vs [Challenger] Yoko Bito
♦Winner: Bito (14:45) with the B Driver
~Champion falls on her third defense. Yoko Bito becomes the 10th generation champion.
~Bito captures the Wonder of Stardom Championship for the first time in her career, but will have little time to rest or celebrate, as she will have her first title defense tomorrow against Jungle Kyona. 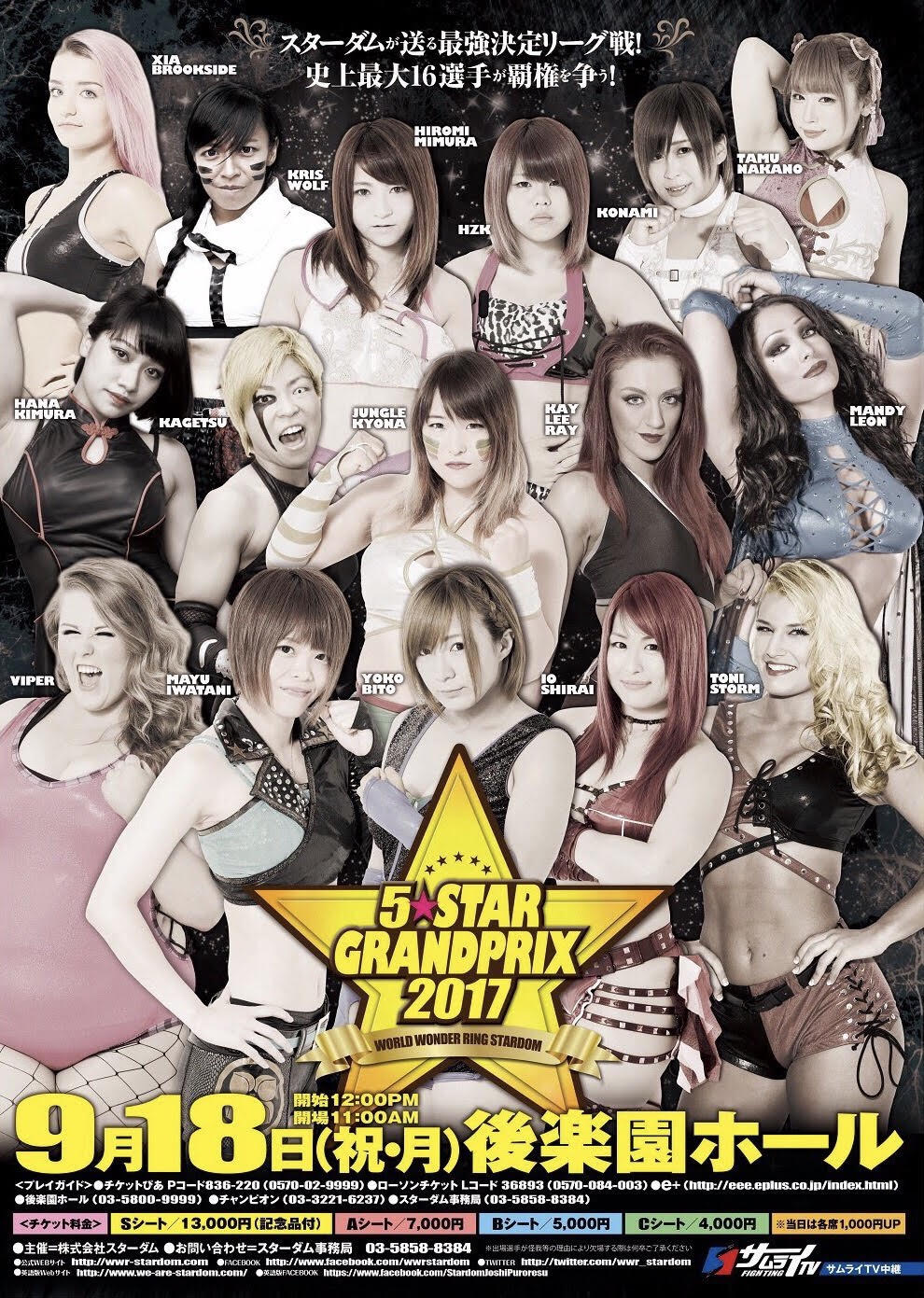 ~Toni Storm wins the Blue Stars Block and advances to the finals in the main event. 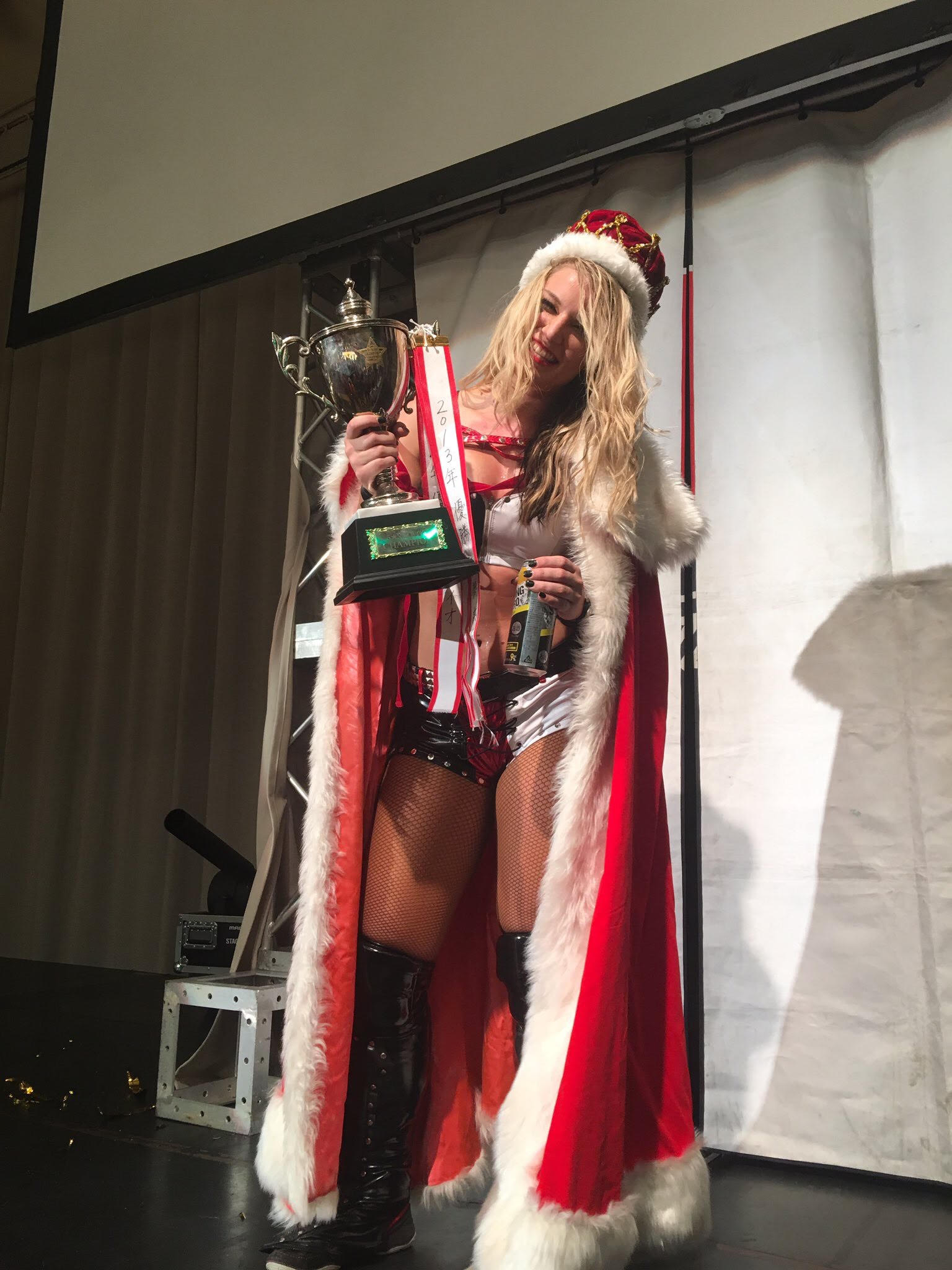 (5) 5★STAR GP Red Stars Block Match: Hana Kimura vs Viper
♦Winner: Viper (9:36) with a Senton
~Kimura [3 wins, 3 losses = 6 points]
~Viper [5 wins, 1 loss = 10 points]
~With the win, Viper is now tied with Mayu Iwatani for the lead in the Red Stars Block, though she holds the tiebreaker because of her victory over Mayu earlier in the tournament.

~The last remaining matches of the 5★STAR GP, including the finals, will take place on 9/18. Viper and Mayu Iwatani are the only two still in contention to win the Red Stars Block, while Toni Storm, Io Shirai, Kay Lee Ray and Mandy Leon all still have a chance to win the Blue Stars Block. 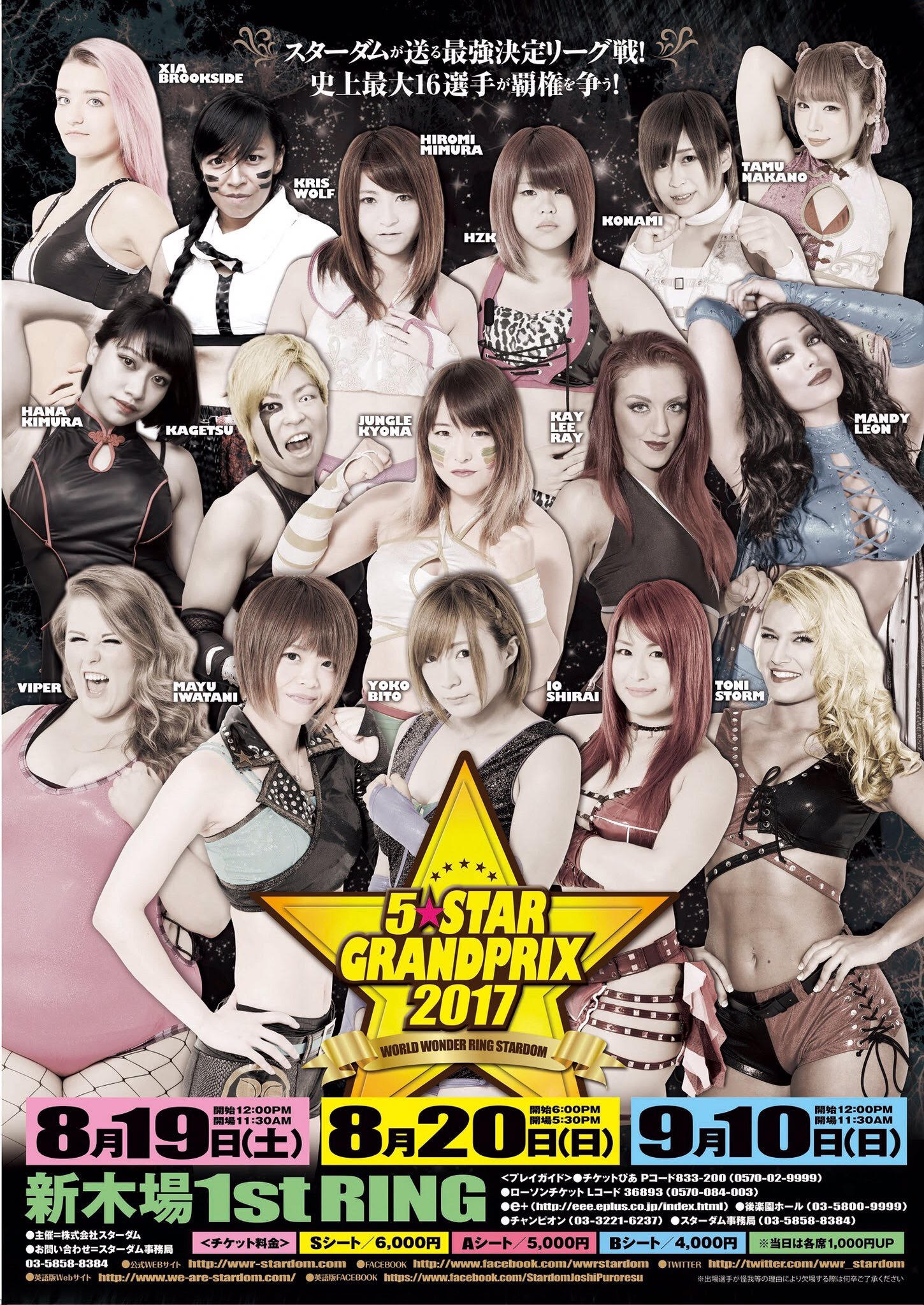