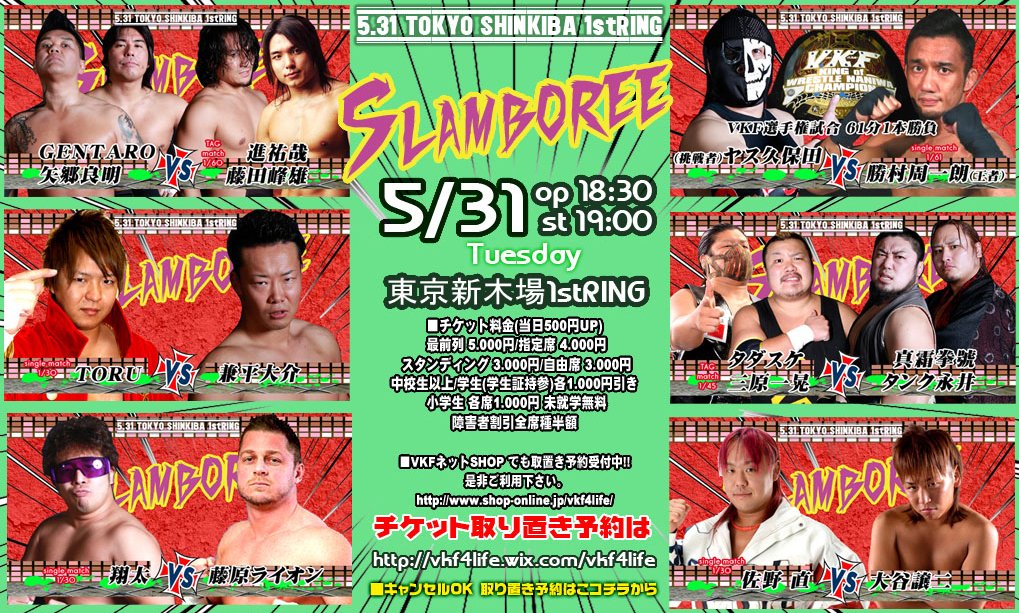 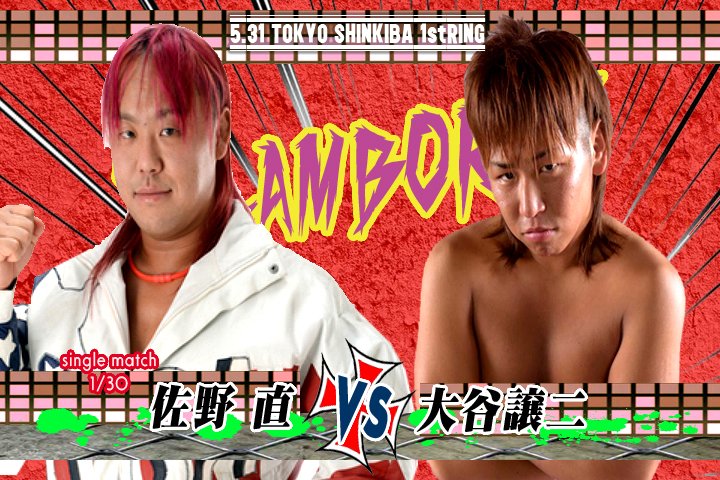 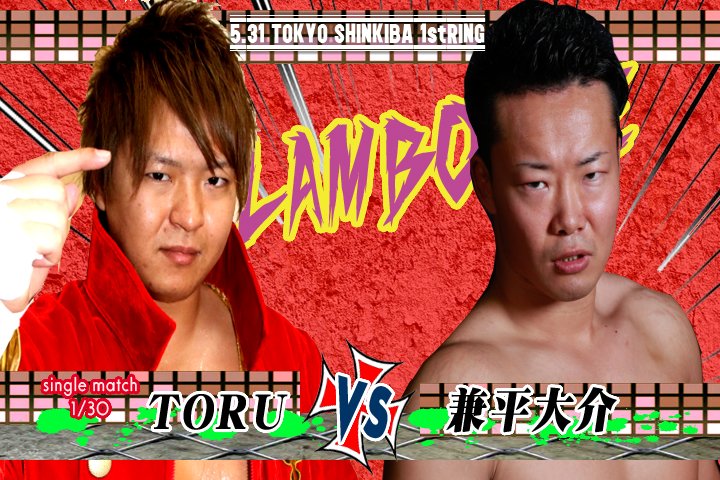 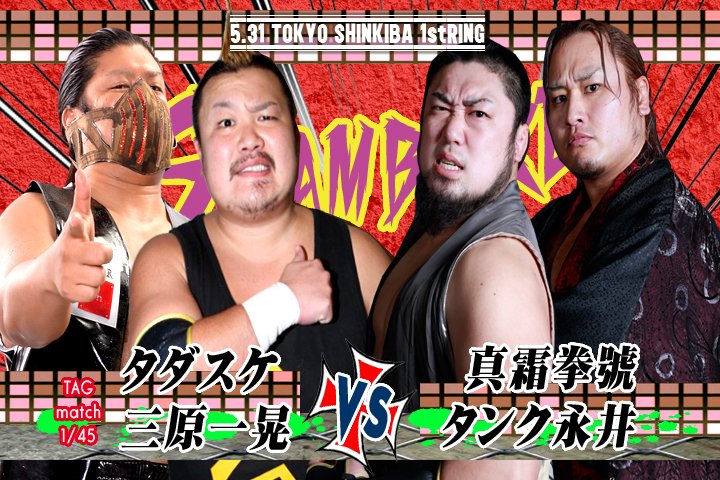 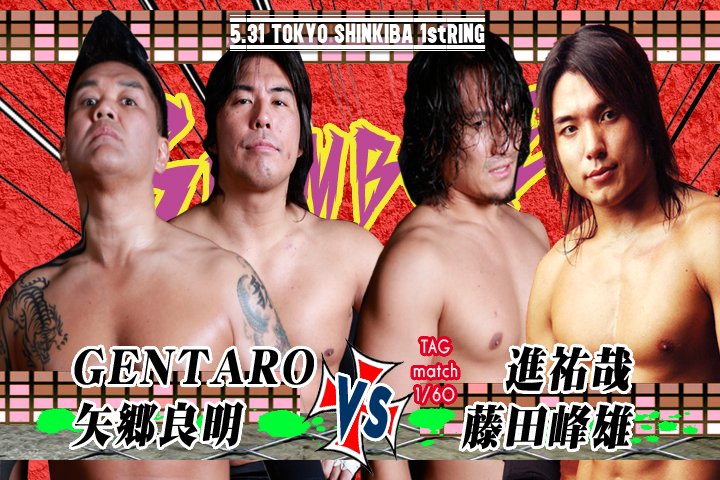 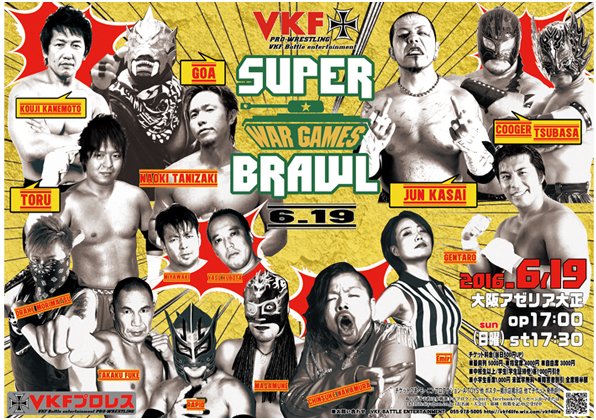 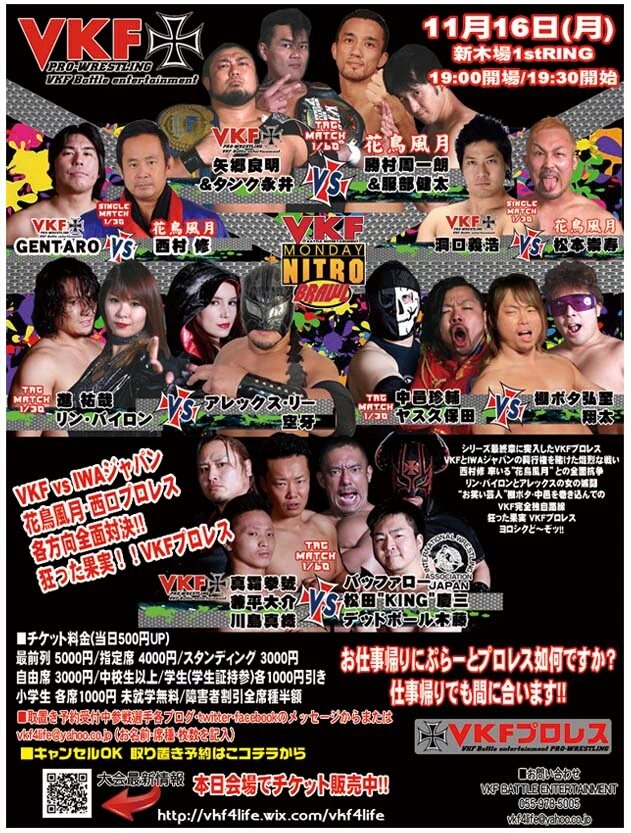 ~ The IWA Army, Matsuda, Kito, and Buffalo appeared apologized for the months of assaults against the VKF army. Matsuda declared that today’s show is an IWA Japan revival. (Though it is VKF show, they believe they are running things.)

(5) IWA Army vs VKF Army: Buffalo, Keizo “KING” Matsuda & Yuji “Deadball” Kito vs.  Yoshiaki Yago, Kengo Mashimo & Mao Kawashima [Kachofugetsu]
◆Winner: Kawashima (11:36) with a Small Package Hold on Matsuda.
~ The IWA banner appeared over the entrance screen throughout the course of the match.
~ The IWA Army was stunned at the loss, let alone to the rookie Kawashima.
~ Osamu Nishimura came out to the ring, advisor for Kachofugetsu promotion, as he stated he looks forward for two promotions working together in the future.
~ Yago stated that he wants a match against Nishimura. 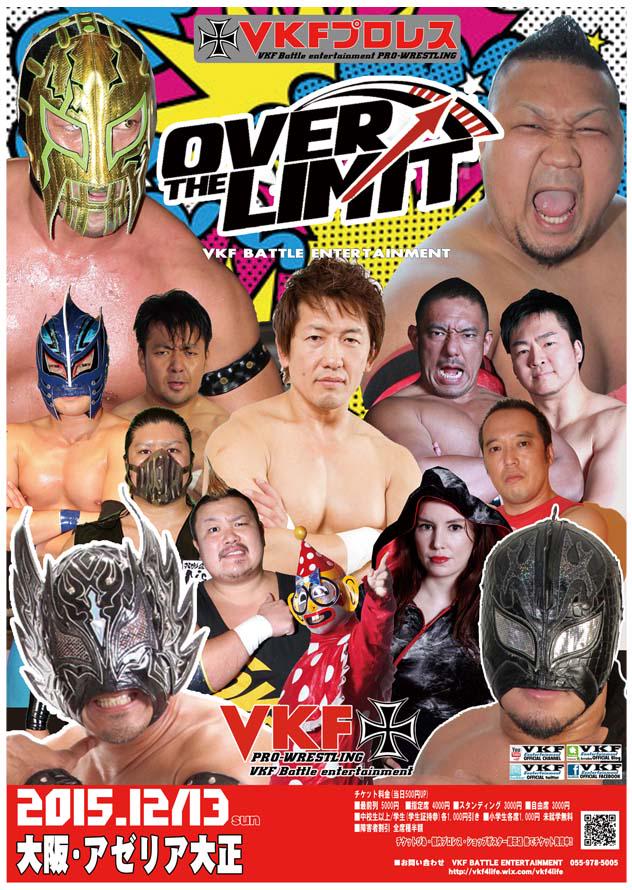 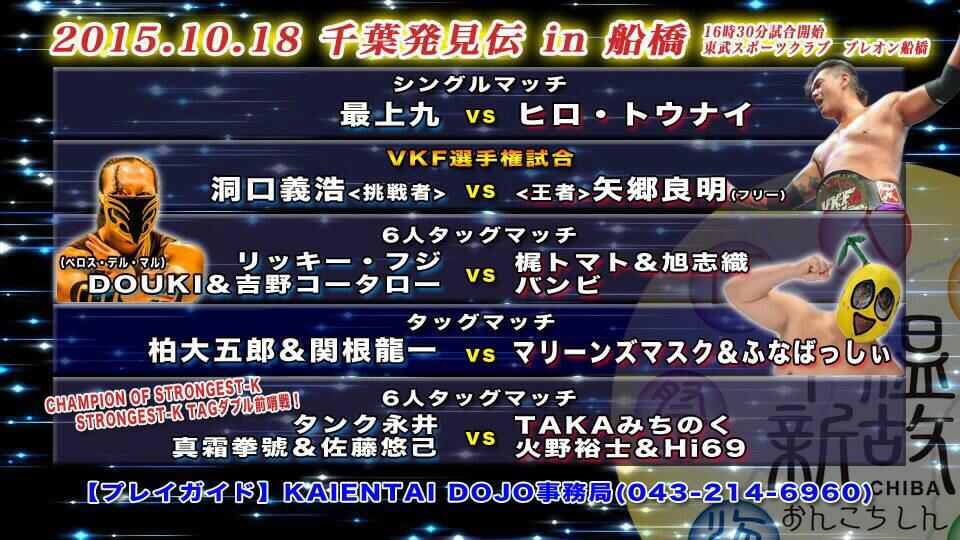 (3) Kaji Tomato, Shiori Asahi & Bambi vs. Ricky Fuji, Kotaro Yoshino & DOUKI [Perros del Mal]
◆Winner: Kaji (14:05) with the Speed on Yoshino.
~ Yuma and DOUKI agreed to an alliance as they have been added to the WEW Tag match on 11/1.
~ DOUKI also accepted a Magatsuki t-shirt as well as he appears to have joined the group as well. 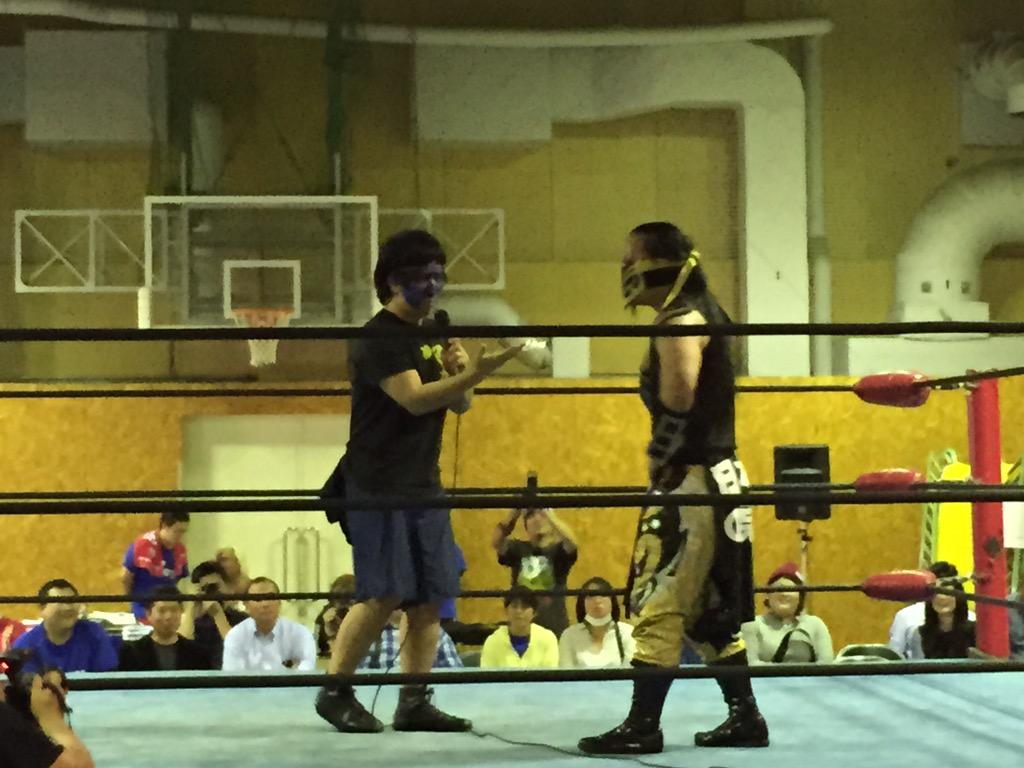 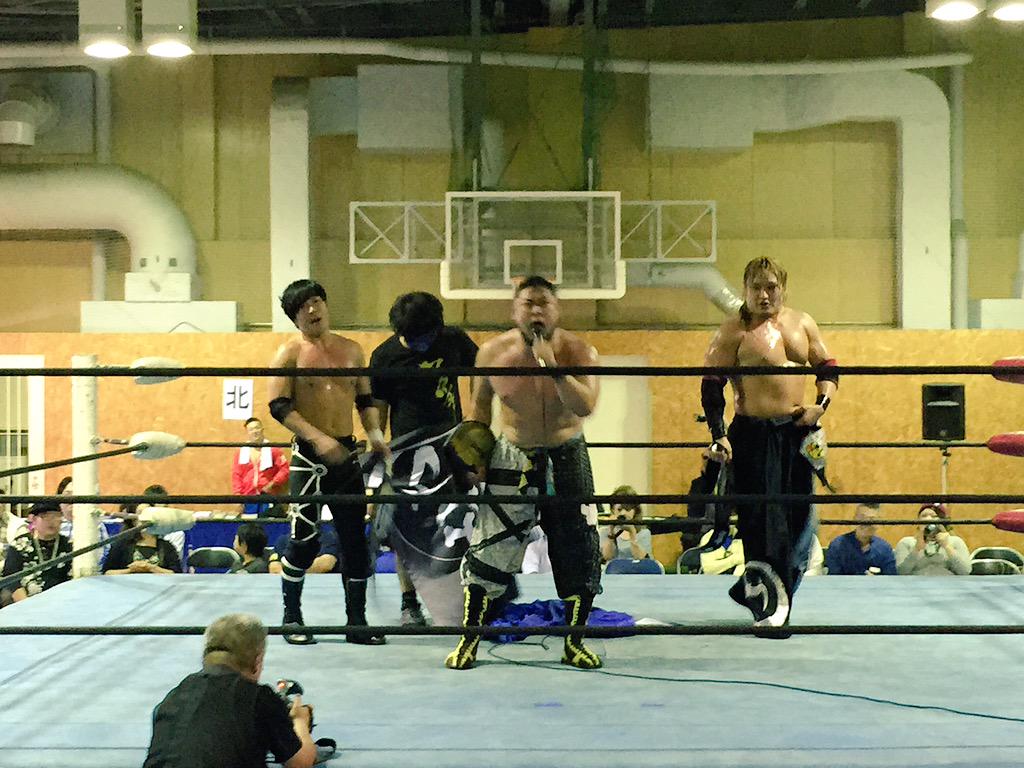 (5) Lin Byron [FREE] & GENTARO [FREEDOMS] vs. Alex Lee & Yoshiaki Yago
◆Winner: Byron (12:33) with a Moonsault Press on Yago.
~ Buffalo & Kito got involved setting up Yago to suffer the loss.
~ Yago challenged Matsuda to put the VKF belt on the line.

(4) Yoshiaki Yago & Tank Nagai [K-DOJO] vs. GENTARO [FREEDOMS] & Yasu Kubota [Sportiva]
◆Winner: GENTARO (17:12) with a Key Lock on Yago.
~ GENTARO made it known that he wants a singles match against Yago next.
~ Tank and Kubota will also have a match.

~ Kushinbo’s mask, which Josh O’Brien wore to the ring, was snatched and contained a note. The note stated that the next shows main will see Buffalo (Yamada) team with

(3) Kuishinbo Kamen vs. Golden Pine
◆Winner: Kuishinbo (11:47) with a Hurricanrana to School Boy.

(5) Shuri [WNC] & Eisa 8 [Okinawa] vs. Kyoko Kimura [Free] & Masaaki Mochizuki [DG]
◆Winner: Mochizuki (12:23) following the Twister to Eisa.
~ The young Eisa was able to throw some shots back at Mochizuki. But in the end the veteran was able to put him away with his patented kicks then the Twister brainbuster.

(6) Kengo Mashimo [K-DOJO] & KAZMA SAKAMOTO [Free] vs. Masato Tanaka [ZERO1] & Ryoji Sai [ZERO1]
◆Winner: Tanaka (15:01) following the Sliding D to KAZMA.
~ Said to have been a big finish, lot’s of solid back and forth action throughout. KAZMA and Tanaka seemed to have the most heat going into the bout.

(7) VKF Championship Match: [2nd Champion] Yoshiaki Yago vs. [Challenger] KENSO
◆Winner: KENSO (14:40) following the Hagaure.
~ KENSO becomes the 3rd Champion.
~ GENTARO was in the ring as the special championship presenter for the match.

~ The Kubota Brothers ran into the ring after KENSO won the belt and a tag match was made. Kubota Brothers then surprised attacked their opponents before the match could get underway.