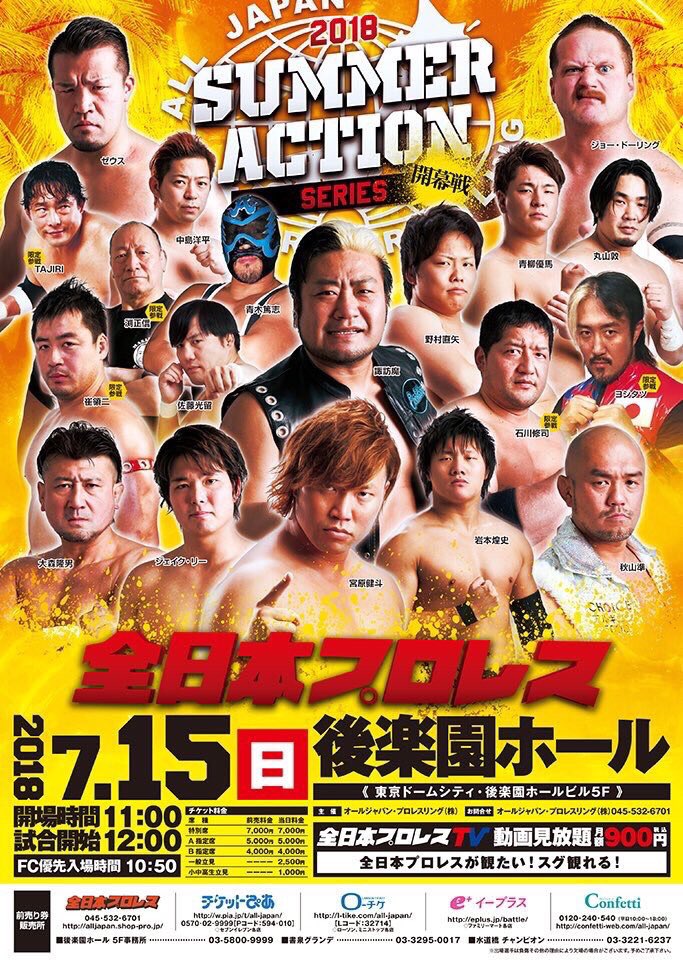 ~ The first round matches were announced for September’s “Oudou Tournament 2018”.

(7) Kento Miyahara, Yoshitatsu (FREE) & Naoya Nomura vs. Zeus, Joe Doering & KAI (FREE)
◆Winner: Zeus (12:32) with a Jackhammer on Yoshitatsu.
~ Zeus with the prelude win over Miyahara’s team before the title challenge in Osaka on July 29th. 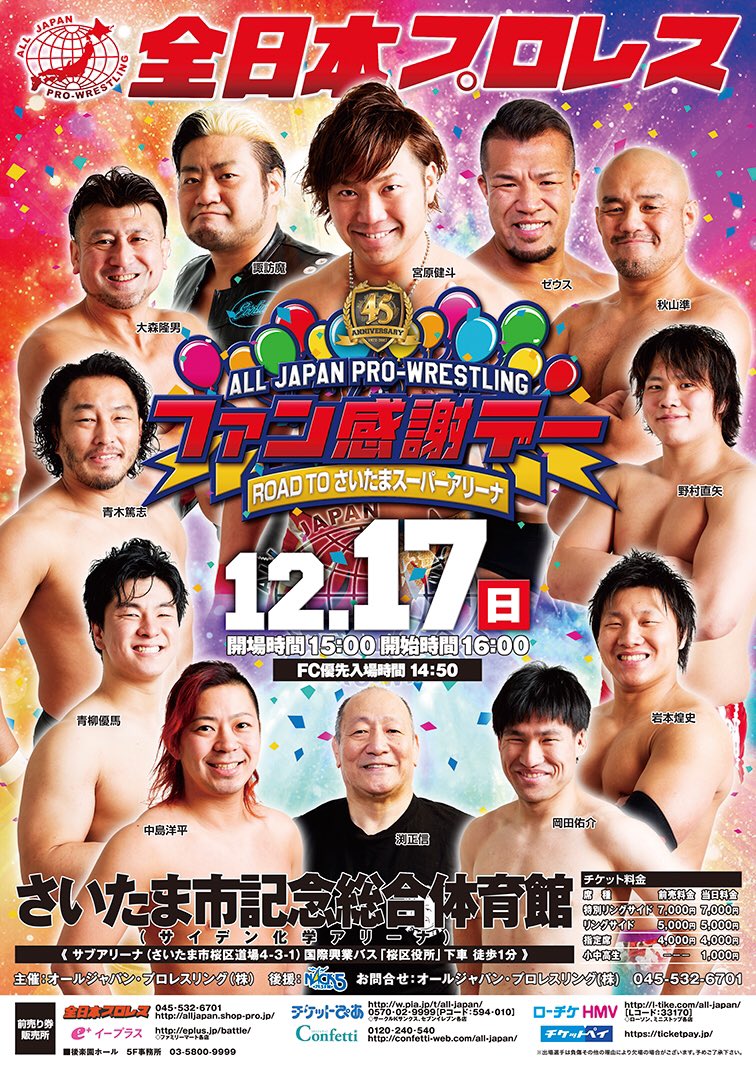 (5) World Junior Heavyweight Championship Match: [46th Champion] TAJIRI (FREE) vs. [Challenger] Atsushi Maruyama (FREE)
◆Winner: TAJIRI (9:00) with a Small Package Hold.
~ 2nd successful title defense.
~ TAJIRI will move on to defend the belt against Kotaro Suzuki on 1/2 at Korakuen.
~ Though with the upcoming match in front of him, TAJIRI stated that he aims for a defend the belt and take on Atsushi Aoki. Aoki appeared and made it known that he does indeed want a match against TAJIRI, as the two shook hands on it.

(6) Joe Doering vs. Naoya Nomura
◆Winner: Doering (7:54) with the Revolution Bomb.
~ The Triple Crown Champion with the dominant win as he holds his momentum heading into the title defense against Zeus in the coming New Year.

(7) Road to Saitama Super Arena: Suwama, Shuji Ishikawa [FREE] & Ryoji Sai [LAND’S END] vs. Kento Miyahara, Zeus & Yoshitatsu [FREE]
◆Winner: Zeus (23:44) with a Jackhammer on Sai.
~ Zeus claimed the much needed win over his recent rival as he now goes on to challenge Doering on 1/2.

[AJPW News] All Japan officially announced that the World Junior Heavyweight Championship will be defended on the November 1st show as Kotaro Suzuki defends against Atsushi Aoki. This match following the Oudou Road match on September 12th between the two in which Aoki picked up the win over the champion. This will also mark Kotaro’s sixth defense of the belt with his last defense being against Ultimo Dragon back on August 29th.

Then it was announced that Takafumi Ito and KEI Yamamiya, who will be competing on the 10/10 show against the rookies Naomura and Aoyagi, aim to continue competing in the AJPW in the future. The two pictured above made this known while training at the All Japan Dojo in Tokyo. The two men are highly skilled grapplers and have connections to Pancrase throughout their careers, Ito is currently under Pancrase-ism and KEI is currently under GRABAKA formerly of Pancrase. Ito of which just recently celebrated his 20th anniversary as an active competitor. Ito has competed in ZERO1, most notably, in the past and stated that he is confident is his pro-wrestling abilities. KEI is a former Light-heavyweight King of Pancrase and as of the November 7th Hard Hit, events now run by Hikaru Sato, show he has competed in 100 mixed martial art fights. The two look to bring their unique sets of skills and talents to the All Japan.

[DDT News] Following the dissolution of UNION this past weekend, Isami Kodaka held a press conference to formally announced that he indeed be establishing his own promotion. The new promotion will be known as “Pro-Wrestling BASARA” and its first official show will be held on January 21st at the Shinjuku FACE in Tokyo.

Of the former UNION talent GM Tsurumi Amon announced that Seiya Morohashi, Cherry, and LadyBeard will become active members of DDT itself.
Yusuke Kubo will halt his pro-wrestling career once more as well as he remains active on DDT’s video team.
Masayuki Mitomi will become a freelance wrestler and he is already connected to Rion Mizuki and MIKAMI’s Kabuki-cho promotion.

That leaves, pictured above, Daichi Kazato, SAGAT,  Isami Kodaka, Ryuma Go, Hiroshi Fukuda, and FUMA (not present) as the six official members as of this time.
Isami stated that he aims to bring his attitude fully into the promotion as he is looking to change the landscape in the wake of UNION’s demise. Isami also made it known that, unlike UNION, he plans to hold more shows regularly as well.

(5) Akebono & Naoya Nomura vs. Shuji Ishikawa & Hiroshi Fukuda [both UNION]
◆Winner: Shuji (10:30) following a Running Knee on Nomura.
~ Shuji and Akebono once more had a stare-down with one another following the match.

(7) Xceed vs Evolution Showdown Captain Fall Match: Go Shiozaki, Kento Miyahara & Yohei Nakajima vs. Suwama, Joe Doering & Atsushi Aoki
◆Winner: Aoki (19:02) with the Assault Point on Shiozaki.
~ Aoki with a big win over the former Triple Crown champion and current World Tag Champion.
~ Aoki made it known that he wants a shot at the World Tag belts, his partner being Doering.
~ The World Tag match has been set for July 25th.

[AJPW News] All Japan announced the title matches that will be taking place in March.

Up first on March 14, KENSO will be defending the GAORA TV belt against Hikaru Sato. Hikaru has earned this title challenge after picking up a win over KENSO back on January 24th.

Then on March 22 will see both of the tag belts in defense. The Asia Tag belts will be on the line as Nagai and Minamino put them on the line against the veteran junior alliance of Kanemaru and Ultimo Dragon. Kanemaru calling out Minamino on the 2/20 show. Then the World Tag belts will be defended as “Wild Burning” Akiyama and Omori take on the super-heavyweight combination of Akebono and Yoshie.

Then on March 27 the World Junior and Triple Crown belts will be defended. The World Junior will see Atsushi Aoki and Kotaro Suzuki facing off in a rematch following the final match of the Jr. BATTLE OF GLORY. Kotaro claimed the victory for the second year in a row and a rematch has now been decided with the belt on the line. Kotaro has yet to hold the World Junior belt and this will mark the first time in 7 months that he has challenged for the belt. The the headlining match of the tour will feature Go Shiozaki putting the Triple Crown belt on the line against fellow Xceed teammate Kento Miyahara. This will mark Miyahara’s second ever challenge for the belt in which he claimed a win over the previous contender Zeus at the show on February 17th. Shiozaki accepted the challenge as he feels that Kento has earned this opportunity.

Fuchi was up first as he announced that Ultimo Dragon will be defending the World Junior belt at the Okinawa show on February 23. Ultimo will defending the belt against the winner of the Jr. BATTLE OF GLORY, or a self appointed challenger, if he happens to win the league himself.

Fuchi then announced that he will not be competing during the February tour as he will be undergoing cataract surgery on his right eye.

Jun Akiyama and Yoshinobu Kanemaru then came in as the newly crowned Asia Tag champs. Akiyama stated that that they will be looking to recruit any worthy challenger teams from other promotions in Japan. Currently the duo does not have a first defense in line, so Akiyama has taken it upon himself to open the doors for the “Asia” Tag belts to be defended across a broader playing field.
Yoshinobu Kanemaru then stated that he is looking towards being a dominant player in the Jr. League as he has swore to recapture the World Jr. belt from Ultimo Dragon.