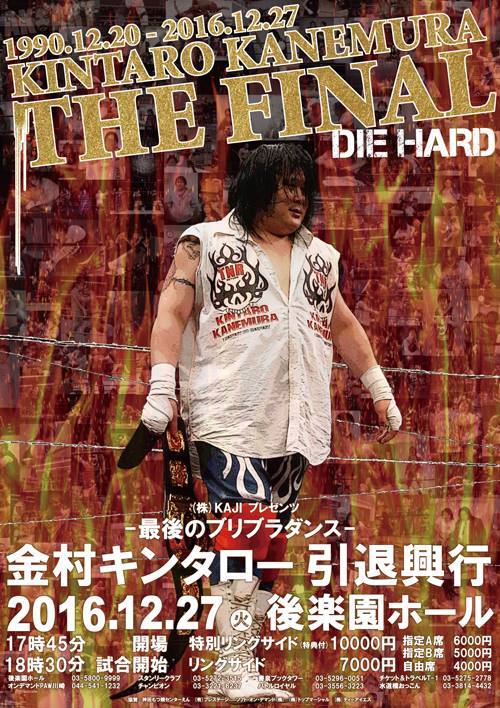 ~ Atsushi Onita came out on crutches to as the two showed their final respects. Onita apologized for being unable to compete today.
~ Tanaka and Kuroda came back into the ring as they took part in a final trademark dance with Kanemura.
~ Kanemura bid farewell to the fans as he respectfully ends his career after 26 years of competing in the ring.

~ Kanemura has been an active pro-wrestling since 1990 and became famous for matches, more notably death matches, in W★ING and FMW throughout the mid-90’s. He helped form the Apache Pro-Wrestling Army (in 2004) following the demise of FMW in 2002. He leaves the ring as the last WEW Champion which will be sealed away with is retirement. 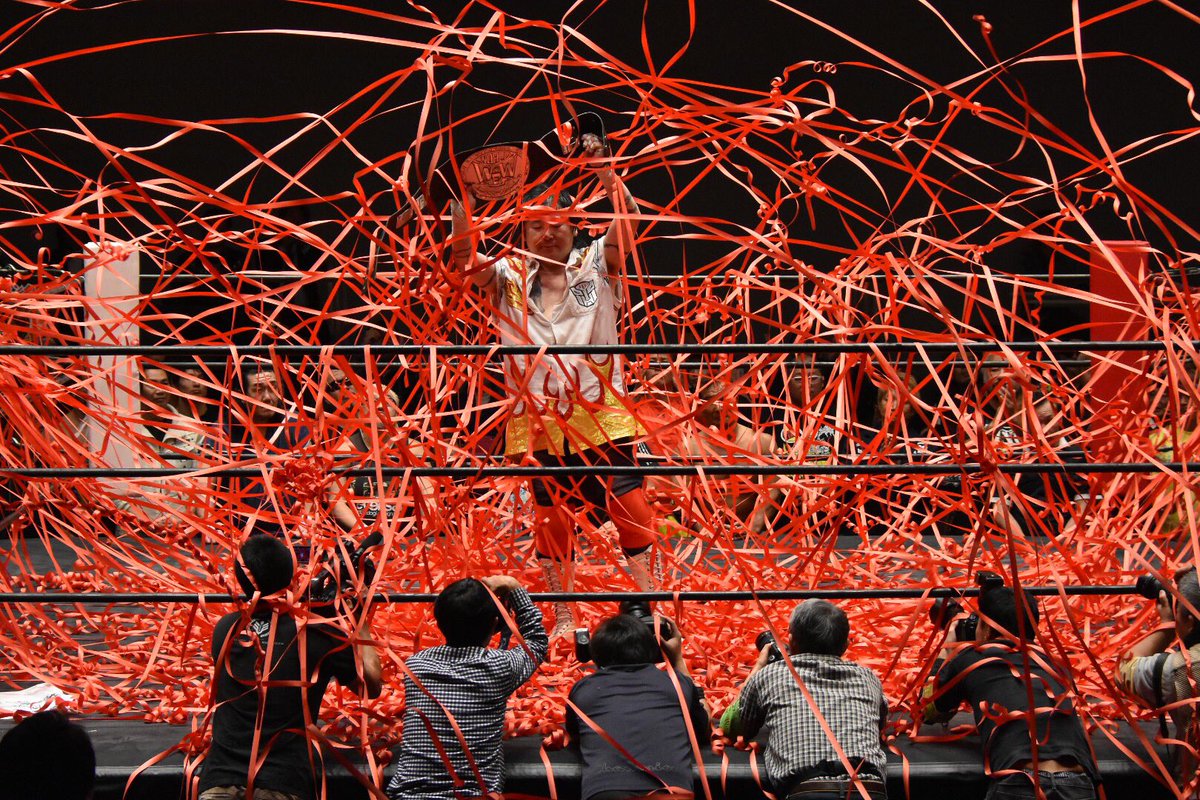 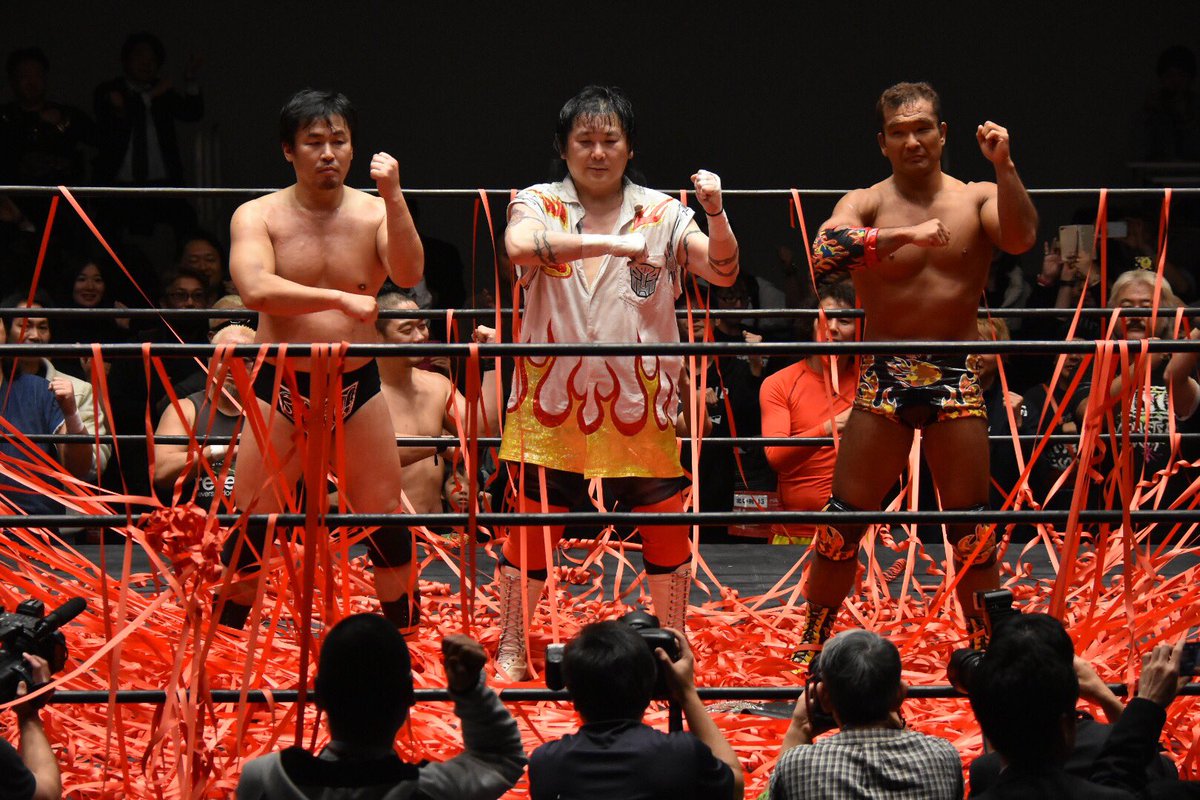 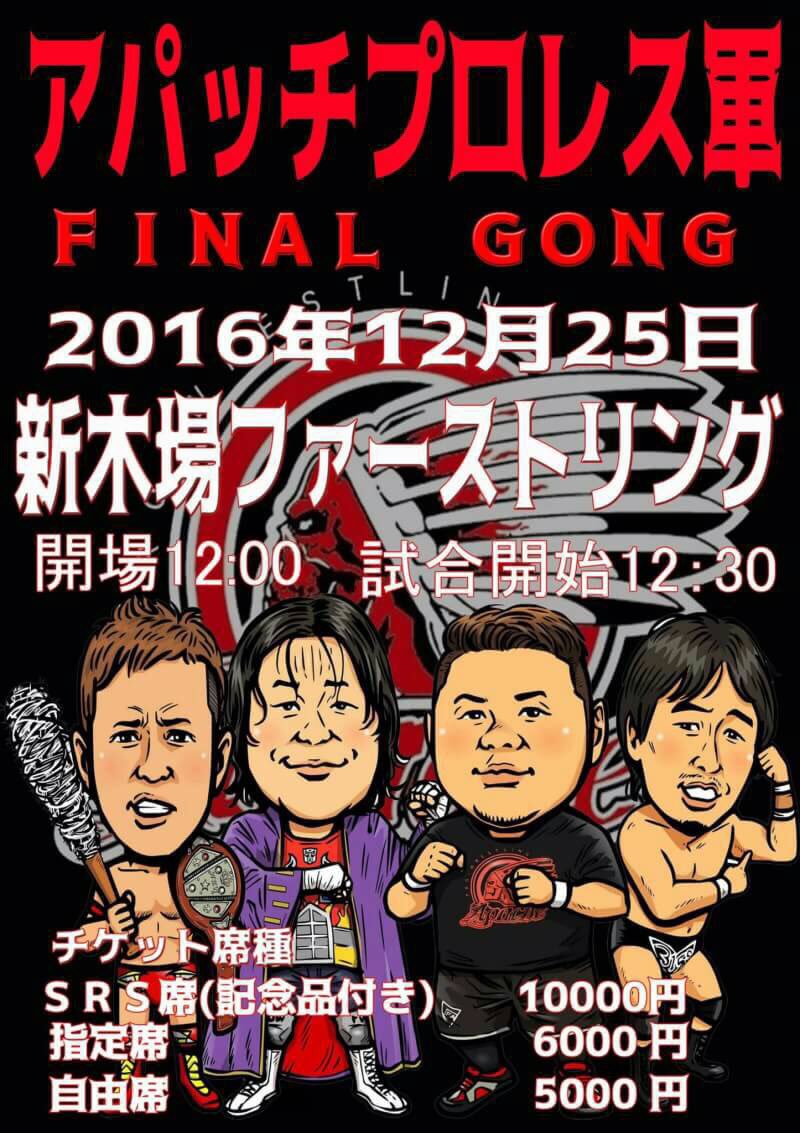 ~ Tetsuhiro Kuroda and HASEGAWA announced that new promotion will be formed in 2017. Which is currently being dubbed as “A Team”. Their first show is expected to be held on April 16 at the Kitasenju Theater 1010 in Tokyo.
~ HASEGAWA stated that the WEW Heavyweight belt will be sealed with Kanemura as the final champion to hold the belt. As he will be retiring from pro-wrestling on the 27th. Though the WEW Tag belts will continue to be contested with the formation of the new group.

~ Some updates were made to the upcoming AAA show at the Korakuen Hall on October 26. El Hijo del Fantasma was announced to replace Jack Evans on the show as he will team with Angelico to take on the ZERO1 team of Masato Tanaka and Ikuto Hidaka. 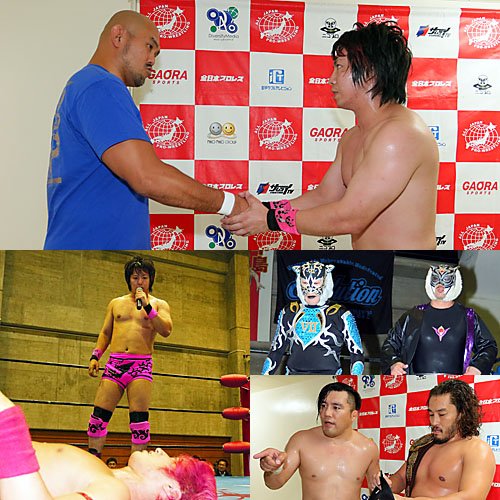 ~ Keisuke Ishii has asserted himself as the next challenger for the World Junior belt, which is held by his former tag partner in Soma Takao. A date for the title match has not been signed at this time. 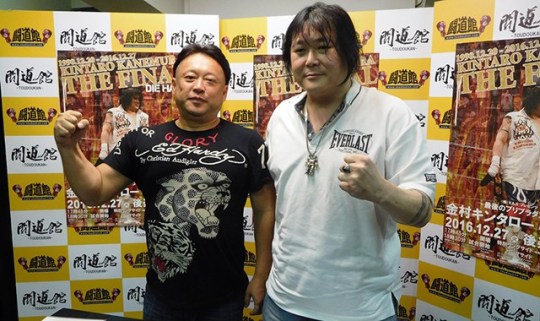 ~ Kintaro Kanemura announced that he wants his retirement match on December 27 at Korakuen to see him teaming with Masato Tanaka and Tetsuhiro Kuroda to take on the team of Kohei Sato, Daisuke Sekimoto, and Shingo Takagi. Nothing has been made official at this time, but it seems the 46 year wants to go out with one a final bang.

~ The full event card was announced for the October 31 show at Korakuen which will feature the finals of the “Saikyo Tag League”. 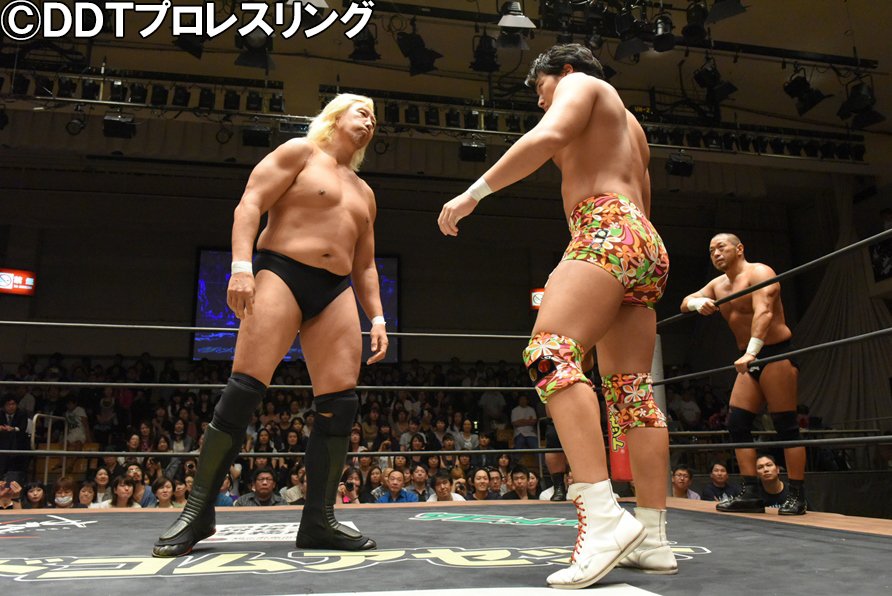 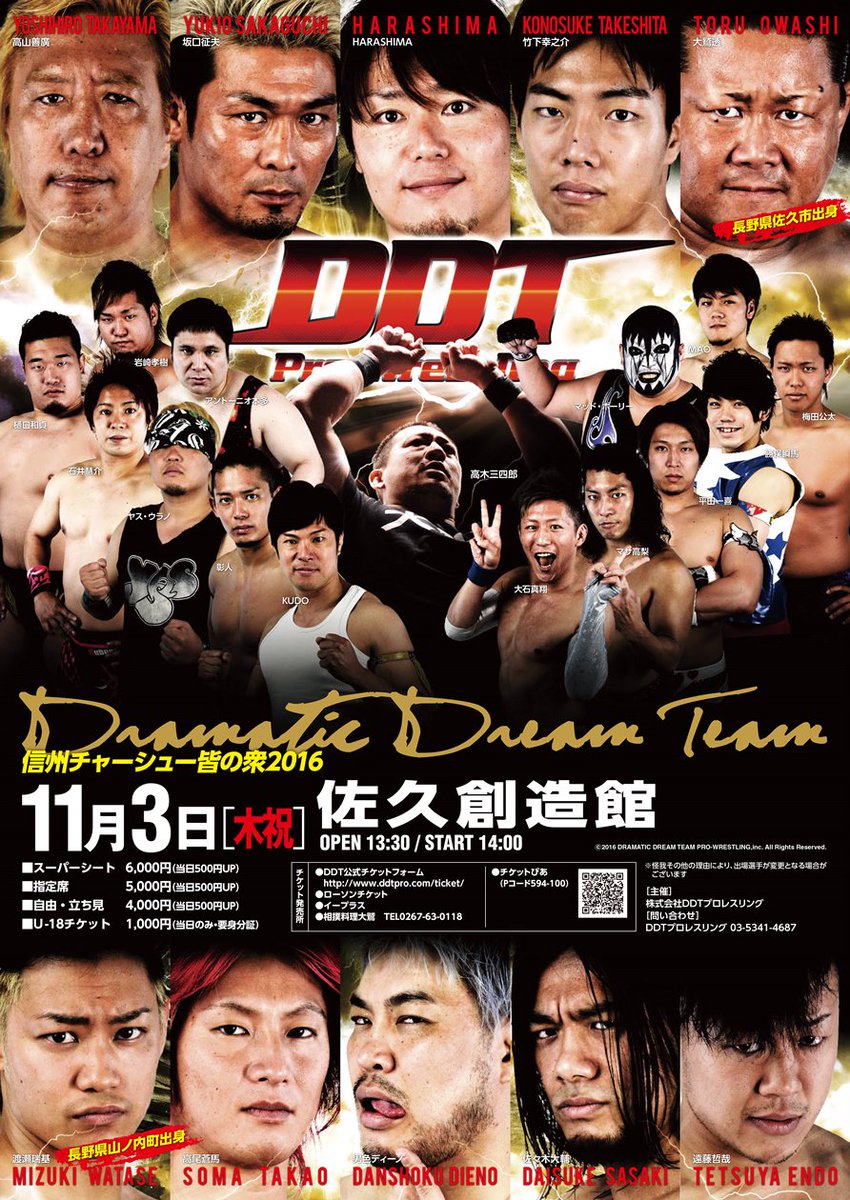 ~ The KFC Tag belts will be defended on the October 30 show as Susumu and HAYATA take on the Mexican deathmatch team of Violento Jack and Meido Xtremo. ~ The UN Heavyweight belt was announced to be in defense on the November 6 show as Buffa defends against the team of KAMIKAZE and Hartley Jackson. This show of course will be Kohei Sato’s 15th anniversary show.

(5) WEW Heavyweight Championship Match: [13th Champion] Koji Kanemoto vs. [Challenger] Hi69
◆Winner: Kanemoto (21:02) with an Ankle Hold.
~ 2nd successful title defense.
~ Tomohiko Hashimoto challenged for the belt, but it was decided that Kanemura will be receiving the last title challenge on the final Apache show on 12/25. 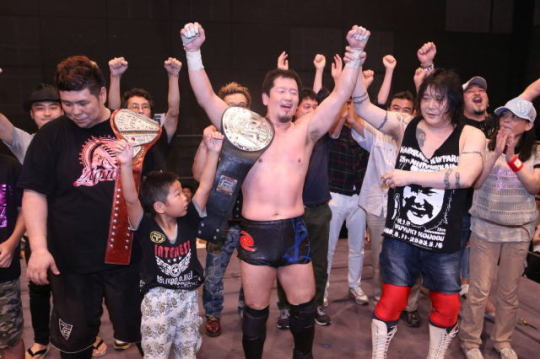 ~ Only two more shows remain before the promotion closes indefinitely after Kanemura’s retirement at the end of the year. 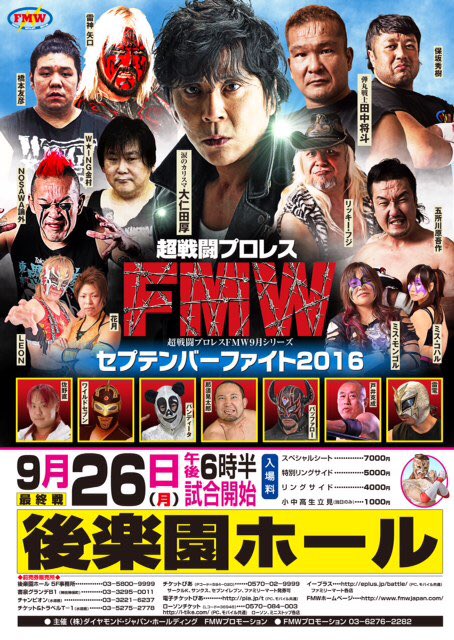 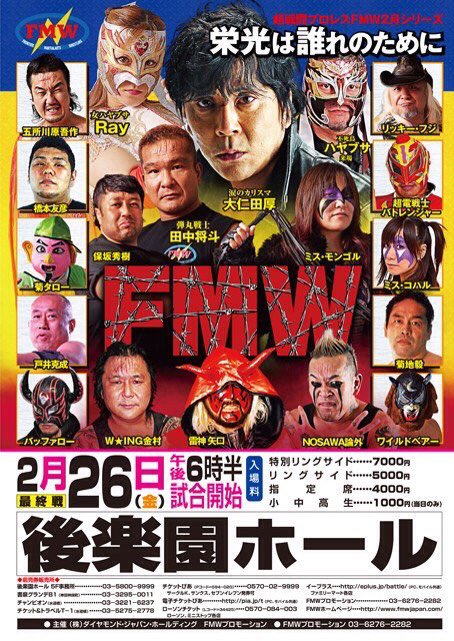 Kintaro W★ING Kanemura officially announced that he will be retiring from pro-wrestling in 2016. Kanemura made this news public to the press today, 11/26.

Kanemura stated that his body is fairly tattered and he is suffering from numbness in his left knee and leg. Kanemura has been active in deathmatches for over 20 years now and it is more or less time catching up with him.

Kanemura stated that he is focused on competing for Apache Army on January 31st in which he hopes to be the beginning of the road towards his retirement in December of 2016. He will then be undergoing a scheduled evaluation in which he will formally announce all intentions following those results.

He said that he has “no regrets” for all that he has done throughout his career. Though he does want one last Electric Current Blast Death Match against Atsushi Onita before he officially signals the end of his career.

As for others that he wants to be in the ring with one last time he mentioned Masato Tanaka, Tetsuhiro Kuroda, Kohei Sato, Daisuke Sekimoto, TAJIRI, Super Crazy, and even DG’s Shingo Takagi.

Kanemura made his debut on December 20, 1990 for Pioneer Senshi against Akitoshi Saito. He then found his home in W★ING a year later where he also came into connection with FMW. After the fall of FMW, he would move to WEW and then Apache Army. Kanemura has suffered his fair share of ups and downs throughout his career, but hopes to end his career on a high note doing what he has loved to do over the last 25 years.

[RJPW News] More matches have been announced for the next show on December 9th with the inclusion of AJPW’s Evolution team of Suwama & Hikaru Sato taking on the team of Super Tiger and Alexander Otsuka.

Suwama and Super Tiger, originally posted on the Fb page on 11/27.

Super Tiger put forth a challenge to an All Japan wrestler to come forward at this show which All Japan’s leading powerhouse heavyweight accepted the offer. He will be teaming with his fellow Evolution teammate Hikaru Sato. Super Tiger stated that he is fully prepared for the match as he aims to build himself back up following the loss to Masakatsu Funaki on September 18th. Tiger will be teaming with Alexander Otsuka in what he hopes to be a strong clashing of styles for the Real Japan ring.

Suwama stated that he is open to building an outside relationship from All Japan in hopes of offering others an opportunity to come to All Japan as well. Suwama stated that this will be a major step in doing so as he is looking forward to any and all challenges that may lay ahead.

First up Soya will be defending the W-1 Championship against Masayuki Kono on December 24th. This follows Soya’s direct loss to Kono following the W-1 Tag defense on 11/27. Kono stated that he will become the singles champion once more and he will do it by force if need be. Soya though stated that he has no intentions in dropping the singles belt just yet. Just like Kono, he feels that he still has much left to do as champion and looks to gain a rematch for the tag belts in the process.

The Cruiser belt will also be in defense on 12/24 as Andy Wu defends against Seiki Yoshioka. Both Seiki and Hiroshi Yamato challenged the champion on 11/27 with the champion accepting Seiki’s offer without hesitation. Seiki stated that he is out to prove himself and becoming champion will surely do that for him. While the champion Andy is out to set a standard for the younger talent in the promotion. He looks to bring a new excitement to the ring and hopes that Seiki can bring his best to their match.

Then lastly, Yuji Hino made a shock appearance on the 11/27 show as he aligned himself with the “REAL DESPERADO” faction in W-1. The freelance wrestler, formerly of K-DOJO, became a hot-topic on where he would be going after he left K-DOJO abruptly late last month. Hino stated that this has been planned for a while as he is friends with both NOSAWA and KAZMA, KAZMA being formerly of K-DOJO himself. Hino has made his intentions known that he is going straight after the W-1 Championship and that he will be challenging the winner of the 12/24 match.

Below is the announced card for W-1’s final big show of the year.

[BJW News] A big tag match has been signed for the December 20th show, as AJPW’s Suwama continue’s his recent change of competing outside of his promotion. He will be teaming with Daisuke Sekimoto as they take on the ZERO1’s Kohei Sato and freelancer Shuji Ishikawa, Ishikawa who himself has recently has been comping in All Japan fairly actively.

Below is the announced card for the show…

[Misc. News] HUB announced for the full card for his self-produced show on December 6th. Among the announced matches is HUB pulling double duty on the show as he will be dawning the GAO mask in the opening 3WAY match as well as working the main event against Minoru Fujita as well. 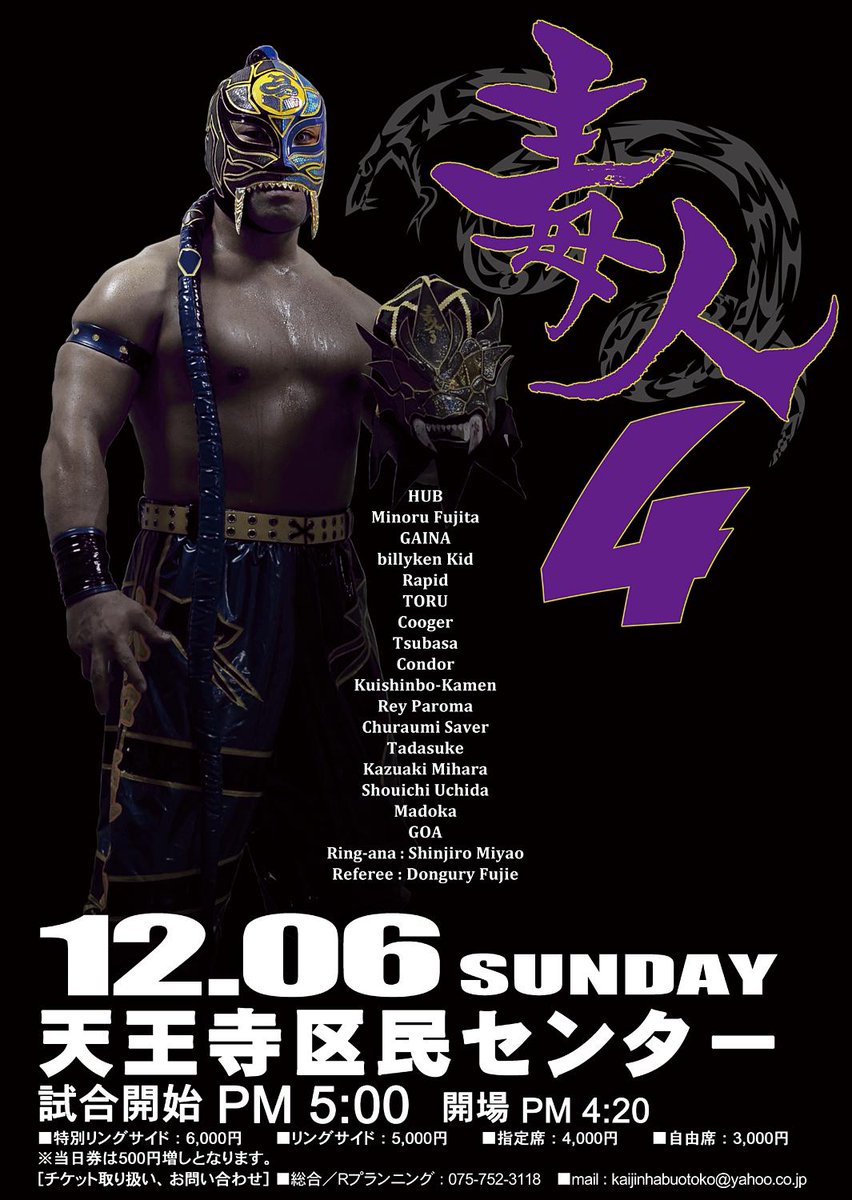 [HEAT-UP News] The full event card for the next show on December 13th has been released as well as who will be potentially in the running to crown the official first champion in January.

[GUTS World] The full event card has been released for GUTS World upcoming show on December 5th at Shinkiba 1stRING in Tokyo.

[Misc. News] Doutonbori and DOVE announced that they will be hosting their own New Year’s Eve show in Osaka, Japan.

Much like how BJW, DDT, and K-DOJO host their own special show in Tokyo at Korakuen, the promotions down in the southern region are looking to do something of their own. As well as Doutonbori and DOVE, Shi-en, Osaka Pro, J-2000, NPW and Osaka Joshi will be working on the show as well.

END_OF_DOCUMENT_TOKEN_TO_BE_REPLACED

(7) Semi-final – The Best in the World Hardcore Match: Masato Tanaka vs. Kintaro Kanemura
◆Winner: Tanaka (10:29) following the Sliding D with a chair.

[FMW News] The full event cards for the June shows have been announced as well as updates to the main event matches. Specifically for the Shinjuku FACE show on June 25 which is now FMW Army versus W★ING Monster Army, Flag Contra Flag, 4 versus 6, Barbed-wire Board Death Match.

[FMW News] Matches have been announced for the upcoming shows in June which will feature Team FMW taking on the W★ING Monster Army.

The shows in July were announced as well..

Below are the announced matches for the June shows at this time..