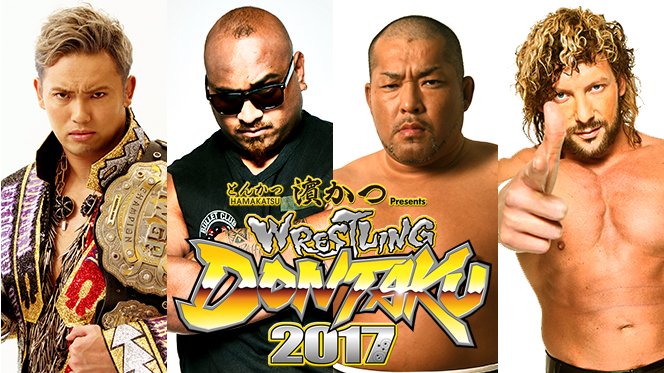 (3) Hirooki Goto, Toru Yano, Jado, Rocky Romero & Barreta vs. Minoru Suzuki, Yoshinobu Kanemaru, Taichi, El Desperado & TAKA Michinoku
♦Winner: Goto (12:20) following the GTR on TAKA.
~ Regardless of the loss, Suzuki asserted himseld as the NEVER Champion. That CHAOS will fall together if they try to remove the belt from his grip.

(4) David Finlay vs. Cody
♦Winner: Cody (7:31) following the Cross Rhodes.
~ Cody stated that he needs strong competition after the match.

(5) Juice Robinson & KUSHIDA vs. Tetsuya Naito & Hiromu Takahashi
♦Winner: Hiromu (9:00) following the TIME BOMB on KUSHIDA.
~ Naito passed off the IC belt to Hiromu as he declared he wants a new belt.

~ New Japan announced that participants for this years “BEST OF THE SUPER Jr. 24”.

~ New Japan announced that next years “Wrestling Dontaku” will be held on two back to back days.

(6) Naomichi Marufuji vs. Atsushi Kotoge
◆Winner: Marufuji (14:06) following a Shiranui.
~ A solid match between both men as the veteran Maru showcased that he is still a step above the younger competitor.

(7) Maybach Taniguchi vs. Takashi Iizuka
◆Winner: Maybach  (11:53) with the Maybach Press.
~ No count-out, no foul rules.
~ A violent and bloody match as early on Iizuka ripped at Maybach’s mask and exposing his face. Maybach then suffered from a lot of blood loss by the hands of Iizuka, but not enough for him to be able to secure the win.

(8) GHC Junior Heavyweight Championship Match: [29th Champion] Taichi vs. [Challenger] Daisuke Harada
◆Winner: Taichi (18:37) following an Avalanche style Black Mephisto.
~ 4th successful title defense.
~ Taichi tried to get the win with the aid of his Suzuki-gun teammates and even tried to use the GHC Jr. belt, though Atsushi Kotoge stepped in to stop that.
~ Harada looked to have had the match won with the Katayama but the ref was not quick enough on delivering the count. Taichi then secured the win with a Liger Bomb following the top rope drop style Black Mephisto.
~ During the backstage interview, Ishimori confronted Taichi and challenged him for the belt.

(10) GHC Heavyweight Championship Match: [23rd Champion] Minoru Suzuki vs. [Challenger] Takashi Sugiura
~ Special referee(s) + 3 count, give up, and KO only.
◆Winner: Suzuki (29:19) following the Gotch style Piledriver.
~ 4th successful title defense.
~ Suzuki sealed the fat of NOAH as Suzuki-gun will walk out with all the belts still under their control.
~ Suzuki-gun celebrated in the ring, but the NOAH roster then came out and surrounded the ropes at ringside.
~ No next challenger was officially decided, but the Global League does begin in mid-October.
~ Marufuji did make a bold claim though that if he does earn another title opportunity against Suzuzki that it will be all or nothing for NOAH. (Meaning that if he loses that NOAH is no more.) [NOAH News] Pro Wrestling NOAH has made it official that Killer Elite Squad will be defending the GHC Tag belts against War Machine on September 19th at “GREAT VOYAGE 2015 in OSAKA”.

(-) Maybach Taniguchi vs. Takashi Iizuka
~ No count-out, no foul rules.