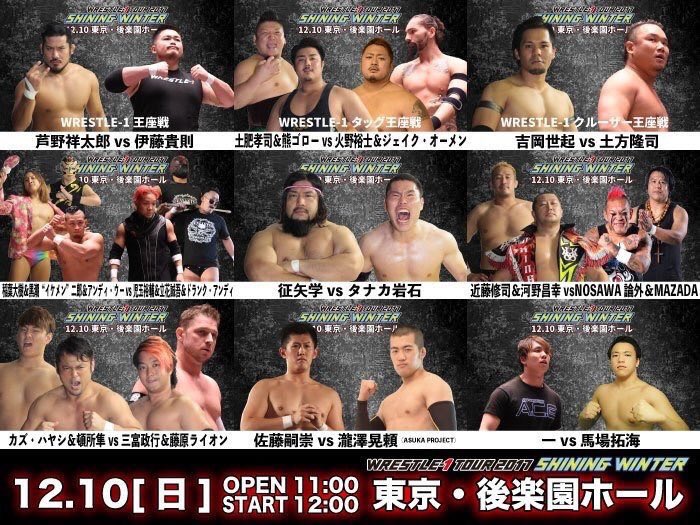 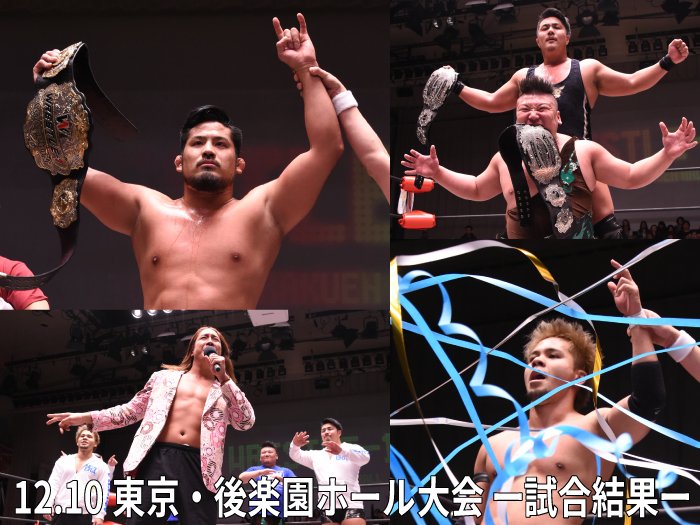 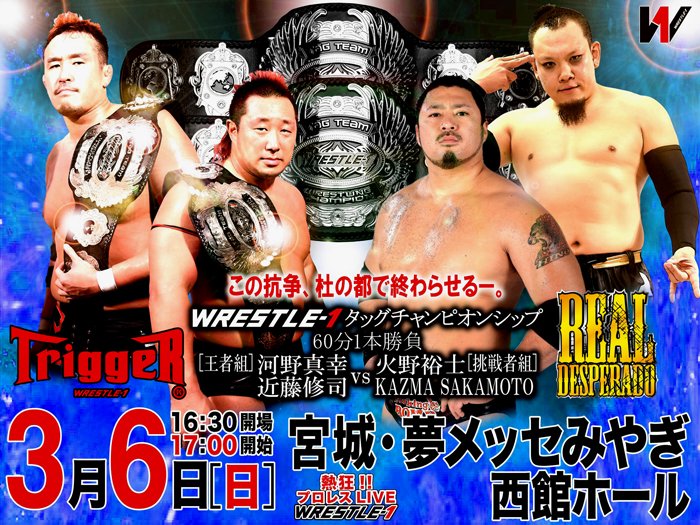 Soya stated that the purpose of today’s meeting is to officially celebrate the re-starting of the group as the “wild force” is now grown to a new level. Following the “Wild Audition Match” on 6/18 at the Korakuen Hall, Jun Kasai and Kumagoro were given the chance to be added to the group. This was followed immediately by Manabu Soya and Kasai challenging for the W-1 Tag belts and the match made official. With Soya saying that Kasai will bring a new dynamic to WILD with his death match roots. Soya with his power and Kasai the ability to endure limitless pain could prove to be beneficial.

It was announced as well that AKIRA and Kumagoro will have a special singles, senior vs junior, showdown match on the 7/12 show.

[WRESTLE-1 News] The full event card has been announced for the upcoming show on 4/1 and Daiki Inaba will be out of action as he undergoes surgery on his shoulder.

W-1 announced that Daiki Inaba will be undergoing surgery to his right shoulder following yet a dislocation following the KASSEN shows this past weekend. Inaba has suffered recurrent dislocations to his right shoulder joint since his debut and the injury has gotten to the point that surgery is necessary if he plans to continue competing. This comes as a blow in Inaba’s standing as he has been earning the nickname of W-1′s super rookie due to his repeated standout performances show after show. No return date has been announced as of this time, but W-1 hopes that everyone understands the situation at this time.

Below is the announced card for the next scheduled show….

[W-1 News (Part 2)] WRESTLE-1 announced the next defenses for the W-1 Championship and Tag Championship to take place on April 1st at the Korakuen Hall.

Following the show on 3/8, a new W-1 Champion was crowned as KAI finally achieved the biggest prize in the promotion as well as finally overcoming the veteran Keiji Mutoh in the process. Though with the victory a new challenger emerged in the freelance pro-wrestler Hideki Suzuki. Hideki has been running roughshod through everyone as he makes it known that he is not one to be taken lightly in any regard. Hideki has proven his dominance in both W-1 and ZERO1 over the last year even picking up a strong and seemingly quick victory over Masakatsu Funaki earlier this month. Hideki took no time in challenging the new champion with KAI accepting the offer. KAI stated that he will be the champion that W-1 deserves as he is determined to prove himself as the ace of the promotion.

This match will also have more at stake for KAI’s recent road to redemption as Hideki currently holds a victory over the new champion stemming back to ZERO1’s Fire Festival last Summer.

Then it was officially announced that “new WILD order” will be getting their next shot at the W-1 Tag belts on April 1st as well. This will mark the third time that the challengers will be going up against the champions, stemming back from the finals last year and a rematch in December. The duo hold a victory over the champions in a non-title match, but after winning a recent contendership 3WAY match the “WILD” say that the third time will be the charm.

Below are the announced matches for the next show on April 1st.

(1) Double Debut Match: Kumagoro vs. Shotaro Ashino
◆Winner: Ashino (6:32) with a Boston Crab.
~ Even though Kumagoro began his training in W-1 earlier last year Ashino’s skills as an amateur wrestler are clearly going to get him far early on.

(3) WRESTLE-1 vs DESPERADO Tag Match: Andy Wu & El Hijo del Pantera vs. KAZMA SAKAMOTO & Koji Doi
◆Winner: KAZMA (6:43) following a missed Mizuno Kutsugaefune from Andy on Pantera, KAZMA slipped in and snatched the pin-fall.
~ Issues between Andy and Pantera were apparent after the match. KAZMA called out to Pantera.

(4) WRESTLE-1 vs DESPERADO 6 Man Tag Match: Yasufumi Nakanoue, Yusuke Kodama & Daiki Inaba vs. Great Muta, Masayuki Kono & TAJIRI
◆Winner: Inaba (10:48) with a School Boy on TAJIRI.
~ The young guys with an upset win over the established talent.
~ Pantera came out as a second along with Doi for the DESPERADO team. Appears Pantera has found himself a new home.
~ Kono mentioned that DESPERADO still has a strong future during the backstage interview.

—————————–
~Matches were announced for the upcoming KASSEN W-1 vs ZERO1 show on March 12th
~ Masakatsu Funaki & Daiki Inaba vs. Shinjiro Otani & Yusaku Obata, Masato Tanaka vs. Manabu Soya, and Masayuki Kono & Ryoji Sai vs. Kohei Sato & Hideki Suzuki
~ Then a special 5vs5 tug-of-war match was announced for the March 13th show… (which is completely lopsided if Hama is on the W-1 team, just saying…)
—————————–

(6) KASSEN Special Single Match ~ WRESTLE-1 vs ZERO1 War: KAI vs. Masato Tanaka
◆Winner: KAI (12:16) with the Splash Plancha.
~ KAI continues claiming the much needed revenge wins and after the match called out for a shot at the W-1 Championship.

(7) WRESTLE-1 Tag Championship Match: [1st Champions] “Team 246” Kaz Hayashi & Shuji Kondo vs. [Challengers] “Too Sharp” Minoru Tanaka & Seiki Yoshioka
◆Winner: Hayashi (20:24) following the Power Plant on Minoru.
~ 5th successful title defense.
~ Team 246 still prove to be the strongest team in W-1 at this time.
~ Kaz announced that he plans to introduce a “Cruiser belt” into W-1 in the neat future.
~ Minoru had no comment as he left the Hall in silence.

(4) WRESTLE-1 vs DESPERADO: Jiro “Ikemen” Kuroshio vs. Koji Doi
◆Winner: Doi (5:32) following the Motherfucker (Double Underhook Lift Facebuster).
~ Doi, who is now aligned with DESPERADO, defeats his former friend and ally with a new move. Appears Doi has found a new sense of purpose in the heel group.
~ Doi continued to assault Kuroshio after the match. Beating him with chairs.

~ Soya claims the win over the W-1 Champion as well as the rights for the title match against him on January 30th.
~ Mutoh’s legs are known as a weakness of his, but with that said though rarely do you see a veteran tap out. Definitely trying to give Soya an edge heading into the title match.

(7) Special Single Match: Masakatsu Funaki vs. KAI
◆Winner: KAI (9:36) with a Thunder Fire Powerbomb.
~ KAI with a much needed win over Funaki. KAI stated that his next step is to reclaim the loss against Kono.

~ Funaki and Ikemen came out to kick off the show and to thank the fans for coming out this evening.
~ Ikemen stated that it is his goal to become W-1 Tag Champion.

(1) Minoru Tanaka, Daiki Inaba & Hiroki Murase vs. Hiroshi Yamato, Andy Wu & El Hijo del Pantera
◆Winner: Yamato (9:55) following a Northern Light Bomb on Murase.
~ Yamato, his current gimmick being that he is the “singer”, came out singing a new song for his entrance

(3) new WILD order vs Tokyo Gurentai Tag Match: AKIRA & Manabu Soya vs. NOSAWA Rongai & MAZADA
◆Winner: Soya (6:14) following a Wild Bomber on MAZADA.
~ WILD with the quick win, the duo end of the year on a high note in their pursuit to get another shot at the tag belts.

(4) Novus vs DESPERADO Tag Match: Koji Doi & Jiro “Ikemen” Kuroshio vs. Ryoji Sai [ZERO1] & KAZMA SAKAMOTO
◆Winner: KAZMA (7:20) with a Michinoku Driver II on Kuroshio.
~ KAZMA tried to offer Ikemen another chance to join DESPERADO, but he refused which led to Doi turning on Ikemen and officially accepting the open position in the group.

(7) WRESTLE-1 Tag Championship Match: [1st Champions] “Team 246” Kaz Hayashi & Shuji Kondo vs. [Challengers] “DESPERADO” Masayuki Kono & TAJIRI
◆Winner: Kaz (15:47) following a Diving Body Press off of a ladder on TAJIRI.
~ 2nd successful title defense.
~ The match turned into chaos as tables, chairs, and even a ladder were used in the match, while the ref was incapacitated.
~ WILD even came out to try and reclaim some order in the match, as Kondo was tied up in the ropes and Hayashi was outnumbered by DESPERADO.
~ Yasufumi and Kodama then came out to challenge the champions. Shocking alliance given their feud for the last several months, but it appears with Doi joining DESPERADO and Ikemen aligned with Funaki that, the former WNC rookie group, Novus may be no more.

(8) WRESTLE-1 Championship Match: [2nd Champion] Keiji Mutoh vs. [Challenger] Seiya Sanada
◆Winner: Mutoh (21:24) with a Figure Four Leg Lock.
~ 1st successful title defense.
~ Sanada tried his best against the veteran but once more fell to him this year.
~ Manabu Soya came out to assert himself as a potential contender against Mutoh.