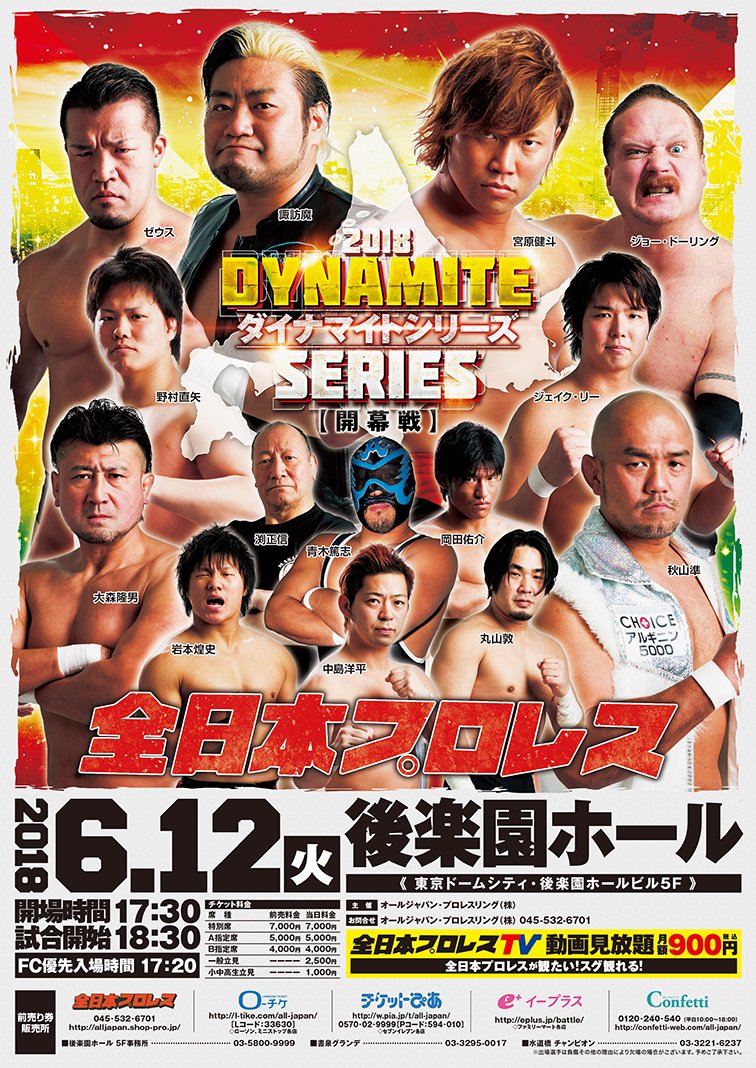 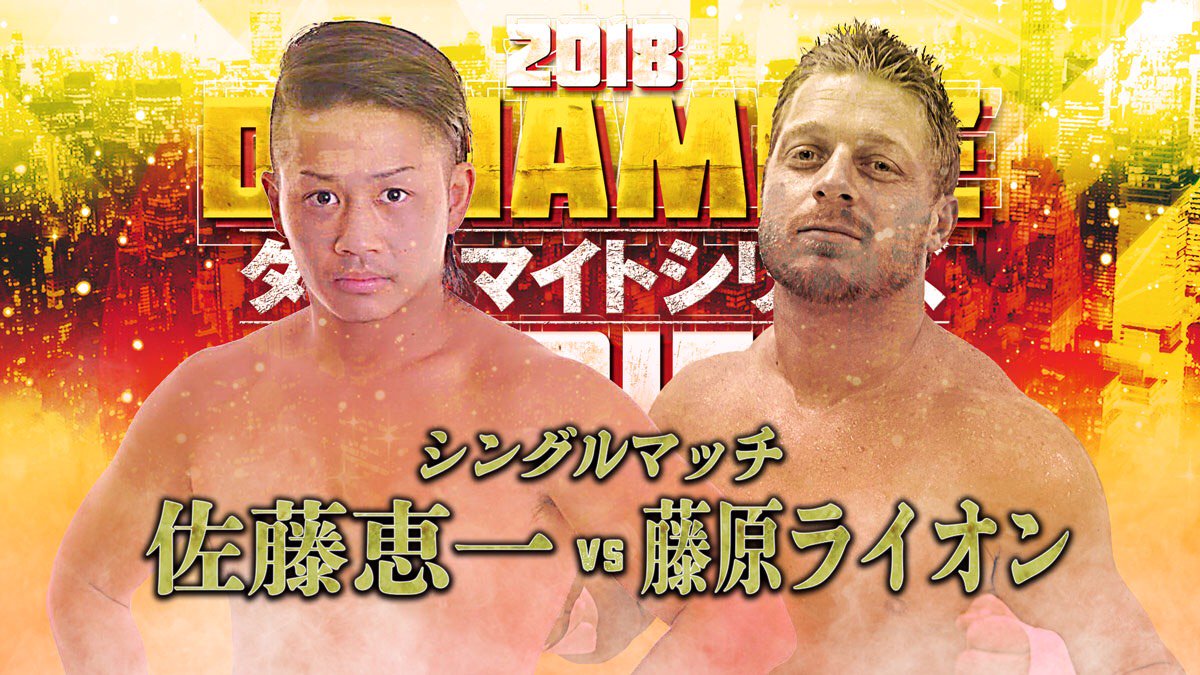 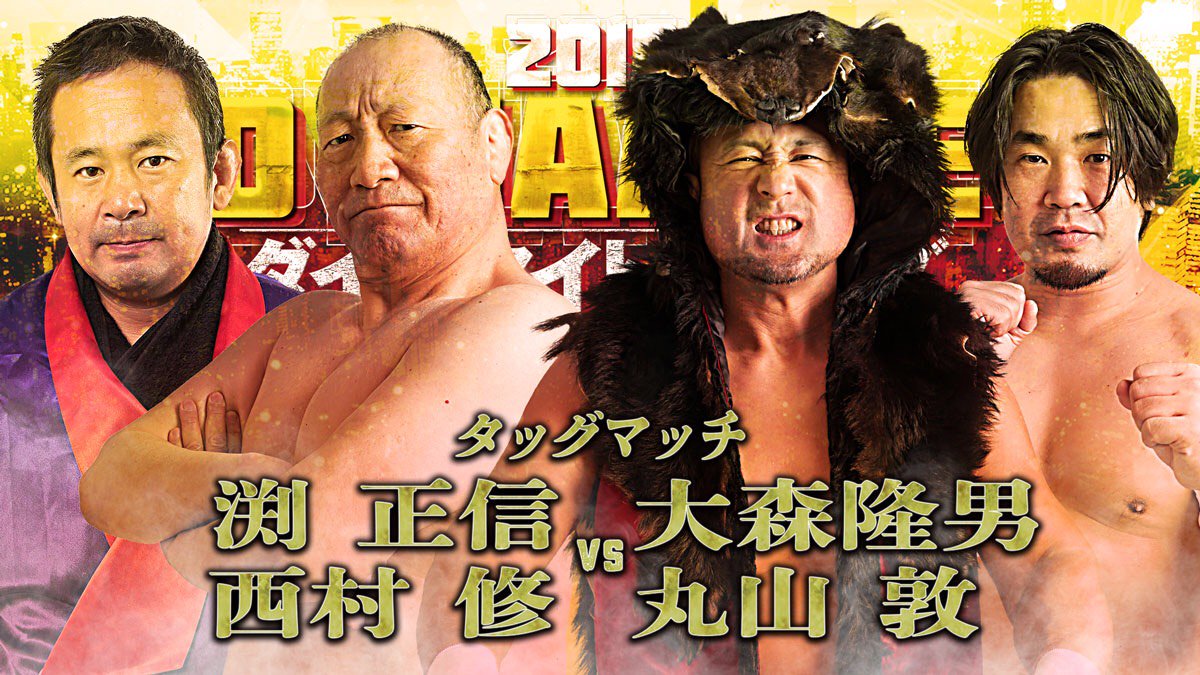 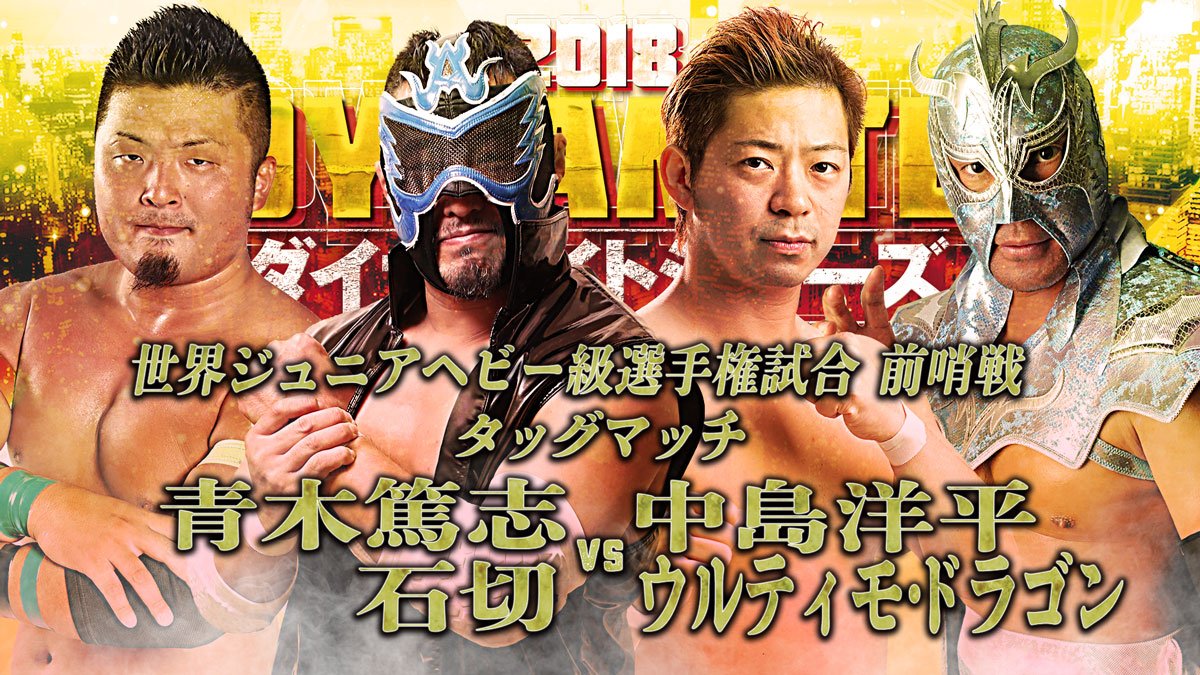 (3) World Junior Heavy Prelude: Atsushi Aoki & Ishikiri (LAND’S END) vs. Yohei Nakajima & Ultimo Dragon (Toryumon MEXICO)
◆Winner: Dragon (9:20) with a La Magistral on Ishikiri.
~ Yohei kept his focus on Aoki, but he still could not manage to get a win in the prelude. Aoki continued to criticize Yohei as he does not feel he is fully invested in being a champion. 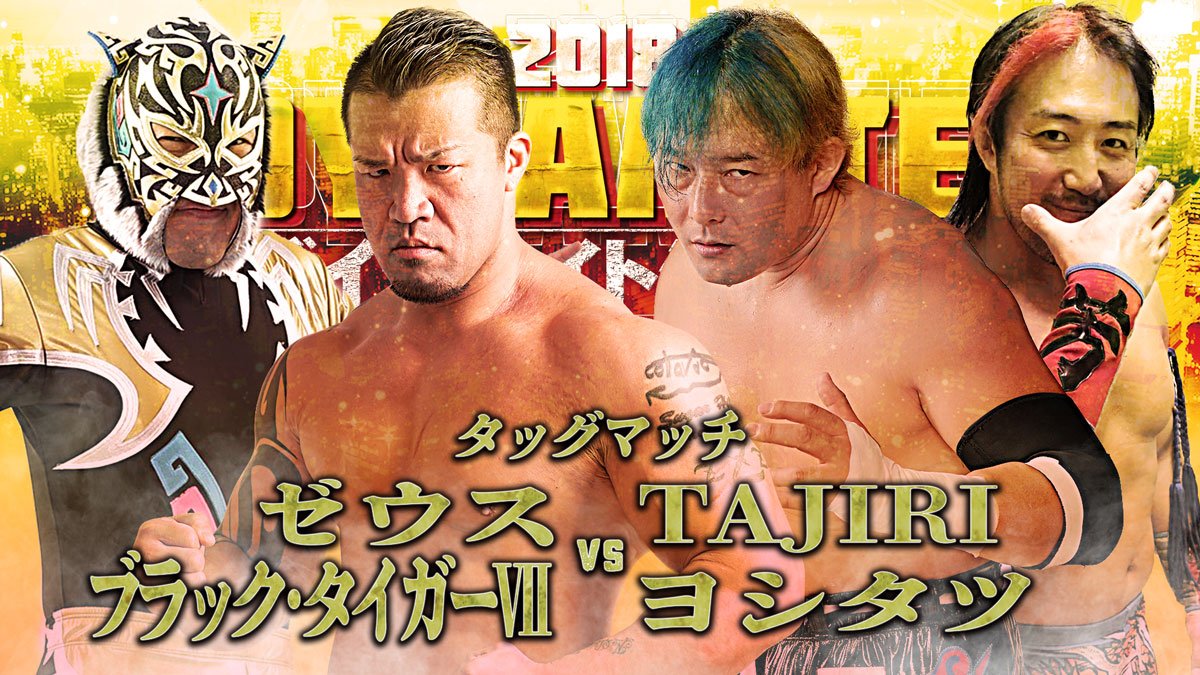 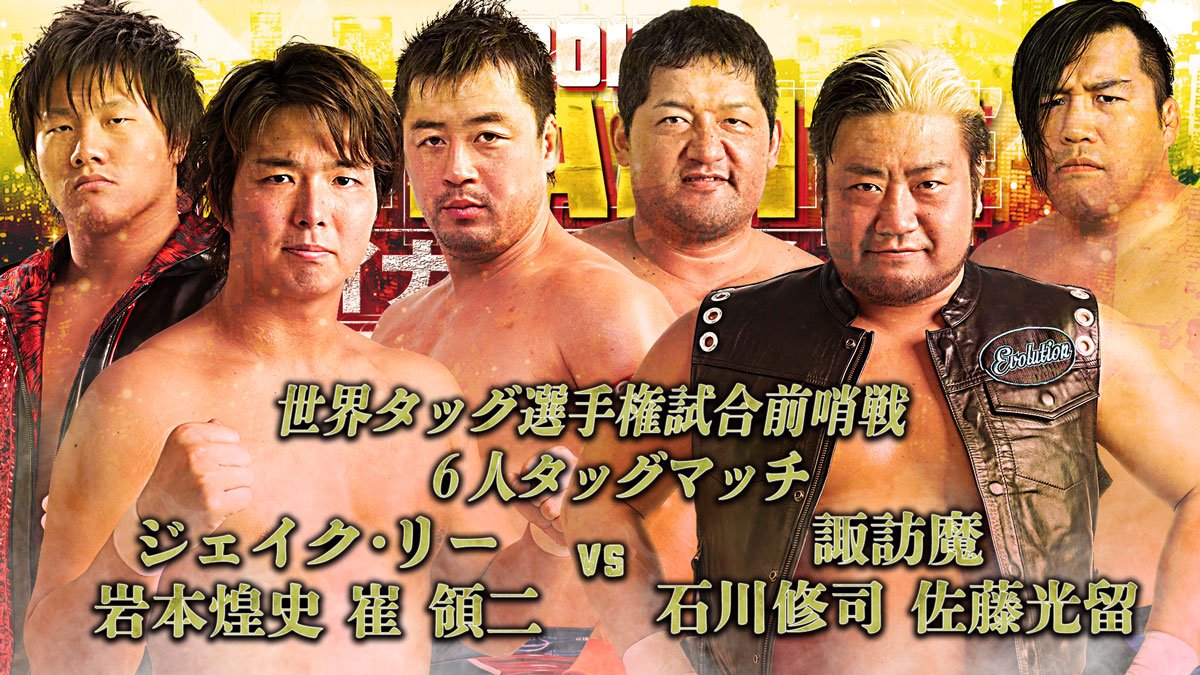 All 7 teams were announced for this years “Jr. TAG BATTLE OF GLORY”. This years junior league will run throughout the month of August (August 3rd – August 25), with the team with the highest points winning the league. 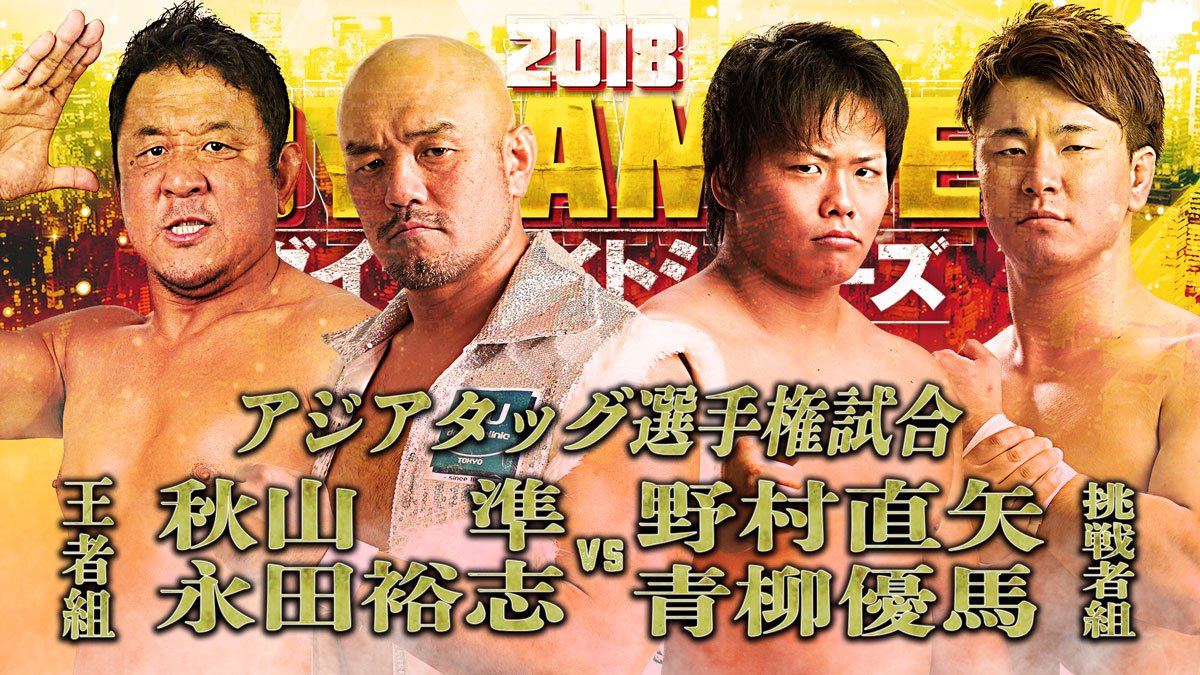 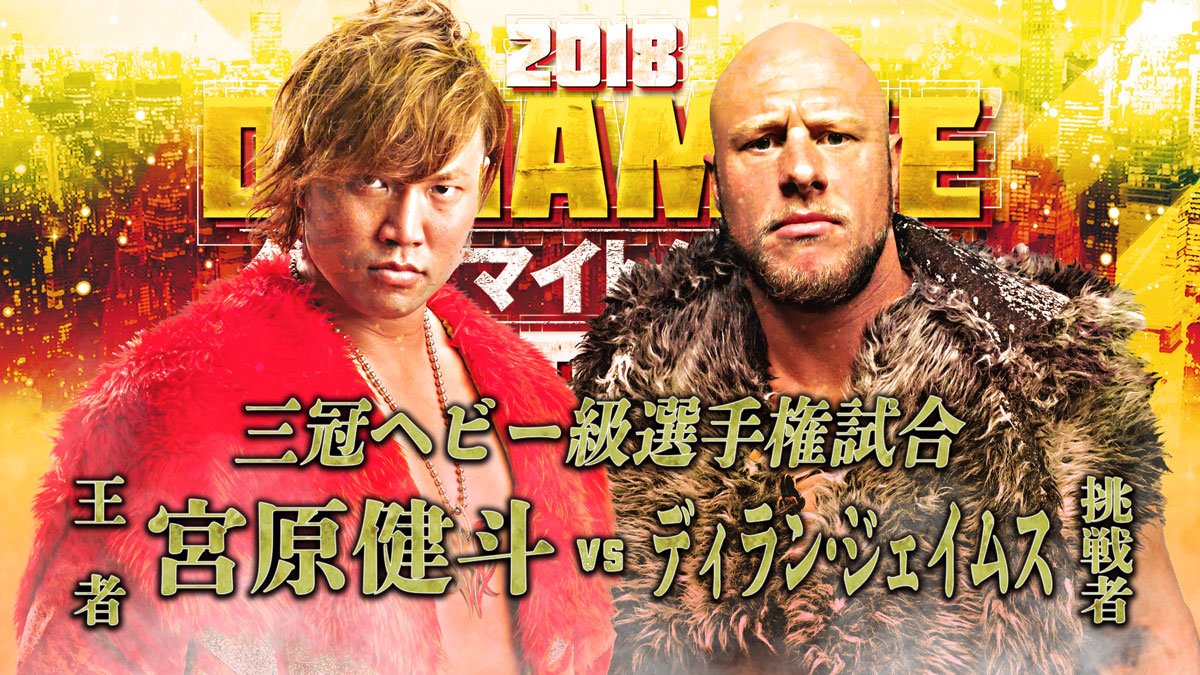 [AJPW News] All Japan announced the title matches that will be taking place in March.

Up first on March 14, KENSO will be defending the GAORA TV belt against Hikaru Sato. Hikaru has earned this title challenge after picking up a win over KENSO back on January 24th.

Then on March 22 will see both of the tag belts in defense. The Asia Tag belts will be on the line as Nagai and Minamino put them on the line against the veteran junior alliance of Kanemaru and Ultimo Dragon. Kanemaru calling out Minamino on the 2/20 show. Then the World Tag belts will be defended as “Wild Burning” Akiyama and Omori take on the super-heavyweight combination of Akebono and Yoshie.

Then on March 27 the World Junior and Triple Crown belts will be defended. The World Junior will see Atsushi Aoki and Kotaro Suzuki facing off in a rematch following the final match of the Jr. BATTLE OF GLORY. Kotaro claimed the victory for the second year in a row and a rematch has now been decided with the belt on the line. Kotaro has yet to hold the World Junior belt and this will mark the first time in 7 months that he has challenged for the belt. The the headlining match of the tour will feature Go Shiozaki putting the Triple Crown belt on the line against fellow Xceed teammate Kento Miyahara. This will mark Miyahara’s second ever challenge for the belt in which he claimed a win over the previous contender Zeus at the show on February 17th. Shiozaki accepted the challenge as he feels that Kento has earned this opportunity.

[AJPW News] All Japan announced the date for the next Triple Crown defense, as well as other announcements as they head into the new year.

There is only one remaining All Japan show for this year, on 12/14, then the promotion looks to head into the new year with solid start with two back to back shows at the Korakuen Hall on January 2nd & 3rd.

The big announcement from today though was that Joe Doering will be putting the Triple Crown belt on the line, once more, against Go Shiozaki at the January 3rd show. Shiozaki suffered defeat in his previous challenge on October 29th, but after claiming a strong win over the reigning champion in the final day of the “World’s Strongest Tag League” Shiozaki has earned himself another opportunity. It is highly unusual for a contender to get two back-to-back shots at the belt, but the PWF committee has determined that the recent win is more than showing that he is the most qualified for the next defense at this time. Shiozaki stated that he knows that this is his fourth time to be challenging for the TC belt and his second chance against Doering. He stated that he has a sense of purpose, more than before, and his preparing himself to finally be crowned Triple Crown champion. This could very well be his last chance at the belt let alone while Doering is champion. Will 2015 prove to be Shiozaki’s year?

Below is the announced card, at this time, for the 1/3 show…

——————————————————————————
The 68th generation World Tag Champions “Wild Burning”, Jun Akiyama & Takao Omori, then came out as part of the conference to talk about their plans heading into the new year. After winning the “World’s Strongest Tag League” have shown that they were the worthy champions before the tag league after all. Currently no challengers have stepped forward to challenge the champions, but they did make mention that KENSO & Mitsuya Nagai and Suwama & Joe Doering should be in line first as being the two teams that defeated the champions during the league. Wild Burning stated that they aim to reclaim those loses and to prove themeselves as the true “strongest tag team”.

——————————————————————————
Atsushi Aoki then came out to talk about his upcoming defense against Masanobu Fuchi on 12/14 and then what he is anticipating heading into the new year. Aoki stated that he has shown much success so far as he heads into his 5th defense of the belt this weekend. Aoki stated that he has much respect for the 60 year old Fuchi and everything that he has done throughout the years as well as for the World Junior belt. He then stated that there is no shortage of challengers out there and the door is open for anyone to step forward if he remains champion in the new year. He then made mention of his recent challenges against the heavyweights during the tag league and that his place should be doing his best at enhance and further build the World Junior belt as something that people need to see.

Then speaking of the junior class, All Japan announced that the “2015 Excite Series Jr. BATTLE OF GLORY” will be taking place from February 7th to February 20th.

(1) SUSHI vs. Menso~re Oyaji [FREE]
◆Winner: SUSHI (4:46) with the Katsuo no Ipponzuri.
~ Oyaji removed his mask revealing himself as Yohei Nakajima (formerly of Toryumon/Dragondoor/ElDorado). Yohei stated that he will be going forward as himself.
~ Though this was not a total secret in regards to who was under the mask. Still an interesting development nonetheless.
~ Yohei made it known that he wants to join the All Japan full-time as well as well as Kotaro’s offer to join Xceed.

(7) Triple Crown Championship Match: [49th Champion] Suwama vs. [Challenger] Joe Doering
◆Winner: Doering (21:11) with the Revolution Bomb.
~ Champion falls on his 1st title defense.
~ Doering becomes the 50th generation champion.
~ Much respect is shown between Joe and Suwama after the match. ~ The other “Evolution” members in Hikaru Sato and the new addition of Atsushi Aoki came out to congratulate the new champion.

(5) Jun Akiyama, Zeus & The Bodyguard vs. KENSO, Mitsuya Nagai & Takeshi Minamino
◆Winner: Zeus (15:17) with a Jackahmmer on Minamino.
~ KENSO once more challenged for a World Tag match. Him and Akiyama brawled.

~ Due to Doering’s challenge, tomorrow’s show has been changed.

[AJPW News] All Japan announced the card for their next upcoming show on March 16, potential AJPW and K-DOJO alliance in the works, and the next Triple Crown defense has been set.

What started out as a one talent competing on a the junior tournament appears to be opening the door for a true alliance with TAKA Michinoku’s school/dojo in KAIENTAI DOJO out of Chiba, Japan. On March 16, All Japan will be holding a show at K-DOJO’s home arena and a few talent from the promotion will also be competing on the show.
Most notably will see the ace of K-DOJO in Kengo Mashimo going up against the ace of All Japan in Suwama in a tag team match.

Below is the announced card at this time. Match order will be announced in the future.

Only the title match has been announced as of this time.

All Japan also held a press conference to rap up Sundays show as well as lead into the the final months of 2012.

First up is the announcement that Koji Kanemoto has officially become a member of STACK OF ARMS (SOA).

This has been expected for quite some time now as the history of himself with Minoru Tanaka and the fact that he has been competing along with the members of this faction for most of this year. Though with the All Asia Tag Championship win it was seen to be only fitting that he would finally become a member of the SOA.
All 4 members of SOA will be competing in the World’s Strongest Tag League which is set to begin on November 17.
Speaking of the All Asia Tag Champions they officially appointed their first challengers in “Team 246” Kaz Hayashi & Shuji Kondo. Minoru & Kanemoto stated that they want to have a high quality match to kick off their reign as champions, and nothing better than to go after the other veteran junior team of All Japan.
No date for the title match has been set, but it could very well take place on December 11, after the Tag League is finished.

Next up, All Japan held a press conference for the upcoming title matches that were previously announced earlier that day.

The first being Hiroshi Yamato defending the World Junior belt against Kaz Hayashi.
Yamato right off the bat seems to be taking his recent title wins go to his head, and being that this is his first title reign that is somewhat expected. Yamato is calling himself “The Symbol of All Japan Pro-Wrestling Juniors”. Yamato is aiming to build a new era as the Junior Champion. Kaz Hayashi being a former champion on multiple occasions himself has took notice to the way Yamato has been acting as of late. The way he was dressed just for the press event was even a bit on the odd side of things. Hayashi said he will be coming to reclaim that very title belt.

Then the last part of the press conference saw the meeting between Maskatsu Funaki and Manabu Soya, as Funaki defends the Triple Crown belts against Manabu on December 11.

Manabu picked up the win over Funaki’s SOA teammate in Masayuki Kono, and subsequently made the challenge to the reigning champion after his defense against Omori on October 21st.
Funaki though made a stipulation back at Manabu, that if Manabu loses this upcoming title match (no date announced as of yet) that him and Omori will be forced to disband GET WILD. That is definitely putting a lot more pressure on Manabu Soya, as they are also reigning World Tag Champions. If they are forced to split that means they will also lose the belts
Manabu officially agreed to these terms at the press conference and the title match has been set to happen in December. Manabu has nothing but revenge on his mind as he faces off against Funaki as he wants to defend the loss against Omori and prove that GET WILD is a strong team in All Japan.
Funaki also stated that he wants a shot at the World Tag belts as well, but at this point in time the upcoming Tag League will be deciding who will be the next challengers.
Manabu stated that it is his time to prove that he is ready for the huge challenge set before him.