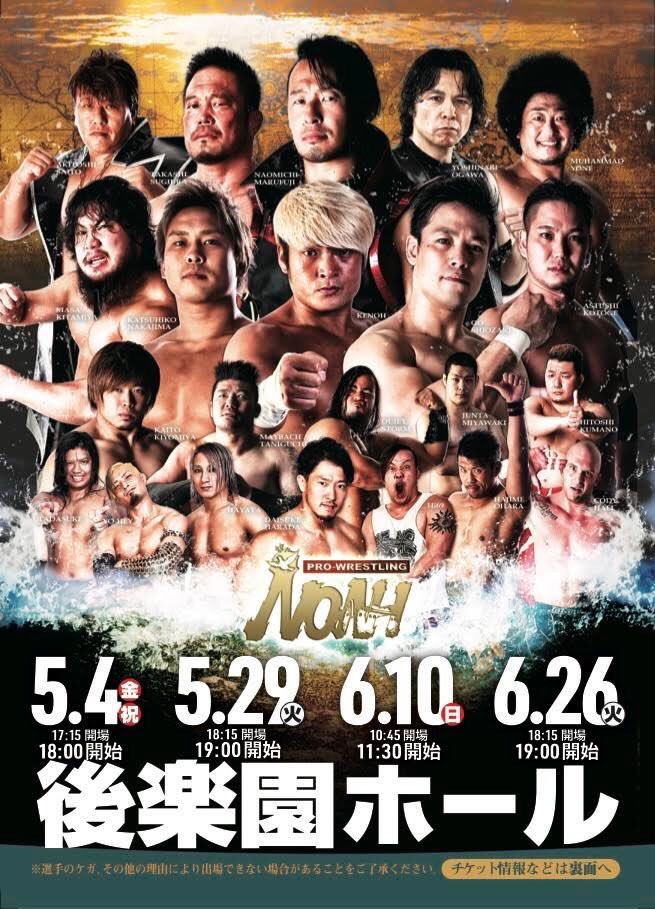 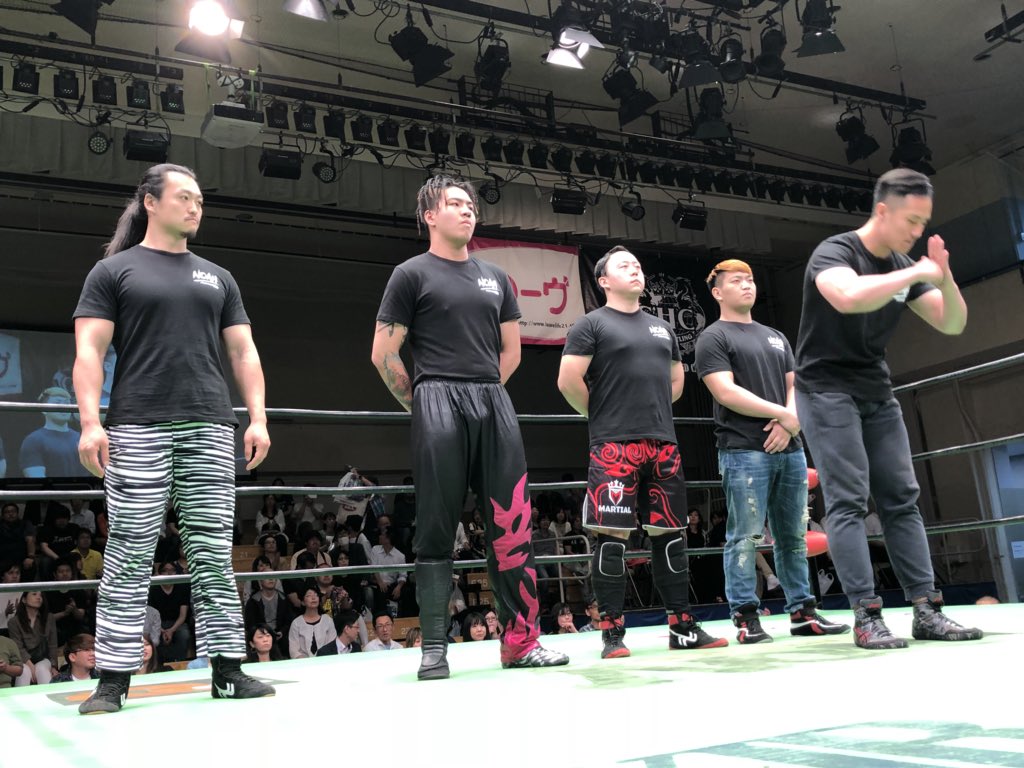 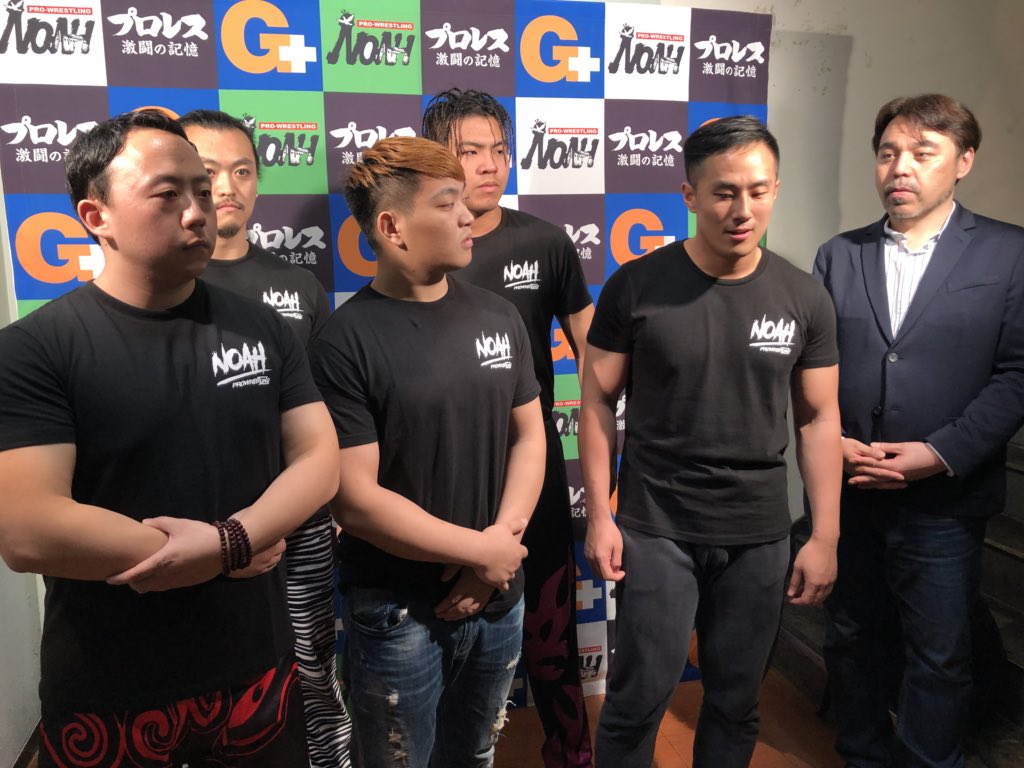 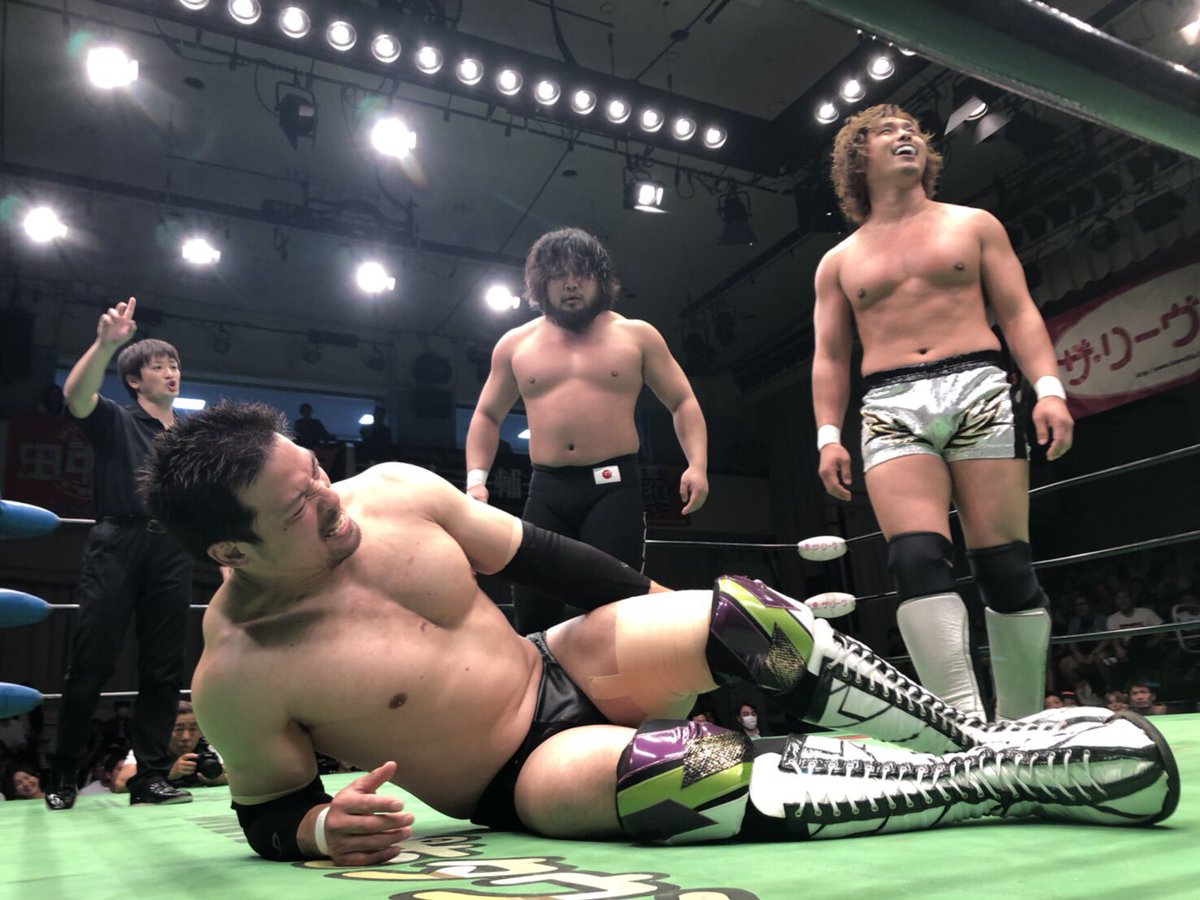 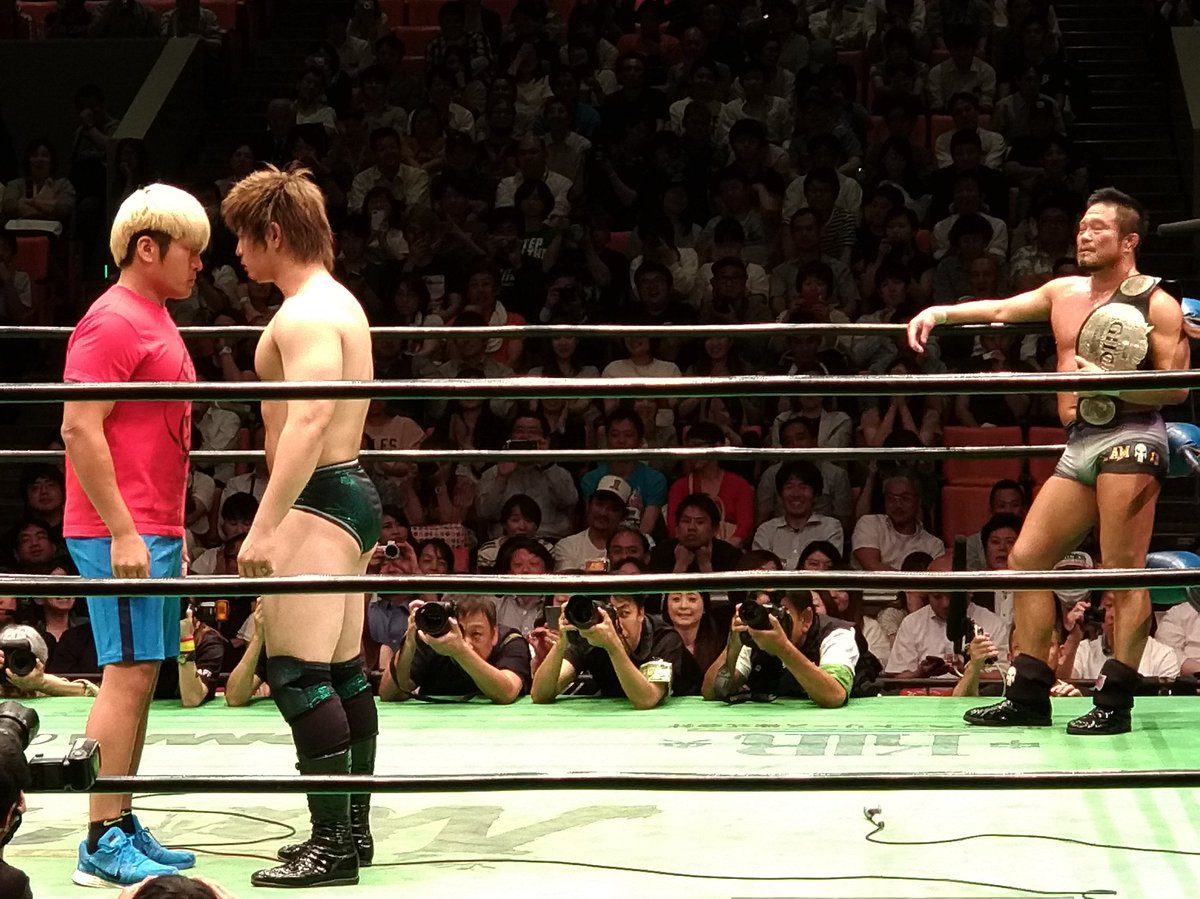 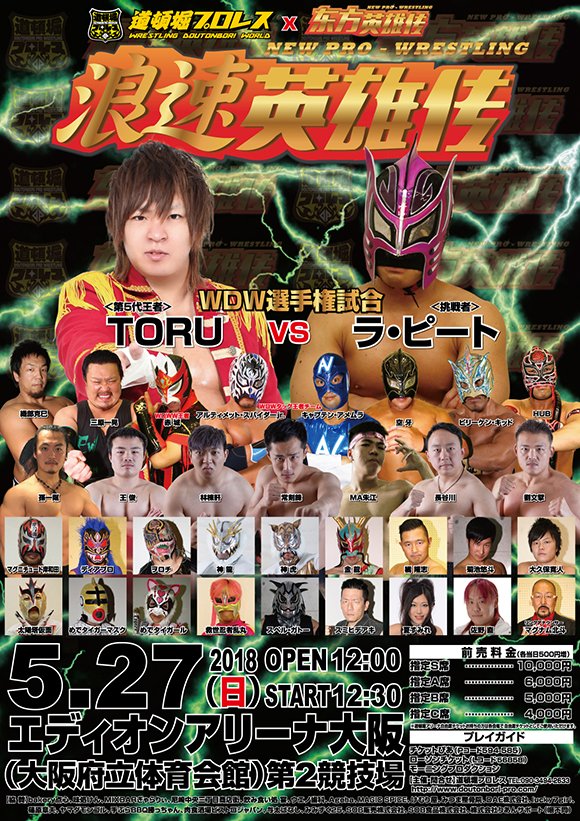 ~ Following yesterday’s show, two title matches were setup for the June 12 show at the Korakuen. Then today the full event card was announced as well. ~ A press conference was held today as the 60th Triple Crown Heavyweight Champion Kento Miyahara met with his next opponent in Dylan James. This will mark the first ever challenge for the belt for James though not his first chance at a singles belt in Japan as he is a former ZERO1 World Heavyweight Champion. Let alone him being 1/2 of the current World Tag Champions along with Ryoji Sai. Which him and Sai are set to defend the belts on June 3 against TAJIRI and KAI. Miyahara is coming off of his first defense against the Champion Carnival 2018 winner in Naomichi Marufuji and seeks to now try and outdo his previous run with the belt. James though is eager for the upcoming title matches as he aims to follow in the footsteps of the foreigners who came before him like Stan Hansen and Terry Gordy.

James was then joined by his tag partner Ryoji Sai as they discussed the upcoming World Tag challenge TAJIRI and Ryoji Sai on June 3 in Kobe. The champions seek to not only defend their belts but to also exact some revenge as they have found themselves on the wrong end of the challengers tricks and tactics. Sai stated that the unlikely duo have proven to be a crafty team, but he and James continue to get stronger each time they are in the ring. That they aim to no longer suffer anymore shame and prove themselves as a top tier team in the promotion. That will of course come against a team that will do nearly anything to win the titles themselves.

Then before Yuma Aoyagi is set to return to the ring on June 5, it was announced that him and Naoya Nomura will be challenging Jun Akiyama and Yuji Nagata for the Asia Tag belts on June 12 at the Korakuen Hall. Nomura and Aoyagi were originally set to defend the Asia Tag belts against Akiyama and Nagata back on February 3 of this year, but due to Aoyagi suffering an ankle injury the month before they were forced to vacate the belts. The young duo look to overcome the veteran team and reclaim the belts the belts that they never directly lost.

~ It was announced that Hideki Suzuki will be defending the World Strong belt against Takuya Nomura on June 20 at the Korakuen Hall. Then the format was announced for the main event death match between Takeda and Kodaka. ~ It was made official that Soma Takao will be challenging HARASHIMA for the EXTREME Championship belt on June 24 at the Korakuen Hall. 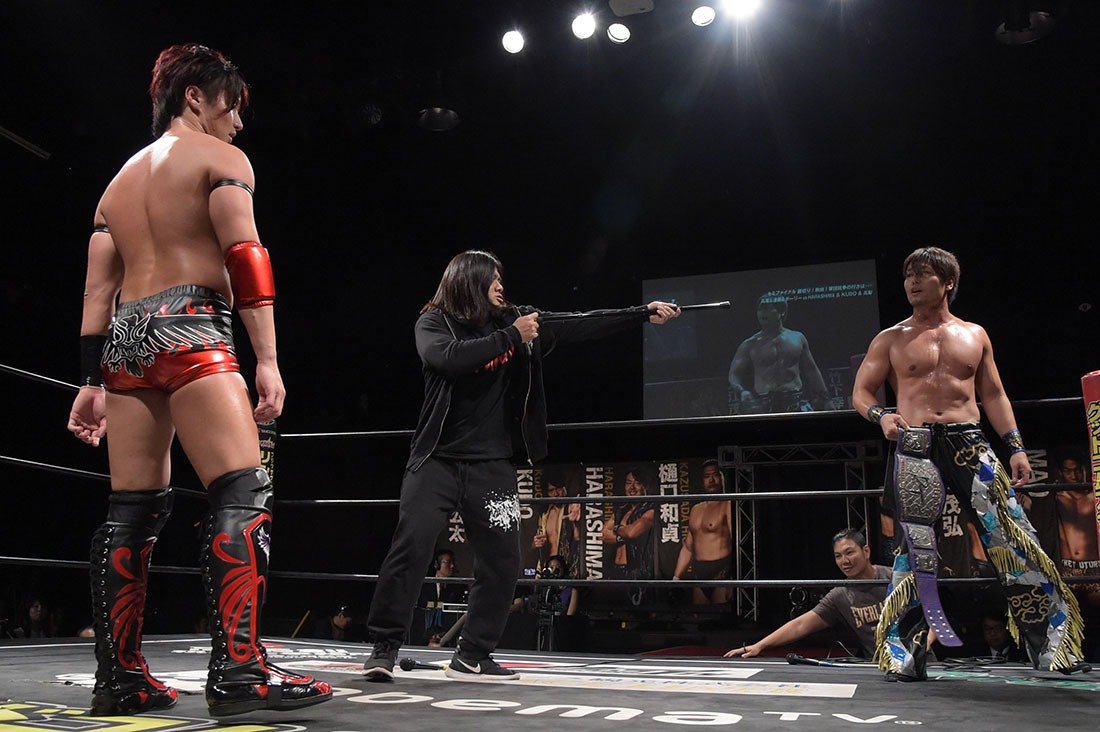 Makoto Oishi publicly proposed to Misaki Ohata during a special outdoor show tonight in DDT. The two have were reported to have been dating for some time now.

~ The full event card was announced for the June 3 card at the Shinjuku Village. 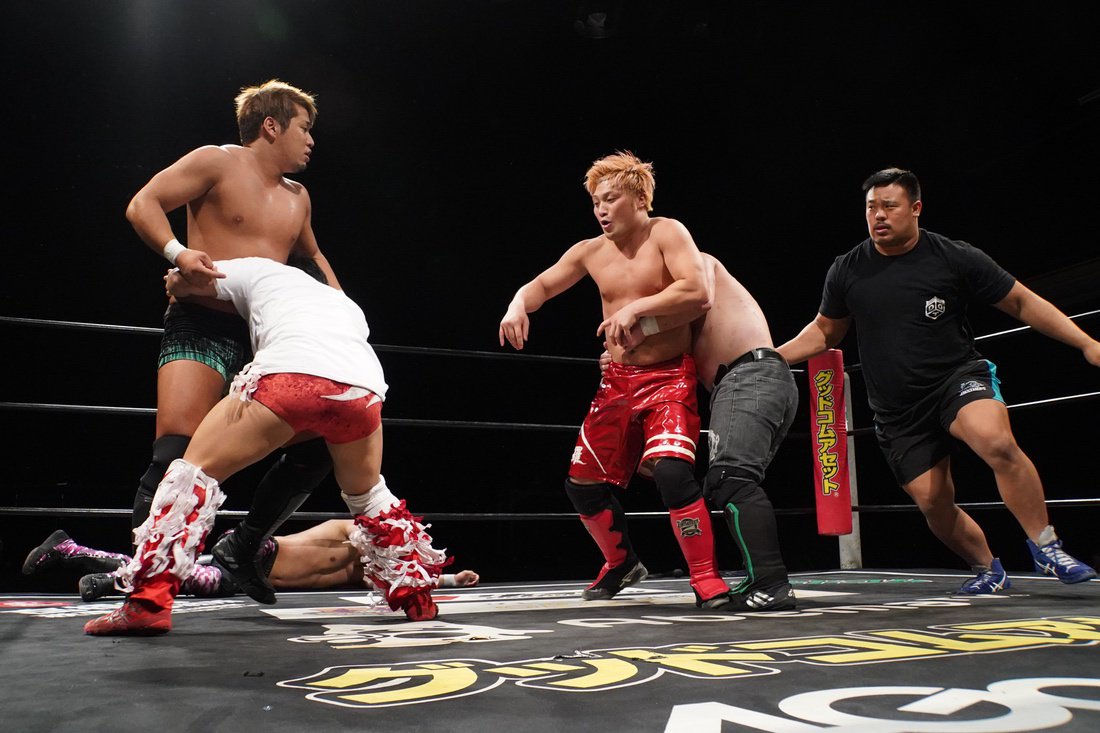 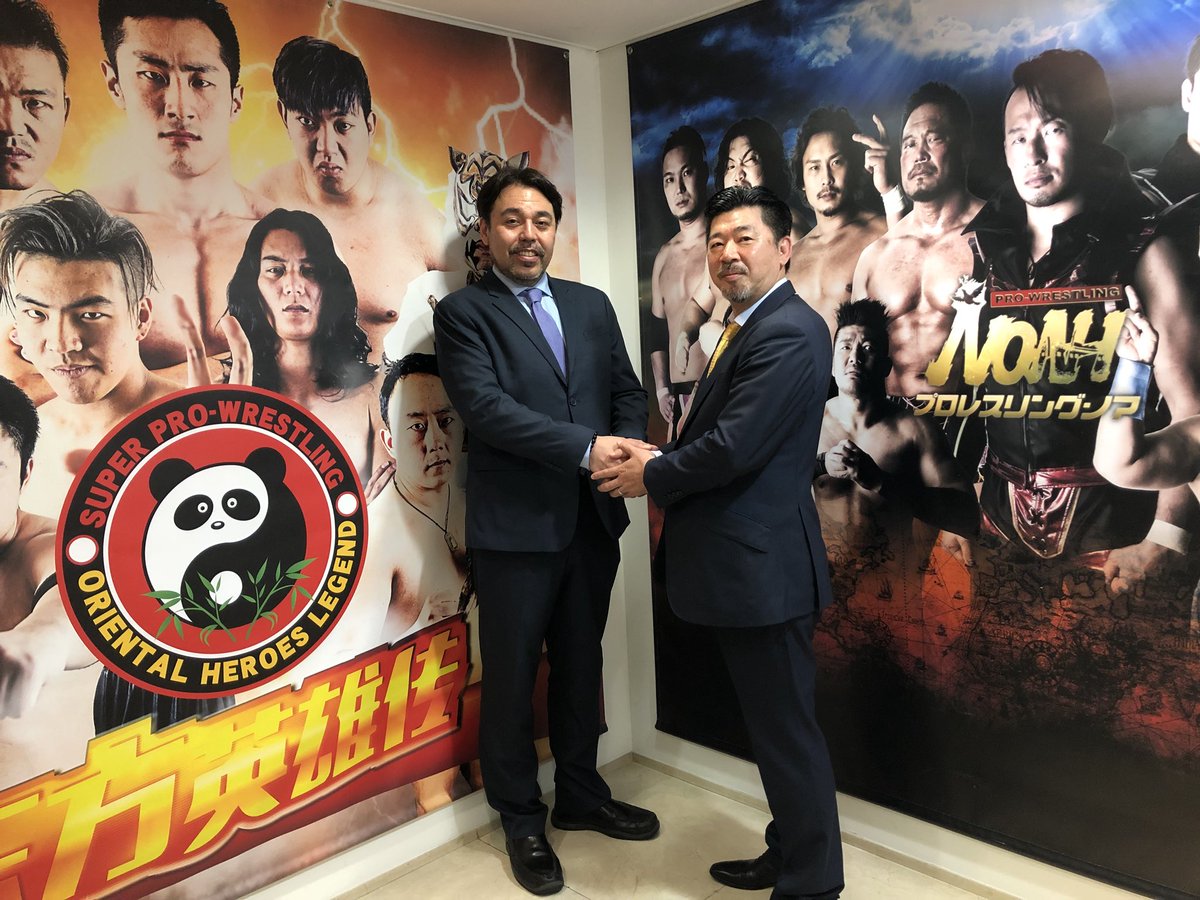 Toho Eiyuden, also known as Oriental Heroes, based out of Shanghai, China, is what formerly used to consist of IGF (Inoki Genome Federation) before they underwent a split from Antonio Inoki last year. As for this alliance though, it started out with Simon allowing his students to go and train in the NOAH dojo. As they needed an open dojo in Tokyo for training their students. Which KENSO, who now competes as freelance in NOAH, was once (or may still be) involved with training the Shanghai wrestlers. Uchida then thought there could be more to this than just training and the two groups have been in talks since March about a true alliance.

The main details of the alliance are as follows. The aim is for the two promotion to work together in the further development of the China market. That development entails discovering new talent in China, teaching, and even PR work. In Japan. Toho Eiyuden will see their wrestlers in joint training with NOAH’s wrestlers. Then lastly the two promotions will be working together on several shows. The first being NOAH’s upcoming Korakuen Hall show on May 29 in which some of the Toho Eiyuden wrestlers will greet the audience for the first time. Though they will not be competing until the Korakuen Hall show on June 26 and the tour scheduled in July. Then NOAH will be competing for Toho Eiyuden in Shanghai on August 8 & 9th.

~ The latest W-1 TV was released, as it features highlights heading into the Korakuen Hall show on June 13.

~ Then it was announced that Kuroshio will be teaming with Masato Tanaka on the June 13 show, as Seigo Tachibana is currently out with injury. ~ Masato Kamino was announced to miss the upcoming show on November 9, due to a minor concussion, as Makoto Oishi was announced as his replacement on the show. 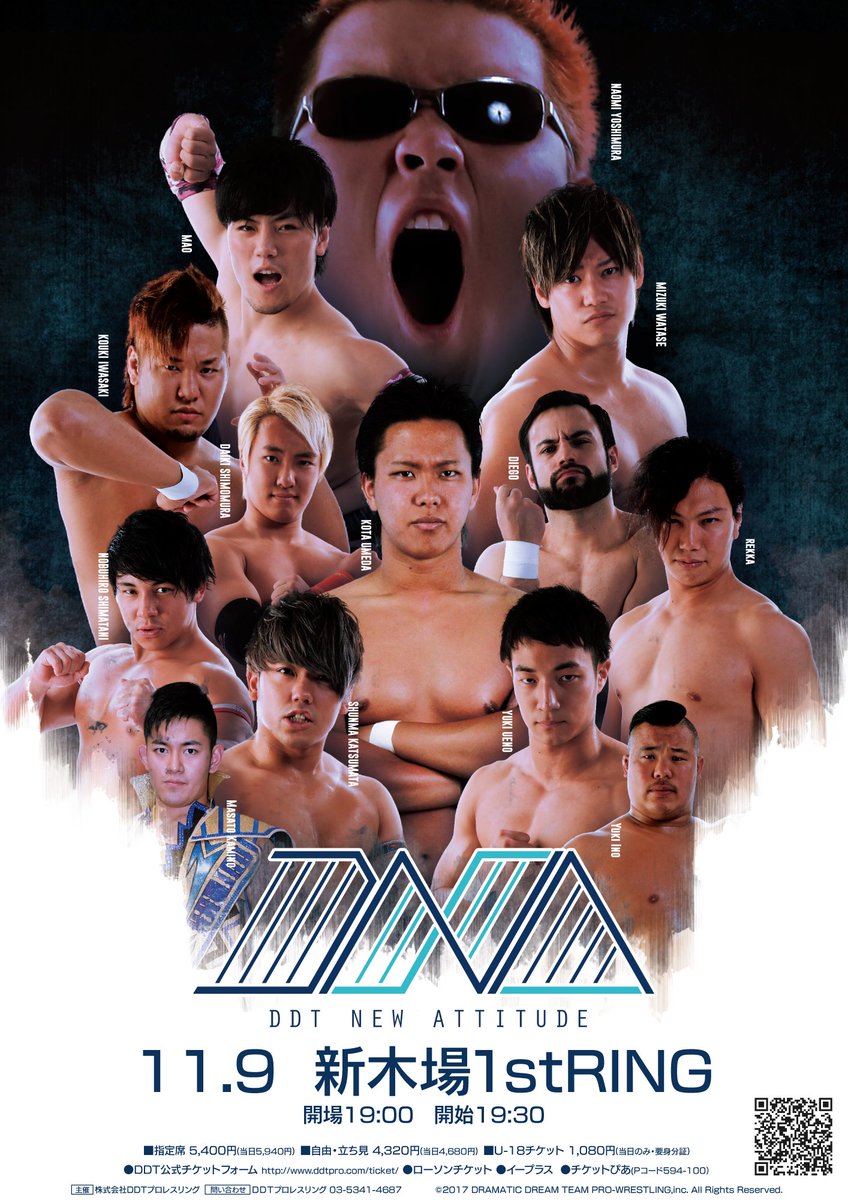 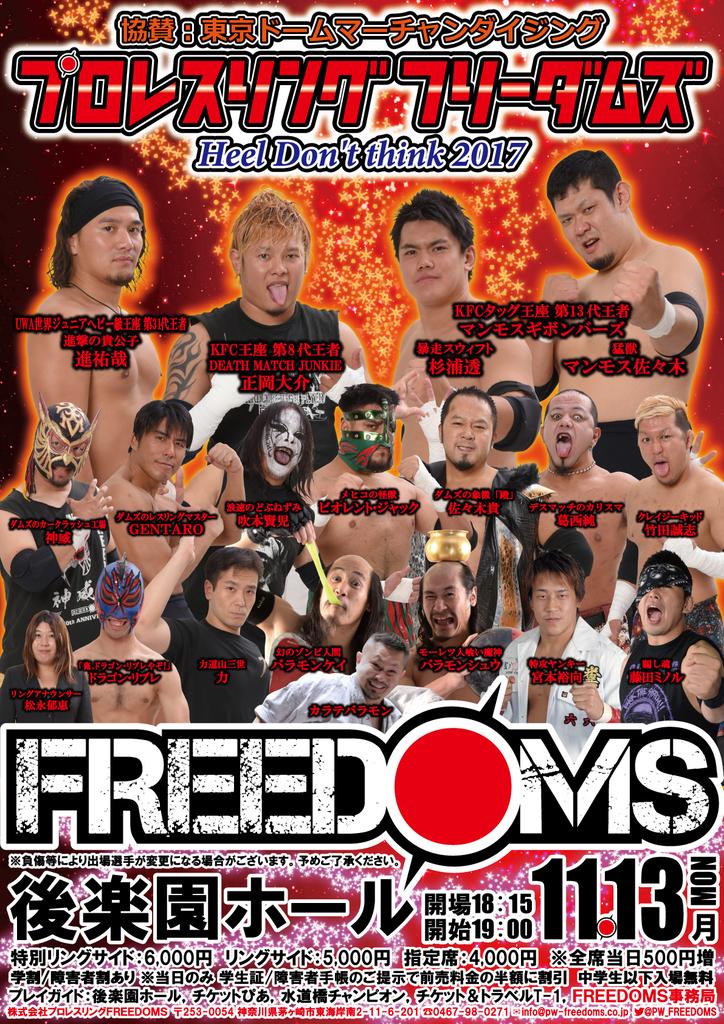 ~ The full card and match order was announced for the November 12 show in Chiba. 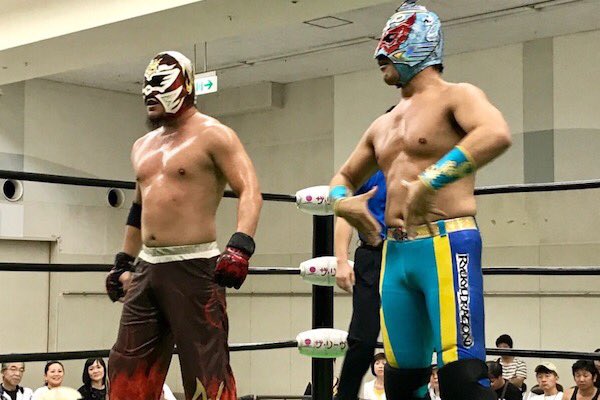 ~ Ryukyu Dragon’s Gurukun Mask and Shuri Joe have expressed their dissatisfaction in not receiving a proper challenge for the GHC Jr. Tag belts, stemming for this past Summer’s Jr. Tag League, after other teams receiving priority before them. The team from Okinawa recently had an interview published to get their challenge out in the public. 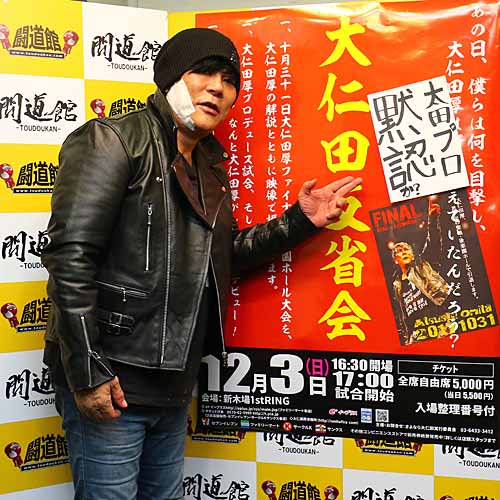 ~ Atsushi Onita announced that he will be holding a special show on December 3 at the Shinkiba 1stRING. What is being dubbed the “Onita Evaluation Meeting” will feature Onita reflecting upon his retirement match with a special viewing of his final match. Among the show Onita will be featuring a match as he will be taking over as the special referee. Onita stated that his intentions are to be similar to the former referee Shiro Abe, but the twist being that he will be a referee that brings weapons.

~ It was announced that Choshu will be hosting his own produce show on January 14 at the Korakuen Hall. The show will also be connected with S.P.E. who are also hosting the DIFFER ARIAKE CUP at the end of this month.

Currently no matches have been announced for the show at this time.

~ The group that is compromised of what remained of Antonio Inoki’s IGF, now known as IGF Shanghai, will be hosting their first event in Japan on November 16 at the Korakuen Hall.

~ The full event cards were announced for the November 5 and November 13 shows. 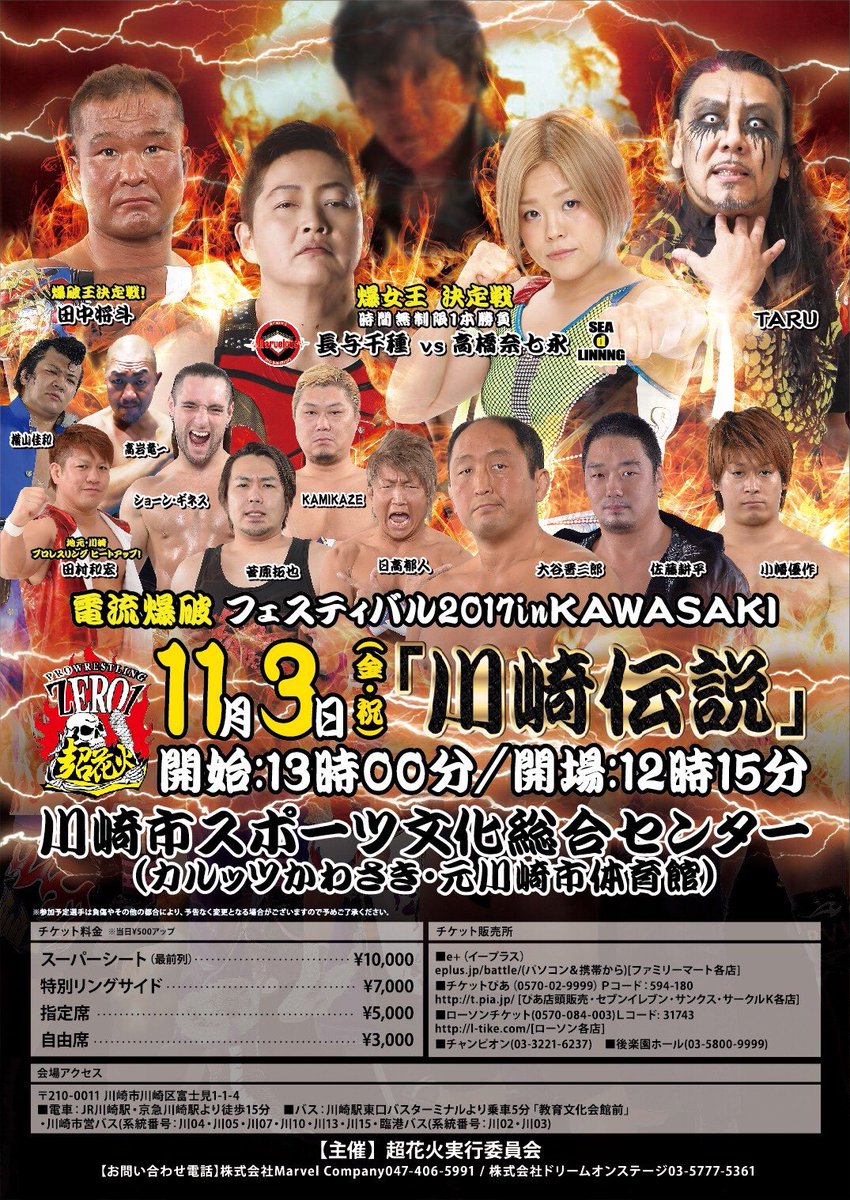