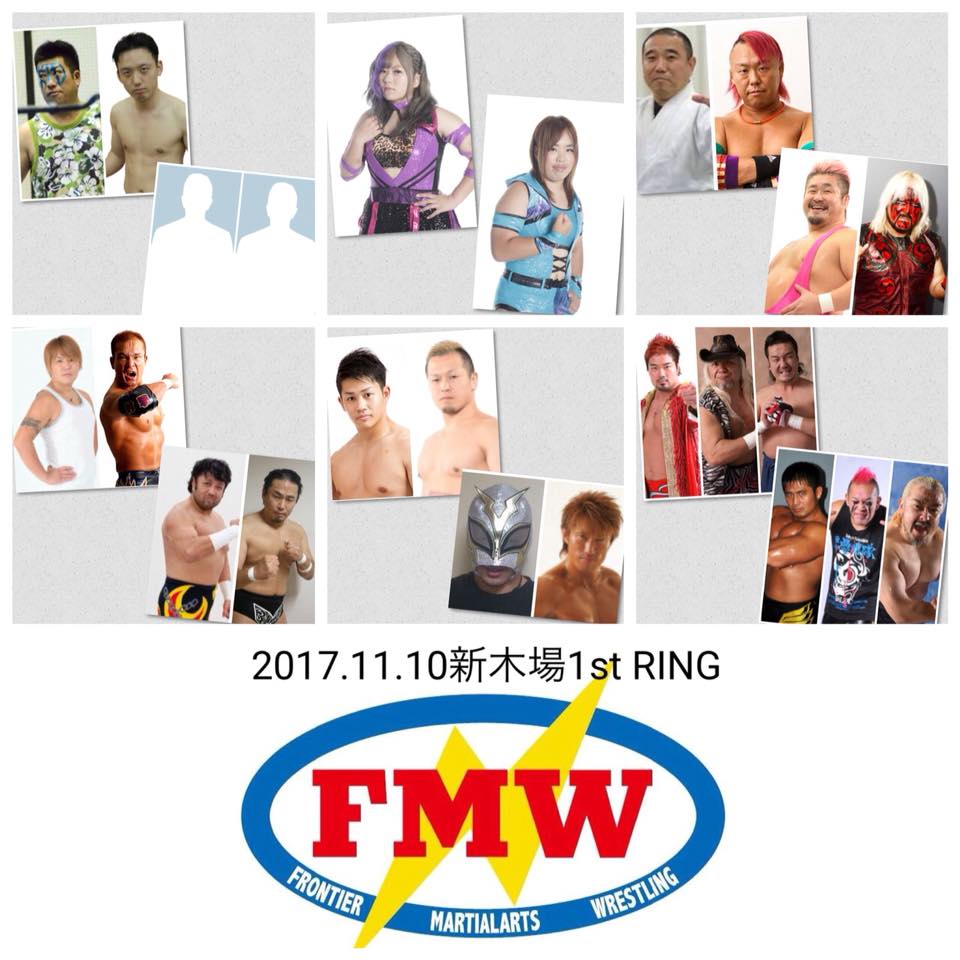 ~ Earlier in the day, a press event was held for the upcoming Asia Tag match that is scheduled to take place on June 20. As Onita and Masanobu Fuchi will defend against Atsushi Aoki and Hikaru Sato. Hikaru was not present, as he is out with an undisclosed minor injury, but stated that he will be able to return and compete in the title match. As for Onita, he stated that thanks to Fuchi that he has perfected the use of a backdrop, which he in turn used today to take out Aoki, and stated that he aims to retire with the belt by his side.

(4) KAI [W-1] & Hi69 [FREE] vs. Koji Kanemoto & Minoru Tanaka [both FREE]
◆Winner: Minoru (11:46) with the Tanaka Leg Bar on Hi69.
~ Junior Stars with the win as Minoru stated that he wishes to continue competing in FMW in the future. Minoru competed in the junior division in FMW in the late 90’s. Even going so far to say that he would accept an explosion deathmatch against Onita.

(6) W★ING Kanemura Road to Retirement ~ Scramble Bunkhouse Deathmatch: Atsushi Onita, Hideki Hosaka, Ricky Fuji & Gosaku Goshogawara vs. Yoshihiro Takayama, W★ING Kanemura, Raijin Yaguchi & NOSAWA Rongai
◆Winner: Kanemura (13:56) following a Chair Attack on Goshogawara.
~ Kanemura with the win as he gets one over Onita, as only a few months remain before he final retires from the ring. Respect was shown between Onita and Kanemura as they finally shook hands.
~ Onita was challenged by Nagai and Nakano for a tag match on 11/24 at the Korakuen Hall.

[FMW News] More details have been released in regards to the full restoration of the former promotion.

Choden Senshi Battleranger lead the press conference as he announced that he and representative Hideki Takahashi have come to terms with Atsushi Onita and this means that he will be competing in the future. Hayabusa also appeared, as pictured above, as he has been making further physical improvements since suffering cervical spine injury in October of 2011. Hayabusa showed that he has the ability to stand on his own now and walk with the use of a cane. He stated that his rehabilitation is far from over as this led to Hideki Takahashi stating that he wants to see Hayabusa back in the ring at least one more time. Hayabusa appears to be in full favor of the new FMW revival as those who are in charge have strong intentions of maintaining and further adding to the promotions legacy.

Hideki Takahashi pointed towards the flag in the back as he showed that this new FMW will maintain the logo of the promotions past. It has been 13 years since FMW last held a show with this banner and he hopes that this will show that FMW is being completely restored. He also announced that the promotion will hold smaller tours ever month with this month being a few shows starting on 4/21 and ending with the official debut show on 4/27 at Shinjuku FACE. He announced that 5 shows are being planned to take place in the month of May.

WRESTLE-1′s KAI made an appearance as he stated that it was always a dream of his to compete for FMW as he declared that he will be competing for this new FMW. KAI in the past noting Atsushi Onita as one of the wrestlers he looked up to in the past and mentioning Hayabusa as well. As the two appear to have a friendship before today’s meeting. Andy Wu, Seiki Yoshioka, and Shotaro Ashino were also announced to be competing along with KAI.

NOSAWA Rongai also appeared as he called out Atsushi Onita and the Bakuha-oh (Blast King) belt. NOSAWA stated that he wants that belt and he will face Onita in any type of match. He also named dropped a new group led by him called Monster Gundan (Corps/Army) and mentioned Kazunari Murakami as a potential ally.

[Super Battle FMW News] More details have been released in regards to the rebirth of FMW.

Hideki Takahashi, who originally served under the original FMW as a sales manager, will serve as a representative of the new organization which will be called “Cho Sento Pro-Wrestling FMW“ or in English as Super Battle Pro-Wrestling FMW.

As what was previously mentioned on Puroresu Spirit the debut show will be held on April 27th at the Shinjuku FACE with a couple pre-shows taking place before hand.

As for the wrestlers who will be involved. Choden Senshi Battleranger (Yukihide Ueno), who just celebrated his 25th anniversary as a pro-wrestler, Mammoth Sasaki [FREEDOMS], Tetsuhiro Kuroda [Apache], Hideki Hosaka [FREE], Ricky Fuji [K-DOJO], Flying Kid Ichihara [FREE], and Miss Mongolia [WPA] are the first of 7 wrestlers expected to be involved. It was also mentioned that they are striving to bring in former wrestlers who competed in FMW back in the day as well. The biggest name that is still in question of course being the original FMW founder Atsushi Onita. Battleranger has extended the invitation, but his participation is still open. Also being he has his own new promotion under Cho-Hanabi (Super Fireworks) right now as well.