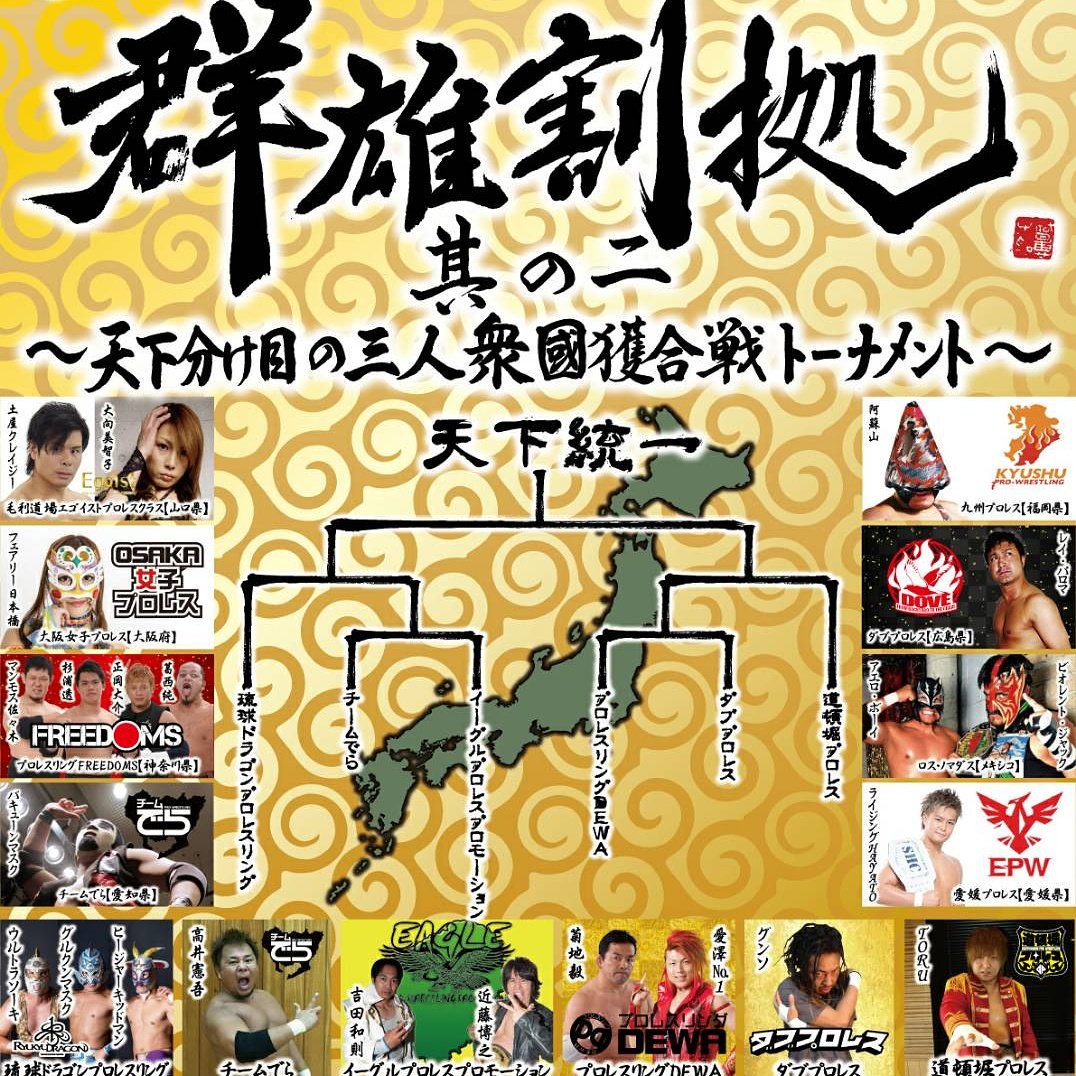 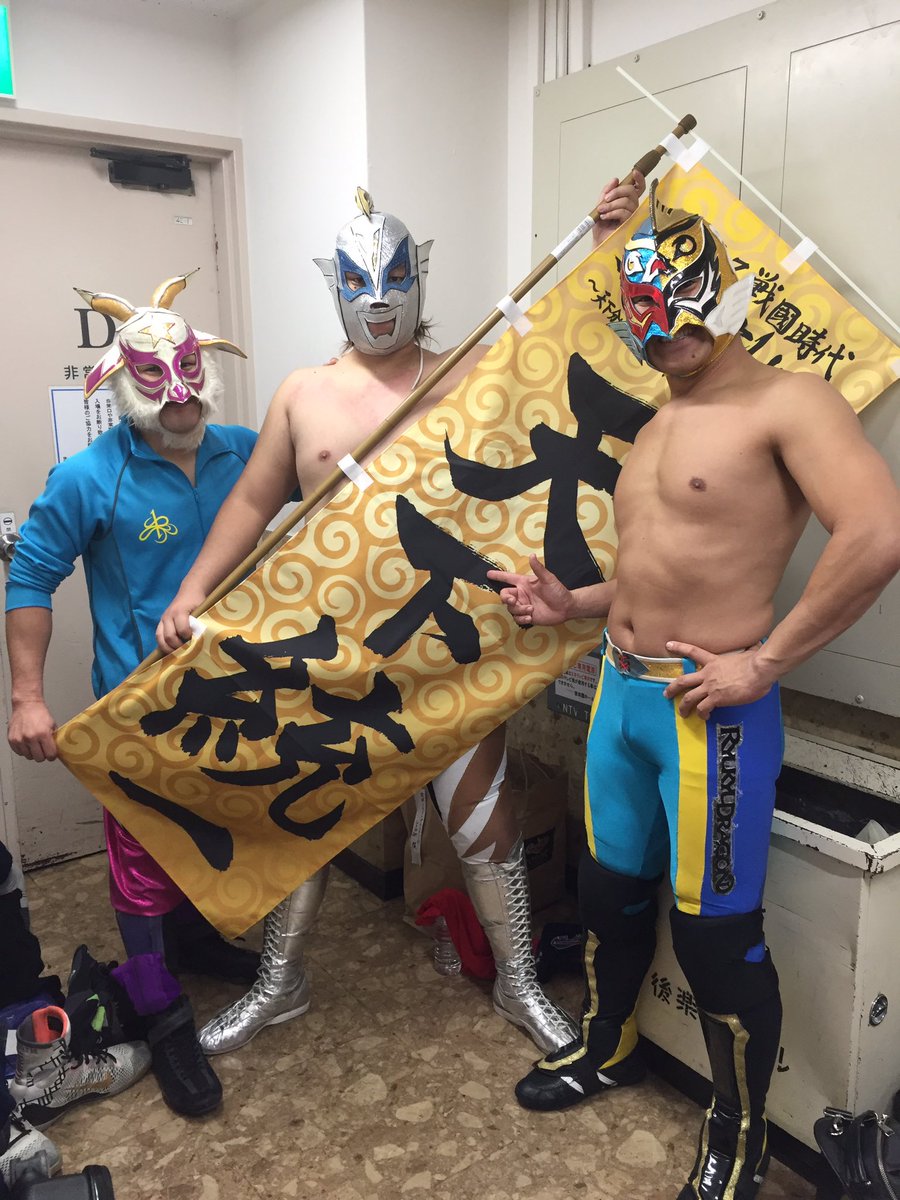 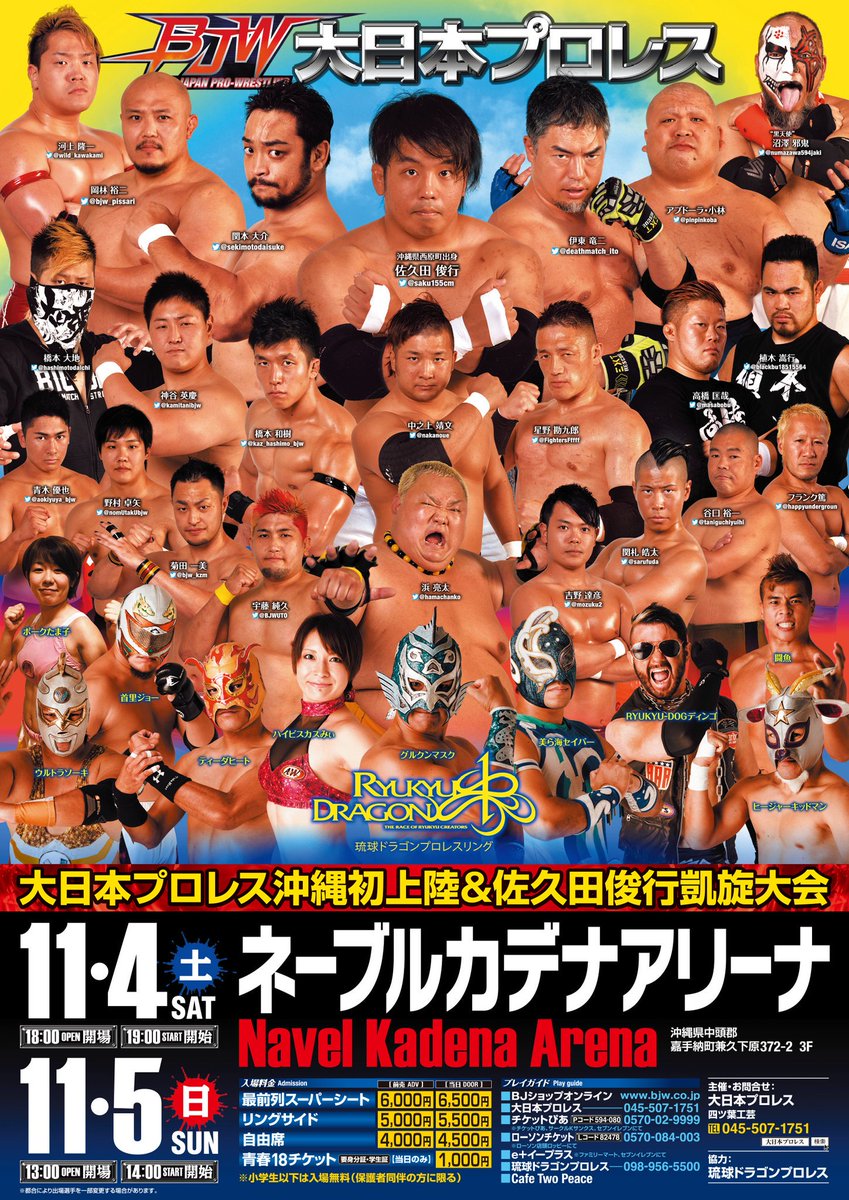 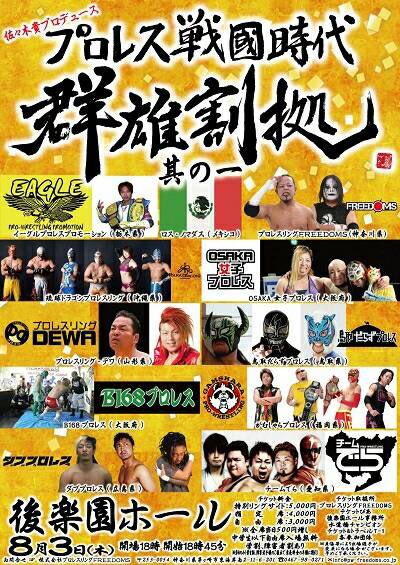 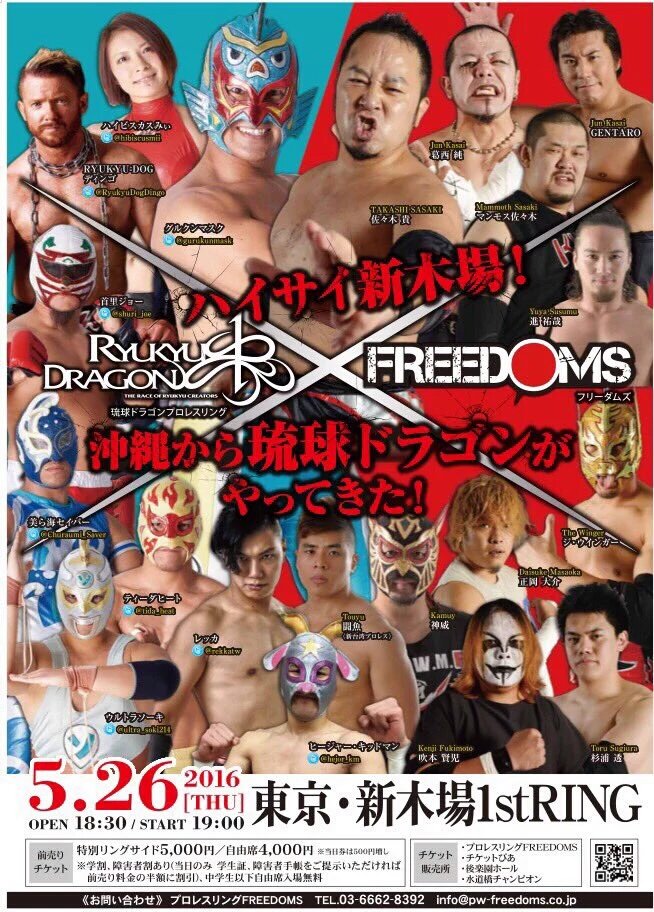 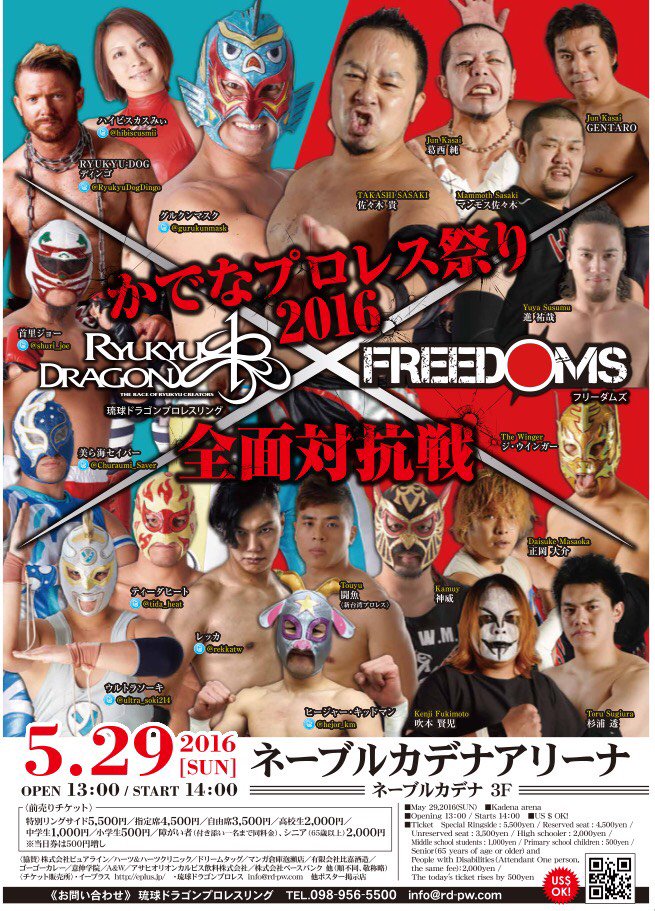 ~ Today saw the finals of the 2016 Champion Carnival which was held in Osaka. 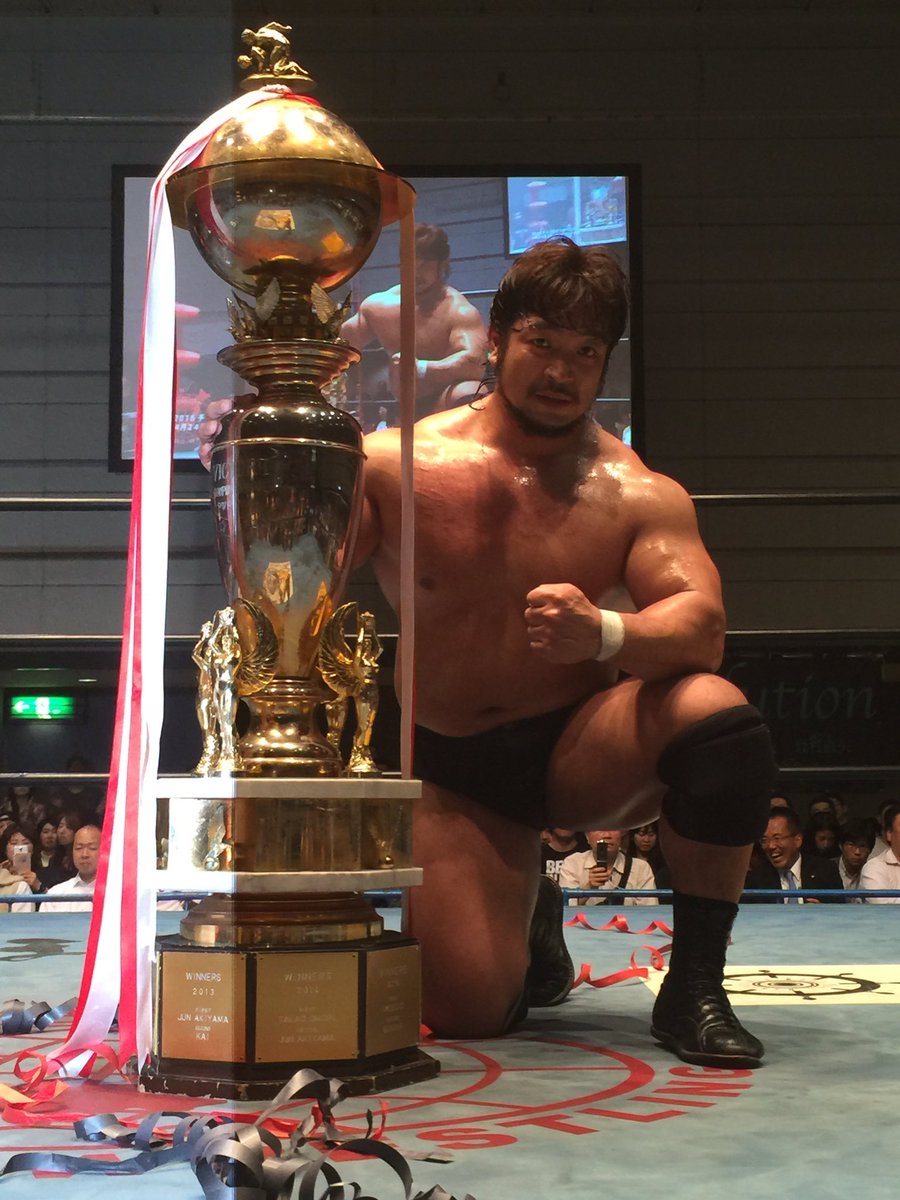 ~ After all the block matches were finished, BJW’s Daisuke Sekimoto managed to claim the top spot in the A BLOCK and Zeus continued his win streak as he solidified his top spot in the B BLOCK. This would lead to the main event as Sekimoto emerged the victor of the power men after a 24 minute match. The two showed respect between one another following the match as Zeus struggled but held up Sekimoto and the trophy on his shoulders.
~ With the big win, Sekimoto then declared that he wants to take all the belts in All Japan. [Side note: Sekimoto and veteran Great Kojika have a shot at the Asia Tag belts coming up in BJW on 4/29.]

~ In the semi-final match of the night, HUB hinted that he would like to seek a World Jr. match against Aoki in the future.

~ Next up for All Japan is the AJ PHOENIX Vol. 2 (rookie centered show) show on 4/27 at Shinkiba 1stRING. 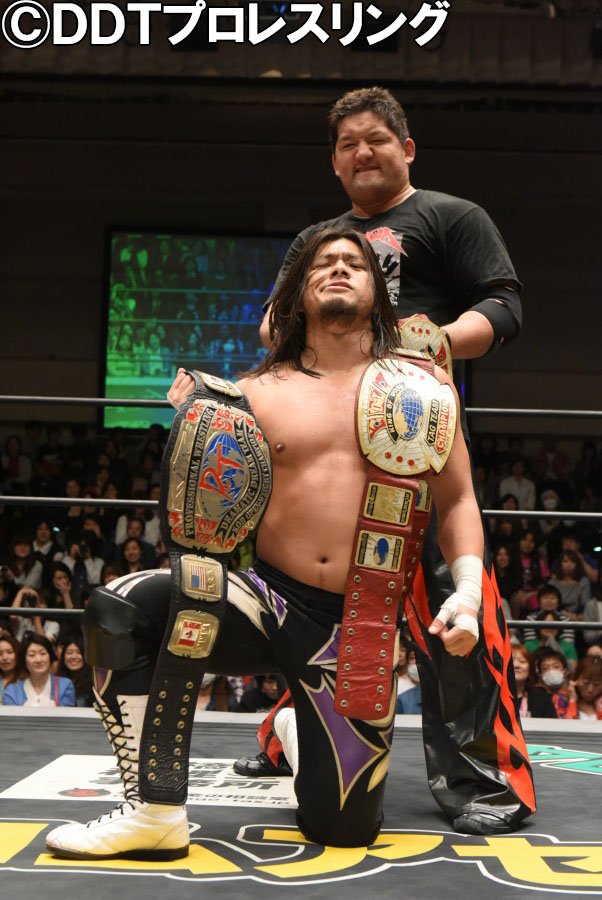 ~ The scheduled main event saw HARASHIMA defend the KO-D Openweight belt against the former sumo wrestler Kazusada Higuchi in a nearly 20 minute match. Though the ever looming threat of the Anytime, Anywhere challengers struck the champion as Daisuke Sasaki cashed in his challenge after the match. The already worn out HARASHIMA was no match for the challenger as Daisuke locked in a Cross Face Lock to capture the belt. 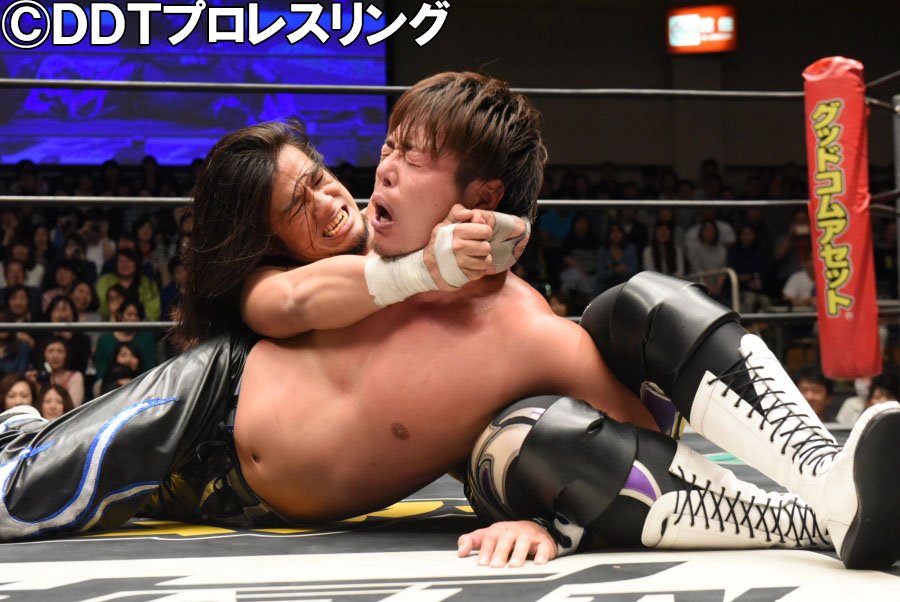 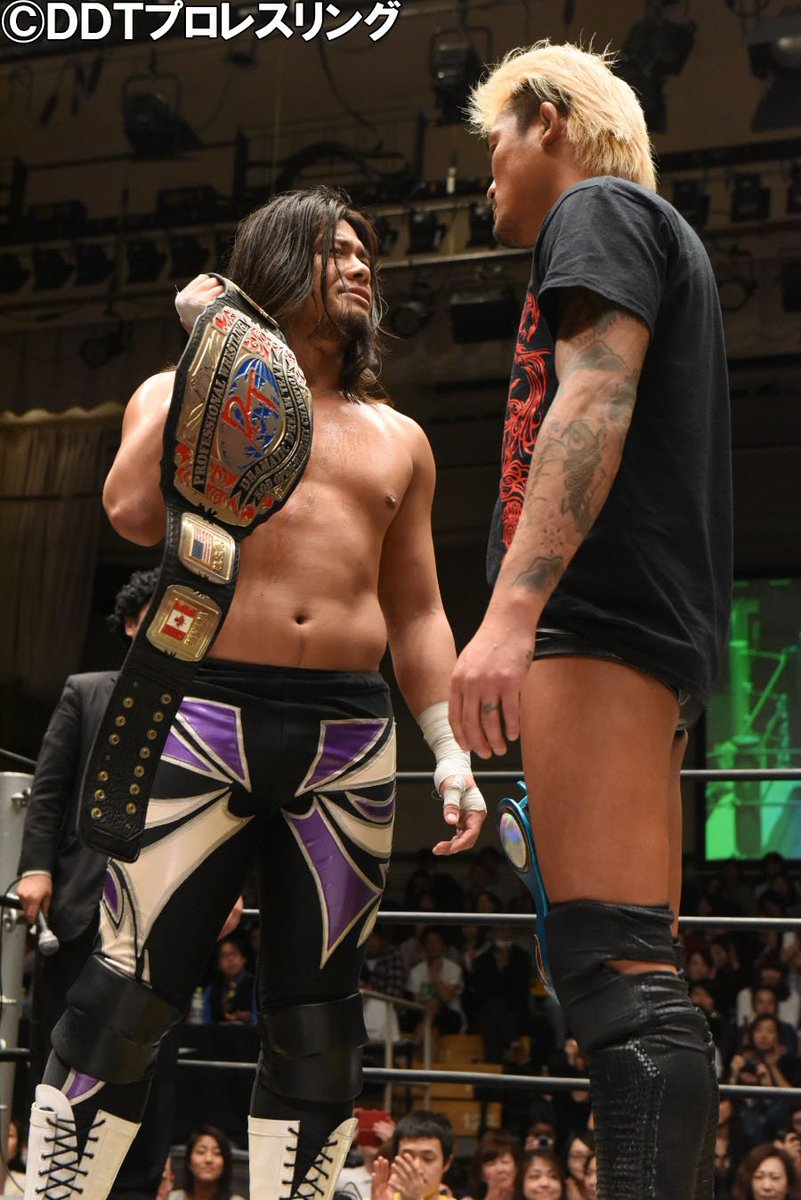 ~ Yukio Sakaguchi then came out to challenge the new champion as the match has been set for 5/8 in Sapporo. 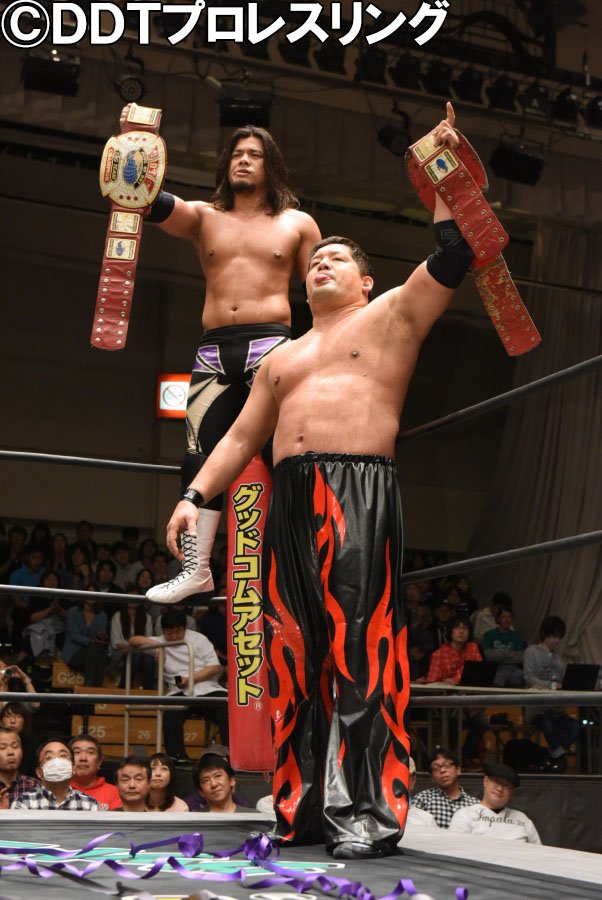 ~ Daisuke Sasaki would become a 2 crown champion as in the semi-final match he and Shuji Ishikawa successful defended the KO-D Tag belts against Konosuke Takeshita & Tetsuya Endo.  Following the loss, Takeshita and Endo have announced that they will be splitting as a team. (Update: At least Takeshita hinted at this being the case.) 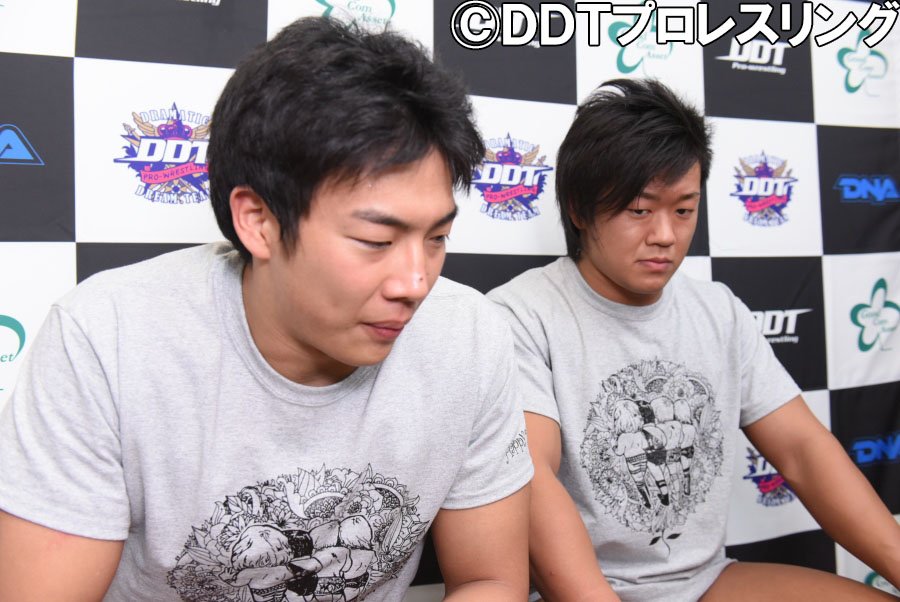 ~ Akito and Urano came forward to confront the champions as they will receive the next title match on 5/15 in Nagoya. After winning a contendership match earlier in the night. 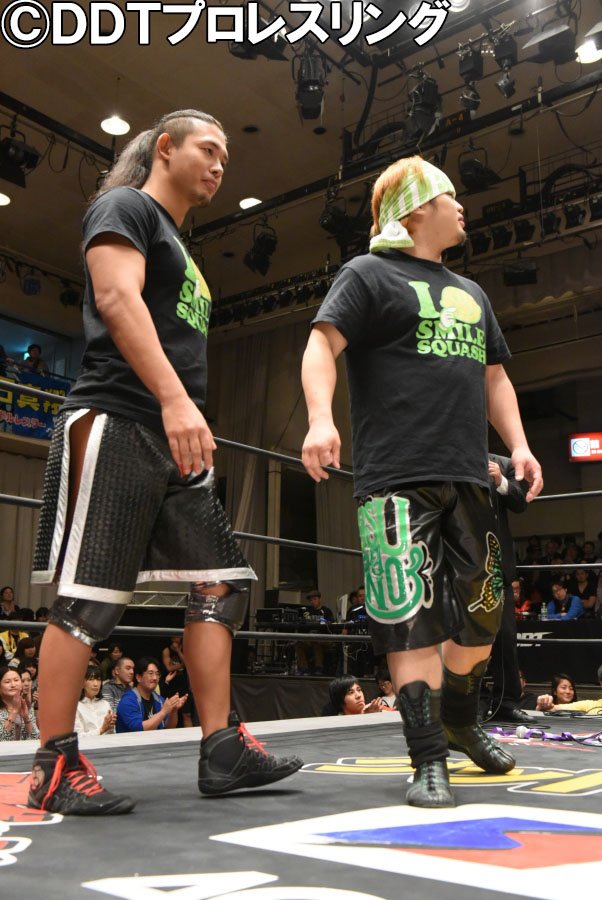 ~ Super Sasadango Machine defended the DDT EXTREME belt against Kazuki Hirata. This led to LiLiCo challenging Sasadango for a shot at the belt after the match. Which speaking of LiLiCo, she lost the Iron Man Heavy Metal belt to Saki Akai earlier in the day. 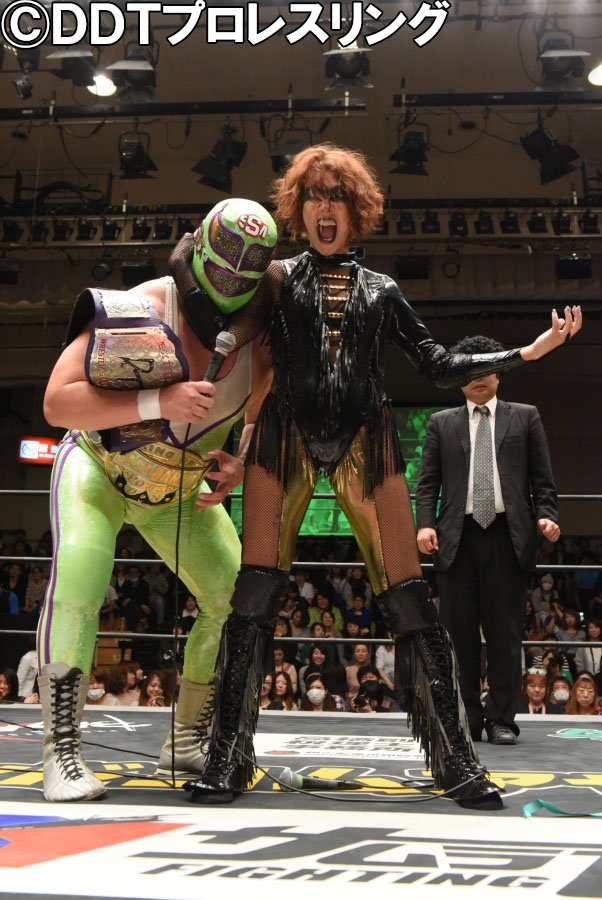 ~ Then Keisuke Ishii formally announced that Team Drift (Team Dream Futures, along with Shigehiro Irie and Soma Takao) would be splitting after suffering a loss in the tag contendership match.

~ Gota Ihashi also once more became the King of Dark Champion after suffering a loss to Hoshitango.

~ W-1’s Jiro “Ikemen” Kuroshio made his presence known in DDT as he appeared as Sanshiro Takagi’s mysterious tag partner in the scheduled 6 man tag. After the match Mizuki Watase challenged Ikemen for a singles match at the next DNA show on 5/11.

~ The “Road to Wrestling Dontaku 2016” continued at the Korakuen Hall today. 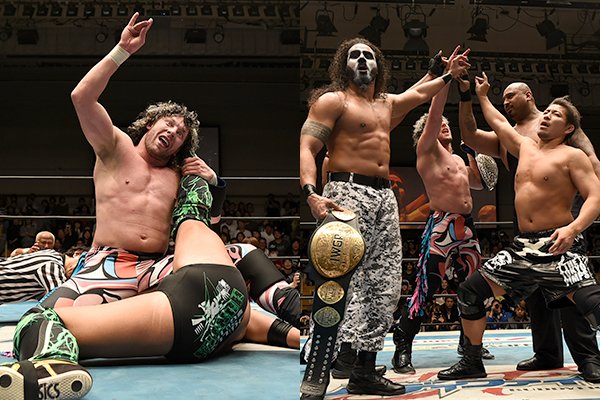 ~ The main event saw New Japan taking on BULLET CLUB in an elimination match, as Kenny Omega would remain the sole survivor with the Katayoku no Tenshi on Yoshitatsu. BULLET CLUB celebrated the win as they still appear to be a unified group though with the loss of members earlier this year. 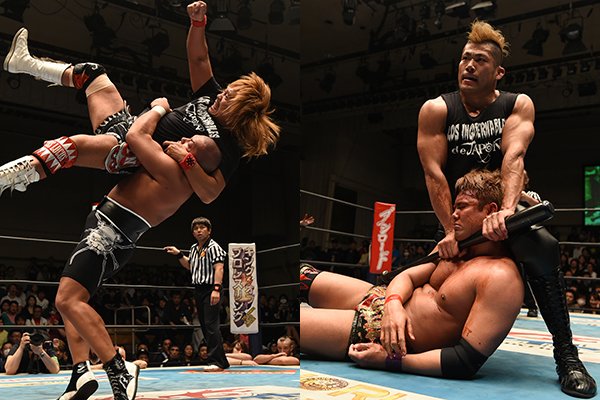 ~ CHAOS and L.I.J traded losses in the scheduled tag match as Ishii took out EVIL and SANADA with the win over Gedo. Ishii with a strike back at Naito in prelude to the upcoming IWGP Heavy title match and SANADA continues to maintain the lead over Okada. 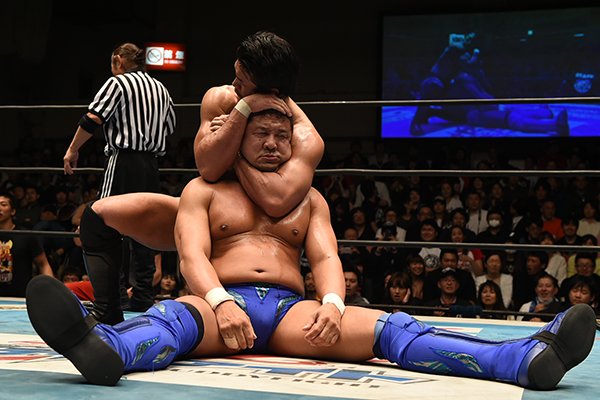 ~ Shibata took out Nagata with a sleeper after their scheduled tag match. KUSHIDA and Liger were also to focused on one another. KUSHID also locked on an armbar on Liger outside the ring as he would not let it go for nothing. KUSHIDA seeking revenge for the loss at yesterday’s show. 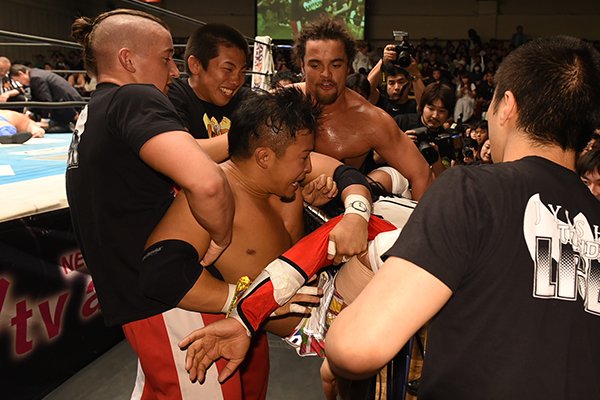 ~ The third day of the GTL took place today in Nara. 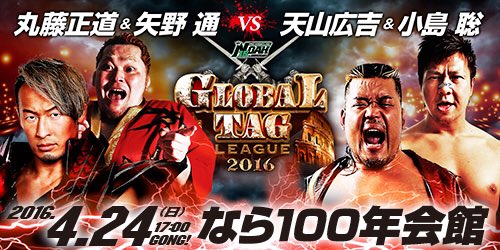 ~ Marufuji and Yano would continue their losing streak as Tenzan and Kojima emerged the victors in the main event match. Sugiura and Benjamin claimed another win today over Yone and Storm then Archer and Smith maintain their dominance as they took out Nakajima and Kitamiya.

~ In the non-GTL matches, Ohara claimed a win over Kanemaru’s team as he looks to capture the GHC Junior belt on 5/4.

~ BASARA : Kobayashi vs Fukuda and Kodaka and Masamune versus Iwamoto and Hi69 was added to the upcoming show on 5/3.

~ DG : Tozawa, Yoshino & T-Hawk made their 4th successful defense of the Triangle Gate belt against Susumu, Saito & Horiguchi. Tozawa (20:27) with a German Suplex Hold on Horiguchi.

~ GUTS World : [4/24 RESULTS] Daisuke defended the GWC Single belt against Buffalo today, and now moves on to face Mr. Gannosuke on 5/8 at Korakuen.

~ OZ Academy : Mayumi Ozaki stripped Sonoko Kato of the belt today as the title match between Kato and Hiroyo Matsumoto was deemed with no conclusion. It was then announced that Ozaki and Kato will compete on 7/18 to determine the rightful champion.

~ TAKA & Taichi held their produce show at the Shinjuku FACE. The main event would see Gedo claim the win a 3WAY Tag match with a win over the contenders for the GHC Tag belts. The belt was not “officially” contested for the GHC Jr. Tag belts though TAKA & Taichi tried to book it as such.
~ The GHC Jr. Tag belts will though be defended on 3/19 at the Korakuen Hall as scheduled.

~ ZERO1 held their “Anata no Wrestlers” show at the Shinkiba 1stRING.
~ It was announced that Kenta Kobashi will be present for the upcoming Yasukuni Shrine show on 3/27.

~ Michinoku : MichiPro announced that there Korakuen Hall show will be held on June 10th.

~ Ryukyu Dragon : It was announced that Taiwan wrestler Rekka will be graduating from his training in the promotion on 4/24. Though the other wrestler from Taiwan, Togyo, will continue competing.

~ Ice Ribbon : Satomura, Toyoda, Ohata, Hiroyo, Makoto, and Nagahama will be competing on the 5/4 show in Yokohama.
~ Akane Fujita suffered a fracture to her ice socker and will miss all upcoming shows, 3/19 and 3/21 more specifically.

~ REINA : Maki Narumiya will be giving up the CMLL-REINA International belt due to her imminent retirement. Syuri will also be relinquishing the REINA Tag belts.