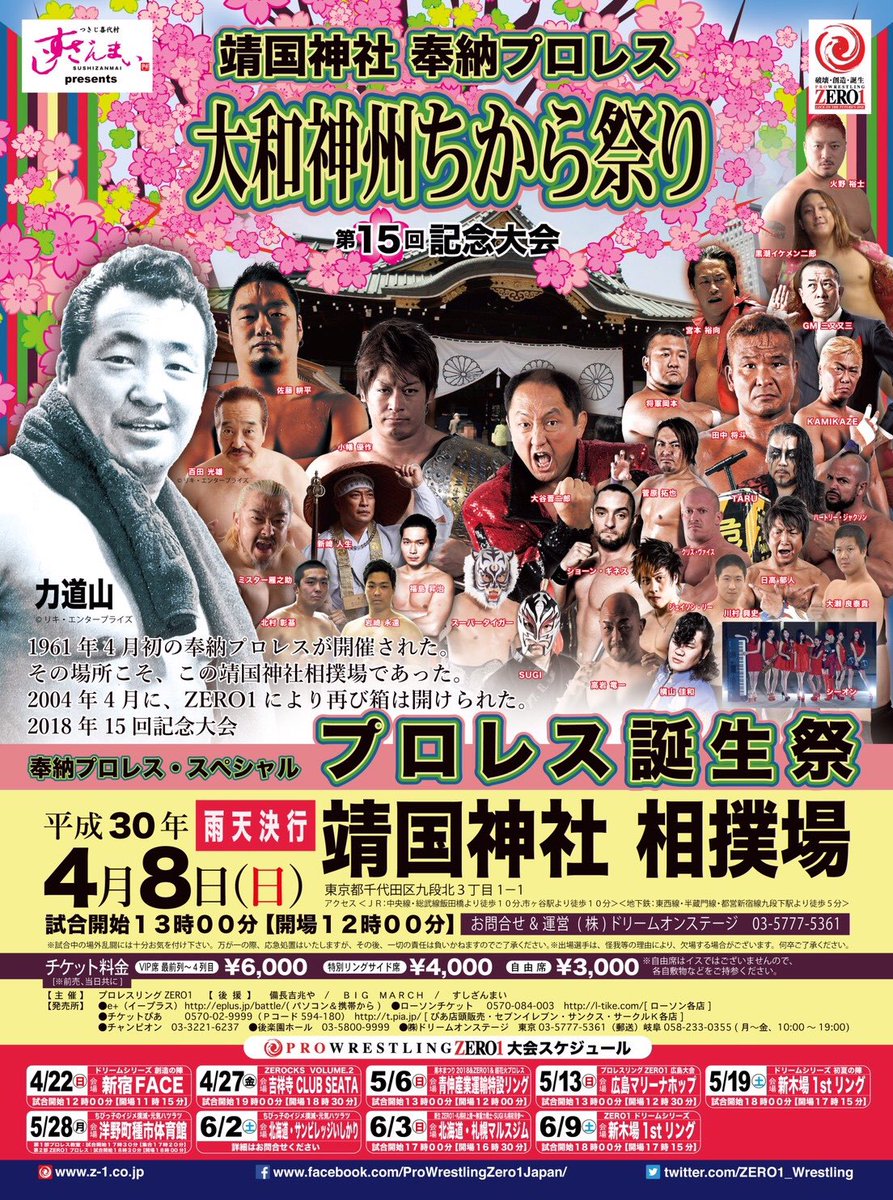 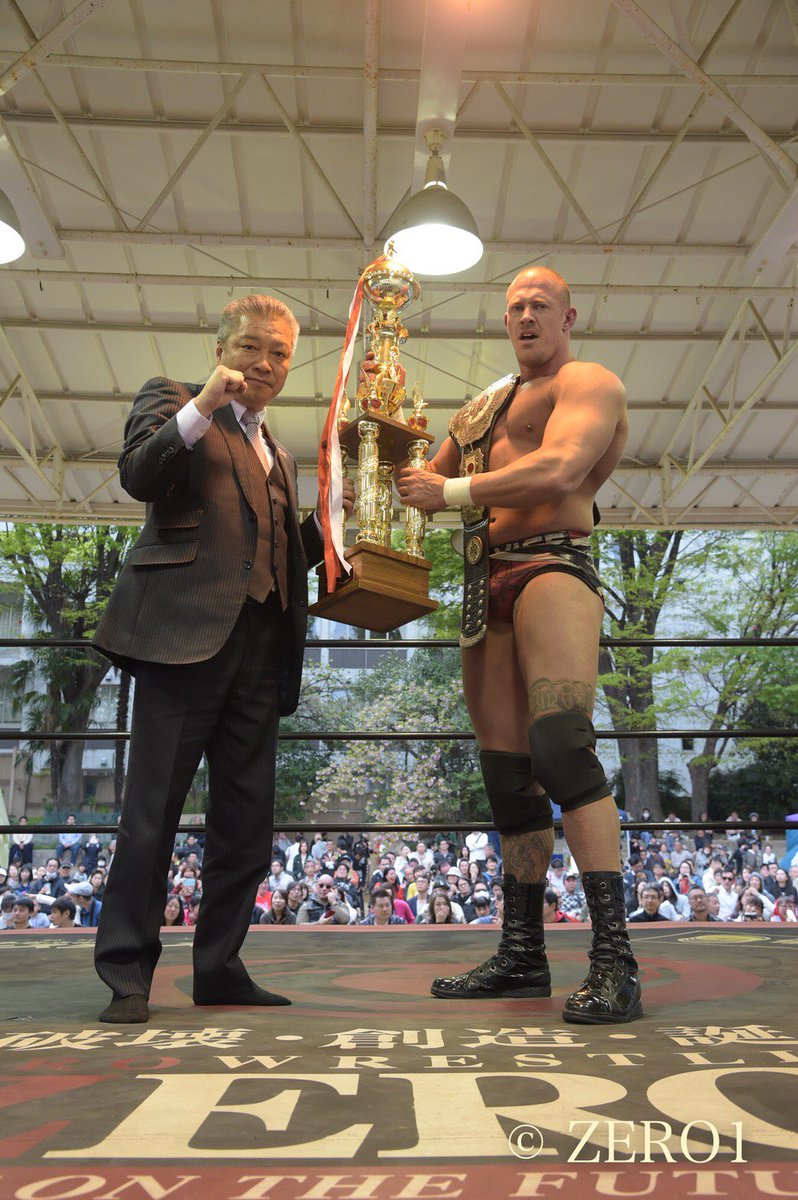 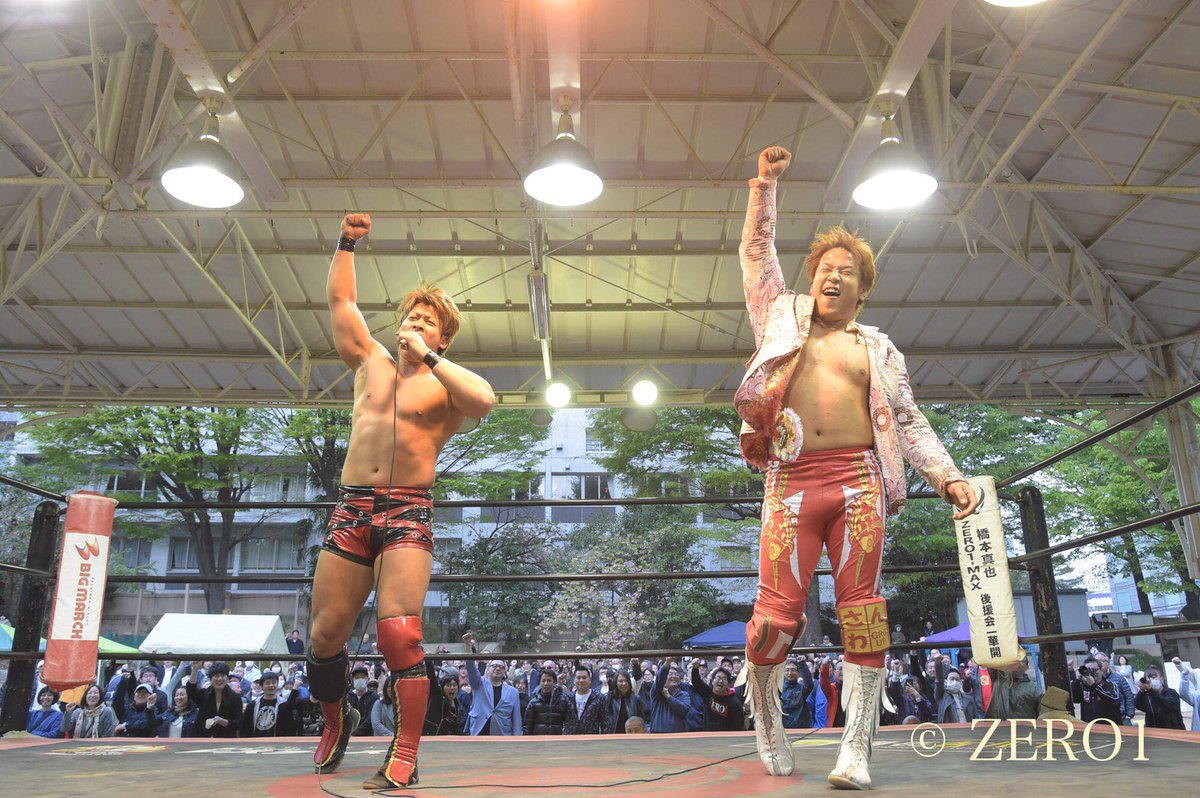 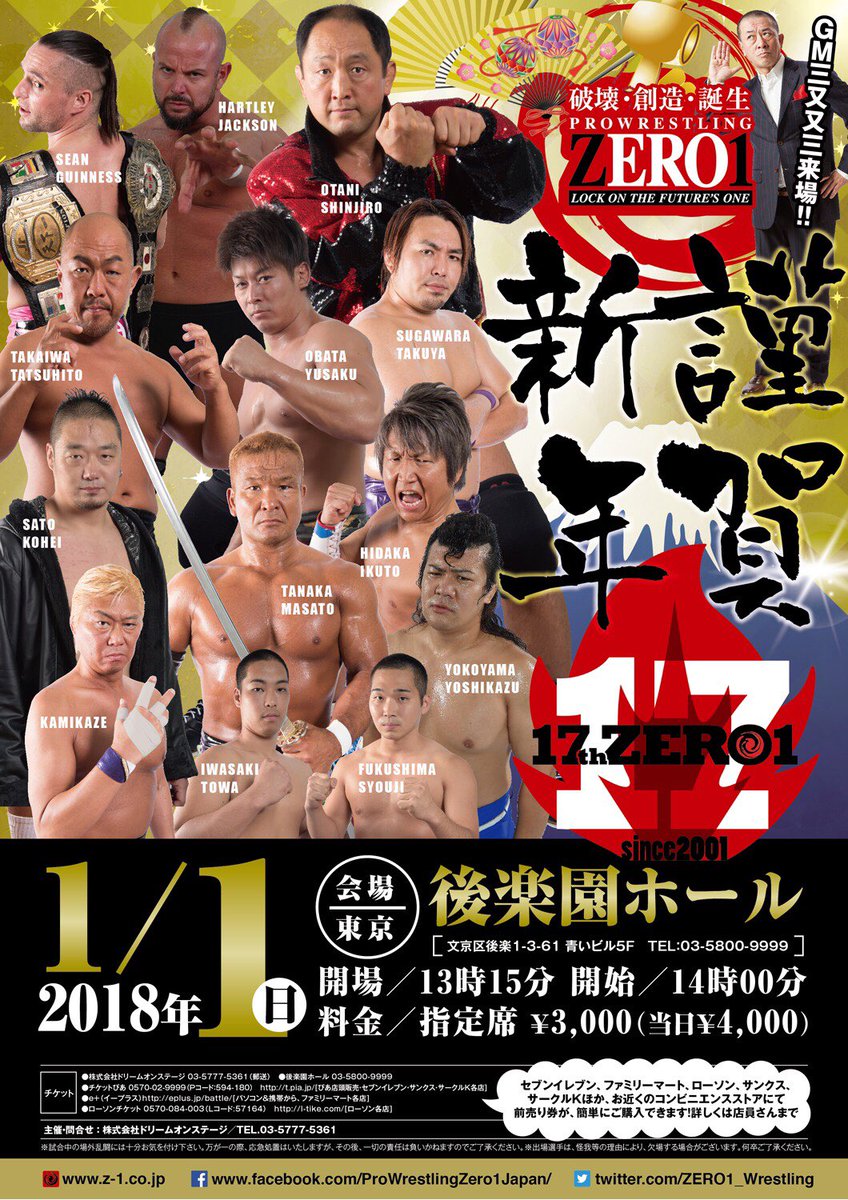 ~ It was announced that SUGI would be joining as a member of ZERO1 with the start of the new year.

(1) ZERO1 vs W-1 Rookies : Towa Iwasaki & Shoji Fukushima vs. Tsugataka Sato & Ganseki Tanaka
◆Winner: Ganseki (11:06) with a Boston Crab on Iwasaki.
~ The Z1 rookies declared that they shall get the revenge during the backstage interview.
(2) Shinjiro Otani & Yuko Miyamoto (666) vs. TARU & Yuji Hino (FREE)
◆Winner: Otani (13:20) following a Face Wash on TARU.
~ A mysterious wrestler in a black mask came out with TARU and Hino. Which after the match the masked wrestler attacked Miyamoto with a low blow and a Shooting Star Press.
~ The masked individual then removed their mask to be reveadled as Asuka, who is known as “Japan’s first gender-less wrestler”, from WAVE, and made themself known to be a member of TARU’s Voodoo Murders. 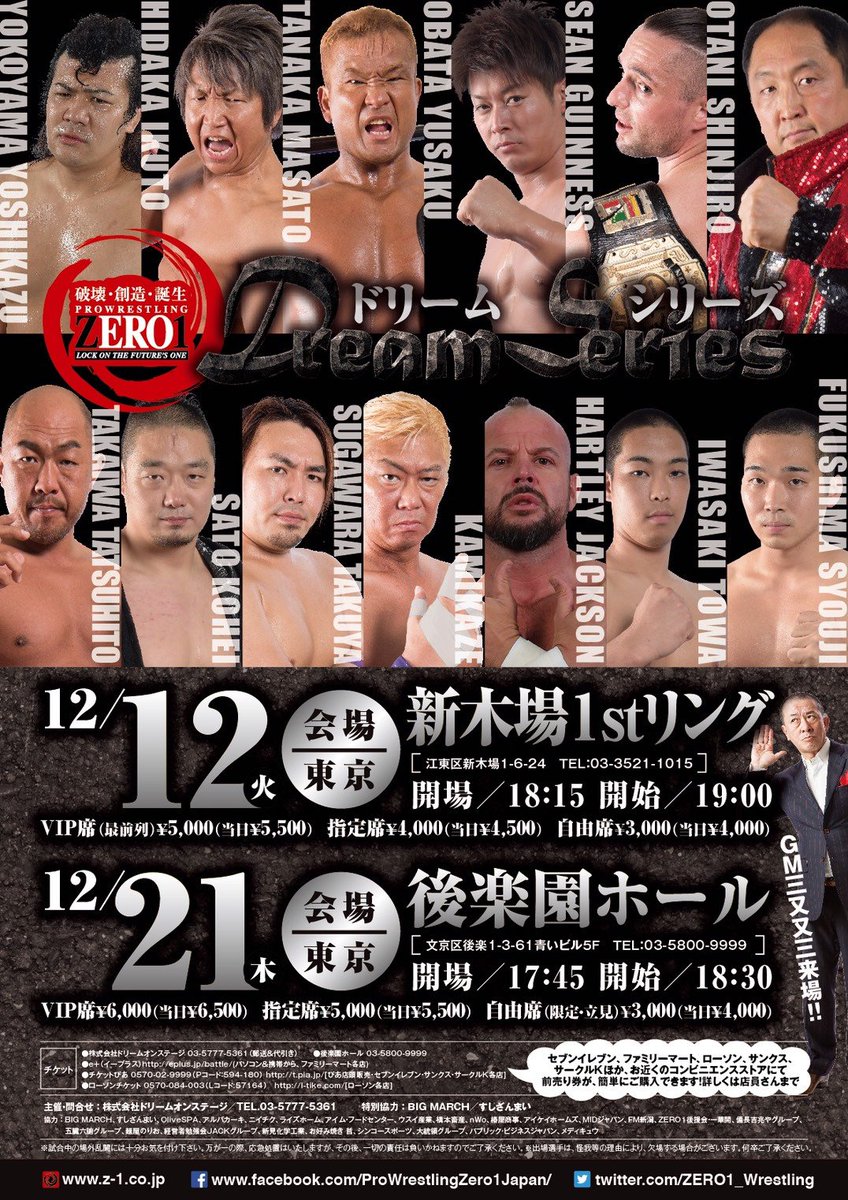 (5) Shogun Okamoto & Yutaka Yoshie (both FREE) vs. Ikuto Hidaka & Takuya Sugawara
◆Winner: Okamoto (14:11) with the Peshawar on Hidaka.
~ Masamune appeared and physically made it known that he will team with SUGI for the upcoming Light Tag title challenge on New Year’s Day. (5) NWA International Light Heavy Tag Championship Match: [Champions] Ikuto Hidaka & Takuya Sugawara vs. [Challengers] SUGI & PSYCHO (both FREE)
♦Winner: Hidaka (11:49) following the Takatsugawa on PSYCHO.
~ 3rd successful title defense.
~ Takafumi Ito and Rocky Kawamura appeared, as Ito locked Hidaka in a sleeper out of nowhere and Kawamura with the Balboa Blow on Sugawara, the Pancrase duo then made the challenge for the belts.

(6) Otani & Takaiwa 25th Anniversary Match:  Shinjiro Otani & Tatsuhito Takaiwa vs. Tatsumi Fujinami (DRADITION) & Koji Kanemoto (FREE)
♦Winner: Kanemoto (21:33) with a Moonsault Press on Takaiwa.
~ Otani addressed the attendance, as 613 in total, though in a positive fashion as he thanked every one of them for coming today.
~ Respect was shown between all four veterans after the match.

(7) World Heavyweight Championship ~ Hardcore Match: [21st Champion] Masato Tanaka vs. [Challenger] Yuko Miyamoto
♦Winner: Tanaka (21:07) following a Barrage of Sliding D’s.
~ 4th successful title defense.
~ Yusaku Obata stepped forward to make the challenge as a rematch from the finals of this years Fire Festival.
~ Though Miyamoto stepped in and asked to form an alliance with Obata for the upcoming Furikazan Tag League. Which Obata agreed.

(5) NWA UN Heavyweight Championship Match: [Champion] KAMIKAZE vs. [Challenger] Yusaku Obata
◆Winner: KAMIKAZE (16:01) with a Moonsault Press.
~ 1st successful title defense.
~ KAMIKAZE put his name forward to be involved in this years Fire Festival. He also put forth a challenge to any foreigners who wish to challenge him for the belt.

(7) Shinjiro Otani & Yoshikazu Yokoyama vs. KAMIKAZE & TARU
◆Winner: Yokoyama (13:21) following a Spinning Death Valley Bomb on TARU.
~ TARU stated that his not the end of the war and said that the takeover is still imminent.
~ Yokoyama appeared to have gotten a positive reaction from the fans for his victory tonight.

(9) NWA Intercontinental Tag Championship Match: [30th Champions] Masato Tanaka & Takashi Sugiura (NOAH) vs. [Challengers] Daisuke Sekimoto & Kazuki Hashimoto (both BJW)
◆Winner: Sugiura (23:02) following the Olympic Qualifying Slam on Kazuki.
~ 1st successful title defense.
~ Kazuki Hashimoto made it known to Shinjiro Otani that he wants to compete in this years Fire Festival.
~ Kohei, Hideki, Tama, Sekimoto, Obata, Daemon, and KAI also came out to make it known that they want to be in the FF as well.

[ZERO1 News] Pro Wrestling ZERO1 held a press conference for the upcoming matches between Akebono vs. Atsushi Onita and Daichi Hashimoto vs. Daisuke Sekimoto on November 6.
Daichi would be up first for the press conference, Sekimoto did not attend, but Daichi can be noted as saying that he is looking to make his breakout as a singles competitor now. He has a tough challenge set before him with Sekimoto, but the upcoming match could be a major break for his career whether he wins or loses.

Next up is the meeting of Akebono and Atsushi Onita. The two are set to face off in the main event of the show in a Lumberjack Deathmatch.
During the press conference more information was released in regards to the rules of the match.
Akebono and Onita will each be allowed to have 4 Lumberjacks at ringside in their respected corners of the ring. None of the lumberjacks will be allowed to enter the ring. Weapons will be allowed, but the only way to win is by pinfall, submission, or KO in the ring.
Akebono previously announced that his tag partner in All Japan, Ryota Hama, will be one of his lumberjacks, so that leaves 3 others and that falls perfectly with his ZERO64 team of Takuya Sugawara, Mineo Fujita & Daisuke Sekimoto. As for Onita’s lumberjacks I can only suspect that Ichiro Yaguchi will be one of them.
Akebono even issued a challenge of his own, that if he loses ZERO64 will be disbanded.

Below is the full card for show (the match order will be determined on 11/6).

[ZERO1 News] Pro Wrestling ZERO1 announced that Akebono will be making his return to the ring as he faces off against Atsushi Onita in a singles match on November 6. As many of you should know, Akebono had to spent the last month and a half

out due to illness and has overcome it and is ready to return to competition. Akebono made the call out to Onita at ZERO1’s October 16th show and said that he will accept Onita’s rematch at anytime.

ZERO1 also announced that Yuhi will be making her return to the promotion after spending the last 6 months competing mainly in Stardom. The 17 year old rookie made her debut in ZERO1 back in April and after spending time away appealed to her main trainer Ikuto Hidaka for her to once again compete in the ZERO1 ring.

[ZERO1 News] Another title match has been announced for their upcoming Korakuen Hall show on October 6 as Tanaka & Zeus will defend the Intercontinetal Tag belts against Shito Ueda & Yusaku Obata.
Ueda picked up a pinfall victory over Zeus at ZERO1’s show on October 16th and then called out the champion to defend his tag belts against him and a partner of his choosing.
Both Ueda and Obata have had a very heated past in the last few months, but there seems to be some mutual ground between the two as they aim to become the new champions.