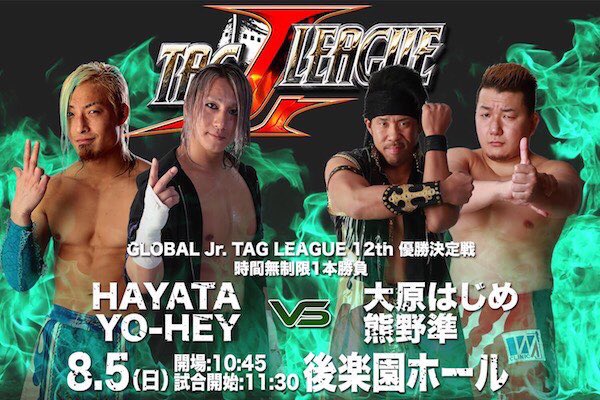 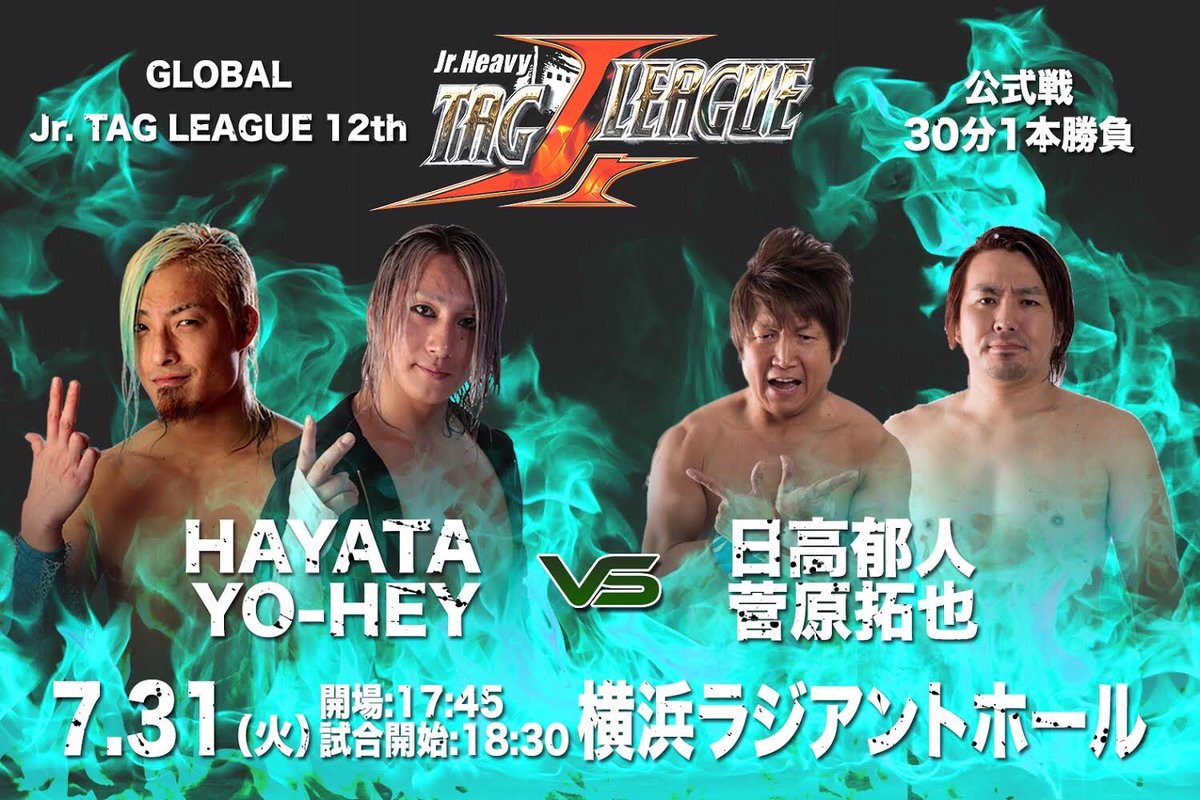 ~ The final match on August 5th at Korakuen will see HAYATA & YO-HEY taking on Hajime Ohara & Hitoshi Kumano. (Hidaka & Sugawara are pushed down to the #3 spot due to a loss to Ohara & Kumano during the league.)

~ The full event card was updated for the 8/5 show… 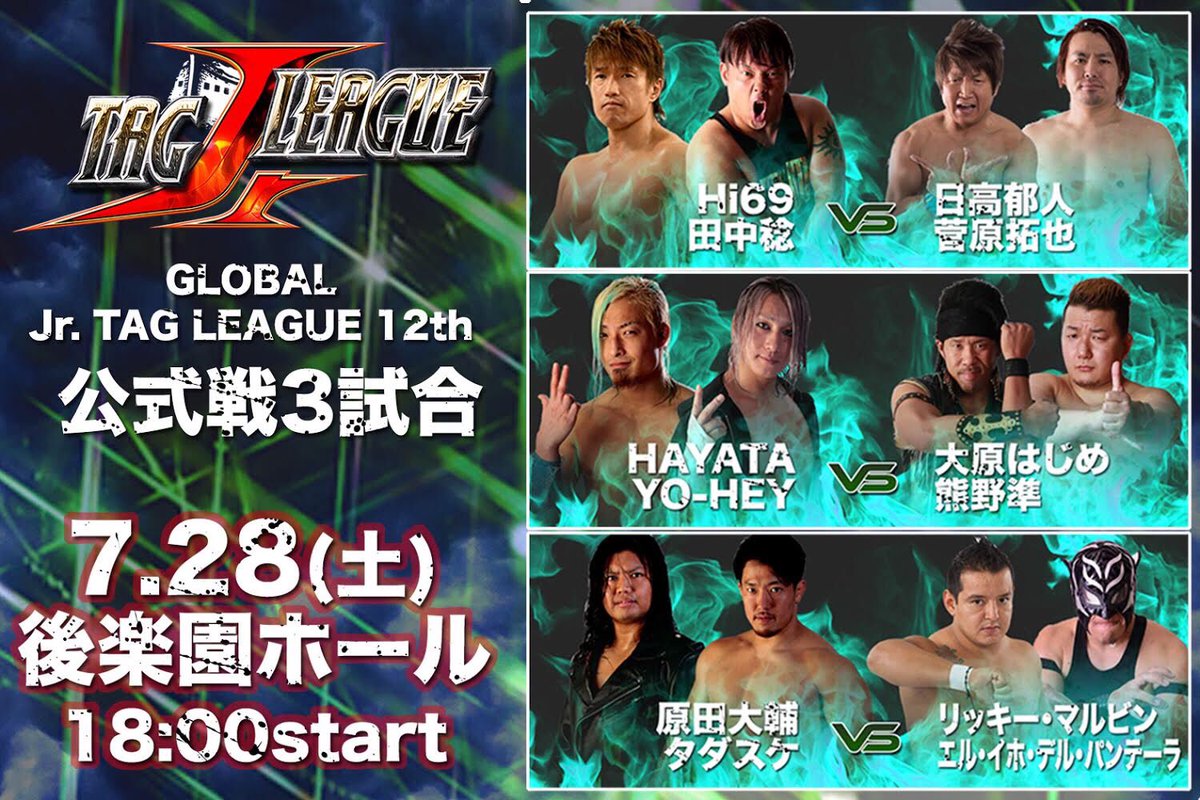 ~ The two upcoming rookies, Yoshiki Inamura and Kinya Okada, greeted the audience to publicly introduce themselves before their debut on August 5th. [Previous news post with their stats.] 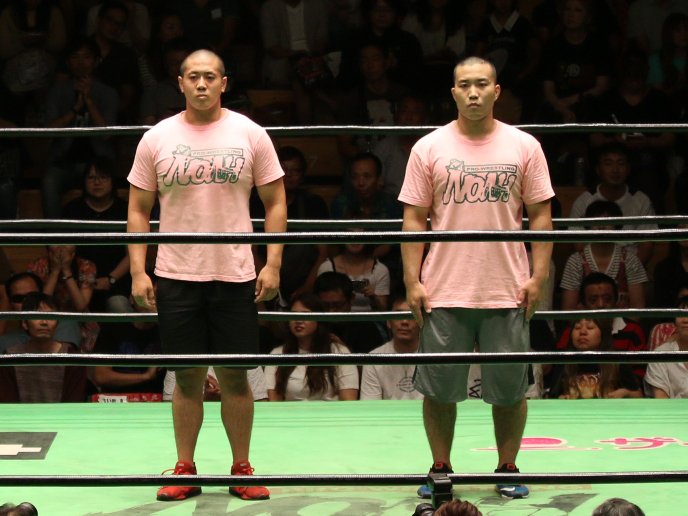 (6) Junior Tag League Match: Hi69 & Minoru Tanaka (FREE) vs. Ikuto Hidaka & Takuya Sugawara (both ZERO1)
◆Winner: Hidaka (16:39) with the Shawn Capture on Hi69.
~ Hidaka/Sugawara [4 wins, 1 loss = 8 points]
~ Hi69/Minoru [2 wins, 3 losses = 4 points]
~ With the win, Hidaka and Sugawara claim the top of the block standings and with only one loss they are in the running for the final (pending the outcome of Ohara/Kumano versus Harada/Tadasuke). 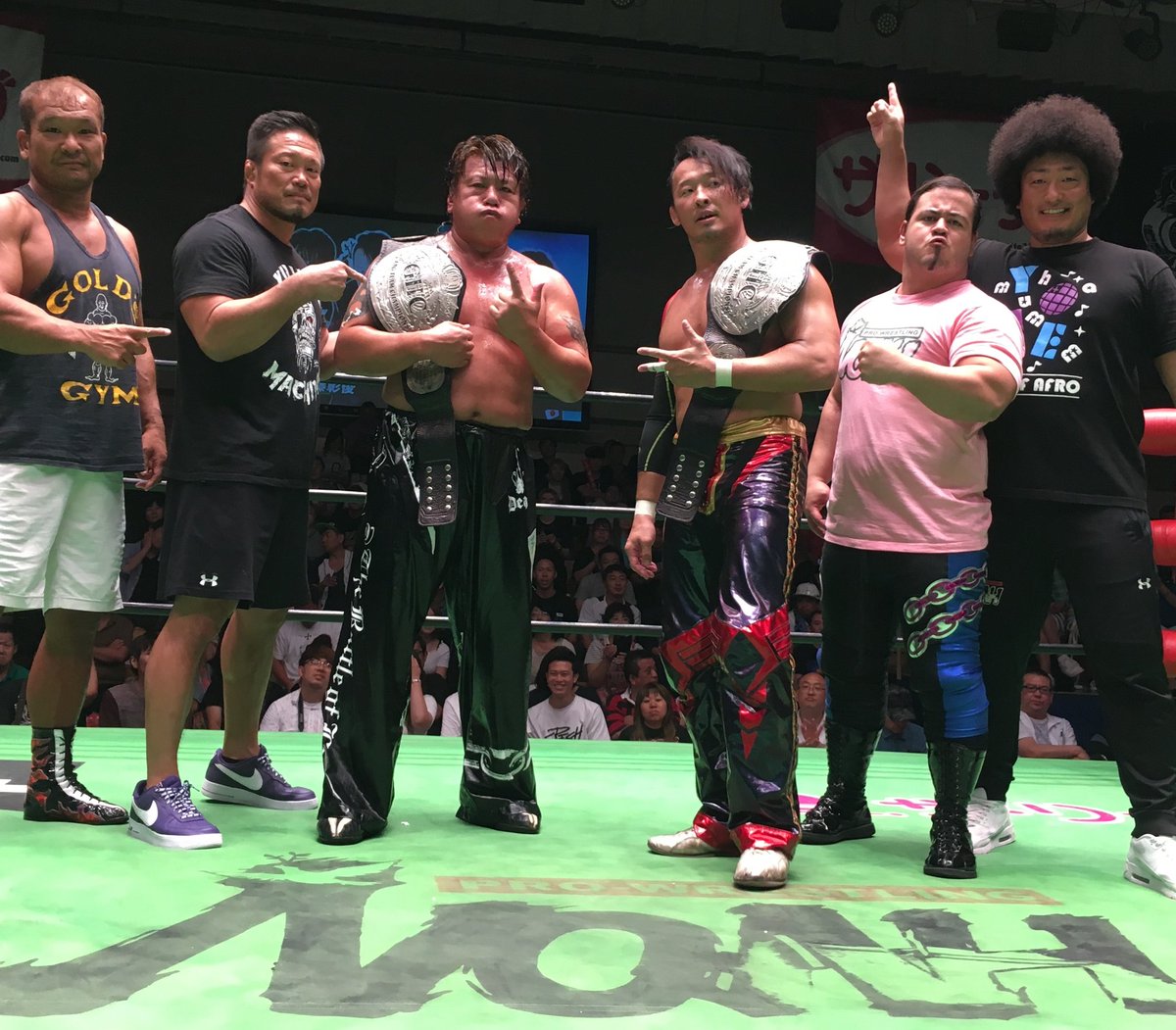 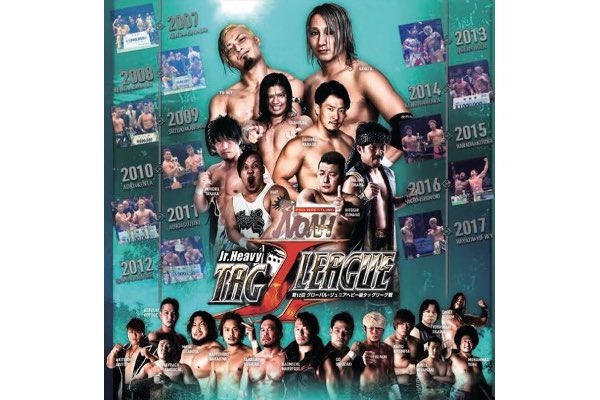 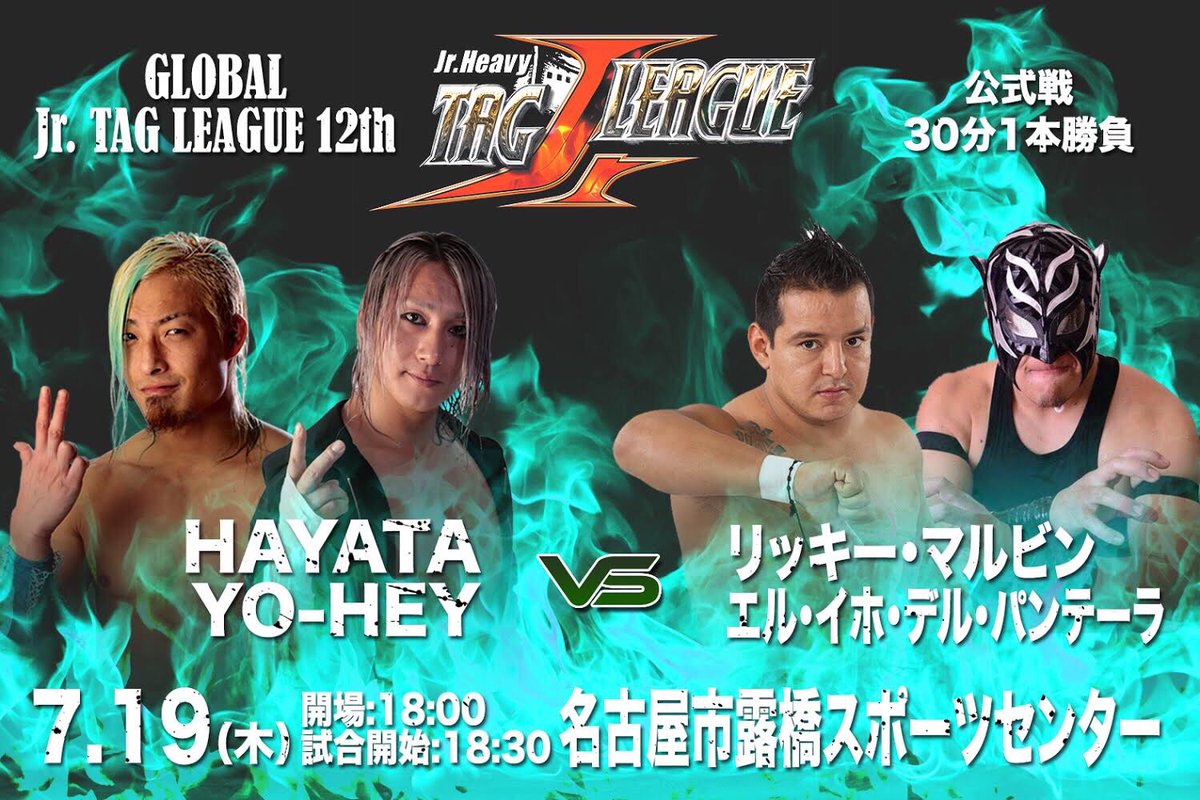 (6) Takashi Sugiura, Naomichi Marufuji, Akitoshi Saito & Muhammad Yone vs. Go Shiozaki, Katsuhiko Nakajima, Masa Kitamiya & Atsushi Kotoge
◆Winner: Saito (19:56) following the Sickle Death on Kotoge.
~ Saito with the win in his hometown arena, as he declared that he and Marufuji will capture the GHC Tag belts on the 28th. 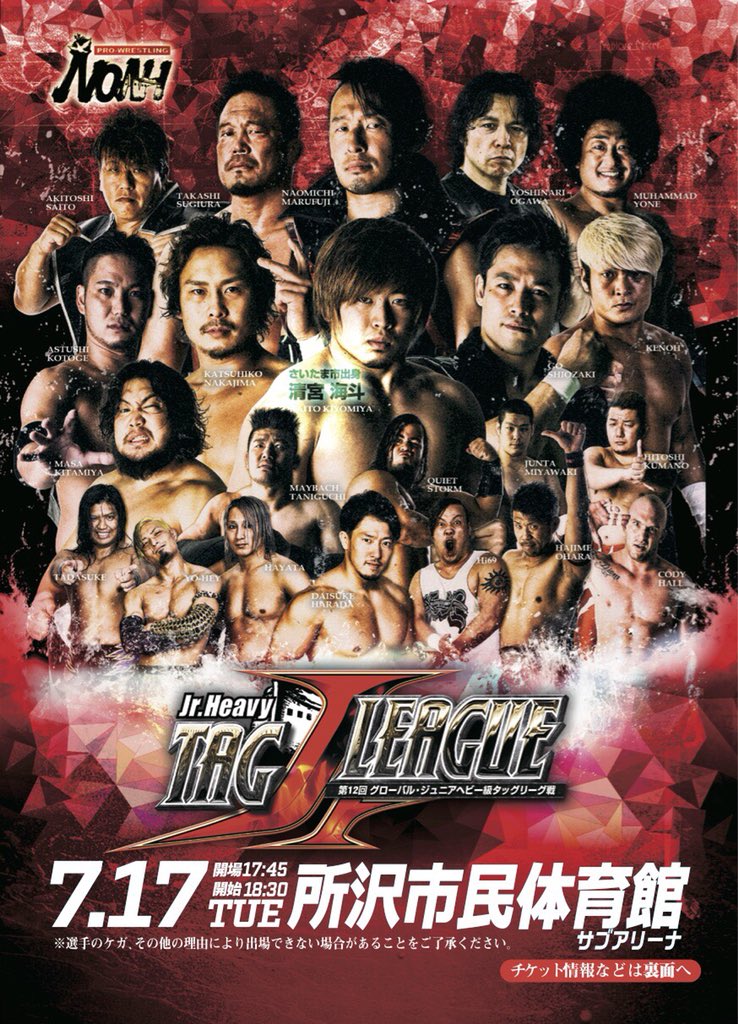 ~ Before the start of the show, Nakajima and Kitamiya came to the ring with a picture of Masa Saito and took part in a 10-bell salute to their fallen teacher. Kitamiya more directly became Saito’s protege as he eventually changed his name from Mitsuhiro Kitamiya to Masa Kitamiya in 2016 to honor his teacher.

(5) Takashi Sugiura, Naomichi Marufuji, Akitoshi Saito & Muhammad Yone vs. Go Shiozaki, Katsuhiko Nakajima, Masa Kitamiya & Kenoh
◆Winner: Kitamiya (11:57) with the Kangokugatame (Prison Lock) on Saito.
~ Kitamiya with a direct honored to his teacher Masa Saito who passed away on July 14th. (Reported on July 16th) Kitamiya declared that he will do his best to carry on the spirit of “Go for Broke” from this day forward. 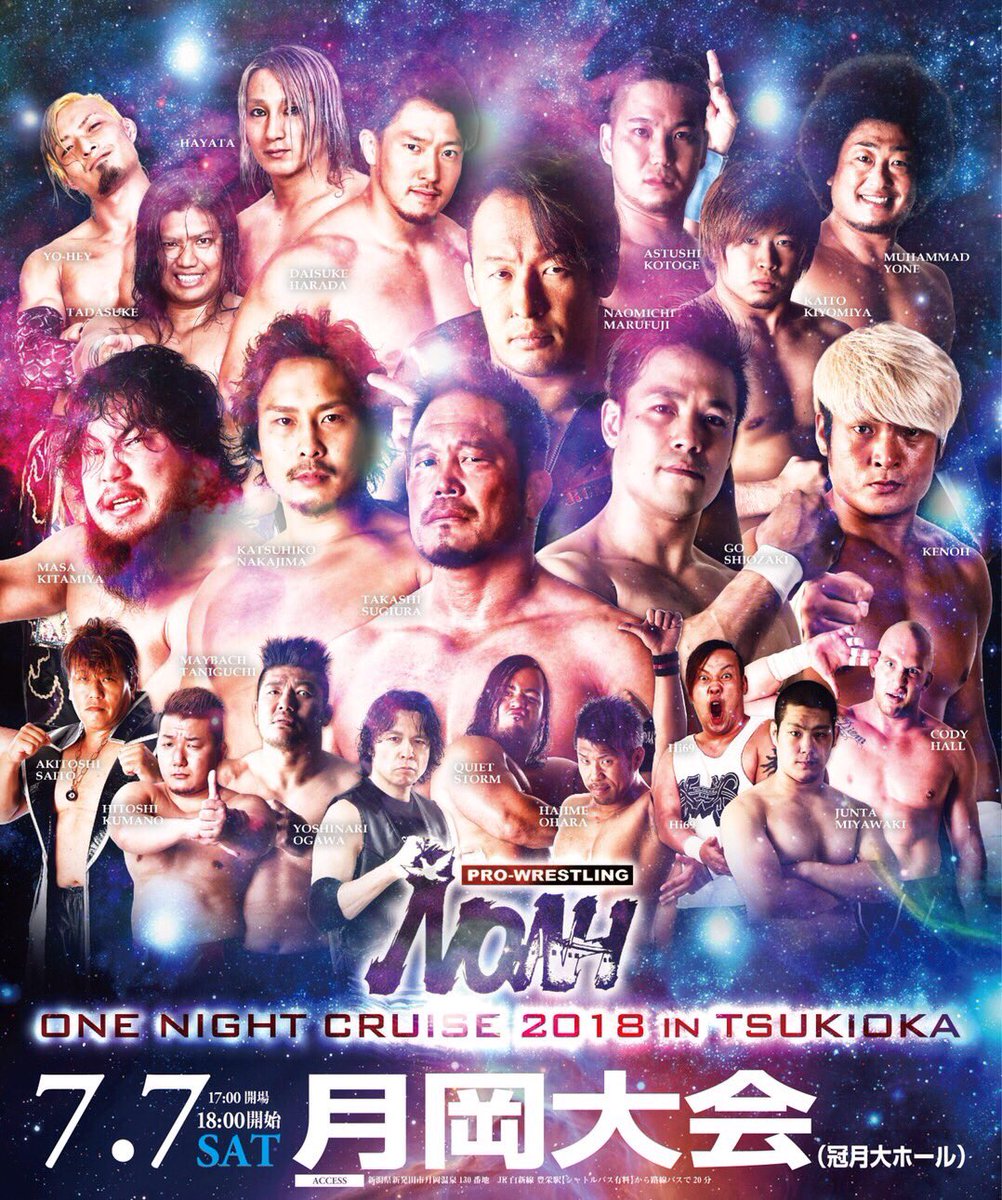 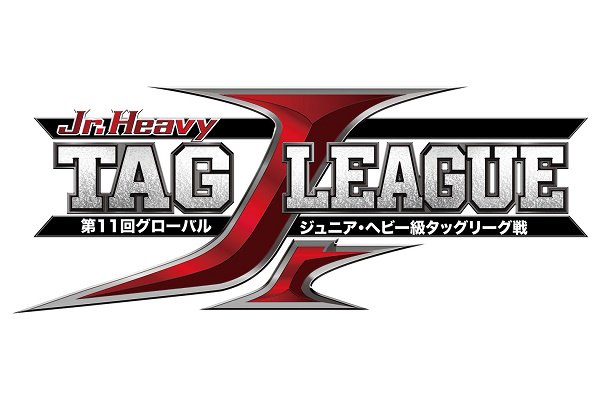 (1) Junior Tag League Match: Kaiser & Gaston Mateo vs. Gurukun Mask & Shuri Joe (both Ryukyu Dragon)
♦Winner: Joe (8:39) with a Falcon Arrow on Mateo.
~ Kaiser/Mateo [2 wins, 5 losses = 4 points]
~ Gurukun/Joe [1 win, 6 losses = 2 points]
~ Team Ryukyu Dragon with the win as they manage to keep from being completely shut out with no points on the board.

~ The final match is now set as Ishimori and Hi69 (XX) will be taking on HAYATA and YO-HEY (RATEL’S) in the final match.

~ Rookie Jyunta Miyawaki was announced to make his debut on August 12 at the Yokohama Radiant Hall.
[Stats: 170cm, 80kg, born on June 14, 1997 from Takamatsu City, Kagawa Prefecture. He has a background in judo through junior and high school. He began training for NOAH in April of 2016 and saw his pre-debut in December of that year in his hometown area.]

(1) Exhbition Match: Akitoshi Saito vs. Seiichi Ikemoto
♦Winner: DRAW (10:00) Time Expired.
~ The former DEEP Welterweight Champion stated that he is eager to compete in NOAH again in the future.

(4) Go Shiozaki, Atsushi Kotoge, Muhammad Yone & Quiet Storm vs. Brian Cage, Cody Hall, KAZMA SAKAMOTO (FREE) & Masao Inoue (FREE)
♦Winner: Yone (12:01) following the Funky Buster Bomb on Inoue.
(5) Kenoh vs. Eddie Edwards
♦Winner: Edwards (10:48) following the Boston Knee Party.
~ Edwards stated that his goal is for the right to challenge for the GHC Heavyweight belt. Which he hopes to acquire the right come win after win by the close of this tour.

(8) GHC Tag Championship Match: [39th Champions] Naomichi Marufuji & Maybach Taniguchi vs. [Challengers] Katsuhiko Nakajima & Masa Kitamiya
♦Winner: Maybach (26:30) with the Maybach Bomb Zwei on Kitamiya.
~ 2nd successful title defense.
~ The Agression once more suffer the loss in pursuit of the tag belts and Nakajima’s claim to become a double crown GHC champion. Though now his focus is solely on the defense against Cage coming up on the 27th.
~ Shiozaki and Kotoge made the bid as the next challengers after the match, as they took out the champions in a physical manner.

(7) Katsuhiko Nakajima, Masa Kitamiya & Muhammad Yone vs. Brian Cage, Eddie Edwards & Cody Hall
♦Winner: Cage (17:17) following the Drill Claw on Yone.
~ Cage continues his dominance with yet another win over Nakajima’s team. Cage declared that the GHC belt is within his grasp. 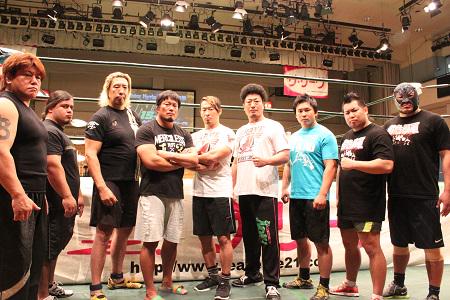 NOAH held a quick press conference with 9 of the NOAH affiliated, under contract and freelance, wrestlers as they discussed the fall-out following the Osaka show this past weekend.
~First and foremost, Takashi Sugiura stated that he is sorry that he was unable to recapture the belt from Suzuki, but he does not want to give up in striving to bring the belts back home to NOAH.
~ Yoshihiro Takayama stated that he is here for NOAH and urged that everyone in NOAH come together to take the belts back.
~ Quiet Storm stated that he will his 100% best from today.
~ Akitoshi Saito stated that he is eager for a chance and aims to see SZKG gone from NOAH.
~ Mitsuhiro Kitamiya stated the he wants to be prepared for the situation at hand. That he will drag and claw himself to see Suzuki-gun has no more of a future in NOAH.
~ Katsuhiko Nakajima said that it is certainly a frustrating situation to witness and to be apart of following his loss to Benjamin in Osaka. He stated that he aims to protect NOAH and wants a rematch against Benjamin specifically in the upcoming Global League. As he asked to be in the same block as him.
~ Muhammed Yone stated that he will not give up and does not wish to see NOAH disbanded. He does not want to see what Misawa built fall likes this. He then mentioned that he does indeed want a chance against Minoru Suzuki, to and to finally showcase himself as a top level wrestler.
~ Naomichi Marufuji then closed the conference by stated that each one of the wrestlers here have united for one goal and that is to see Suzuki-gun dethroned once and for all. That they are all united as of this day going forward and the belts will surely return to where they belong.

NOAH announced all 16 wrestlers that will be competing in this years Global League tournament.

This years tournament is set to run from October 16th to November 8th, both of which to be held at the Korakuen Hall. The official matches and split blocks will be announced soon.

(7) Minoru Suzuki, Takashi Iizuka & Taichi vs. Naomichi Marufuji, Takashi Sugiura & Katsuhiko Nakajima [FREE]
◆Winner: Marufuji (14:12) following the Ko-oh on Iizuka.
~ Maru, Sugiura and Nakajima worked together as a cohesive unit to take out Iizuka in the final moments of the match.
~ Marufuji declared to Suzuki that NOAH will recapture all the belts.
~ Suzuki was livid following the loss as he left the hall kicking chairs and flipping a table.

(8) G+ JTL Final Match: (A BLOCK #1) El Desperado & TAKA Michinoku vs. (B BLOCK #1) Atsushi Kotoge & Daisuke Harada
◆Winner: Kotoge (21:48) following the Kill Switch on TAKA.
~ Taichi tried to get involved in the match, but Ishimori stopped him before any serious damage could be done. Taichi was then forced out of the hall by the officials and other NOAH wrestlers.
~ Momo no Seishun with the Jr. Tag League 2015.
~ President Akira Taue congratulated the winners and presented them with the trophies.
~ Harada stated that he does not want to see yet another defeat for NOAH and he will not see the end of NOAH come. That he will see to it that the belts return to NOAH as he and Kotoge aim for the GHC Jr. Tag belts next.
~ Kotoge stated that he wants to see the smile on the faces of the NOAH fans, as he is glad that he could bring them a cheerful moment.
~ Side note: Buffalo and Billyken, their former sempai’s in Osaka Pro, were watching the match from the entrance area.

(7) Minoru Suzuki, Taichi & TAKA Michinoku vs. Takashi Sugiura, Naomichi Marufuji & Taiji Ishimori
◆Winner: Sugiura (16:37) following the Olympic Qualifying Slam on TAKA.
~ Sugiura with the win in the final prelude match before the title challenge on Saturday.
~ Sugiura declared that NOAH “will not end”, as he aims to finally dethrone Suzuki.
~ Special referee Tiger Hattori and other rules made official for the upcoming match between Suzuki and Sugiura.

(1) Genba Hirayanagi & Captain NOAH vs. Super Crazy & Shiro Tomoyose
◆Winner: Captain (9:50) with the Crossface of NOAH on Tomoyose.
(2) Yoshihiro Takayama, Quiet Storm & Hitoshi Kumano vs. Kenoh, Hajime Ohara & Mitsuhiro Kitamiya
◆Winner: Kitamiya (8:54) following a Spear on Kumano.
~ Takayama hijacked Kenoh’s bamboo sword after the match.
~ Kenoh questioned why Takayama would mess with buddha. (Kenoh and Ohara have become large in the Buddhist faith and have been chanting and praying before and after matches.)
(3) Muhammed Yone vs. Akitoshi Saito
◆Winner: Yone (7:38) following a Kinniku Buster.

~ A signing ceremony took place for the upcoming GHC Heavyweight title match between Minoru Suzuki and Takashi Sugiura.
~ Both men remained silent throughout the duration. Though they did have a quick staredown before Suzuki left the ring.
~ Suzuki stated the rules that he wants to be enforced.
1. No time limit, (GHC title defenses are normally contested under 60 a min. rule), and there must be a winner by 3 count, KO, or submission. (Referee cannot call for a DQ.)

~ Akira Taue came out and officially announced that “Destiny 2015” will be taking place on December 23 at the Ota Ward General Gymnasium. This will be the final big show of 2015 which is also NOAH’s “15th Anniversary”.

(7) Shelton X Benjamin, Takashi Iizuka & Taichi vs. Naomichi Marufuji, Maybach Taniguchi & Katsuhiko Nakajima
◆Winner: Iizuka (15:46) following the Iron Finger From Hell on Maybach.
~ The ref was distracted and did not see the weapon used and made the cover when he saw both men were in that position.
~ Iizuka buried Maybach under chairs after the match, while Marufuji remained tied to the ropes with tape.

(8) Minoru Suzuki, Lance Archer & Davey Boy Smith Jr. vs. Takashi Sugiura, Raymond Rowe & Hanson [both ROH]
◆Winner: Hanson (25:43) following the Fallout (Belly-to-Back Suplex from Rowe and a Diving Guillotine Leg Drop from Hanson) on Archer.
~ War Machine claim the early win over K.E.S. heading into the GHC Tag challenge this coming weekend.
~ War Machine received a strong reaction from the fans in attendance.
~ Sugiura personally thanked War Machine for coming to Japan as he does not see a strong future for Suzuki-gun in NOAH. As Suzuki-gun looks to not have much in their favor heading into Osaka on 9/19.

(5) Shelton X Benjamin, Takashi Iizuka & Taichi vs. Naomichi Marufuji, Maybach Taniguchi & Katsuhiko Nakajima
◆Winner: Marufuji (14:10) following the Shiranui on Taichi.
~ Taichi tried to use the Jr. belt to get in a cheap shot, but the ref pulled the belt away and Marufuji capitalized on the opening.
~ Nakajima stated that he is a “monster hunter” and that he will “kill” Benjamin.

(7) Minoru Suzuki, El Desperado & TAKA Michinoku vs. Takashi Sugiura, Yoshinari Ogawa & Zack Sabre Jr.
◆Winner: Sugiura (20:10) following the Olympic Qualifying Slam on TAKA.
~ Sugiura noted that the NOAH committee has disapproved of the “no referee” ruling for the upcoming GHC title match, but he is adamant of that being the official ruling.

Full card updated for the upcoming Korakuen Hall show on 9/14 and then the big Osaka show on 9/19,