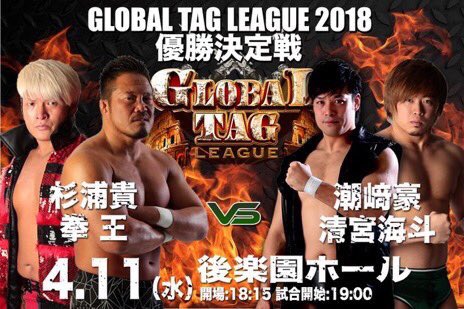 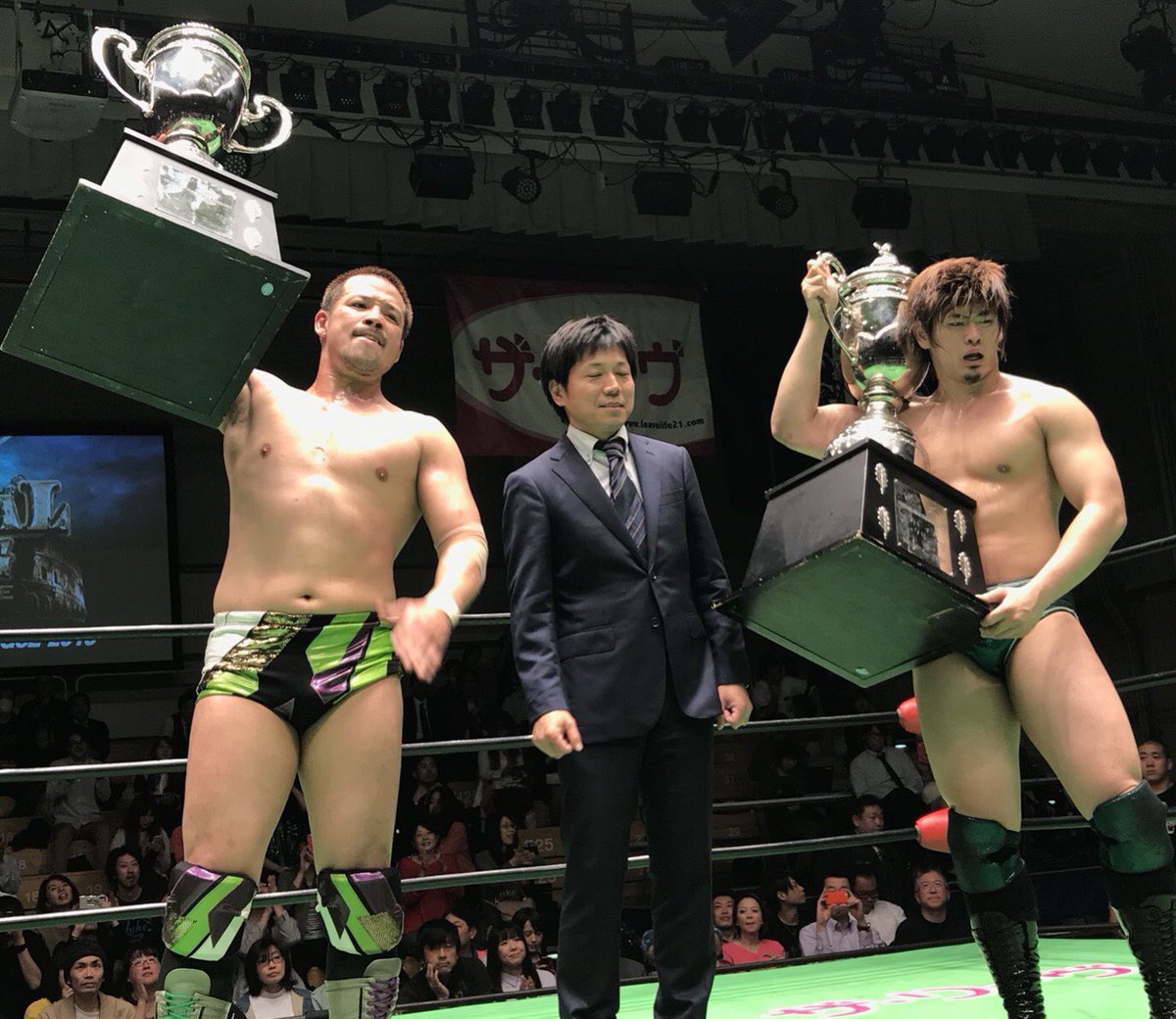 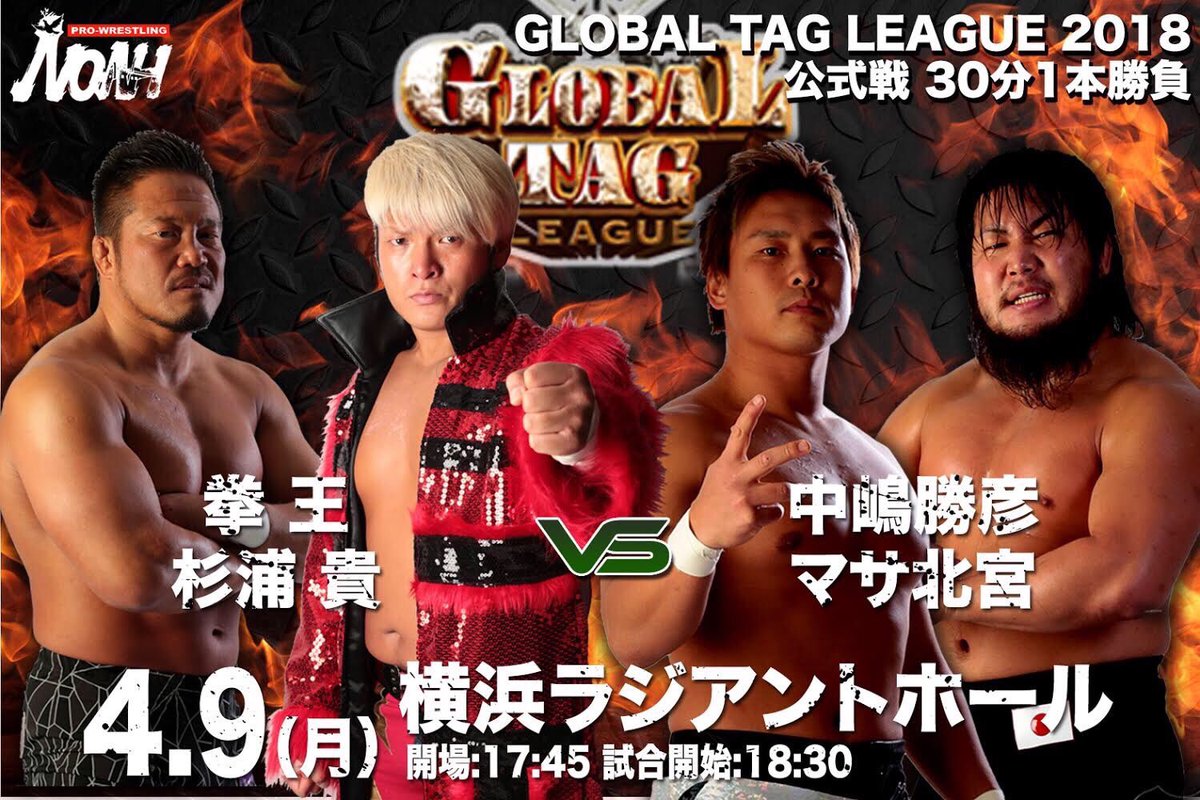 (1) Yoshinari Ogawa vs. Junta Miyawaki
◆Winner: Ogawa (5:54) following a Backdrop.
(2) Hajime Ohara & Hitoshi Kumano vs. HAYATA & YO-HEY
◆Winner: HAYATA (10:10) via pin-fall counter to an Argentine Bakcbreaker on Kumano.
(3) Daisuke Harada & Tadasuke vs. Hi69 & Minoru Tanaka
◆Winner: Harada (11:16) with a Modified Sunset Flip on Hi69.
~ Both RATEL’S teams claim the win in the prelude matches before the GHC Jr. Tag Tournament next week. As Harada stated that he wants to see all 4 of them facing off in the final.

The final day on April 11 will look as follows… 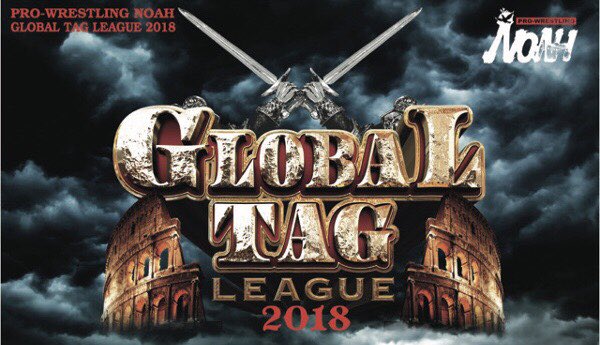 (1) Hitoshi Kumano vs. Junta Miyawaki
◆Winner: Kumano (7:50) with an Argentine Backbreaker.
(2) Yoshinari Ogawa vs. Hajime Ohara vs. HAYATA
◆Winner: Ohara (10:51) with the Muy Bien Clutch on Ogawa.
(3) Daisuke Harada & Tadasuke vs. Hi69 & Minoru Tanaka
◆Winner: Harada (17:23) with a Katayama German Suplex Hold on Hi69.
~ Harada with the win as he declared that this will be the same fate come the first round of next weeks GHC Jr. Tag tournament.
(4) Akitoshi Saito & Masao Inoue vs. Cody Hall & YO-HEY
◆Winner: Saito (10:14) following the Sickle Death on YO-HEY. 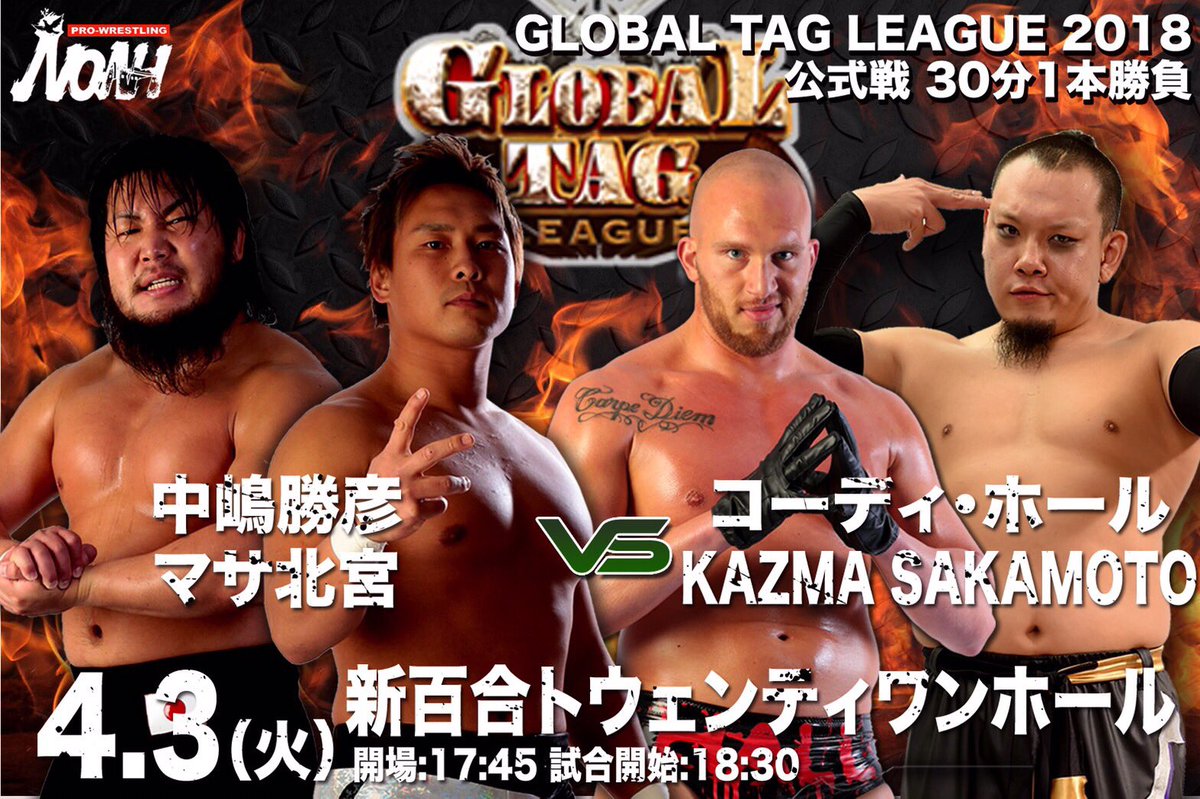 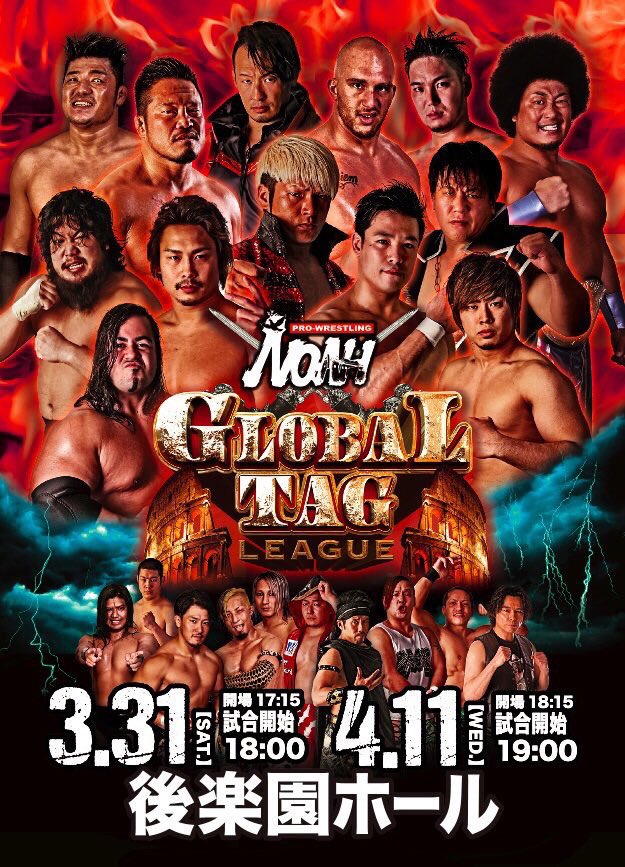 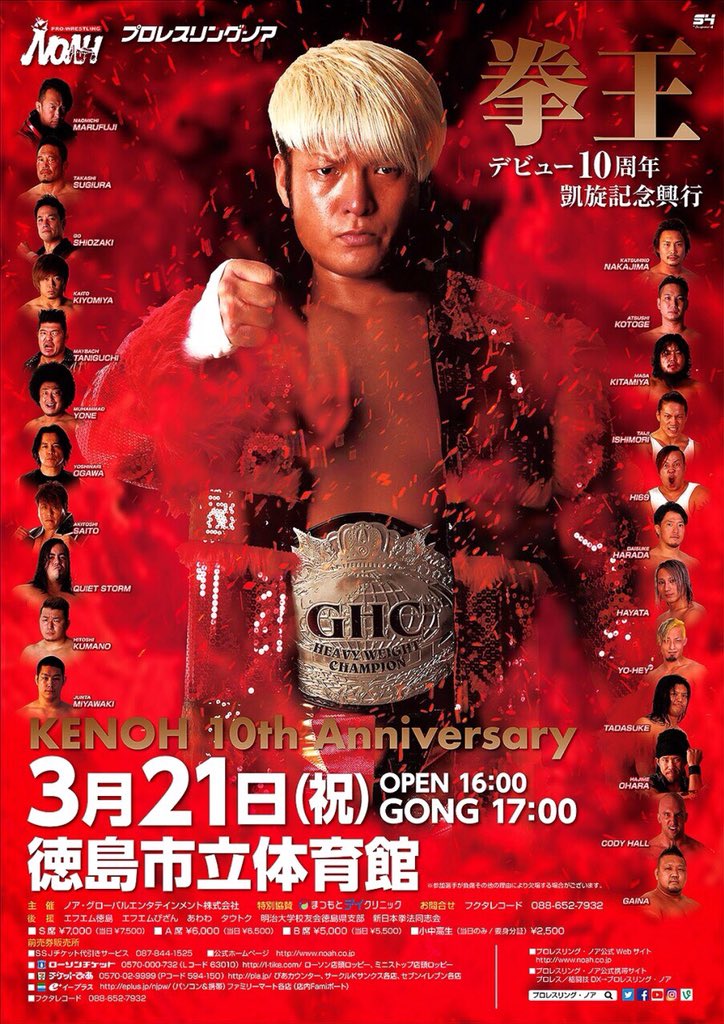 ~ Kaito Kiyomiya suffered a concussion at yesterday’s show and was withheld from competing today due to doctor’s orders. Taniguchi & Nagai will get an automatic bye in the league. The previously scheduled match was changed to a 3WAY.

(4) 3WAY Match: Go Shiozaki vs. Maybach Taniguchi vs. Mitsuya Nagai (DRADITION)
◆Winner: Taniguchi (12:56) with the Maybach Bomb Zwei on Shiozaki.
~ With the match change it worked completely in favor on Taniguchi and Nagai to get one over on Shiozaki. 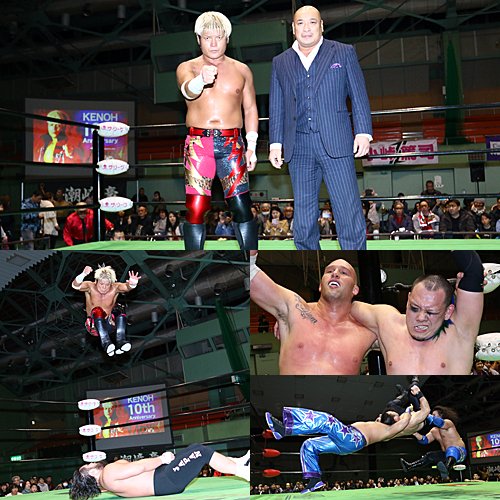 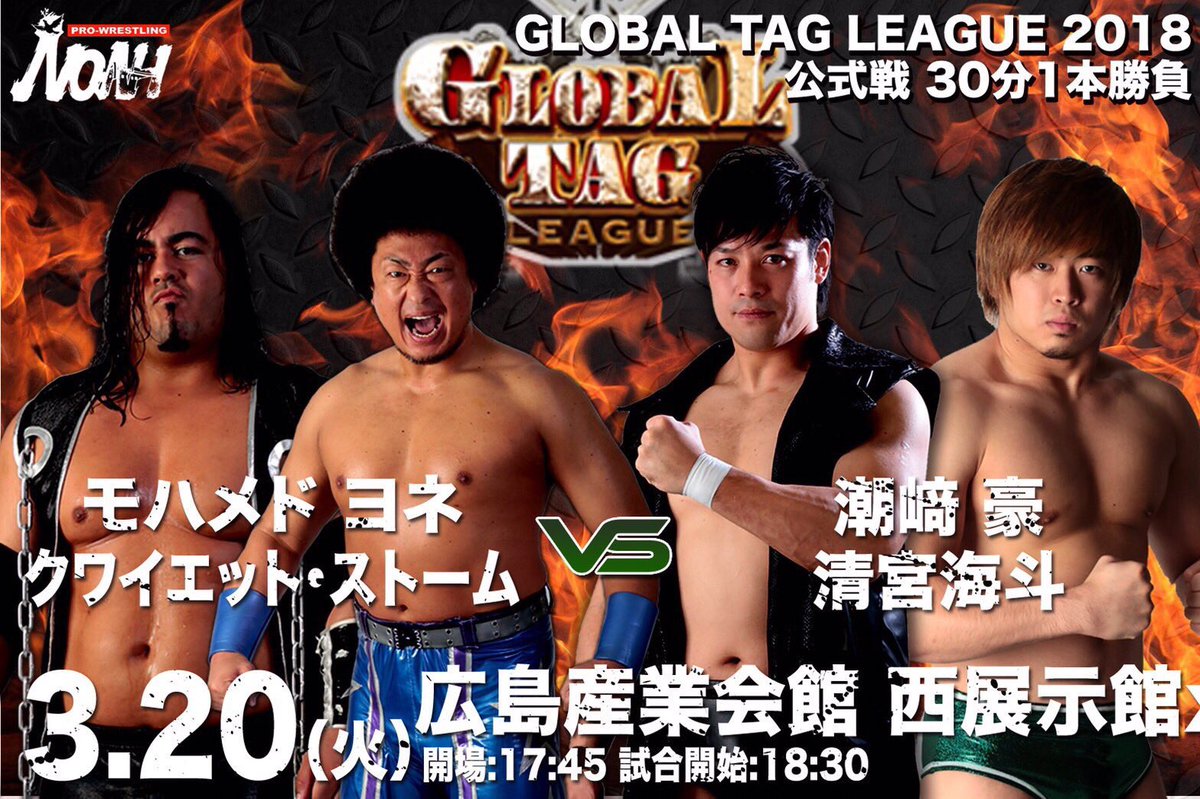 (1) Yoshinari Ogawa & Masao Inoue (FREE) vs. Tadasuke & Junta Miyawaki
◆Winner: Inoue (10:14) with an Argentine Backbreaker on Miyawaki.
(2) Hajime Ohara & Hitoshi Kumano vs. HAYATA & YO-HEY
◆Winner: Kumano (8:05) with an Argentine Backbreaker on YO-HEY.
~ Ohara and Kumano put their names forward as they seek to win the upcoming Jr. Tag Tournament and become the new champions in the process.
(3) Daisuke Harada vs. Hi69 vs. Minoru Tanaka
◆Winner: Hi69 (9:00) with a La Magistral on Minoru.
~ After the match, Minoru sought out a handshake with Hi69. Though Hi69 denied the request, but bowed before exiting the ring.
(4) Naomichi Marufuji & Atsushi Kotoge vs. Akitoshi Saito & Jay Bradley
◆Winner: Kotoge (11:42) with a Moonsault Press on Saito. 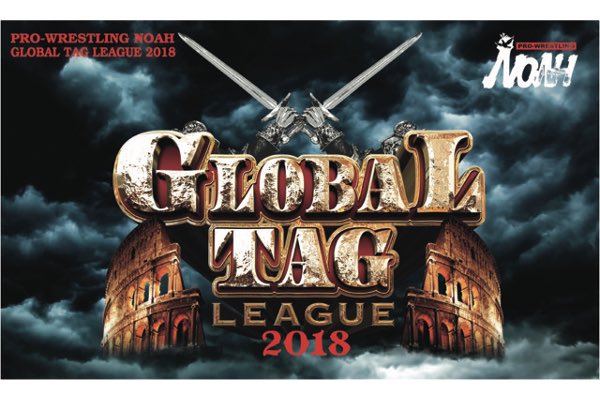 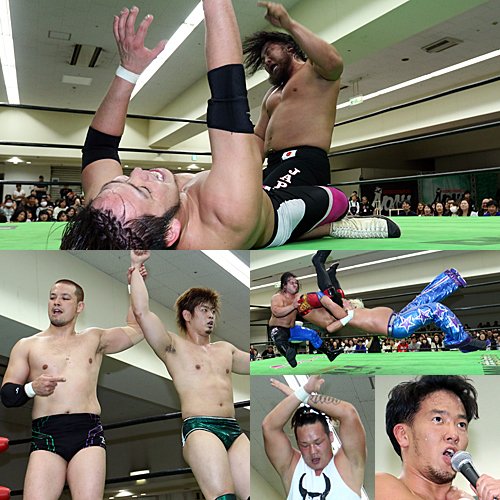 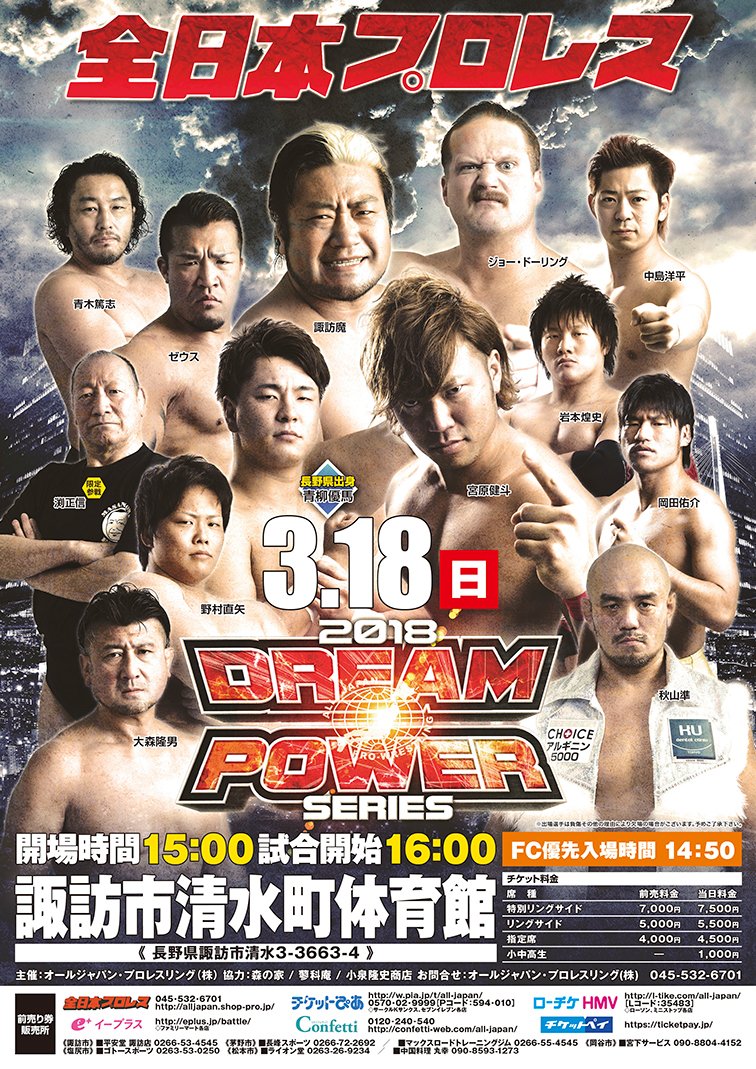 ~ The event cards were announced for the March 16 & 18 shows. Among the highlights are that Yusuke Okada will be taking on Black Tiger VII in a singles match before the special 6 man tag match in Saitama.

~ The full event card was announced for the March 3 show at the Seijo Hall.

~ The full event cards were announced for the Match 16, 17 & 18 shows, the later two of which will feature their title belts defended in the main events. 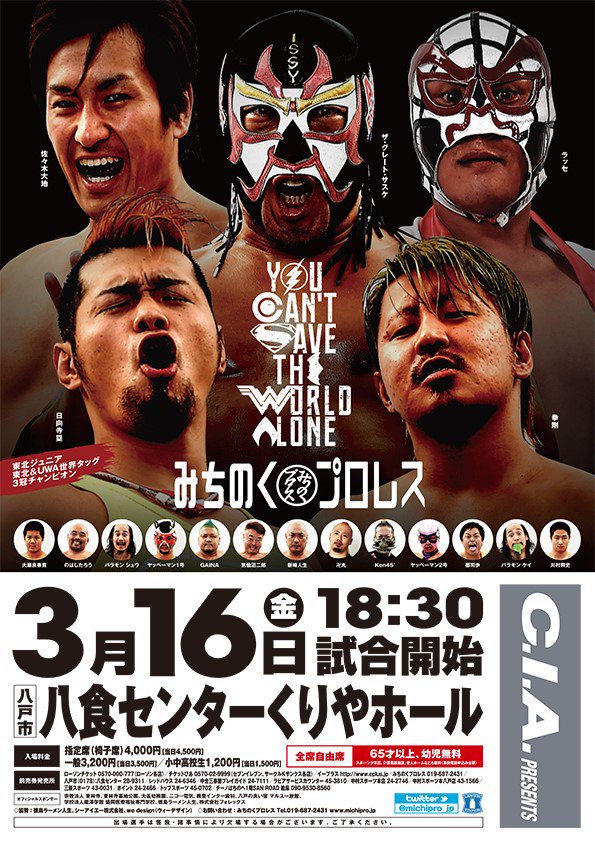 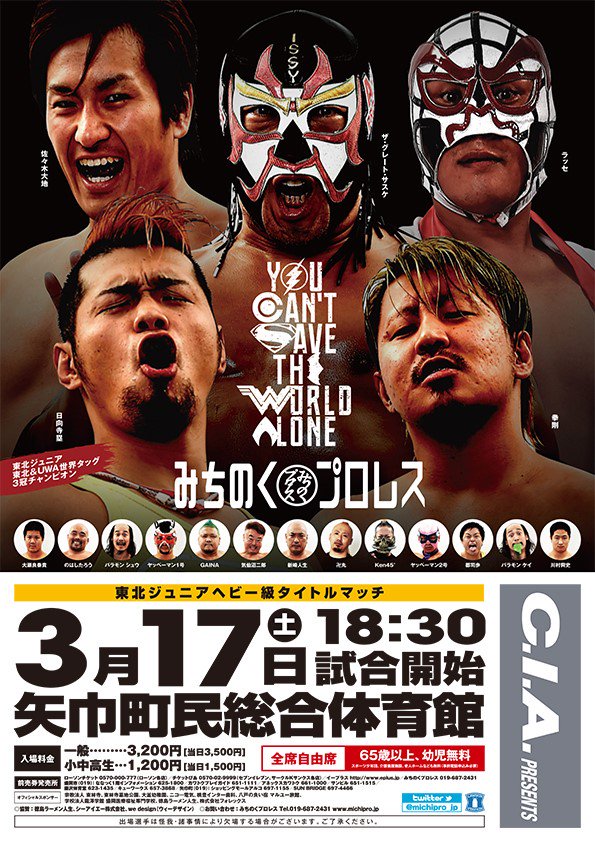 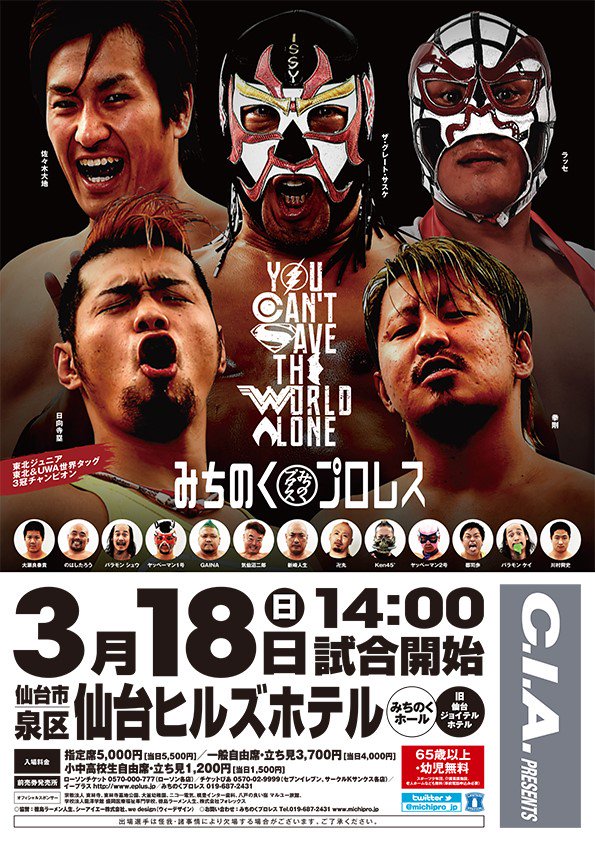 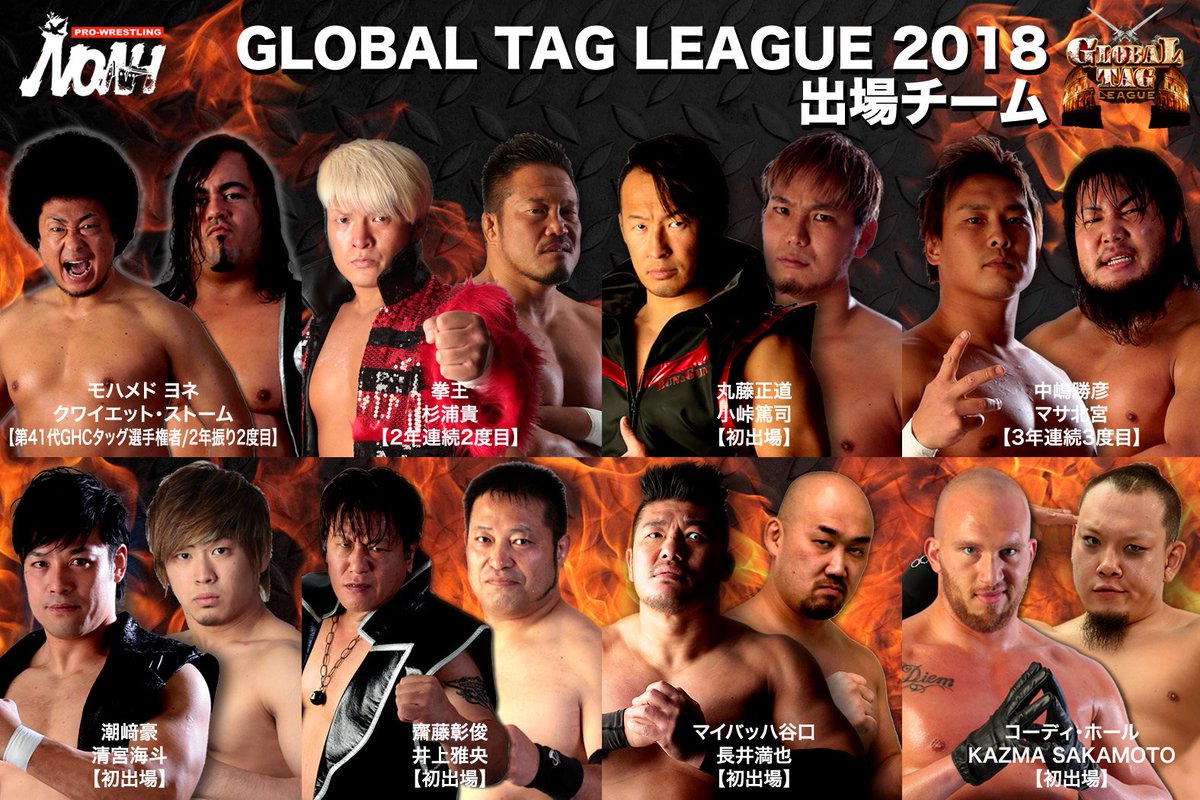 ~ The matches were announced for this years “GLOBAL TAG LEAGUE 2018”. This years league is set to begin on March 18 and will run until the final match which is set to take place on March 31 at the Korakuen Hall. The full event cards can be found on through the event card listings.

~ The First Tiger Mask announced that Dos Caras and Dos Caras Jr. (Guillermo Rodriguez) will be competing on the March 29 show at the Korakuen Hall. They will be taking part in a lucha libre rules 6 man tag match, 2/3 Fall – 45 mins). Then it was also announced that a “World Masked Championship Series” will be held in June and it will feature 12 wrestlers from all over the world. No further details were released at this time.

Keiji Mutoh announced that he will be undergoing knee surgery in March and because of that he will be hosting a special 8 man tag match on the March 14 show. Mutoh will be teaming with Ryota Hama, SUSHI & Kazushi Miyamoto to take on Masayuki Kono, Hiroshi Yamato, Yasufumi Nakanoue & KAI. Mutoh announced that he is bringing together several of his students from his All Japan era including those who have moved on to other promotions. The match will also see Hiroshi Yamato make his return after being out of action due to a neck injury in 2016.

As for his knee surgery, he mentioned that his daily life has been impacted more so as of late and he feels it is time to undergo extensive surgery on both of his knees. He mentioned that he may no longer be able to execute a Moonsault Press once he has an artificial joint put into place. So this match in March could every well be his last chance to execute one of his signature techniques. (Side note: Great Muta will be competing on the DDT show on 3/25.) As for when he thinks he will be able to to return he was not able to announce a time frame. He acknowledged that his strength has decreased as he has gotten older, but that he does plan to continue wrestling once he has undergone a successful rehabilitation. (1) Tadasuke vs. Seiya Morohashi (FREE)
♦Winner: Tadasuke (11:07) following the Outkast.
~ The former DDT wrestler thanked Ishimori for giving him the chance to compete in NOAH and would compete again if the chance arises.
(2) Taiji Ishimori & Hi69 vs. Yoshinari Ogawa & Rionne Fujiwara
♦Winner: Ishimori (8:20) with a 450° Splash on Rionne.
(3) Hajime Ohara & Hitoshi Kumano vs. Daisuke Harada & HAYATA
♦Winner: HAYATA (14:13) following the Headache on Ohara.
~ HAYATA with a direct win over the GHC Jr. Champion before their match on 5/27. 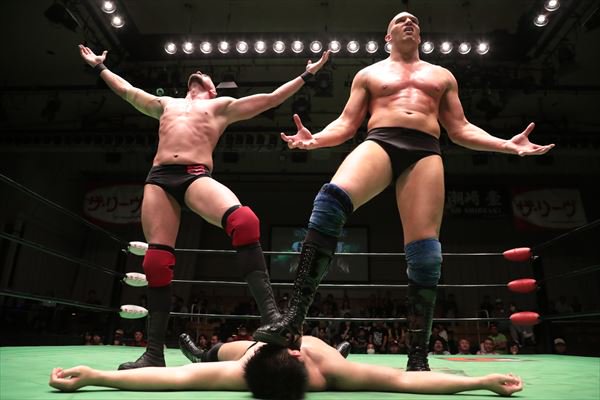 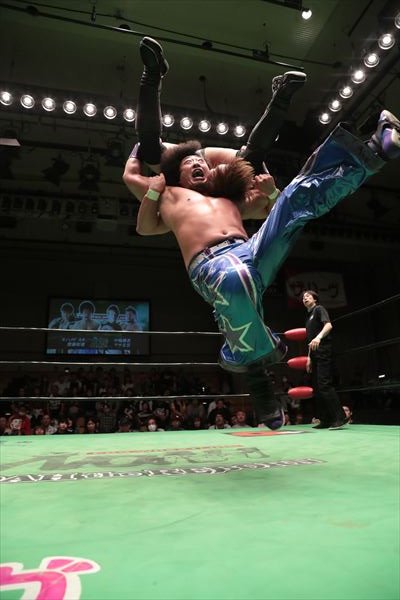 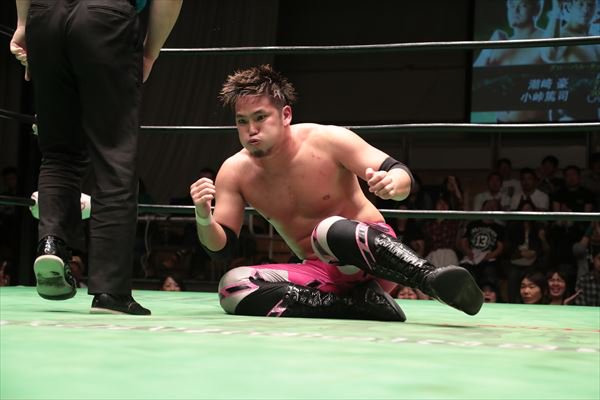 ~ The final match is now set as the GHC Champions Naomichi Marufuji and Maybach Taniguchi take on Go Shiozaki and Atsushi Kotoge.

(1) Hitoshi Kumano vs. Rionne Fujiwara
♦Winner: Kumano (8:45) with the SH (Modified Crossface).
(2) Hajime Ohara & Yoshinari Ogawa vs. HAYATA & YO-HEY
♦Winner: Ohara (9:45) with the Muy Bien on YO-HEY.
~ HAYATA took out Ohara after the match as he asserted himself over the champion.
(3) Taiji Ishimori & Hi69 vs. Daisuke Harada & Tadasuke
♦Winner: Ishimori (11:56) with a 450° Splash on Tadasuke.
~ XX bounce back with a win as they GHC Jr. Champions aim to prove why they are the champions.

(4) GTL Match: Naomichi Marufuji & Maybach Taniguchi vs. Kaito Kiyomiya & Takuya Nomura
♦Winner: Taniguchi (13:06) with the Maybach Bomb Zwei on Takuya.
~ Marufuji gave a high praise to the young Takuya as he even stated that he wouldn’t mind taking him on in a singles match down the road. A true test of his skill.
~ Marufuji/Taniguchi [4 wins, 1 loss = 8 points]
~ Kiyomiya/Takuya [1 win, 4 losses = 2 points]