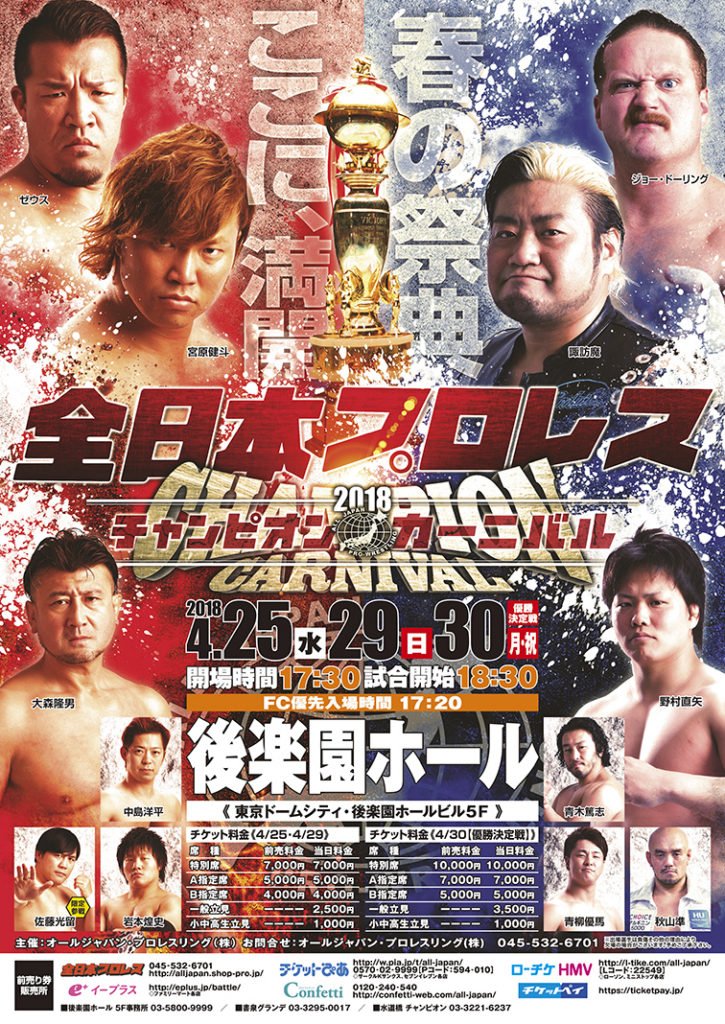 ~ Jun Akiyama, Takao Omori, Masanobu Fuchi, and Kyohei Wada came out to the ring for an honoring ceremony for Bruno Sammartino and Motoko Baba who both passed away this month.

~ Jake Lee appeared and announced that he left out a key part of return announcement at the Saitama Super Arena. That he wishes to face Kento Miyahara, Naoya Nomura, and Yuma Aoyagi in the future and thus he made it official of his withdrawal from NEXTREAM. Lee’s return match will be on May 24 at the Korakuen Hall.

~ With the B BLOCK now decided, the next show on April 29 will determine the winner of the A BLOCK.

It was announced publicly that Motoko Baba, wife of Giant Baba and former president of All Japan Pro-Wrestling, had passed away on April 14 at the age of 78 due to cirrhosis of the liver.

Following Baba’s death in 1999, she assumed control of All Japan Pro-Wrestling the following years until Keiji Mutoh took control in 2002. She would remain as a counselor and also in a supporting role until 2014 when Jun Akiyama assumed control of the current regime of All Japan. Though while Baba was in the early stages of building All Japan she was considered a mother figure to many of the wrestlers. She contributed a lot behind the scenes and where she garnered the nickname of the “empress of the pro-wrestling world”. With Baba’s drive to offer his style of pro-wrestling and Motoko’s supporting role as a manager under him they both managed to build up All Japan to a leading role throughout 1970’s to the 1990’s.

A farewell ceremony was held strictly for her family on the April 19 & 20 and news of her initial passing was withheld by the request of her family.

It is a sad day as another icon of the “Showa era of Japanese Pro-Wrestling” has moved on from this world. Though hopefully she has found peace once more alongside her late husband.

Akiyama stated that his plan is to “convey the teachings of the late Giant Baba for a new generation”. He also aims to make sure that everyone in the promotion can continue to work hard and give hope back to the fans. Akiyama also announced that Suwama has been appointed as the new Senior Managing Director as well as Motoko Baba, the late Giant Baba’s wife, will be joining the promotion once more as the senior advising director.

Akiyama stated that in June it was announced that he would be taking over as the president of the promotion and that a new company would be coming as of July 1st. All of the current wrestlers and most of the staff would be joining as well. The new company was officially registered as of July 1st and Akiyama was glad to present the new promotion to everyone today.

Akiyama, Suwama, Omori, Akebono, Go Shiozaki, KENSO (who was absent from the conference), Naoya Nomura, Kento Miyahara, Kotaro Suzuki, Yoshinobu Kanemaru, Masanobu Fuchi, Atsushi Aoki, and SUSHI will all be a part of the new endeavor.

Akiyama mentioned that after extensive discussions with Nobuo Shiriashi, the owner of the previous All Japan Pro-Wrestling, who owns all the trademarks associated with the previous promotion as well as conflicts within the new. That an agreement has been made as of July 3rd for the new promotion to continue forward as of the past. What this means is that all the championship belts, series/tour names, as well as the future company name are allowed to be used. The new All Japan will work no differently from the All Japan of the past 40+ years.

Akiyama stated that today’s press conference is held today at Capitol Hotel Tokyu a place that Baba himself had much appreciation for. Akiyama said that there was no better place to hold this press conference and to publicly state the establishment of the new promotion as Baba once did himself many years ago. Almost as if it was destiny for this to happen.

Akiyama stated that at one time All Japan used to be one of the premiere promotions in Japan and his goal is to work hard to achieve that position once more. He said he has determination and confidence in the employees and wrestlers for many strong and positive changes to occur.

Suwama stated that his stance on “protecting All Japan” has not changed since the major turmoil occurred last year at this time. That he is still here and that he will be trying to alleviate as much burden from Akiyama’s shoulders as possible. His goal is to “restore confidence and trust” to the fans and to serve the promotion to the best of his ability.

The conference then closed out with Suwama, Motoko Baba, and Akiyama shaking hands to signify the official start of this new beginnings of All Japan Pro-Wrestling.

Update / Notes…
Motoko Baba is indeed the head sponsor of the new All Japan, without her there would have be no way for Akiyama and others to be able to re-start.
Kazufumi Yoshimura is a close friend of Motoko’s so this is how the connection was formed. Though it is already off to a decent start as she did not take the power position and offered it to Yoshimura.

From what I have also gathered, Akiyama wanted to do the conference sooner, but Shiraishi was not budging on his ownership of trademark’s. Which he still owns from what I can gather. Akiyama and Motoko had to come to some kind of deal I believe.
Which this agreement just transpired on the 3rd, which I mentioned in the main post as well.
Akiyama wants everything to be worked out as peacefully as possible. Not like what Shiraishi was trying to do when Mutoh and his crew all left. Threatening to sue them for breaching contracts and such.
The July 12th show will be “live” on SAMURAI TV from what I can gather.
There are problems between GAORA and Shiraishi that had to do with the trademarks. GAORA are still in negotiations for what happens in the future. I still do not think any shows from July and August are scheduled to air on the channel, but that can change at anytime.
– BushidoRX – facebook.com/groups/PuroresuSpirit/