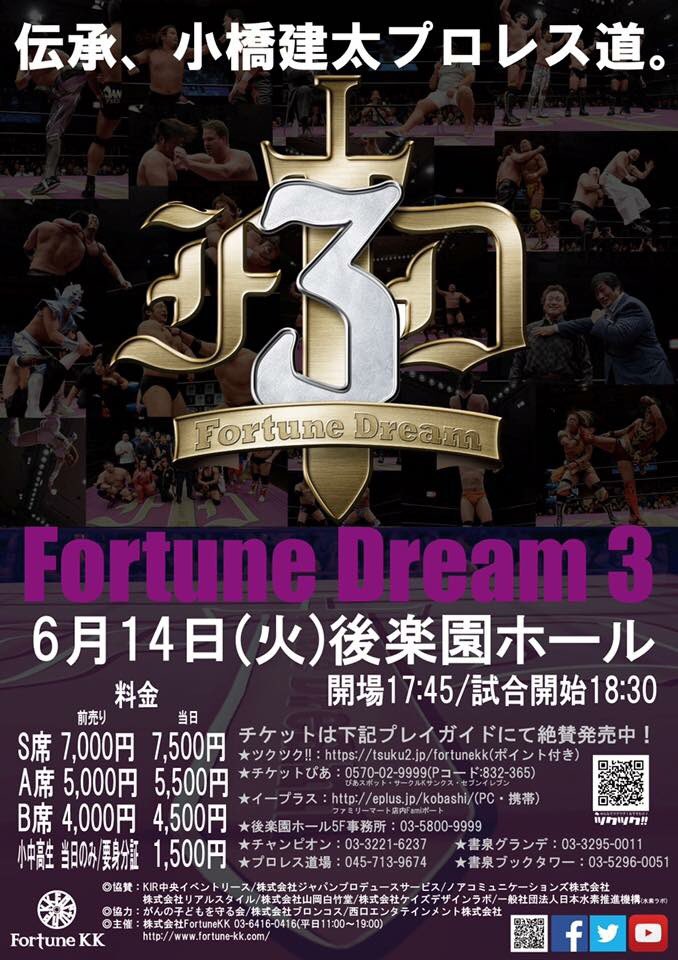 (4) Fortune Dream 3 Special Talk Battle: Kenta Kobashi “vs” Kensuke Sasaki
◆Winner: – (30:00)
~ Both discussed their legendary chop match that took place eleven years ago and even their nickname for each other, “Ken-chan”.
~ Kensuke also addressed his wife’s, Akira Hokuto, on-going recovery from breast cancer. That they are struggling financially, but hope to get through it.

(6) Fortune Dream: Go Shiozaki [NOAH] & Yuji Okabayashi [BJW] vs Daisuke Sekimoto [BJW] & Yuji Hino [FREE]
◆Winner: DRAW (30:00) Time Expired.
~ Hino called out for the match to continue, Kobashi agreed as he gave the match 5 more minutes.
◆Winner: Okabayashi (2:19) following a Lariat on Sekimoto.
~ Kobashi thanked everyone for competing today especially those in the main event. All the wrestlers came out to the ring after the match for a closing photo session.
~ Kobashi ended the show with an honoring to Mitsuharu Misawa as “Spartan X” began to play throughout the hall.

END_OF_DOCUMENT_TOKEN_TO_BE_REPLACED

[Misc. News] Today, February 3, marked the Setsubun Festival, bean-throwing festival, with many wrestlers coming together at the Ikegami Honmo-ji (temple). This being the final resting place for the father of Japanese Pro-Wrestling Rikidozan.

The event is always known for the photo oppurtunities as it brings together many of the promotions that otherwise rarely see mixed together. A notable photograph saw Marufuji, Mutoh, Tanahashi, and Makabe also standing next to each other as they are the reigning single champions in their respected promotion.

A retirement party was held in Kensuke Sasaki honor in Tokyo, Japan today as a final send-off to celebrate his 28 years in as a professional wrestler.

Roughly 400 people came out for the occasion including many other wrestlers, most notably with Antonio Inoki (left picture) and Kenta Kobashi (right picture). Two people who were very influential to him throughout his career, as well as close friends.

A 10 count gong was conducted to officially signal the end of his career. Sasaki was in tears as he finally closed this chapter of his life.

Sasaki made a joke during the party that he still trains and eats like he was still competing, but he knew the time was right for him to make the decision to officially retire.

Sasaki’s last match was against his protege Katsuhiko Nakajima on February 11th of this year.

[NOAH News] A press conference was held to officially welcome Mitsuhiro Kitamiya as the latest member of Pro Wrestling NOAH.

The former DIAMOND RING/Kensuke Office Rookie formally announced that he would be heading to the promotion in early March with a final match in DIAMOND RING against Katsuhiko Nakajima.

The President, Akira Taue, and Vice-President, Naomichi Marufuji, were on hand to be apart of Kitamiya’s next big step in his career. Marufuji stated that he has very high expectations for Kitamiya and hopes that he will do his best going forward.

Kitamiya thanked Taue and Marufuji for being present and said he is looking forward to his future in Pro Wrestling Noah. Kitamiya mentioned that he will continue to utilize what he learned from Kensuke Sasaki and continue to work as hard as possible in this new venture. He then thanked the fans for their continued support.

During the press conference Kitamiya was asked if he would be aiming for the heavyweight division?
Kitamiya replied that he is not 100kg yet, but that he does indeed aim to be a heavyweight one day and will work in increase his body size.

Mitsuhiro Kitamiya (北宮光洋)
172cm tall and weighs in at 95kg.
Born October 27, 1988 and hails from Toyama Prefecture, Tonami City, Japan.
He debuted on September 25, 2011 against Satoshi Kajiwara at the Toyama Techno Hall.
Currently his signature moves are a Spear and Dropkick.

To get straight to the point, following the upcoming show on March 9, DR will going under a hiatus for the time being.

It was then announced Mitsuhiro Kitamiya will be officially transferred to Pro Wrestling Noah as of April 1.

Satoshi Kajiwara officially became a freelance wrestler as of the February 11th show, as he maintains a high profile job outside of pro-wrestling.

Katsuhiko Nakajima then announced that he will remain solely under the DIAMOND RING banner. He stated that he will make it his goal to protect the banner of the promotion and aims to see DR continue once more in the future. (Maybe pointing to if, and when, Sasaki’s eldest son debuts in the next couple years.)

Akira Hokuto, Sasaki’s wife and DR’s representative, announced that Katsuhiko Nakajima will be taking on Kitamiya in a special singles match on the 3/9 Kensuke Office Dojo show.

Kitamiya stated that he will be aiming to use all his strength and heart against Nakajima to honor this big change that is coming.

Only fitting for Sasaki’s first protoge to take on his last under the current DR banner. Kensuke Office got its start in February of 2007 and DR has been running since February of 2012. It’s an end of an era for now, but with DR not “closing” this leaves the potential for a new beginning in the future. – CP/BushidoRX

Kensuke Sasaki [47] formally announced his retirement today as he celebrates his 28th year as a professional wrestler.

Following the match against his protege Katsuhiko Nakajima on the 2/11 DIAMOND RING at the Korakuen Hall.
http://keepingthespiritalive.tumblr.com/post/76300841999/diamond-ring-kensuke-sasaki-vs-katsuhiko-nakajima

Sasaki made an unclear statement towards his retirement as he said that he now had no regrets in his career, and then walked out of the arena. Many people did not know what to think if Sasaki had just announced his retirement, or not.

Sasaki stated that he has been plagued with injuries over the last couple of years. The last major being a herniated cervical disc that put him out of action for most of 2012. He said that he is still suffering from the effects of this injury and for his future with his sons he cannot go through anything more severe.

Sasaki’s wife Akira Hokuto stood by his side for the announcement and showed her appreciation for the big decision that he had to make. He stated that he now wants to live his life to his heart’s content, and even mentioned that he wants to try snowboarding.

~ Nakajima came out at the start of the show to thank everyone for coming out and to help him celebrate his 10th anniversary. Nakajima stated that he expects a rough match against his “father” and he wanted to be sure he could greet the fans properly. He closed it by asking everyone to please enjoy the event today.

(3) Kento Miyahra [AJPW] vs. Go Shiozaki [AJPW]
◆Winner: Shiozaki (10:50) following the Go Flasher.
~ Respect was shown between the All Japan Xceed teammates. The two both move on to compete again in All Japan later today.
~ Miyahara stated that it is his goal to claim the World Tag belts with Shiozaki as his partner.

(5) Satoshi Kajiwara & Fujita “Jr” Hayato [Michinoku] vs. Naomichi Marufuji & Taiji Ishimori [both NOAH]
◆Winner: Marufuji (18:20) following the Tiger Flowsion on Kajiwara.
~ It seems there might be something more heading out of this match between Ishimori and Hayato… I guess only time will tell if a single match comes into play between the two.
~ Marufuji went to shake Hayato’s hand, but Hayato kicked it away.

(6) Main Event: Kensuke Sasaki vs. Katsuhiko Nakajima
◆Winner: Nakajima (20+) with a German Suplex Hold.
~ Nakajima finally claimed a victory over his teacher. The torch has been passed from teacher to student, or this case “father to son”, Nakajima claims the biggest win over his career on his 10th year milestone.
~ Nakajima thanked Sasaki for the match afterwords. Sasaki replied that Nakajima has certainly become a strong wrestler, and that even though he lost it feels right to have lost.
~ The 47 year old Sasaki, who is celebrating his 28th year as a pro wrestler, said that he has no regrets.

It really just felt like Sasaki expressed that he will be retiring from active competition!? The details are scarce at this time as Sasaki just kind of announced this abrubtly and then walked out of the arena. Was this his final match? Or will be plan on holding a final show sometime in the near future. I’ll be sure to keep you guys updated to what happens. – BushidoRX

With their upcoming singles match tomorrow, I felt that it is only fitting to share this match today. The “father and son” will once again face off in singles action, but this time in honor of Nakajima’s 10th anniversary as a professional wrestler.

This match listed today would mark the very first time that Sasaki and Nakajima would ever face off against one another in a singles match. Nakajima was barely 3 years into his professional career at this point in time and had been labeled as a potential future star of the sport. Nakajima would prove to hold himself better than expected against his teacher, and it now comes around full circle for their meeting yet again this year.

Nakajima stated that he is finally looking to overcome the wall that has been in front of him and to take the ultimate next step in his career. That it is also an honor that Sasaki has accepted this upcoming match for his 10th anniversary, as there is no other person that he could face at this time. Than the man that he has seen as a his father figure for the entirety of his career.

Following the previously announced main event between Kensuke Sasaki and Katsuhiko Nakajima, DR has announced 5 other matches to fill out the annual Korakuen Hall show on 2/11. Among the announcements is what should be a sold semi-final match as Satoshi Kajiwara teams with Michinoku Pro Wrestling’s Fujita “Jr” Hayato to take on the Pro Wrestling NOAH team of Naomichi Marufuji & Taiji Ishimori. All 4 men are skilled junior heavyweights in their own right and this should be a fast paced and technical match from the early looks of things.

Kento Miyahara, though now freelance from DR, will also be undergoing a special singles challenge match of his own, but at this time no challenger has been named.

The two rookies from DR & NOAH will be teaming together to take on the current “super” rookies from both Pro Wrestling ZERO1 & KAIENTA DOJO.

Below is the announced card in full.

[DIAMOND RING News] It has been made official that Katsuhiko Nakajima [25] will face his mentor Kensuke Sasaki [47] in a singles match on DIAMOND RING’s anniversary show on February 11, 2014 at the Korakuen Hall.

Nakajima asked for this match to happen back on DR’s show on August 31, and in a little less than 3 months it has been made official.

2014 will be a milestone year for Nakajima as it marks his official 10th year as a professional wrestler, and Kensuke wants to see for himself just how strong and how far Nakajima has come along over the years.

Nakajima stated that he is finally looking to overcome the wall in front of himself and that it is a huge honor that Sasaki has accepted this match for this 10th anniversary. There is no other person that Nakajima says that he could really face than the man that he has seen as a his father figure for his whole career.

~ The next DR show will be on November 24 at the Kensuke Office Dojo.

~ Full card for their next show was announced.