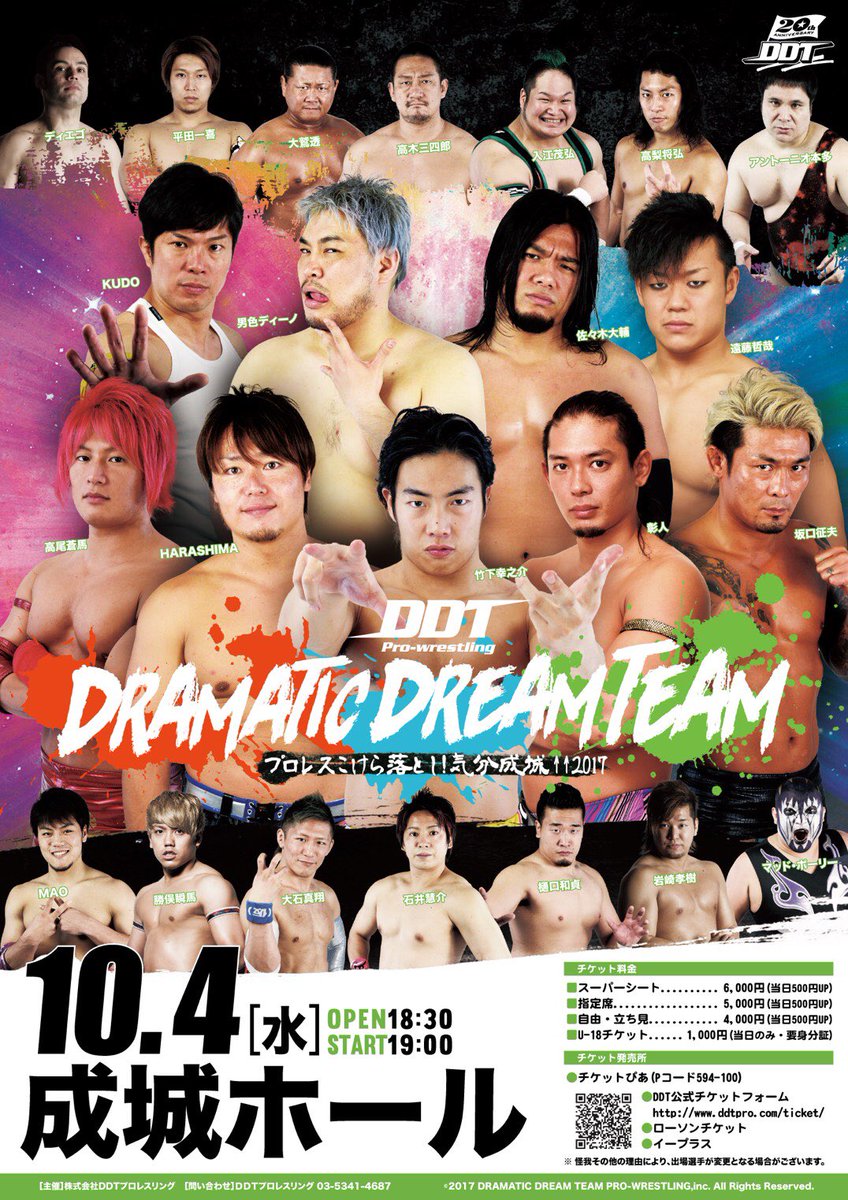 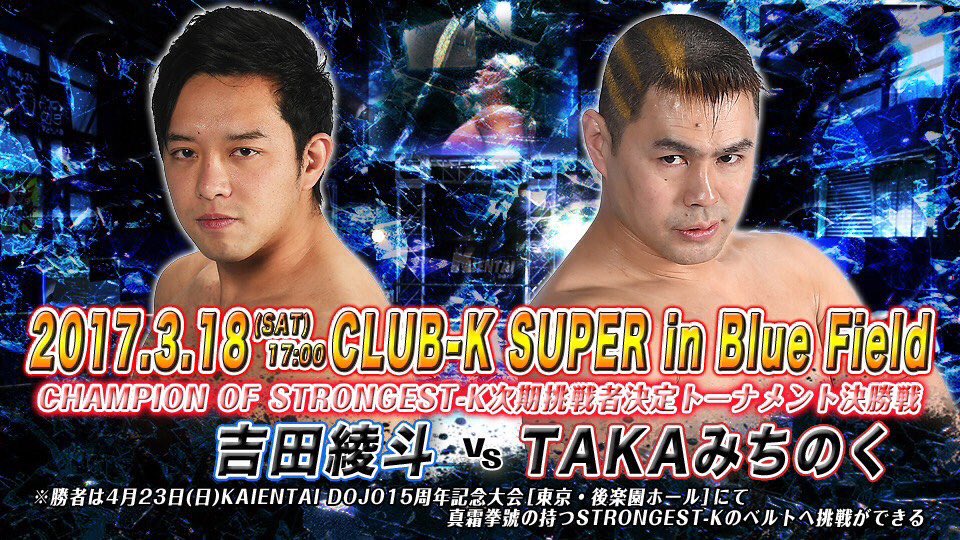 (6) CHAMPION OF ST-K Next Challenger Decision Tournament Final: (Winner of 3/5) TAKA Michinoku vs. (Winner of 3/12) Ayato Yoshida
◆Winner: Yoshida (19:52) with the Yoshida-gatame (modified chicken wing).
~ Yoshida goes on challenge Mashimo for the CHAMPION OF ST-K belt on April 23.
~ Yoshida stated that today he overcame TAKA, but next he aims to begin the true new era by defeating Mashimo at the Korakuen Hall. 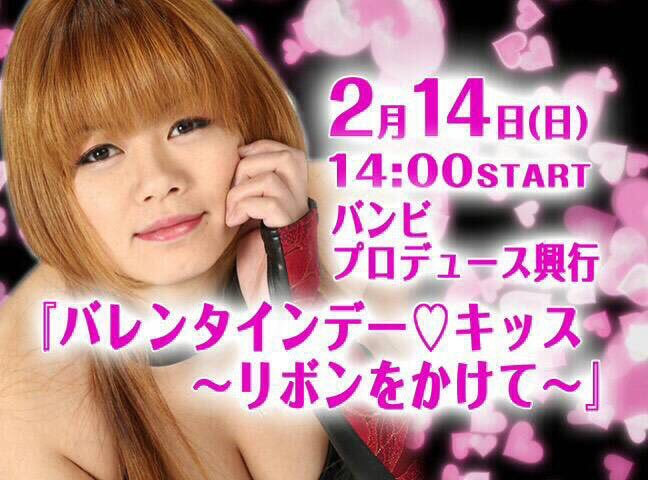 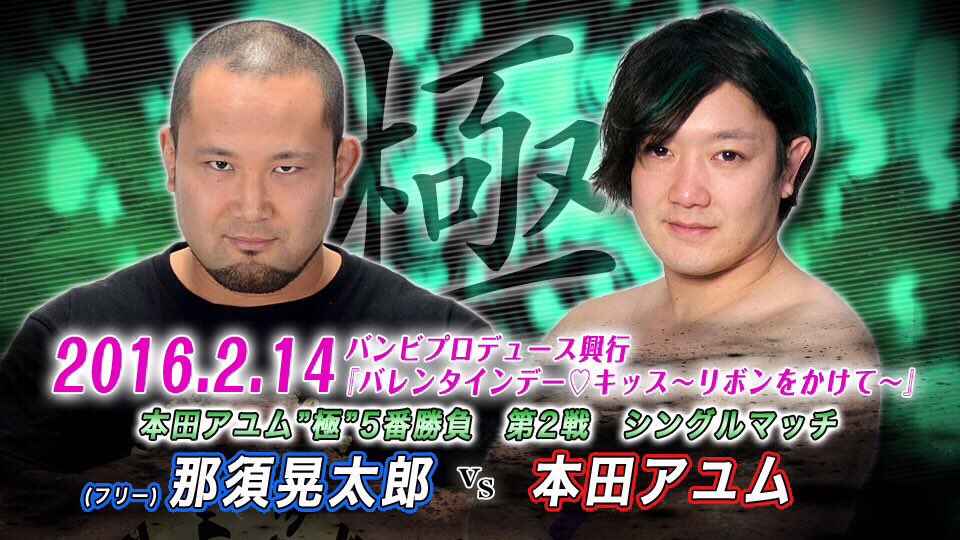 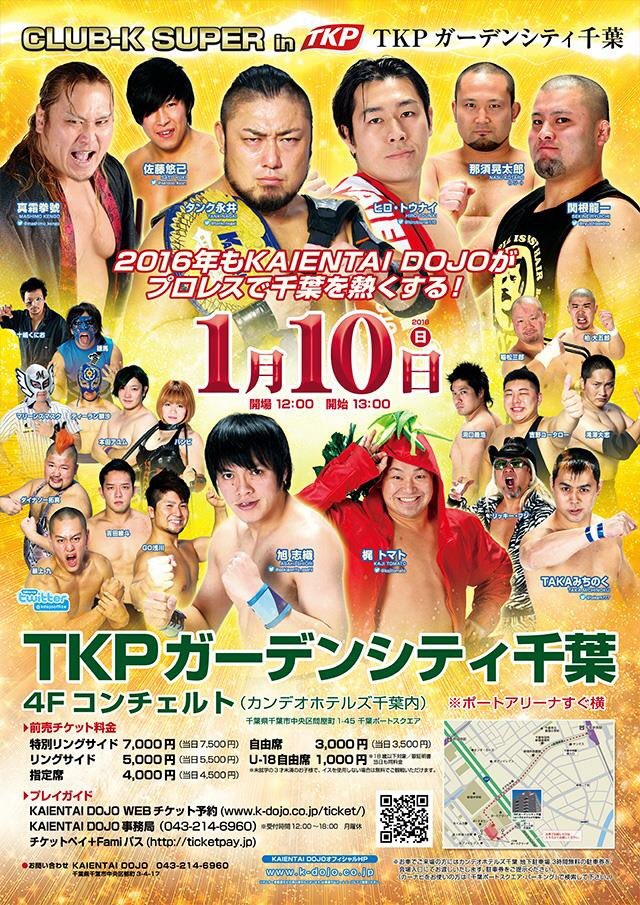 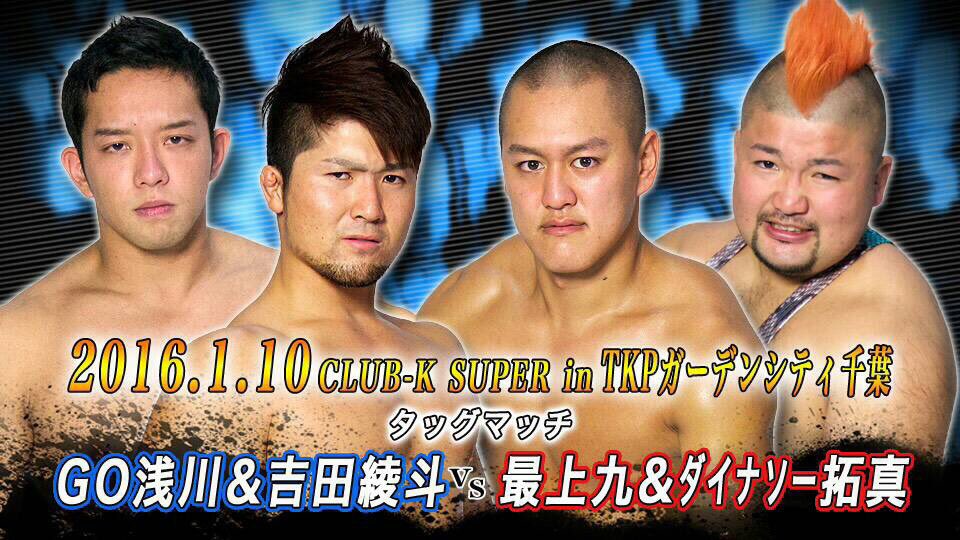 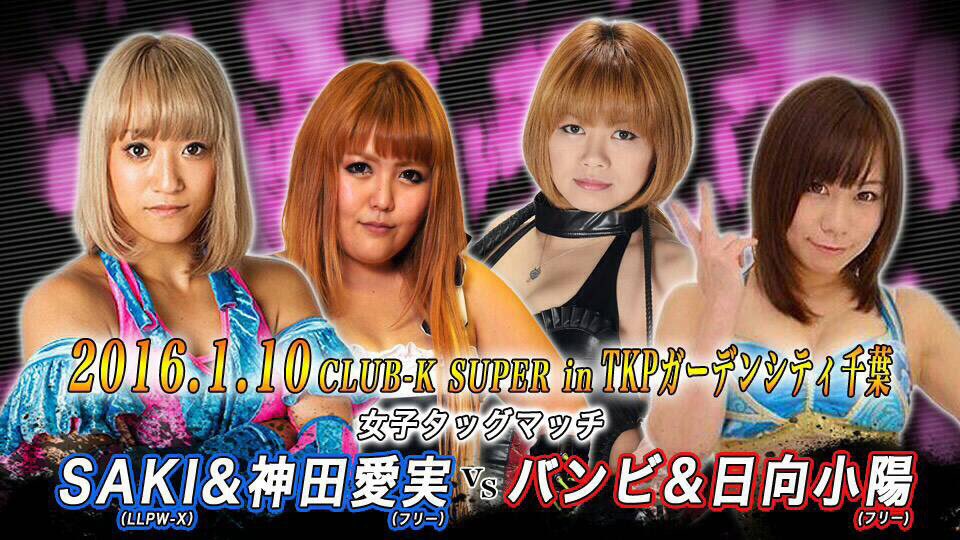 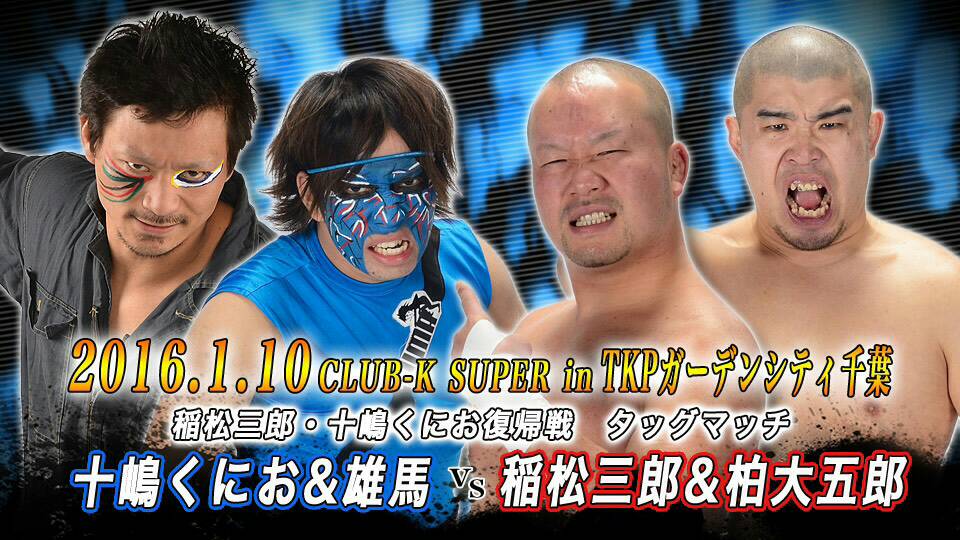 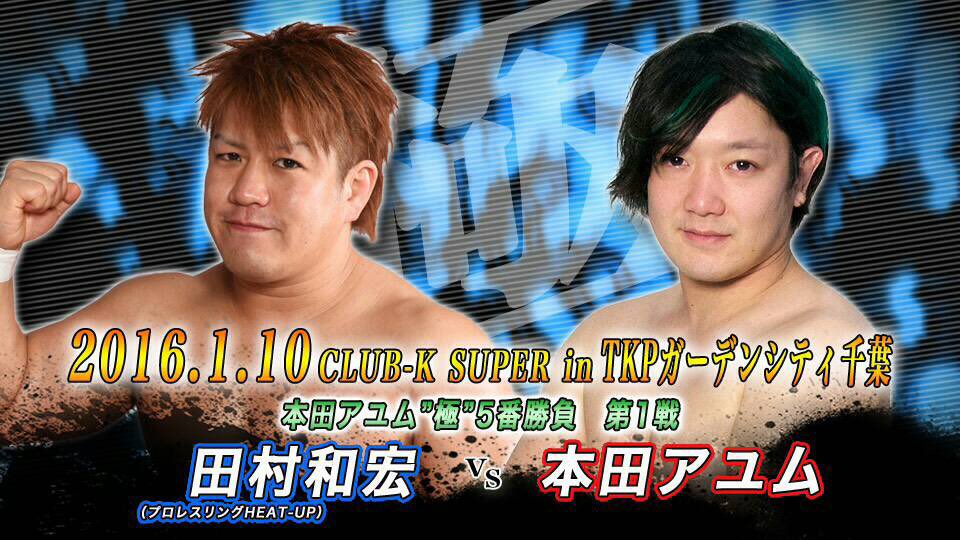 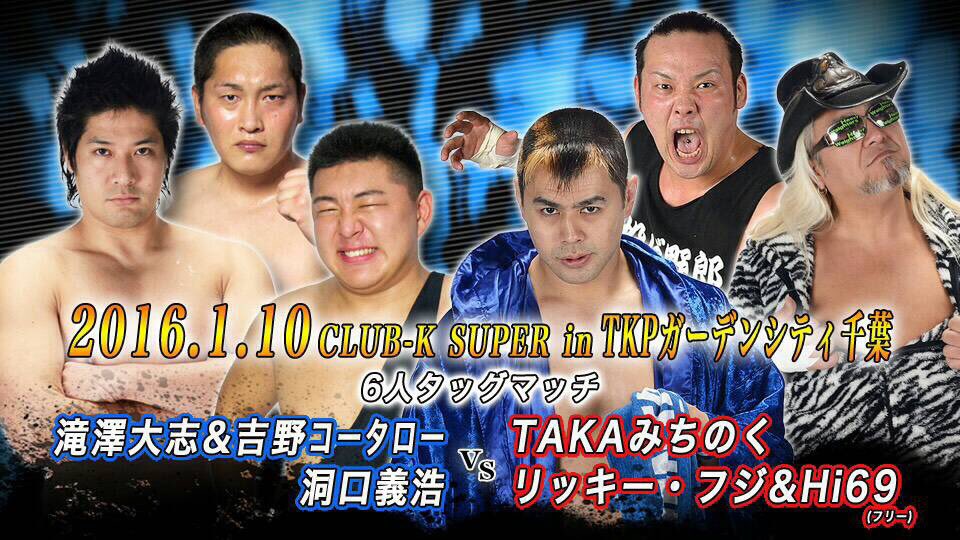 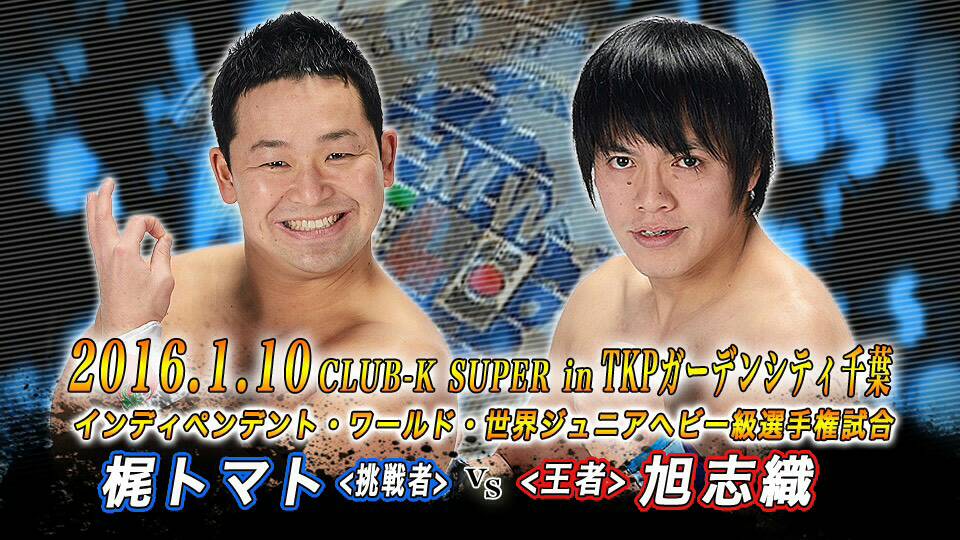 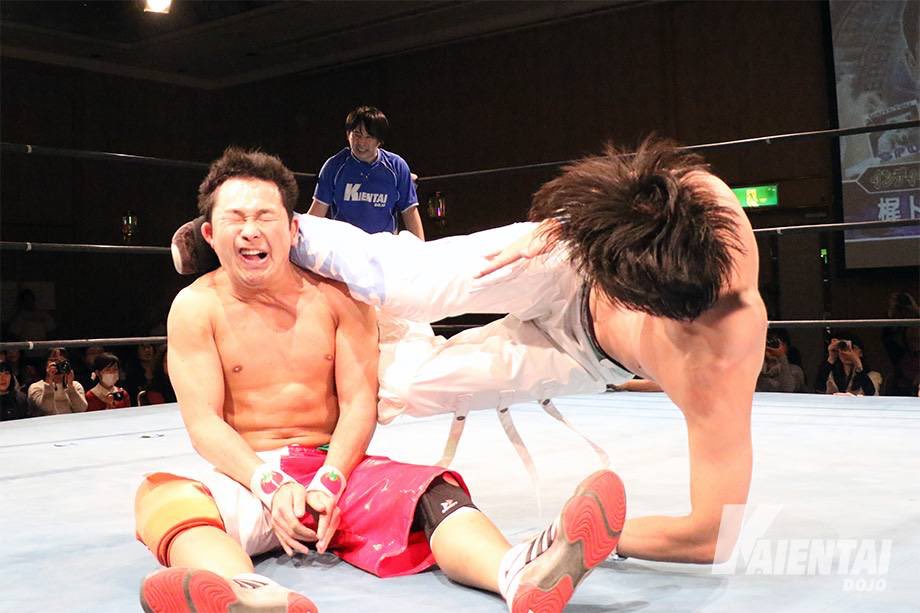 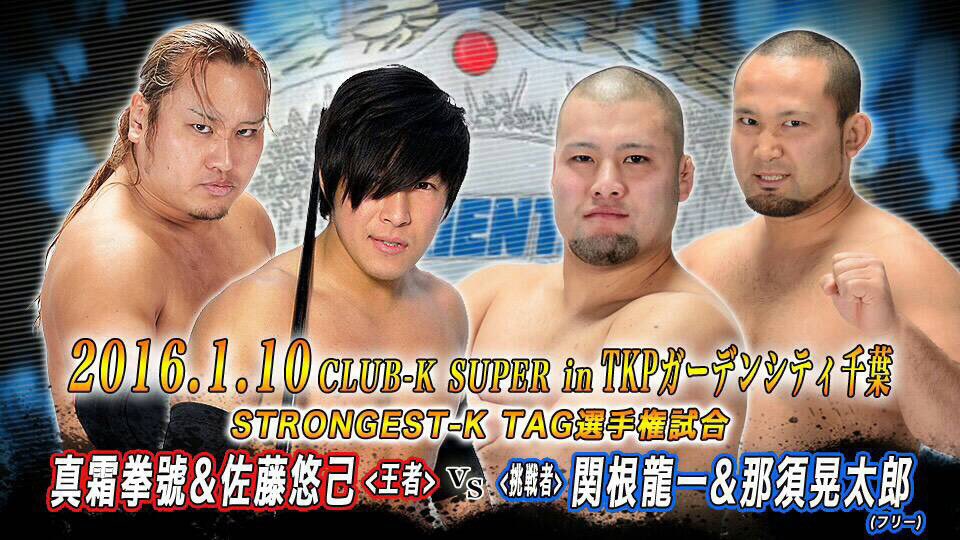 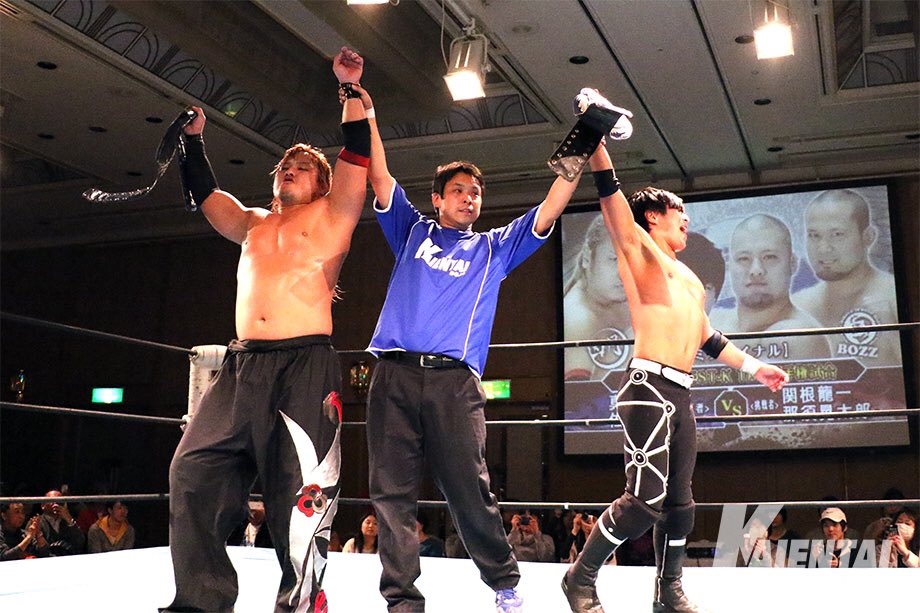 ~ Asahi stated that Makoto Oishi will be his partner as he will cash in his battle royal rights win for the next defense, which is set for Korakuen. 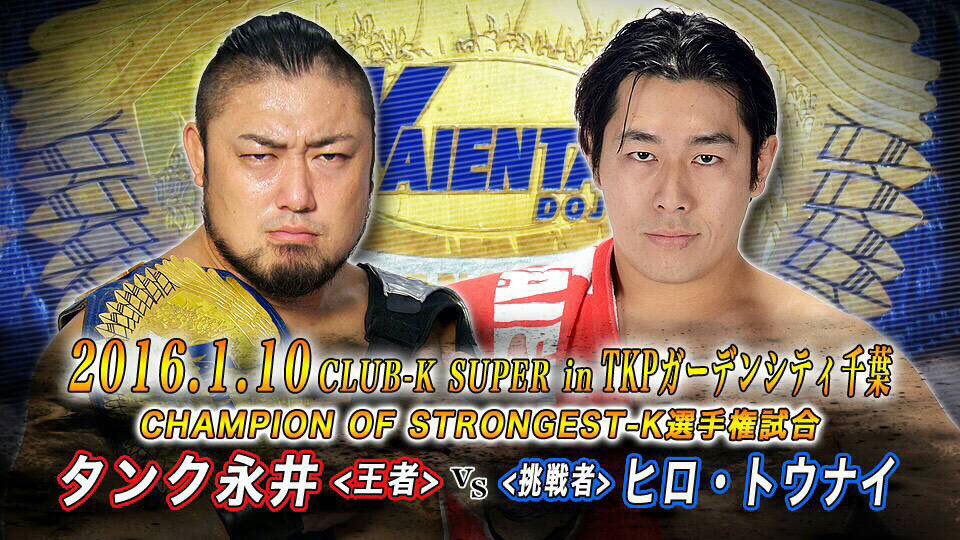 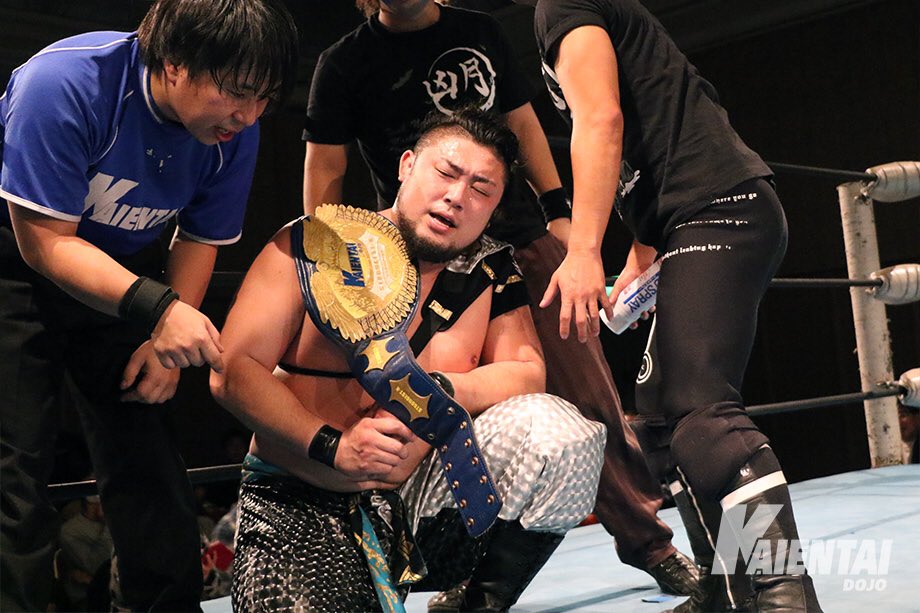 ~ Taishi Takizawa challenged the champion following the match as he is cashing in his win from the new year battle royal. 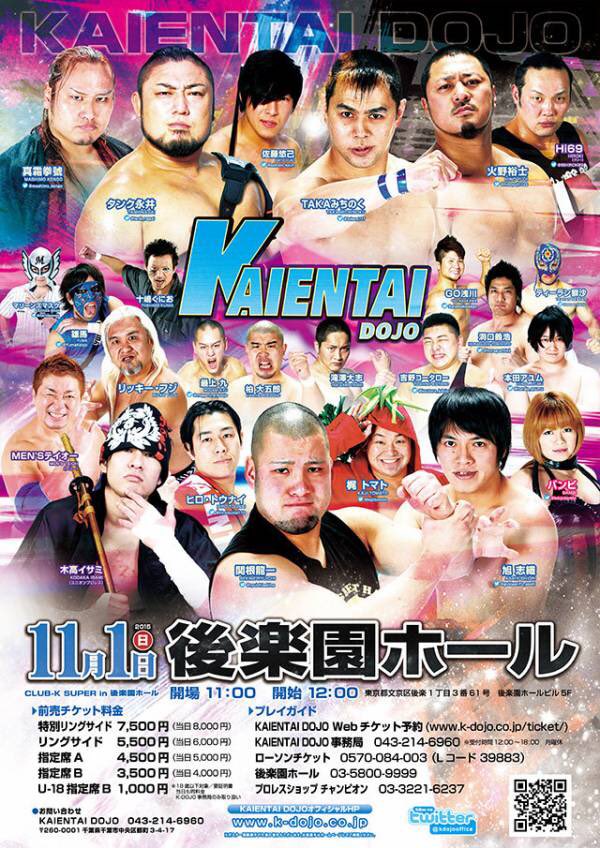 ~ A press conference took place before the show as Yuji Hino announced that he is indeed going freelance from K-DOJO as of this day. Though Hino did not specify as to where he may appear, but at this time he is no longer attracted to competing in K-DOJO at this time. 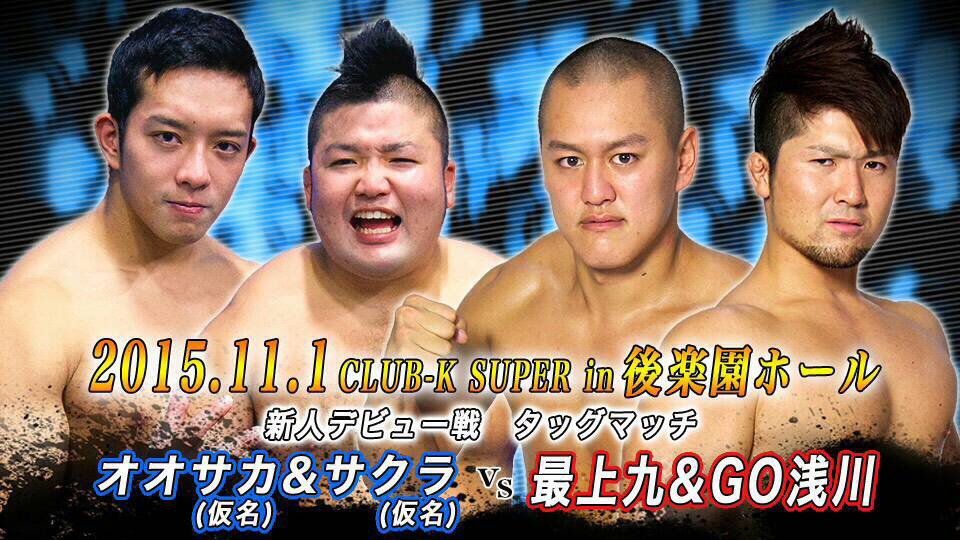 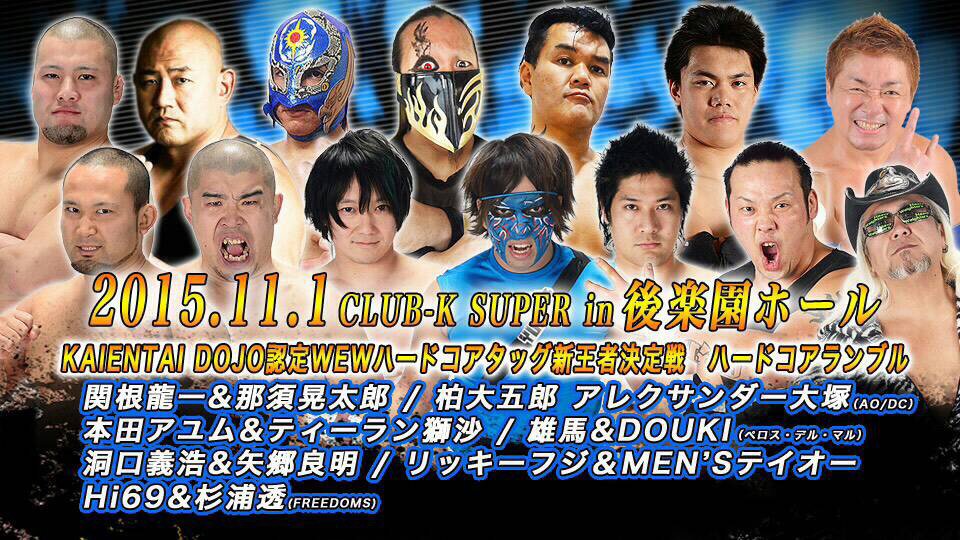 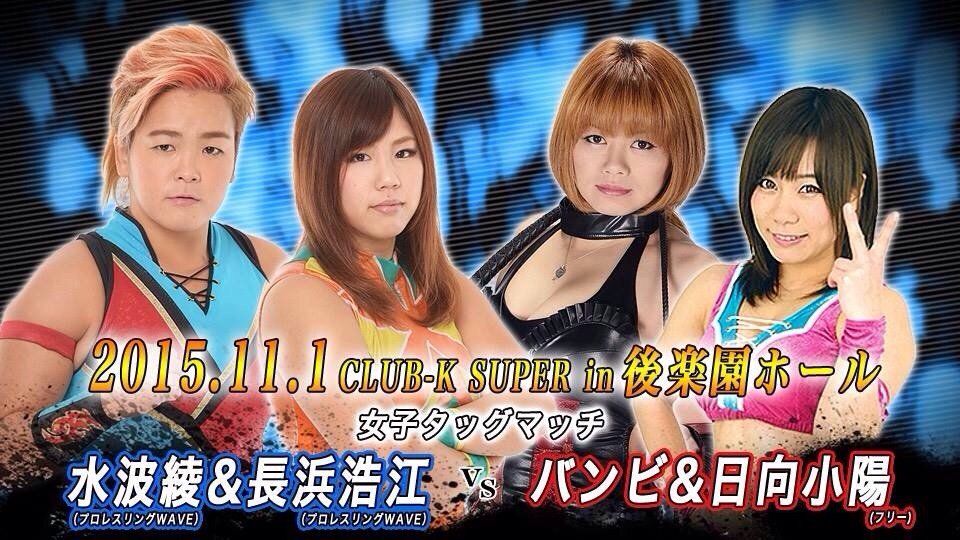 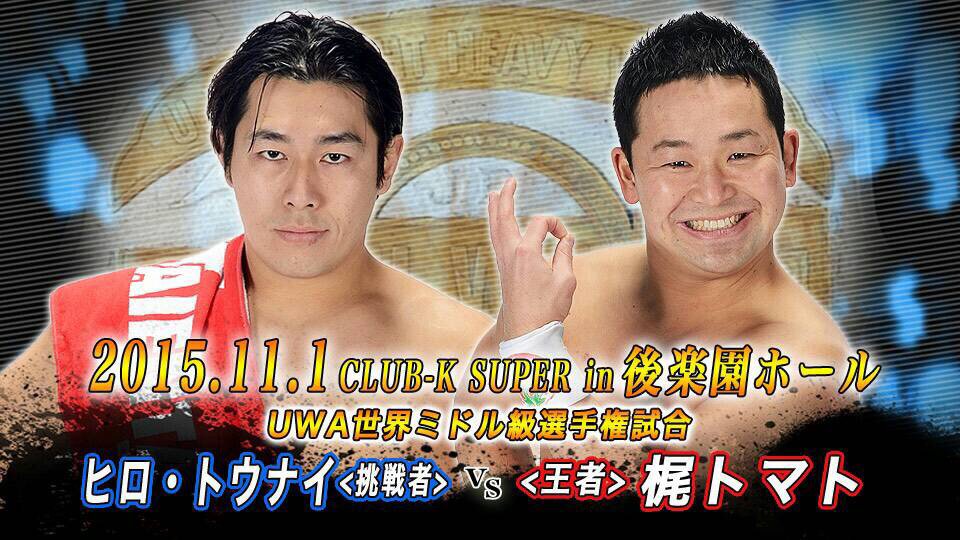 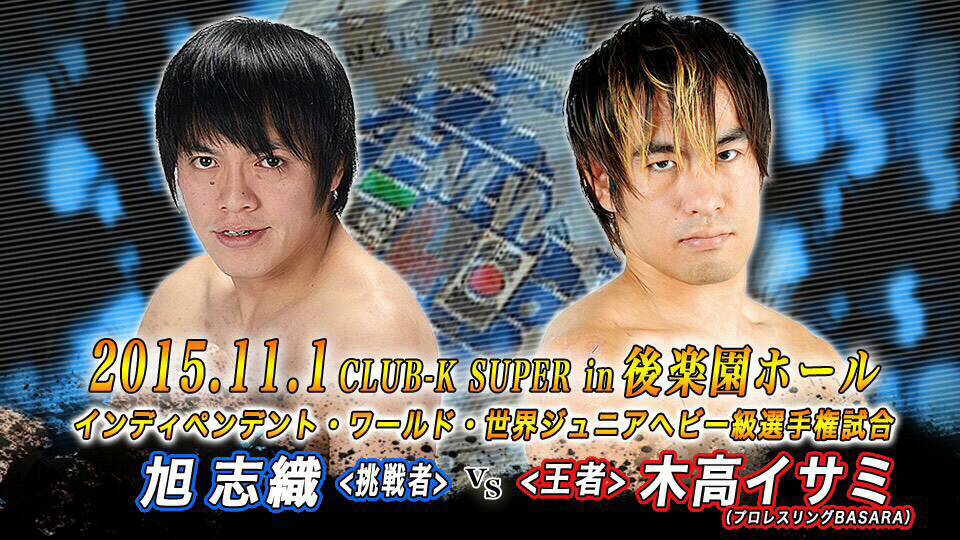 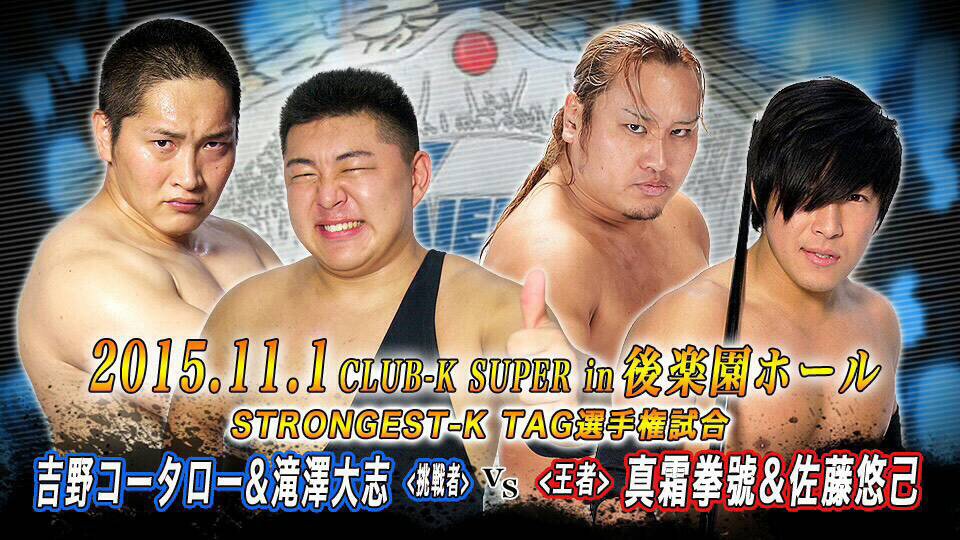 (6) CHAMPION OF STRONGEST-K TAG Championship Match: [Champions] Kengo Mashimo & Yuki Sato vs. [Challengers] Kotaro Yoshino & Taishi Takizawa
◆Winner: Yuki (12:30) with the New Tornado Clutch on Yoshino.
~ Yuki threw powder into Yoshino’s face allowing the pin to be set up.
~ Magatsuki continued to assault the challengers after the match, but Hiro Tonai rushed in to make the save. This also prompted a new alliance with Tonai, Yoshino, and Takizawa. 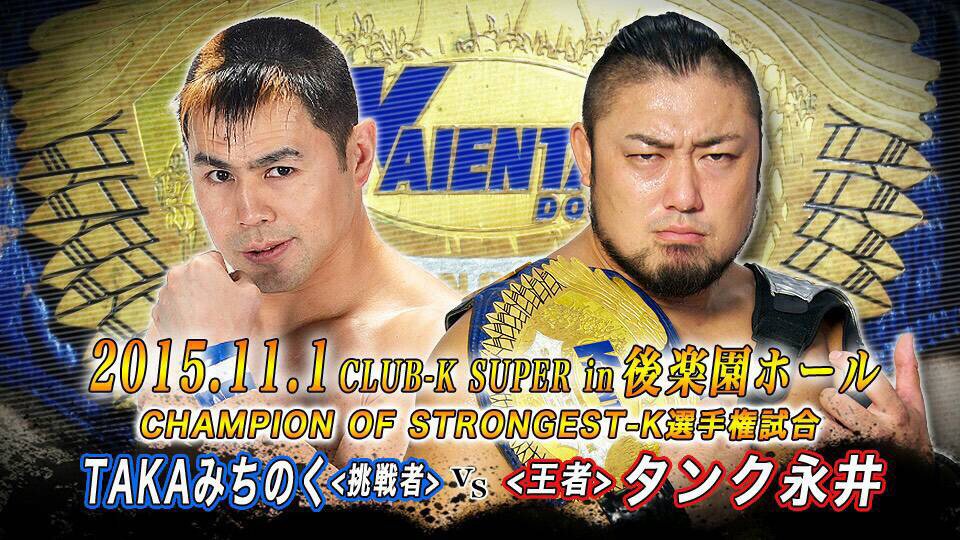 (7) CHAMPION OF STRONGEST-K Championship Match: [Champion] Tank Nagai vs. [Challenger] TAKA Michinoku
◆Winner: Tank (20:01) following a Diving Senton.
~ 2nd successful title defense.
~ Rookie Kyu Mogami came out to challenge the champion after the match, while Magatsuki was celebrating in the ring.
~ Tonai then declared an open challenge to Magatsuki with his new group. Asahi and Tank had a face-off.

[AJPW News] All Japan announced Kotaro Suzuki & Yohei Nakajima will be taking on Yuko Miyamoto & Isami Kodaka on November 15th to determine the new Asia Tag Champions, for the vacant belts (Kanemaru & Dragon vacated them earlier this month due to losing in the opening round of the currently ongoing Jr TAG BATTLE OF GLORY).

The PWF title committee formerly decided this after the two teams went to a draw in the on-going tag league, and both trying to stake a claim as contenders for the Asia Tag belts. The “Jr TAG BATTLE OF GLORY” concludes on October 23rd at the Korakuen Hall. 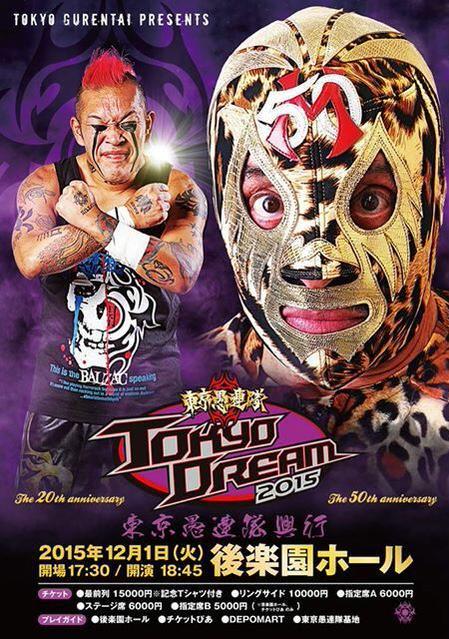 Below is the sole announced match at this time…

[Misc. News] “brother” YASSHI announced that he will be holding a show for his 15th anniversary on Janaury 24th, 2016 in Kyoto, Japan.

Several promotions will be involved as well, with Kasu-yaro Pro-Wrestling hosting the show, with Pro Wrestling WAVE, DOVE Pro-Wrestling, and Doutonbori Pro-Wrestling wrestlers competing as well.

The first round matches have been scheduled for the upcoming show on November 1st, full event card listed below, with the semi-final and final match scheduled to take place on November 23rd. 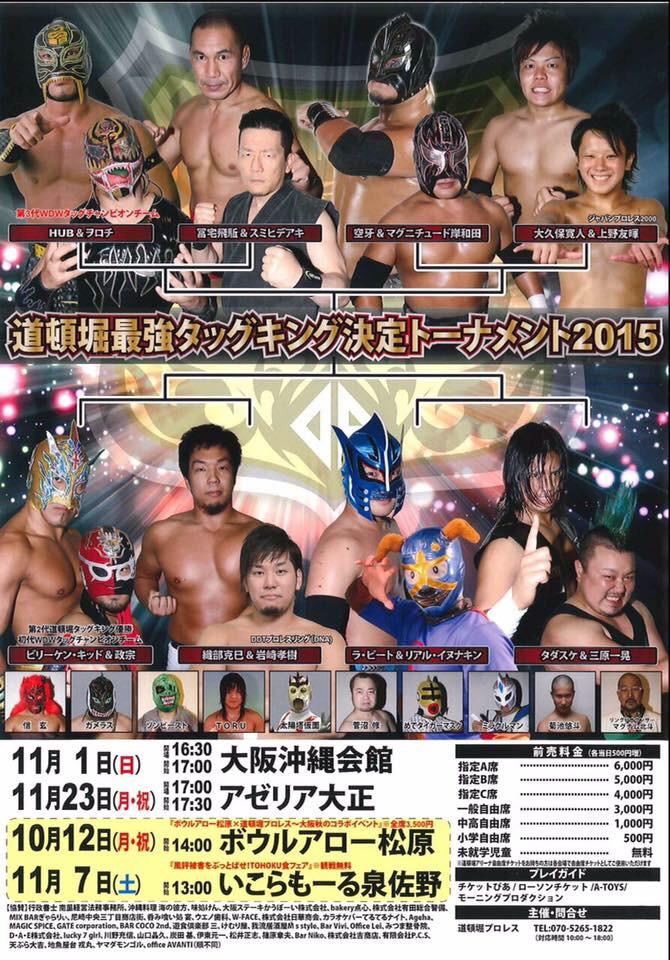 [K-DOJO News] It has been formally announced that the previously scheduled singles match between Isami Kodaka and Shiori Asahi has been changed to see the Independent World Junior Heavyweight belt in defense on November 1st.

Isami stated that he does his best to be a fighting champion with the belt as he has racked up eight defenses in total as of this upcoming match. Isami believes that he has enhanced the belt by taking on all challengers and is eager to defend the belt against the skilled technician.
Asahi stated that the Independent World Jr. belt has alluded him to this day, but he is eager to become a singles champion once more. He noted that Isami’s defenses will be hard to follow, but if he wins he wants to continue the strong trend of competition that has been set.

Below is the announced card for the upcoming show.

~ It was announced that FUMA will be defending the UNION MAX belt against on Isami on 8/30 @ Shinjuku FACE.

(6) 1 vs 3 Handicap Match: FUMA vs. Seiya Morohashi, Hiroshi Fukuda & Yusuke Kubo
◆Winner: Kubo (17:56) with a Mexican Roll on FUMA.
~ Kubo claims a major upset over the UNION MAX Champion, even though King Legion made their presence known.
~ Kubo will receive the next title defense against FUMA on 6/17 at the Shinkiba 1stRING.