(9) GWC Single Championship Match: [9th Champion] Daisuke vs. [Challenger] Mr. Gannosuke
◆Winner: Gannosuke (33:32) following a Fire Thunder.
~ Champion falls on his 8th title defense. Gannosuke becomes the 10th generation champion.
~ Gannosuke declared that this title win is in honor of his late friend Hayabusa.
~ He also said that everyone in GUTS works hard and he is proud to have returned to wrestling to be apart of this promotion. He hopes the promotion will continue to rise in the future.

(5) GWC Champions vs IWA Army: Daisuke, Shota & Kenichiro Arai vs. Buffalo, Keizo Matsuda & YUJI KITO
◆Winner: KITO (13:36) with a School Boy on Shota.
~ KITO claims the win over the GWC Tag Champion.
~ It was formally decided that the GWC Tag belts will be defended in a 3WAY at the Korakuen Hall show.
~ Buffalo called out for a singles match against Daisuke in April.

(6) GWC Contendership Match: Mr. Gannosuke vs. Tatsuhiko Yoshino
◆Winner: Gannosuke (19:49) following a Fire Thunder.
~ Gannosuke becomes the contender for the GWC Single belt on 5/8 at Korakuen.
~ Gannosuke praised Yoshino for the putting up a strong effort, but he aims to be a champion once more. He also mentioned that he wished Hayabusa could have watched today’s match.

(1) TECHNICAL WAR: Taro Yamada vs. Micro
◆Winner: Yamada (7:33) with a Blockbuster Hold.
(2) Young Power vs Tonpachi Machine Guns: Ryoya Akiba, Joji Otani & Shin Suzuki vs. Masao Orihara, Masked Mystery & Ryan Upin
◆Winner: Mystery (13:03) following a Chokeslam on Joji.
(3) BATTLE ARRIVAL: Drake Morimatsu vs. Kenichiro Arai
◆Winner: Arai (8:30) with a Backslide with his feet on the ropes.
(4) FIRE ROAD: Tatsuhiko Yoshino vs. Amigo Suzuki
◆Winner: Yoshino (12:56) with the Athlete German Suplex Hold.
~ Yoshino with a strong win over Amigo as he made it known that he wants another chance at that GWC singles belt. He made a bid for the challenge to take place in December for the 11th anniversary show. 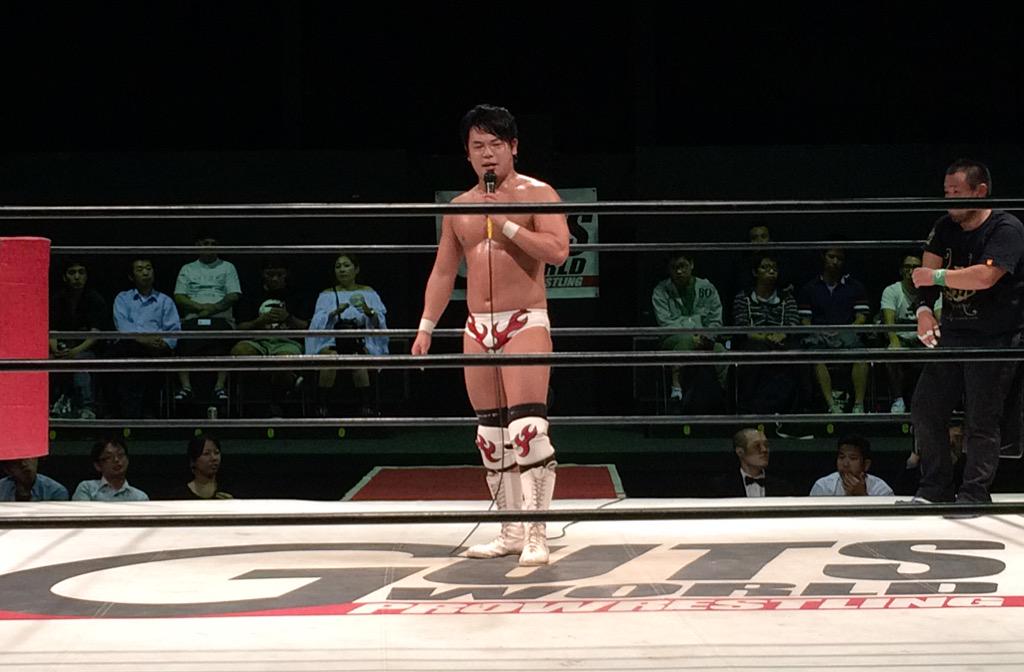 [GUTS World News] GUTS World released the full card for their upcoming show on September 29. The event will be headlined by Daisuke defending the singles championship against Shota. 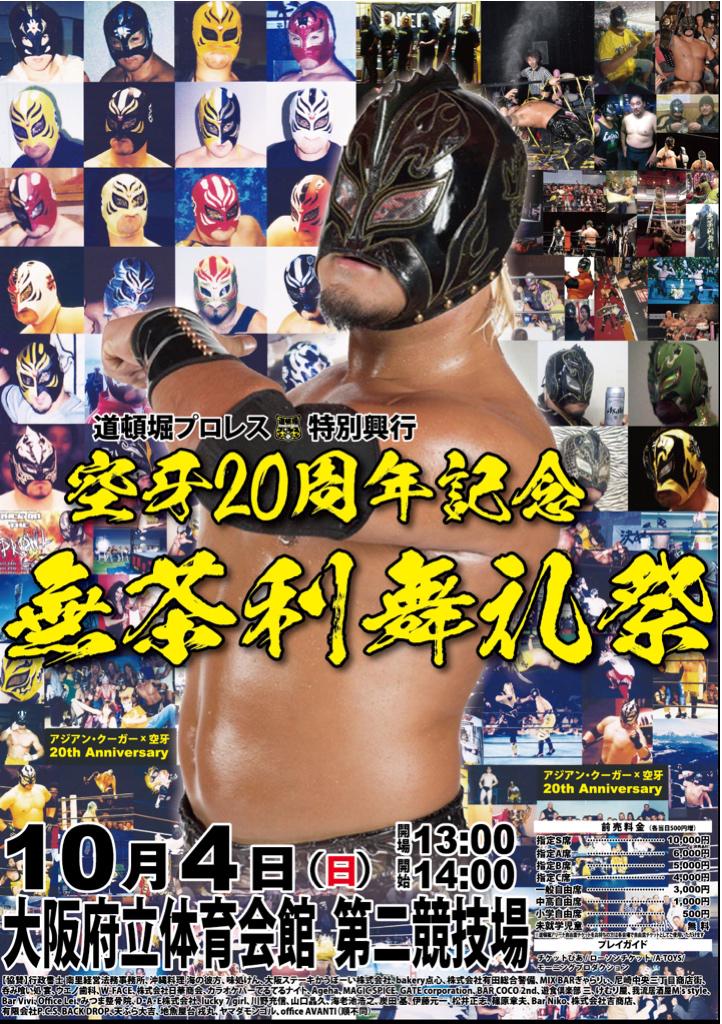 [Doutonbori News] Kuuga will be celebrating his 20th anniversary as a pro-wrestler on October 4 and the full card has been released for that upcoming show.
Originally known as The Asian Cooger years back in Osaka Pro-Wrestling, the now dark wrestler has adapted the name Kuuga and currently runs Doutonbori Pro-Wrestling out of Osaka, Japan.
The WDW Tag belts will also be defended on the show as HUB and Orochi defend against Tadasuke and Kazuaki Mihara.

[WRESTLE-1 News] W-1 will be bringing in the “Fan Appreciation Show” that was a staple of Keiji Mutoh’s back during his days of All Japan Pro-Wrestling. These shows have a more primary focus on comedy elements and having more fun and laughs/gags during the matches. This will see the return of these shows for the first time in nearly 3 years.

With that being said, W-1 will be bring in the F-1 Tag belts off old as Keiji Mutoh teams with is doppelganger Kannazuki, bette known as fake Mutoh to take on the team of Manabu Soya and comedian Sugi-chan. The F-1 Tag belts of course based upon the staple of laughter and wrestler.

Then W-1 held a press conference for the upcoming decision match to crown the new UWA WAR World 6 Man Tag Champions as the newly formed team of Kuroshio, Nakanoue, and Yoshioka, known as “Jackets” (name implying exactly as it means as they wear jackets), take on the “new WILD order” trio of AKIRA, Jun Kasai, and Kumagoro. In a strange addition a divorced famous couple will be joining in on the match as “Big Daddy” and his ex-wife Minako will be facing off in the match as well. The two divorced in 2013, and since then Minako has re-married to a now “former” pro-wrestler who is currently inactive, and this is the first time they have re-united in around 9 months.