Don Arakawa has passed away at the age of 71 back on December 1. A veteran of NJPW, having debuted back in July of 1972, Arakawa would mainly compete as a junior heavyweight and he even became coach within the dojo in the 1980’s. After his leave of New Japan in the late 80’s he would go on to compete for SWS, All Japan, and Big Mouth Loud as his major events of note. In May of 2011 he would earn the honor of New Japan’s Greatest Wrestlers award.

~ The full event card was announced for the “Fan Appreciation Show” that is set to take place on December 17 in Saitama.

~ The Yokohama 6 Man Tag belts were announced to be in defense on December 17 in Yokohama, as well as the full card for the show. 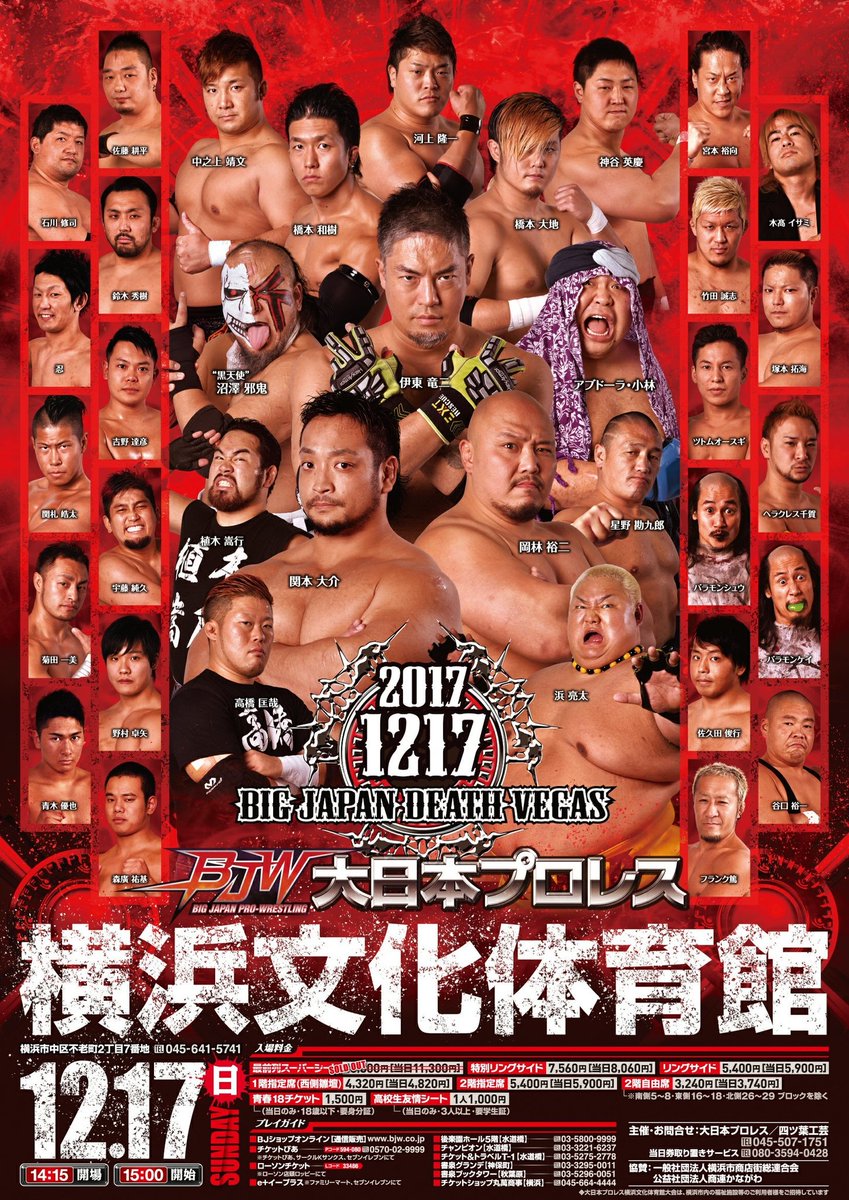 Mr. Gannosuke, Guts Ishijima, and Daisuke appeared today for a press conference to announced that GUTS World will disband on April 15, 2018 at Shinjuku FACE. As well as this will mark Mr. Gannosuke’s formal retirement form competition as well. Ishijima stated that this is a hard decision to make and much deliberation has been made as to the future of the promotion. With Tatsuhiko Yoshino having went to BJW, now Daisuke retired, and even the deliberation on where to hold this final show. Originally they wanted it to be at the Korakuen Hall, but they know the attendance is down and Shinjuku FACE is the only logical conclusion at this time. Ishijima noted that most of the wrestlers involved with GUTS World are up in age, including himself, and many of the wrestlers he has worked with in the early days have moved on. So he only feels it is time for all the wrestlers involved to broaden their careers elsewhere as well.

Mr. Gannosuke stated that he will be 50 years old next year and he finally feels it is time to end his time in the ring once and for all. That he has an undying love for pro-wrestling and he is thankful for the revival he has undergone in these last few years in GUTS World. That he managed to get in better shape and witness first hand the great talent that Daisuke, Tatsuhiko Yoshino, and others offered to the ring. Daisuke stated that he aims to pursue a similar role as a consultant to pro-wrestlers in the future, much like Gannosuke has done for GUTS World as of recent. That even though his career is done in the ring that he still wishes to help the future generations in anyway possible.

As for the title belts within the promotion, Ishijima stated that they will be sealed with the promotions end, but he will give each of the champions a final chance to defend the belts on the April 15 show.

The full event card was announced for the on-going tour and the Korakuen Hall show on December 22. Joining the previously announced four title matches, is a special singles match as Takashi Sugiura will be taking on Moose, stemming from Moose taking a direct win over Sugiura on the 12/3 show, and then The Great Kabuki will be competing in a special 6 man tag match as he final looks to end his career in the pro-wrestling ring. He will be teaming with the Heisei Ishingun team of Shiro Koshinaka and Akitoshi Saito as they take on the team of his former student in Yoshinari Ogawa, Go Shiozaki and Masao Inoue.

Below is the full announced card at this time, as well as the full tour has been updated on the event card listings on the website…