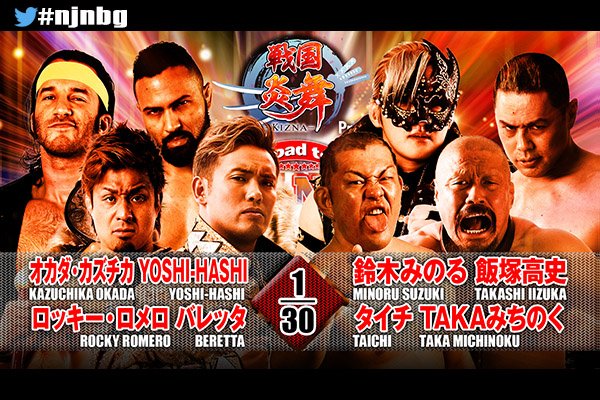 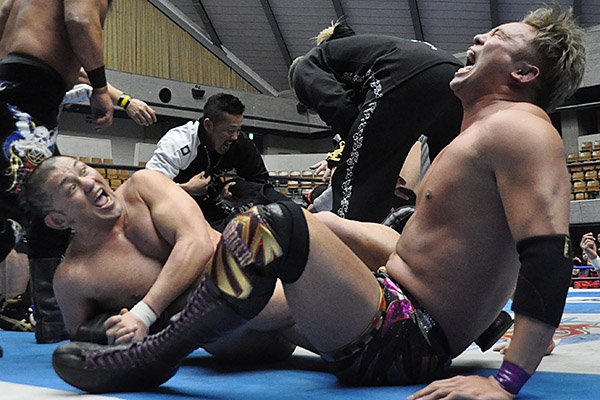 The first of these matches is a “Special Singles Match” between Yoshitatsu and AJ Styles. Yoshitatsu prevented Jeff Jarrett from interfering in the IWGP Heavyweight Championship match on the behalf of AJ Styles and thus they will collide at “POWER STRUGGLE”. This will be Yoshitatsu’s first match in New Japan in 7 years, as he signed with WWE in 2007 and was released from his contract this June.

The second confirmed match is a “Special Tag Match” that serves as a prelude to the main event of Wrestle Kingdom 9. IWGP Heavyweight Champion Hiroshi Tanahashi will team up with Kota Ibushi to take on Kazuchika Okada and YOSHI-HASHI. Both Tanahashi and Okada will be looking to gain momentum as the journey to Tokyo Dome begins!

The main event of “POWER STRUGGLE” has also been confirmed and it will be for the IWGP Intercontinental Championship. The reigning champion Shinsuke Nakamura will be making his first defense of the belt against his old rival Katsuyori Shibata. The two last faced off in singles competition during this year’s G1 Climax, but that was the first singles encounter between the two in ten years. Now with a championship belt on the line, the two rivals are bound to bring the competition to the next level.

Below is the card as of today…

(2)  NWA World Jr. Heavyweight Championship Match: [89th Champion] Chase Owens vs. [Challenger] BUSHI
◆Winner: Owens (7:02) following the package piledriver.
~ Following the match NWA President Bruce Tharpe called out and challenged Jushin Liger. Liger appeared to accept the challenge and it looks as though Liger could be challenging Owens for the NWA World Jr. Heavyweight Championship in the near future.

(7) NEVER Openweight Championship Match: [4th Champion] Yujiro Takahashi vs. [Challenger] Tomohiro Ishii
◆Winner: Ishii (17:48) following a brainbuster.
~ Yujiro falls on his 2nd defense. Ishii becomes the 5th generation champion.
~ Ishii regains the championship from Yujiro and gets some revenge as it was Yujiro who betrayed CHAOS and joined Bullet Club and soon after won the championship from Ishii.

(8) Special Tag Match: Hirooki Goto & Katsuyori Shibata vs. Shinsuke Nakamura & YOSHI-HASHI
◆Winner: Shibata (13:49) following the PK on YOSHI-HASHI
~Following the match, Shibata challenged Nakamura to a match for the IWGP Intercontinental Championship and it is a challenge that Nakamura seems willing to accept!

(9) Tokyo Dome IWGP Heavyweight Title #1 Contender Match: Kazuchika Okada vs. Tetsuya Naito
◆Winner: Okada (19:17) following the Rainmaker.
~ With his victory over Naito, Okada cements his place as the number one contender to the IWGP Heavyweight Championship at Wrestle Kingdom 9 at the Tokyo Dome.

(10) IWGP Heavyweight Championship Match: [60th Champion] AJ Styles vs. [Challenger] Hiroshi Tanahashi
◆Winner: Tanahashi (27:04) with the High Fly Flow.
~ Styles falls on his 4th title defense. Tanahashi becomes the 61st generation champion.
~ Naofumi Yamamoto made his return to NJPW during the match after nearly 7 years, stopping Jeff Jarrett from smashing a guitar over Tanahashi’s head and chasing the “Chairman” of Bullet Club to the backstage area.
~ Tanahashi becomes the IWGP Heavyweight Champion for the record- breaking 7th time in his career, breaking his tie for most reigns with Tatsumi Fujinami. Tanahashi also holds the record for most defenses in a single reign. He broke that record during his 6th reign when he defended against Minoru Suzuki at Wrestle Kingdom VI.
~Unless anything changes between now and January 4th, the main event for Wrestle Kingdom 9 will be Hiroshi Tanahashi versus Kazuchika Okada for the IWGP Heavyweight Championship.

[NOAH Event Updates] Pro Wrestling NOAH released the updated cards for their first half of shows that are set to take place in June.

All of the shows will be taking place in the southern region of Japan and numerous outside talent will be brought in to compete. New Japan’s Toru Yano and Takashi Iizuka will be regularly competing on the tour as they will be involved in key title matches throughout. Yujiro Takahashi will be involved on 3 shows from June 1st to the 3rd. Satoshi Kojima will be competing on 2 shows on June 5th and June 6th.

Super Crazy and Zack Sabre Jr. will be coming into to compete on every show in June. Super Crazy will also be facing off against a felow Mexican wrestler, who is in Japan, in Pesadilla on June 8th for a special single match.

[NOAH News] Pro Wrestling NOAH held a public press conference and signing ceremony for their upcoming show on May 12th at the Korakuen Hall.

With Kenta Kobashi retiring just a day before this show, the main theme for the May 12th show is a new beginning for NOAH. The show will be called “Ark New Chapter” and will be the theme for the show as everyone involved will be trying to show what they will bring for the future.
The main event especially between KENTA and Sugiura will definitely be seen for that. Sugiura stated that he is honored to have received the next defense, considering his last reign was very strong, and he himself has been “born again” following the injury he suffered that last year. Sugiura aims to show his best and he said that he will grip the helm and see that NOAH goes forward.

KENTA stated that he will protect the belt and continue on strong with his first ever reign. Sugiura has been one of KENTA’s more notable opponents in the last year and these two have shown that they can be very much physical against one another. KENTA wants to face the best challengers possible and he knows that he can get the best out of himself against Sugiura.

TMDK, Mikey Nicholls and Shane Haste, would like to bring the GHC Tag belts back home to NOAH where they belong. TMDK has been competing in NOAH for roughly 2 years now and they both agreed that they belong to NOAH. They have already proven that they can beat the champions, with their win during the Global Tag League, but will they be able to claim victory again, now that the tag belts are on the line, is the real question.

Below is the card for the May 12th show.

[NJPW News] New Japan announced the full card for their upcoming Anniversary Show on March 3rd.
The main event for the show will showcase the currently leading champions “aces” of their respected division as Hiroshi Tanahashi and Prince Devitt will face off in a special singles match.
Devitt picked up the win over Tanahashi in a tag match earlier this month, on February 3rd, but a week later Tanahashi would reclaim that loss. There was still a lot of shock to see Devitt take out the Heavyweight champion with the Bloody Sunday finisher and New Japan took it upon themselves to make a match of it.

The Semi-Final match will see Lance Archer getting a shot at Shinsuke Nakamura’s IWGP IC belt. Following Nakamura’s singles win over K-DOJO’s Kengo Mashimo on the 2.10 iPPV, Archer came out to the ring to call out Nakamura for a title shot. Archer has definitely proven himself as one of the strongest in NJPW today and he has the size to back it up as well. Nakamura has stated that he wants to face all challengers, let alone challengers from all over the world. This will mark Nakamura’s 6th defense of the belt.

The CHAOS vs. Suzuki-gun (SZKG) war shows no signs of stopping soon and will see an Eight-Man Elimination Tag match held on the show. Kazuchika Okada will lead CHAOS against Minoru Suzuki and his crew. The match will take place like a standard tag match, but when a wrestler is pinned, submitted or thrown over the top rope, they will be eliminated from the match.

The IWGP Junior Tag belts will also be on the line on the show as the “TIME SPLITTERS” will be defending their belts, for their 2nd defense, against the junior legend tag team of Jushin Thunder Liger & Tiger Mask IV.

Below is the full card for the show.

Later in March, New Japan will kick off the NEW JAPAN CUP 2013 which will be held for during a 6 day tour from March 11th to March 23rd.
~ No competitors have been announced at this time.