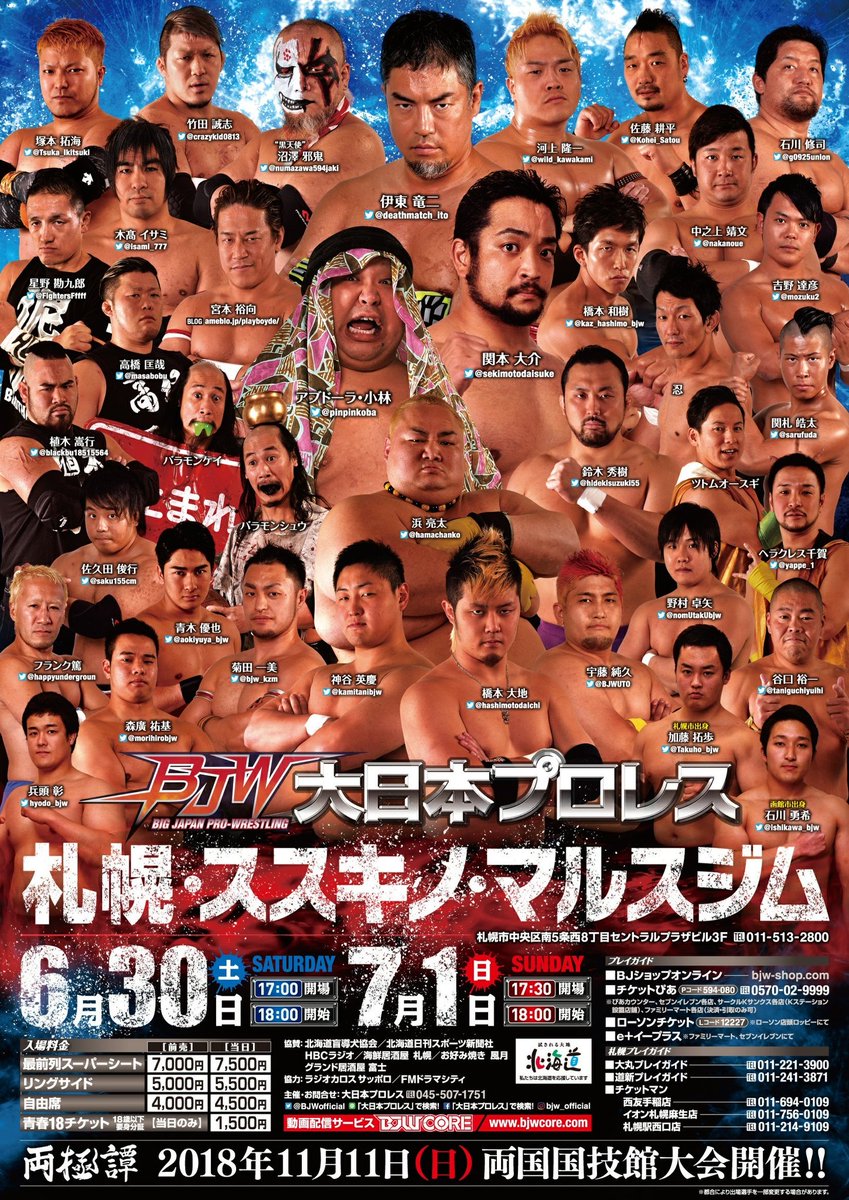 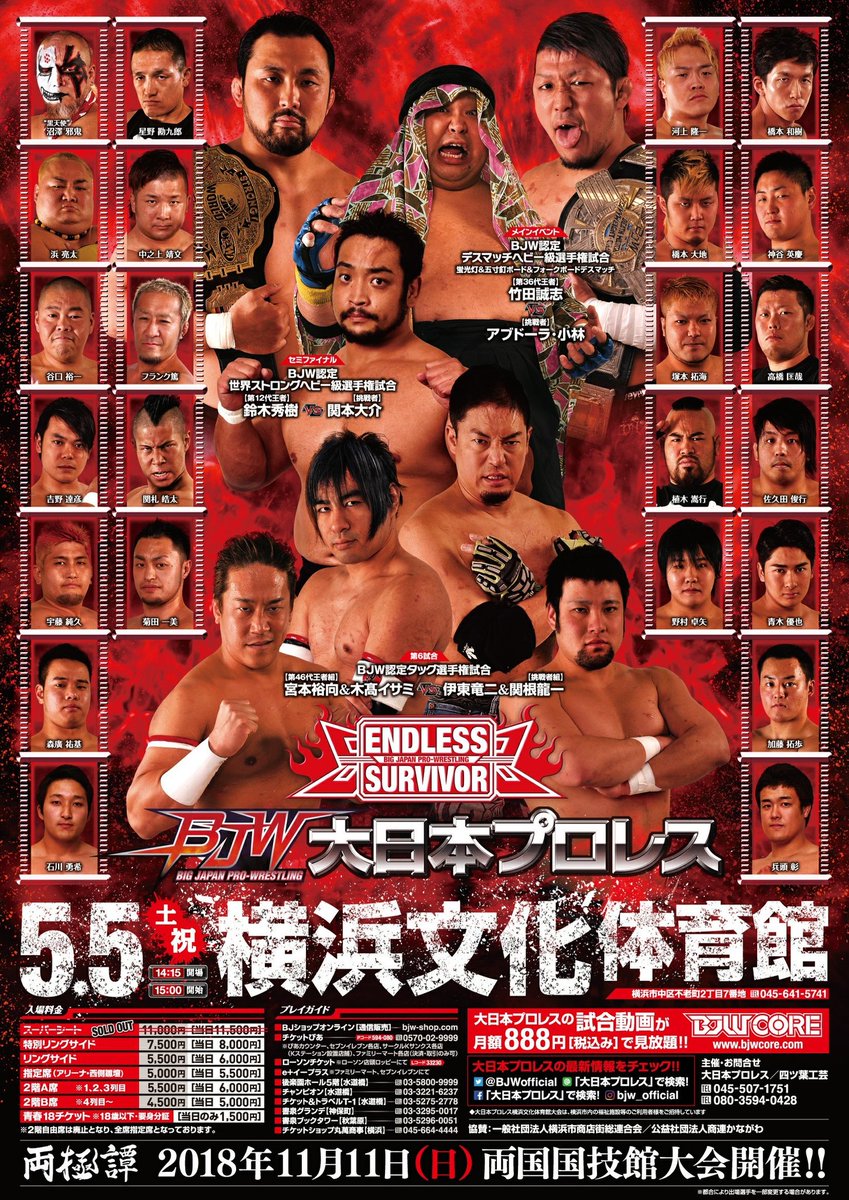 (7) BJW World Strong Heavyweight Championship Match: [12th Champion] Hideki Suzuki (FREE) vs. [Challenger] Daisuke Sekimoto
◆Winner: DRAW (30:00) Time Expired.
~ Champion retains with a draw, 1st successful title defense.
~ Sekimoto showed respect to Hideki as he put the belt around the champion’s waist.
~ Though when he was finishing up, Takuya Nomura and Fuminori Abe rushed the two and got physical. Takuya on Hideki and Abe on Sekimoto.
~ Hideki and Sekimoto left the hall together. 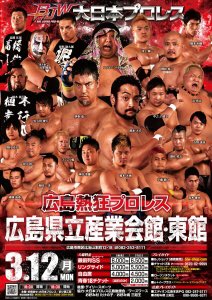 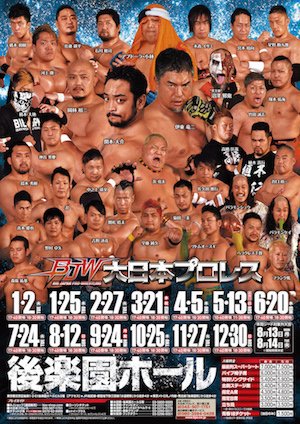 ~ BJW announced that they will be running at the Ryogoku Kokugikan, “Ryogokutan”, on November 11, 2018.

(6) BJW Junior Heavyweight Championship Match: [1st Champion] Shinobu vs. [Challenger] Yuya Aoki
◆Winner: Shinobu (12:34) with the S.E.X.
~ 2nd successful title defense.
~ Shinobu manages to pull through and claim the much needed win against the rookie who has been out to prove himself early in his career.

(7) BJW World Strong Heavyweight Championship Match: [10th Champion] Hideki Suzuki vs. [Challenger] Hideyoshi Kamitani
◆Winner: Hideki (17:53) via referee stop, with a Front Neck Lock.
~ 5th successful title defense.
~ Daichi attempted to rush Hideki after the match, after Hideki repeatedly asserted himself as the defining champion ,even over the fall Kamitani, but he was held back by the other wrestlers who were inside the ring as seconds.

(8) BJW Death Match Heavyweight Championship Match: [36th Champion] Masashi Takeda vs. [Challenger] Minoru Fujita
◆Winner: Takeda (16:57) following the Reverse U-Crash.
~ 2nd successful title defense.
~ Fujita received a strong fan reaction after the match for his strong effort and showing, but Takeda continues to prove that it is his time to be the champion. 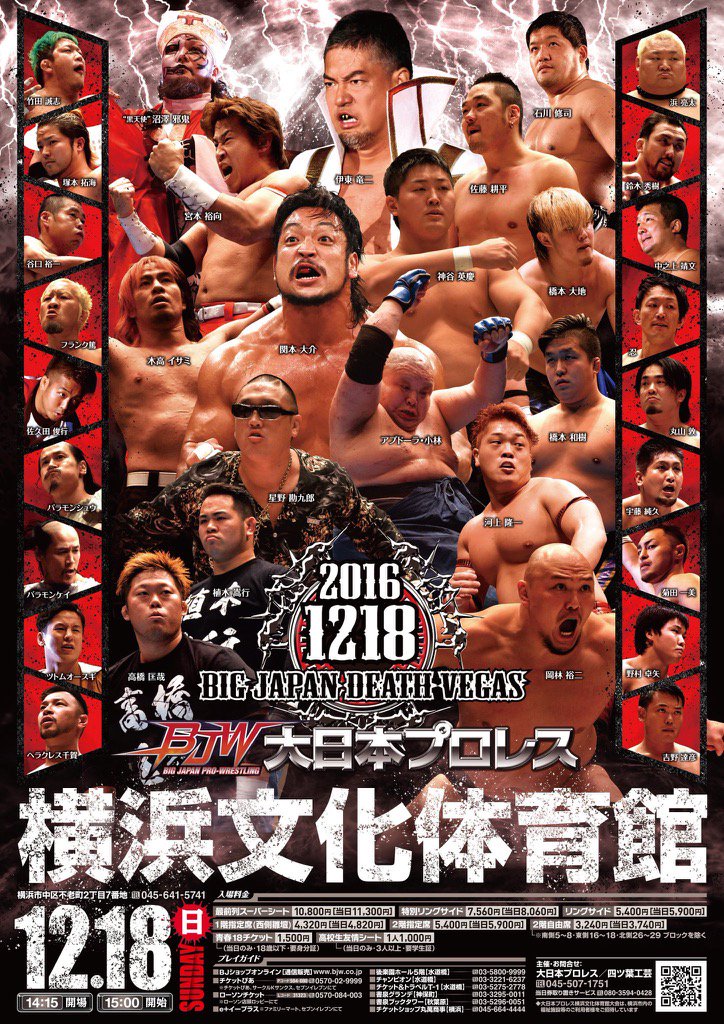 (8) BJW Deathmatch Heavyweight Championship ~ Fluorescent Light-tube Double G Shock Death Match: [33rd Challenger] Kankuro Hoshino vs. [Challenger] Abdullah Kobayashi
◆Winner: Kobayashi (18:49) with a Boston Crab.
~ Champion falls on his 4th title defense. Kobayashi becomes the 34th champion.
~ Kobayashi stated that he has worked hard to reach this point and aims to make this a strong reign.
~ Hoshino asked for a rematch in the future against the new champion.

Following the conclusion of the Champion Carnival, a press conference was held today to formally sign the upcoming Triple Crown defense. As well as Atsushi Aoki and K-DOJO’s Kaji Tomato were present to sign their upcoming World Jr. match as well.

Following the Champion Carnival, BJW’s strong leader Daisuke Sekimoto emerged the victor as his years of hard work have lead him achieve part of his dream. Now he moves on to challenge for the Triple Crown belt for the first time in his career on May 25 at the Korakuen Hall. Sekimoto has declared that he wants to capture all the belts in All Japan starting with an upcoming challenge for the Asia Tag belts on 4/29 when he teams with the veteran Great Kojika. Miyahara though has vowed that he shall reclaim his loss against Sekimoto, which his suffered in the final block match of the league, as well as to defend the belt from outside promotion. Speaking of the 5/25 show, Sekimoto’s main tag partner Yuji Okabayashi has been placed against the reigning World Tag Champion Zeus in a special singles match. Sekimoto acknowledged this as he stated that they aim for the World Tag belts in the near future. Stemming off Sekimoto beating Zeus in the finals of the Carnival.

As for his performance in the Carnival, Miyahara stated that he is eager to reclaim his loss against Akiyama and the draw he suffered against Mashimo. Though first he must survive a formidable challenge in Sekimoto.

Then a press conference was held for the upcoming World Junior Champion match as Atsushi Aoki will be taking on Kaji Tomato on 5/7 in Chiba. Kaji challenged the champion back on 5/9 of the opening day of the Champion Carnival in which Aoki accepted. Aoki has previously stated that the doors are open for anyone and everyone to make a challenge in which he commends Kaji for stepping forward. This match also stems way back to the Junior League back in 2014 where Kaji actually claimed an upset win over Aoki. Aoki noted that he has seen how much Kaji has grown since then and wants a strong match, but also he declared that he will remain champion. Kaji acknowledged that this will be first ever challenge for the belt and though Aoki asked him to not dance on the way to ring, as that is part of his shtick, Kaji stated that he wants to be at his highest level heading into the match. That he wants to set his own pace as the challenger.

Among any other news bits, Super Tiger and Ryoji Sai have both stated that they aim to continue competing in All Japan in the future. Which the 5/22 show specifically has been changed as them two will team together as they take on Miyahara and Lee.

~ The scheduled deathmatches for 4/28, 29 and 5/5 have been updated to reflect their formats.

~ More matches were announced for the upcoming Osaka show on 5/22. Among the announcements is that HUB will be competing under his former name ZERO on the show as he takes on Takeshita. Takeshita personally requested the match to be against ZERO.

~ The Road to Wrestling Dontaku continued today in Tokushima.

~ Tomorrow will see the IWGP IC belt in defense as Omega defends against Elgin.

~ Fifth day of the GTL took place today in Okayama. 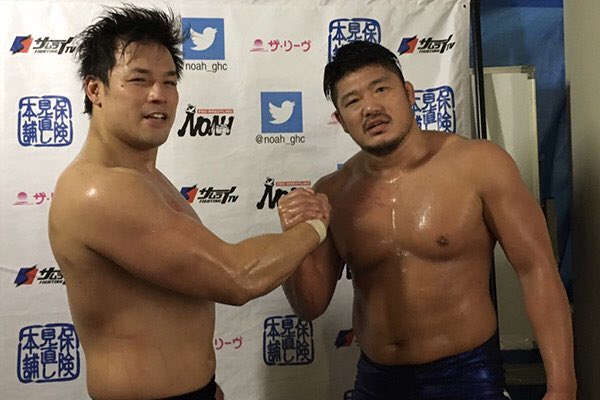 ~ Shiozaki & Taniguchi emerged successful as they claim the top spot in the league while Nakajima and Kitamiya look to now have no chance in regards to their standing.
~ Boss Suzuki claims the win over his near dominate tag champion team. Still mutual respect between the teams as they know their common goal is to keep NOAH from winning.
~ Kojima with the final blow today against Benjamin as he secures “TenCozy” at the top of the league standings.
~ Ohara took his winning streak to 3-0 over Kanemaru in the tag prelude matches leading to the junior title match.

BJW results from May 5, 2015 – Deathmatch Heavy: Miyamoto vs Kobayashi

(0) Isamu Oshita & Kota Sekifuda vs. Yoshihisa Uto & Tatsuo Omori
◆Winner: Sekifuda (10:15) with a Boston Crab on Omori.
~ Sekifuda celebrates a a win as he now heads off to train in the USA.
~ Sekifuda told everyone that he has no regrets at this time and hopes to come back to Japan one day as strong as possible, a world warrior.

(7) BJW World Strong Heavyweight Championship Match: [5th Champion] Shuji Ishikawa vs. [Challenger] Daisuke Sekimoto
◆Winner: Sekimoto (21:51) with a Deadlift German Suplex Hold.
~ Champion falls on his 2nd title defense. Sekimoto becomes the 6th generation champion.
~ Sekimoto thanked the fans for supporting today’s bout and that Shuji is strong, but today he (Sekimoto) was stronger. He declared that he will continue to increase the importance of the belt as champion. (I heard nothing but great things about this match, said to have been one of the best BJW matches this year so far.)
~ Sekimoto & Kamitani challenged Ishikawa for a shot at the tag belts.
~ Kamitani also challenged his tag partner, and mentor, for a shot at the Strong belt.

(3) DEATHMATCH SURVIVOR ~ A Block ~ G Shock Death Match: Masashi Takeda vs. Kankuro Hoshino
◆Winner: Hoshino (13:22) with the Gokudo Clutch.
~ Hoshino with the win over the FREEDOMS champion. Hoshino called out for the final to be him against Inaba. A Gokudo Combi showdown.
~ Hoshino (1 win = 2 points)
~ Takeda (1 loss = 0 points)

(5) Kohei Sato, Ryuichi Kawakami & Kazuki Hashimoto vs. Daisuke Sekimoto, Yuji Okabayashi & Hideyoshi Kamitani
◆Winner: Sekimoto (13:46) with a German Suplex Hold on Kazuki.
~ Sekimoto stated that the momentum is on his side as he heads into the ZERO1 Tag title match later on tonight. Even with the sparks that were apparent between him and Kohei, who is his partner in the title match.

(6) BJW Deathmatch Heavyweight Championship ~ Needle Hell (321 count pinholders, 53,0000 count thumbtacks) Death Match: [30th Champion] Yuko Miyamoto vs. [Challenger] Jaki Numazawa
◆Winner: Miyamoto (18:26) with a Moonsault Press.
~ 5th successful title defense.
~ Miyamoto moves on for his next defense on 5/5 in Yokohama against the winner of the Ikkitosen.
~ With the loss Numazawa moves on to compete in the Ikkitosen.

12 wrestlers will compete in this years league with the first day starting on March 1 and leading up to the final show of the league which is scheduled for April 19.
———————————————————-
Announced competitors…

[BJW News] Big Japan announced that they will be holding shows later on this year for both Ryuji Ito and Daisuke Sekimoto who will be celebrating their 15th anniversaries as pro wrestlers.

Ito’s show has been announced to be taking place on August 15th at the Korakuen Hall in Tokyo and then Sekimoto’s will be a week later on August 21st at the BODYMAKER COLOSSEUM, 2nd Stadium in Osaka.

No other details have been announced at this time, but early speculation is that Ito’s show will be primarily focused on “death” style matches and Sekimoto’s on the “strong” style matches.

(5) Shinya Ishikawa vs. Hideyoshi Kamitani
◆Winner: Shinya (10:07) with a Manjigatame.