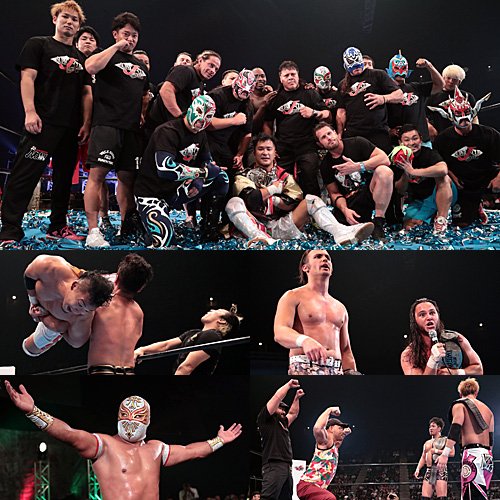 (3) Hirooki Goto vs. “King of Darkness” EVIL (formerly Takaaki Watanabe)
◆Winner: Goto (8:53) via foul, after Tetsuya Naito attacked Goto.
~ Shibata made the save as him and Naito had a standoff. 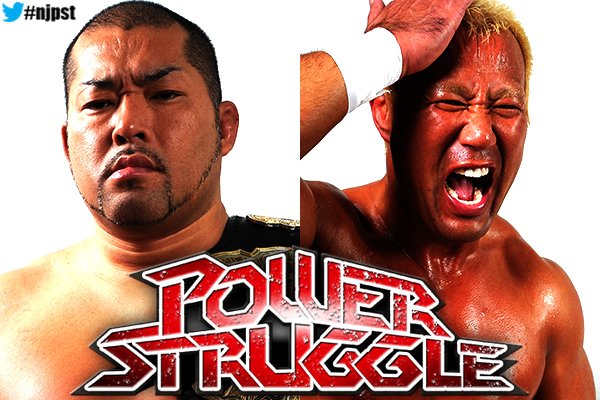 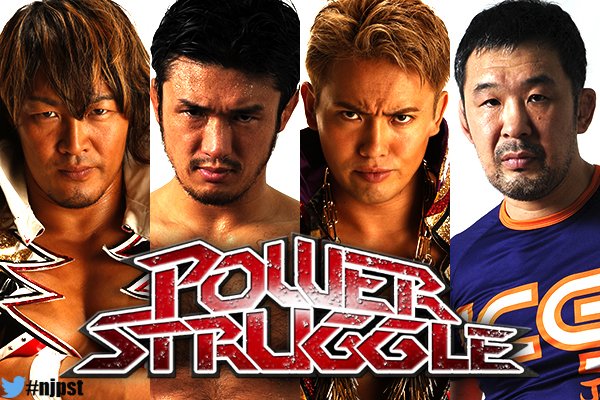 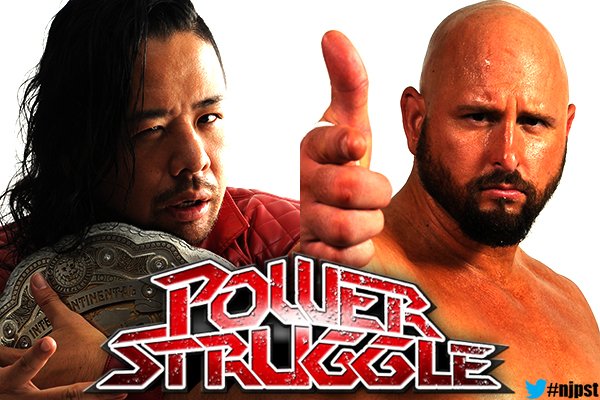 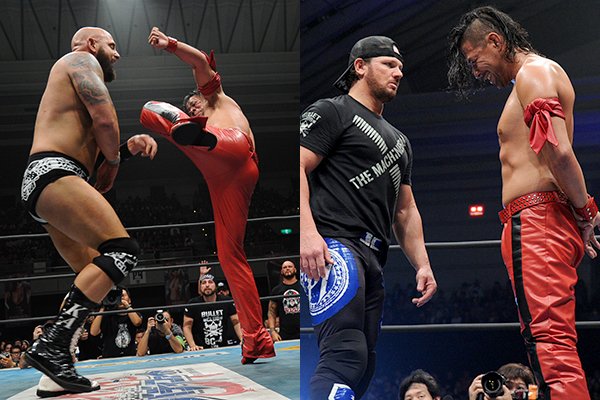 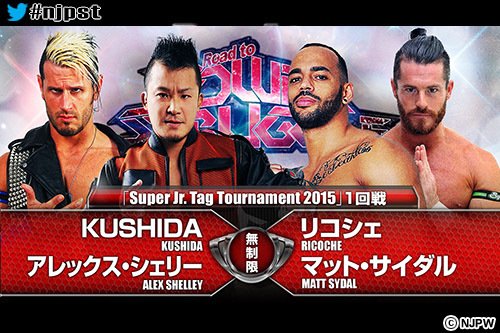 New Japan announced that CMLL will be returning in January of next year for “CMLL FANTASTICA MANIA 2016”. A total of 6 shows will be held between January 17th and 24th.

(4) Super Jr. Tag Tournament 2015 1st Round: Jushin Thunder Liger & Tiger Mask IV vs. Bobby Fish & Kyle O’Reilly
◆Winner: Fish (10:24) following the Chasing the Dragon on Tiger.
~ reDRagon move on to the next round.

(6) Super Jr. Tag Tournament 2015 1st Round: Ryusuke Taguchi & Mascara Dorada vs. Matt & Nick Jackson
◆Winner: Matt (11:08) following the Indy Taker on Dorada.
~ Young Bucks move on to the next round.

~ The semi-final matches will look as follows…

[Update] Due to injury Alex Shelley has been pulled from this years BOSJ.

Shelley suffered both ligament damage and a chip fracture in his left foot whilecompeting in his match against David Finlay on 5.22 at the Korakuen Hall.

Due to his absence all the rest of his scheduled opponents will automatically claim 2 points and all of the non-BOSJ matches that he was scheduled to compete in will be changed as well.

~ Alex Shelley suffered an ankle injury at yesterday’s show, his match that was scheduled against Romero today has been pulled from the show… (not sure to the extent of the injury or if NJPW will be giving the points directly to Romero. I’ll update it as such when the information is released.)
[Update: New Japan will be holding off until Monday’s show to make an announcement, mainly to see if Shelley will be able to compete or not.]
(-) BOSJ B BLOCK Match: Alex Shelley vs. Rocky Romero

The next big show will be DOMINION 7.5 in OSAKA-JO HALL.

[NJPW News] New Japan announced the headlining matches for their next big show “WRESTLING DONTAKU 2015“ which will be on May 3rd in Fukuoka.

The main event for the show will see Shinsuke Nakamura putting the IWGP Intercontinental belt up against Hirooki Goto. Nakamura downplayed Goto as even being a potential contender until this last show on 4/5 where Goto claimed a pin-fall victory over the champion. Goto used force to make Nakamura aware that he was serious about wanting a chance at the belt. Goto previously held the IC belt back in 2012 before falling to Nakamura in the Summer of that year. Will Goto become champion once more or will Nakamura continue to hold the IC belt as if it was his belt alone?

Three special tag matches have been announced for the show as the IWGP Heavyweight Champion AJ Styles and Yujiro Takahashi will be teaming to take on the next contender for the belt Kazuchika Okada and his partner YOSHI-HASHI. Styles vs. Okada has been set for “DOMINION 7.5” this Summer and this match will be an early prelude before their scheduled bout.

The next will be a 6 man as Togi Makabe teams with Hiroshi Tanahashi and Katsuyori Shibata to take on Tomohiro Ishii, Toru Yano and Kazushi Sakuraba. All 6 men have had a feud against one another in the recent months and this match will be a following Ishii defending the NEVER belt against Makabe at a special event on April 29th.

The last of the tag matches will see something that is almost never seen in a New Japan ring as a mixed tag match will be taking place. Following the show on 4/5 new tag champions were crowned in Kingdom, Bennett and Taven, but not without the help on Maria Kanellis. The former champions Anderson and Gallows look to even the odds as Gallows’ wife Amber Gallows will be returning to Japan once more, but this time to compete in the ring. This will mark the first time since October of 2002 that any female wrestlers, former WWF/E wrestler Chyna, have competed in New Japan.

Then lastly of note, both IWGP Junior class belts will be in defense on the show. First up will see Kenny Omega defending the IWGP Junior singles belt against Alex Shelley. Shelley has yet to hold a singles belt in NJPW but has always been seen as an influential competitor for the junior wrestlers, but Omega with his own talents has an advantage of Bullet Club being at his side for the match.
Then the IWGP Jr. Tag belts will be contended in a 3WAY as the new champions “Roppongi Vice“ Rocky Romero and Barreta take on the former champions “Young Bucks“ Matt & Nick Jackson and another former champion team in “reDRagon“ Bobby Fish & Kyle O’Reilly. This will be a huge chance for the new champions as they have the least amount of experience being together compared to the rest.

Below is the announced card for the next big show…

New Japan announced that they will hold a show on July 5th, 2015 at the historical Osaka Castle Hall.

(7) Special Singles Match: Yoshitatsu vs. AJ Styles
◆Winner: Styles (12:58) following the Styles Clash.
~ Yoshitatsu was unsuccessful in his return and received an Acoustic Equalizer (guitar shot) from Jarrett following the match. Hiroshi Tanahashi, Tetsuya Naito and Tomoaki Honma ran Jarrett and Scott D’Amore out of the ring. Styles remained in the ring, leading to confrontation with Naito.

[NJPW News] The full event card has been announced for New Japan’s next show “DOMIONION 6.21” on June 21.

Following his win in the BOSJ, Ricochet will be moving on to face the IWGP Junior Heavyweight Champion Kota Ibushi at DOMINION. New Japan is billing this as something the fans do not want to miss as two of the top juniors in the professional wrestling world today face off to determine who truly is the #1 junior.

During the final day of the BOSJ, Toru Yano found a new surprise ally as Kazushi Sakuraba came to his aid following a continued assault by Minoru Suzuki and Takashi Iizuka. This will defeinitely make for a unique match as Yano is ever-looking to exact some revenge against his former partner Iizuka’s betrayal, and then possibilities of the shoot style aspect of Sakuraba and Suzuki could be there as well.

The opening match on the card will see the IWGP Jr. Tag belts being defended as the Young Bucks, Matt & Nick Jackson, put their belts once more on the line against The Time Splitters, KUSHIDA & Alex Shelley. KUSHIDA and Shelley both had strong showings in the BOSJ with KUSHIDA even making it to the semi-finals. Time Splitters will be getting what could potentially be their final shot, at this time, for the Jr. Tag belts.

Then lastly it was announced that Yuji Nagata will be teaming with Tomoaki Honma to take on Hirooki Goto & Katsuyori Shibata and then Tetsuya Naito takes on Tama Tonga in a singles match.

Sunday’s finals will look as follows…