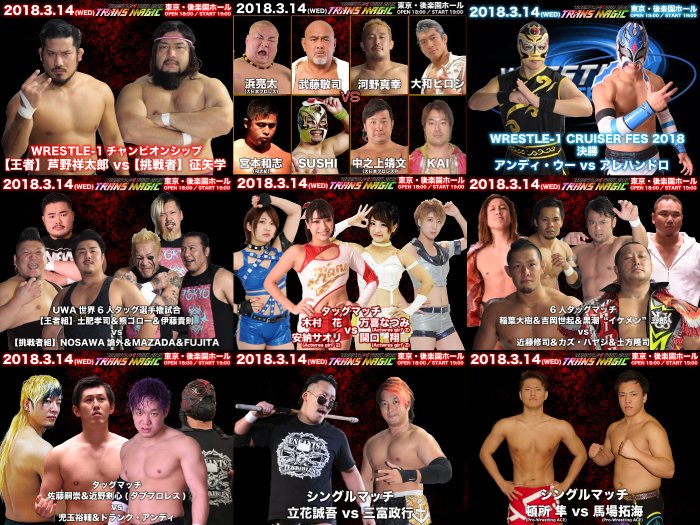 (6) WRESTLE-1 CRUISER FES 2018 Final Match: Andy Wu vs. Alejandro
◆Winner: Alejandro (10:54) with the EDO ES TADO (Tilt-A-Whirl DDT).
~ Alejandro wins the CRUISER FES 2018, as Seiki Yoshioka came out and asserted himself as the reigning W-1 Cruiserweight Champion. As Alejandro is the next in line to challenge for the belt.

(7) Special 8 Man Tag Match: Keiji Mutoh, Ryota Hama (BJW), SUSHI (FREE) & Kazushi Miyamoto (FREE) vs. Masayuki Kono, Hiroshi Yamato, Yasufumi Nakanoue (BJW) & KAI (FREE)
◆Winner: Mutoh (19:08) with a Moonsault Press on Kono.
~ Mutoh thanked everyone, even SUSHI (which Mutoh laughed still laughed for a moment), for coming out and taking part in this match today. As Mutoh will be taking an extended period of time away from the ring as he undergoes knee replacement surgery. Mutoh stated that it is his intention to return to the ring, but today was the last ever moonsault that he will be able to do even if he can return following the procedure.

(8) WRESTLE-1 Championship Match: [11th Champion] Shotaro Ashino vs. [Challenger] Manabu Soya
◆Winner: Soya (23:14) following the Wild Bomber.
~ Champion falls on his 8th title defense. Soya becomes the 12th champion.
~ Soya thanked AKIRA for helping him wake up from his recent slump and unwillingness to strive for more. He even stated that his intention is to challenge for the W-1 Tag belts along with AKIRA. Soya stated that he wishes for everyone to take notice of W-1, as this years marks the 5th year of the promotion’s launch, as he aims to defending champion.
~ Ashino was furious at himself for being the sole member of “Enfants Terribles” to suffer a loss tonight. He ended the backstage interview declaring that it is the end of everything and that it is all over. 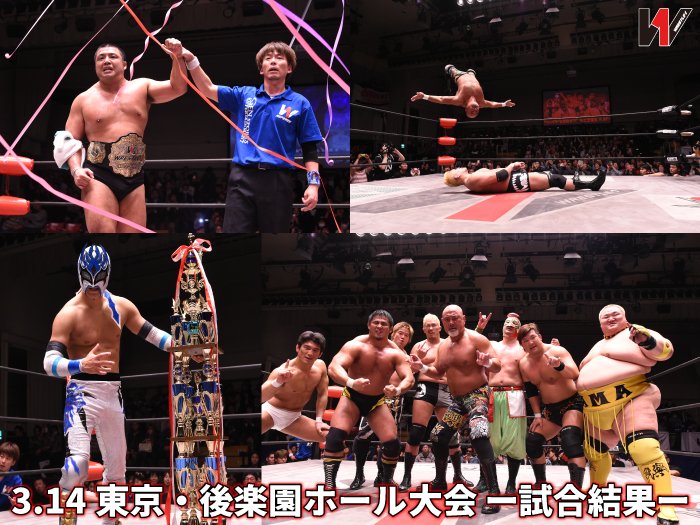