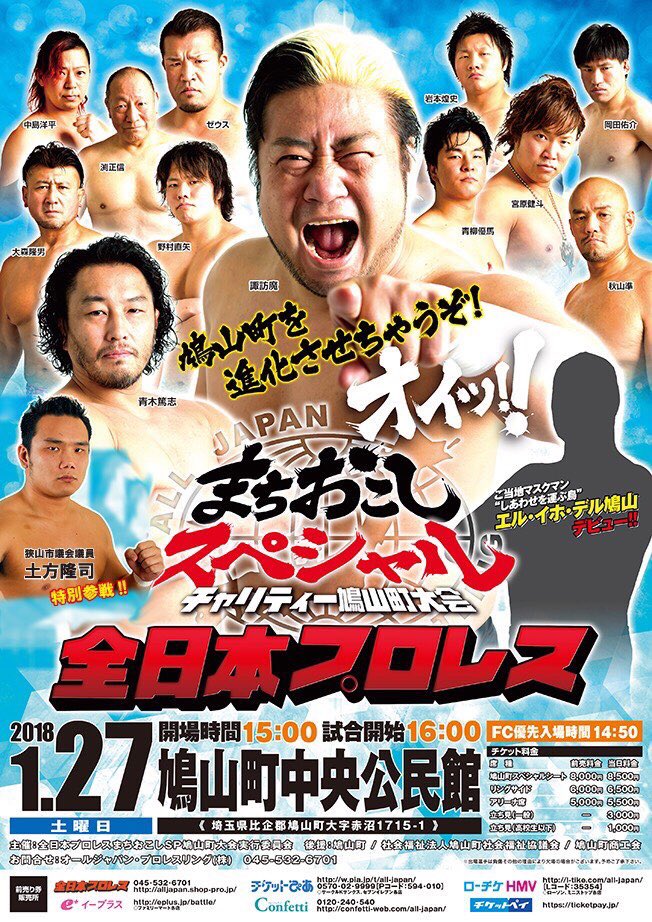 (1) Atsushi Aoki vs. Yusuke Okada
◆Winner: Aoki (9:36) with an Udegatame.
~ Aoki was critical on the rookie, as his desire to join Evolution contines to be denied.
(2) Jun Akiyama vs. Weekday Mask
◆Winner: Akiyama (8:45) following an Exploder.
(3) Ryuji Hijikata (FREE) vs. Keiichi Sato (FREE)
◆Winner: Hijikata (8:13) following a Fisherman Buster.
(4) Naoya Nomura vs. Yohei Nakajima
◆Winner: Nomura (8:20) following the Maximum.
~ With Aoyagi out with an ankle injury, the Asia Tag belts have been officially vacated.
~ Though the Asia Tag match at Yokohama on 2/3 is still to happen. Which Nomura stated that he is willing take up Ryoji Sai’s request for the Asia Tag belt, as he wants Sai to be his teammate for the match against Akiyama and Yuji Nagata.
(5) Zeus vs. Hikaru Sato (Pancrase MISSION)
◆Winner: Zeus (11:10) with a Jackhammer.
(6) Suwama, Shuji Ishikawa (FREE) & El Hijo Del Hatoyama vs. Kento Miyahara, Yoshitatsu & Koji Iwamoto
◆Winner: Suwama (20:38) following the Last Ride on Iwamoto.
~ Suwama with the win in his charity show for Hatoyama, as he declared that he will carry this win and momentum to the upcoming World Tag defense in Yokohama.
~ Even thought he loss today, Iwamoto stated that he plans to be totally focused on the upcoming junior league as he looks to win it again this year.