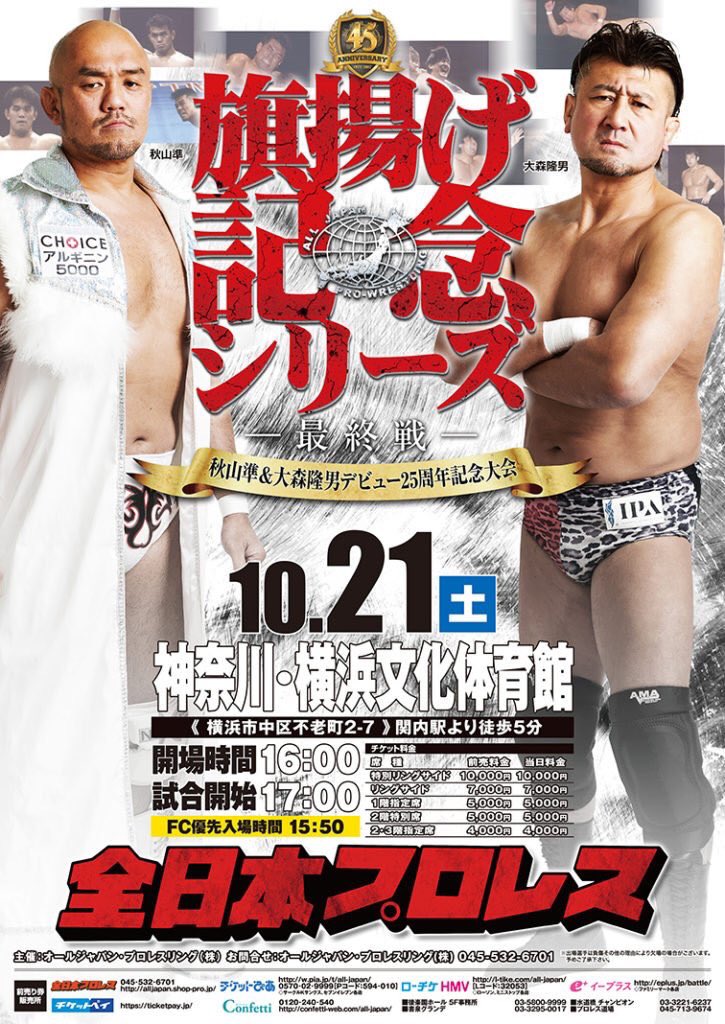 ~ Kenta Kobashi and Toshiaki Kawada came out to honor Akiyama and Omori’s 25th anniversary as pro-wrestlers.
~ Videos also played from Dory Funk Jr., Manabu Nakanishi, and Yuji Nagata.
~ It was announced that All Japan will be returning to the Yokohama Gym this exact day in 2018.

(6) Asia Tag Championship Match: [103rd Champions] Noaya Nomura & Yuma Aoyagi vs. [Challengers] Atsushi Aoki & Hikaru Sato
◆Winner: Aoyagi (18:17) following the Rock Star Buster on Hikaru.
~ 2nd successful title defense.
~ Aoyagi with a much needed revenge win over Hikaru as he and Nomura continue forward as the reigning champions.
~ Not sure if it is a proper forshadowing of what may be coming, but Hikaru and Aoki left on their own separate ways following the loss. The once cohesive team looks to finally be going their separate ways. Though they still have the upcoming “Jr. TAG BATTLE OF GLORY”.
~ It appears that Sai set for a challenge for a LAND’S END team to have the next match.

(9) Triple Crown Heavyweight Championship Match: [58th Champion] Suwama vs. [Challenger] Joe Doering
◆Winner: Doering (20:10) with the Revolution Bomb.
~ Champion falls on his 1st title defense. Doering becomes the 59th champion.
~ Doering now celebrates his 2nd ever ever reign since last holding the belt over 2 years ago.
~ Yoshitatsu made the challenge for the belt. The match has been announced to take place on 11/9 at the Korakuen Hall.

[Personal note: It appears that Yoshitatsu’s challenge was met with a mixed reaction from those in attendance. Though my honest opinion is that Yoshitatsu actually got to be himself in the Oudou Tournament and honestly had some good matches. Yoshitatsu is out to prove himself as a competent wrestler and worth more than he was given since his return to Japan. Though part of that being him forced to sit back following the neck injury.]