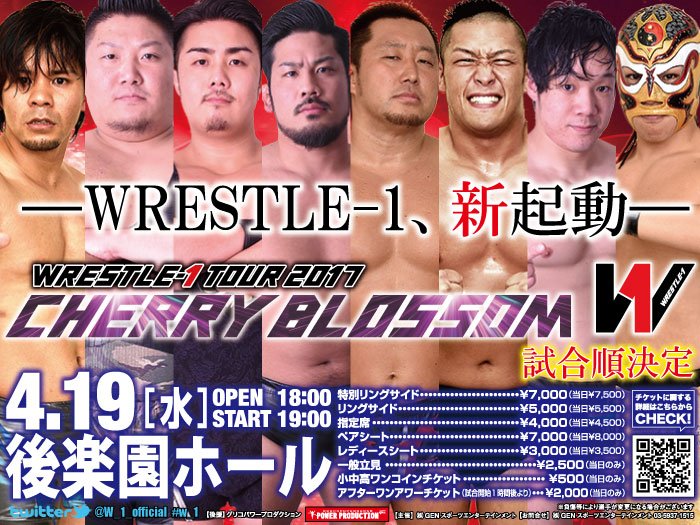 (1) Kohei Fujimura, Yuya Susumu (FREEDOMS) & Masayuki Mitomi (Ehime) vs. Sho Shindo, Ganseki Tanaka & Hajime
♦Winner: Mitomi (7:50) with the Salty Splash on Hajime.
~ Fujimura and Ganseki continued to brawl after the match.
(2) Hana Kimura & Reika Saiki vs. Saori Aono & Natsumi Manki
♦Winner: Hana (8:38) following a Missile Kick on Aono.
(3) Kaz Hayashi & Kotaro Suzuki (FREE) vs. Seigo Tachibana & Jun Tonsho
♦Winner: Hayashi (7:48) following a Final Cut on Tachibana.
~ The new president of W-1 with the win as he stated that he expects great things from the young talent, but they cannot do that without the fans for support. He invited everyone to come out to the Shinkiba show on 5/1. As A.C.E. holds their first show outside of the W-1 Dojo.
(4) Manabu Soya & Jun Kasai (FREEDOMS) vs. NOSAWA Rongai & MAZADA
♦Winner: Soya (10:23) following the Wild Bomber on NOSAWA.

(5) WRESTLE-1 Cruiserweight Championship Match: [7th Champion] Seiki Yoshioka vs. [Challenger] Andy Wu
♦Winner: Wu (13:38) with the Feihong.
~ Champion falls on his 1st title defense. Wu becomes the 8th generation champion.
~ The former champion MAZADA appeared as he assaulted the new champion and declared himself as the next challenger. MAZADA declared that he cannot stand to see the value of the belt being degraded with weak champions.

(7) WRESTLE-1 Tag Championship Match: [8th Champions] Koji Doi & Kumagoro vs. [Challengers] Daiki Inaba & Yusuke Kodama
♦Winner: Doi (18:44) following a Vertical Drop style Brainbuster on Kodama.
~ 1st successful title defense.
~ Kono appeared and made the challenge following the match.
~ Though the champions questioned who his partner may be, with the fans calling out for Keiji Mutoh. Kono stated that he will have a partner that is worthy of challenger.
~ Doi and Kumagoro accepted.

(8) W-1 Championship Match: [11th Champion] Shotaro Ashino vs. [Challenger] Shuji Kondo
♦Winner: Ashino (21:14) with a an Ankle Lock.
~ 1st successful title defense.
~ Ashino declared that he is the true leader of TriggeR now. Though now he does not need a group after besting both Kono and now Kondo. Asserting himself as the only one that matters.
~ Manabu Soya appeared and made the challenge. Soya questioned Ashino’s now disrespect to his seniors. As Ashino plainly put it that everything is different now, that he now stands as the rightful champion. Soya called the champion a hypocrite for changing his attitude so easily.
~ Ashino accepted after asserting himself over the now “former” generation.