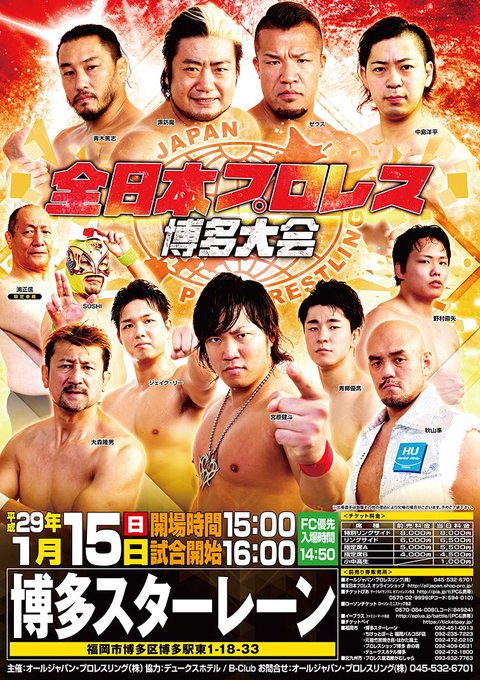 ~ SUSHI formally announced that he would be leaving All Japan at the end of the month. He stated that he will continue to compete as a pro-wrestler in the future, but freelance. Though it was also hinted that he also plans to do activities outside of his pro-wrestling life.
~ He requested his final match for All Japan on 1/28 to be against Jun Akiyama.

(1) Yohei Nakajima vs. Yusuke Okada
◆Winner: Yohei (8:26) with an STF.
(2) SUSHI, Yutaka Yoshie (FREE) & Koji Nozomi (Kageki) vs. Keisuke Ishii (DDT), Ultimo Dragon (Toryumon MEXICO) & Minoru Tanaka (FREE)
◆Winner: Dragon (13:43) with a La Magistral on SUSHI.
(3) Atsushi Aoki & Hikaru Sato vs. Mitsuya Nagai (DRADITION) & Takeshi Minamino (Toneri Family)
◆Winner: Nagai (10:53) following the ROD on Hikaru.
~ Nagai and Minamino stated that they want the Asia Tag belts.
(4) Jake Lee, Naoya Nomura & Yuma Aoyagi vs. Ryoji Sai (LAND’S END), Rikiya Fudo (LAND’S END) & Atsushi Maruyama (FREE)
◆Winner: Jake (14:11) following a Backdrop on Fudo.
(5) Suwama vs. Koji Iwamoto
◆Winner: Suwama (12:09) following a Last Ride.
~ Suwama declared that he aims to remove the recent influx of invaders from All Japan. This stems more from Manabu Soya and now KAI’s return to competing in the promotion.
~ Suwama cannot forgive what happened years ago with most of everyone leaving and the formation of W-1. He said that he will protect All Japan as he remained to do just that in the first place.
(6) Zeus & The Bodyguard (FREE) vs. Jun Akiyama & Kendo Kashin (FREE)
◆Winner: Bodyguard (13:05) following the Bounce on Kashin.
~ Even in defeat, Kashin still remained interested in challenging for the Asia Tag belts. Though Atsushi Onita wants the match to be an “Electric Current Blast Death Match”. Kashin is in total favor of the match, but Akiyama is not in favor of that match taking place. Kashin appeared frustrated at Akiyama being apposed of the match.
~ Akiyama stated that he would accept a single match against SUSHI on 1/28, that now being SUSHI’s final match as an All Japan wrestler.