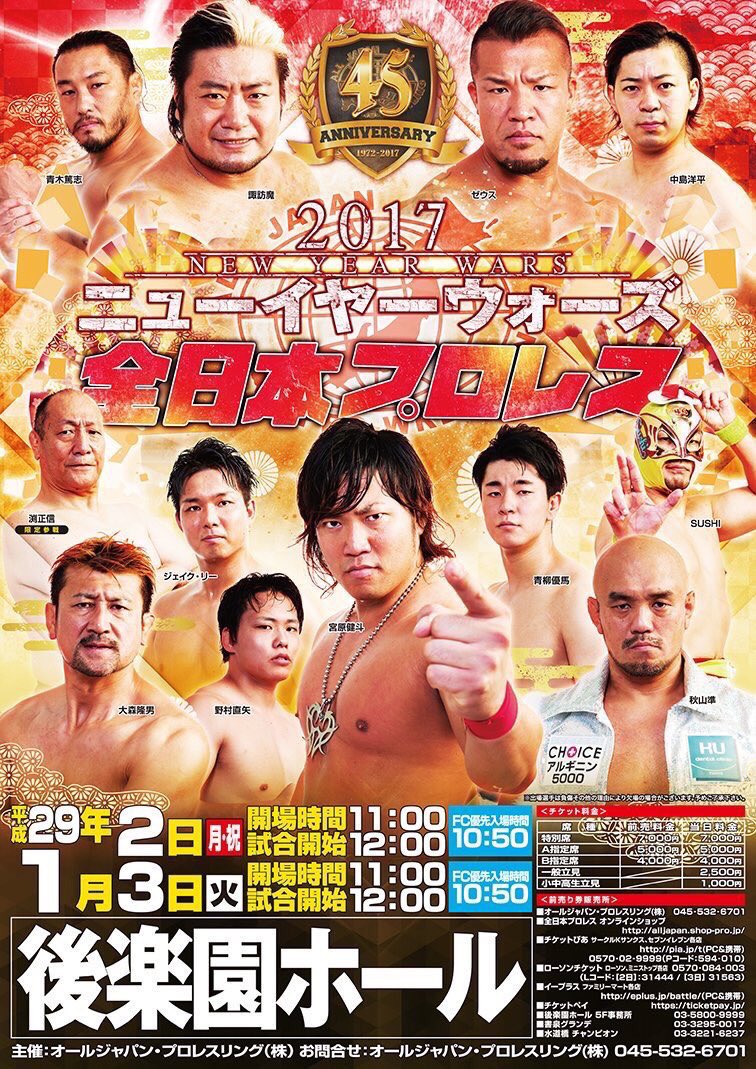 ~ Before the start of the show, KAI, who is now freelance, made his return to the All Japan ring as he declared that he will compete for the promotion in February. He declared that his goal is for a shot at the Triple Crown belt.

(1) Atsushi Aoki vs. Koji Iwamoto
◆Winner: Aoki (9:44) with the Assault Point.
~ Iwamoto competes in his match as the latest member of All Japan, though in loss to the header trainer of the promotion. Aoki was in dominating mode for the entirety of the match, but a sign of respect was shown following.
~ Aoki stated that he knows he is a junior, but that he does aim to stand toe to toe with the heavies. That he will not lose.
(2) Yuma Aoyagi & Soma Takao (DDT) vs. Keisuke Ishii (DDT) & Fuminori Abe (Sportiva)
◆Winner: Aoyagi (9:54) following the Rockstar Buster (Modified Fisherman Buster) on Abe.
~ Aoyagi celebrated the win as he and Keisuke had a stare down before tomorrow’s World Junior title match.
(3) Zeus, Yohei Nakajima & SUSHI vs. Ryoji Sai (LAND’S END), Rikiya Fudo (LAND’S END) & Minoru Tanaka (FREE)
◆Winner: Minoru (9:56) with the Minoru Special on SUSHI.
~ Minoru Tanaka with a decisive win as he stated that “I’m home” as he received a strong reaction from the fans. He thanked everyone.

(4) New Year’s Omori Festival ~ Special 6 Man Tag Match: Takao Omori, Manabu Soya (W-1) & Kazuhiro Tamura (HEAT-UP) vs. Isami Kodaka (BASARA), Yuko Miyamoto (666) & Daichi Kazato (BASARA)
◆Winner: Omori (6:42) following an Axe Bomber on Kazato.
~ All 6 men celebrated with an “Axe Bombers” cheer. Though Soya seemed a little off-ish as he became an honorary member of the Omori and students group.
~ Omori stated that his goal is to once more become champion, with tomorrow’s World Tag challenge and then the TC match on the 15th.

(5) Asia Tag Championship ~ Street Bunkhouse Death Match: [100th Champions] Masanobu Fuchi & Atsushi Onita (FREE) vs. [Challengers] Jun Akiyama & Masao Inoue
◆Winner: Fuchi (11:36) with a Backslide on Inoue.
~ 1st successful title defense.
~ Kashin got involved as well in the match as he helped play guard control from Onita’s outside help. Though he left passed the mid-point as he was getting rid of Pandita from the arena.