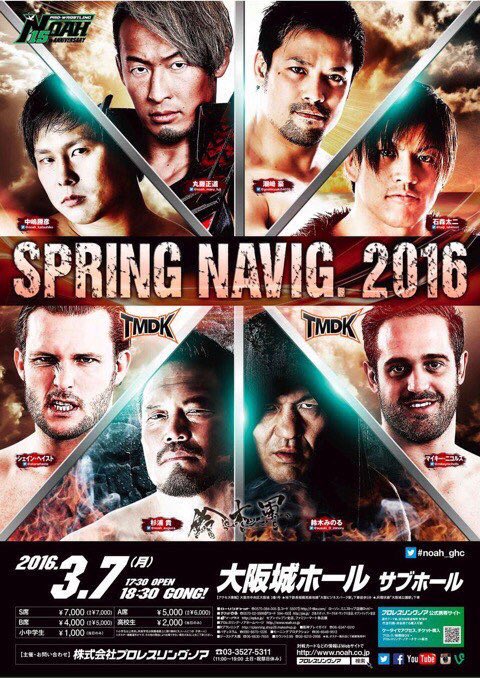 (3) Daisuke Harada vs. Hajime Ohara
◆Winner: Ohara (10:46) with the Muy Bien.
(4) Atsushi Kotoge vs. Kenoh
◆Winner: Kenoh (7:53) via pin-fall.
~ Both of the GHC Jr. Tag challengers claim the win over the champions in prelude to the title match on the 19th. Kenoh declared that Ohara and himself will be champions once more.

(5) TMDK DEPARTURE TO THE WORLD: Mikey Nicholls & Shane Haste vs. Go Shiozaki & Maybach Taniguchi
◆Winner: Shiozaki (15:43) following the Go Arm Lariat on Nicholls.
~ Respect was once more shown between the two teams. TMDK being former GHC Tag champions it seems the challengers may have received a new sense of purpose in their upcoming title match. Shiozaki & Taniguchi look to finally be the team to beat K.E.S., something that TMDK was unable to do.

(7) Takashi Sugiura & Yoshinobu Kanemaru vs. Katsuhiko Nakajima & Taiji Ishimori
◆Winner: Nakajima (17:04) following the Vertical Spike on Kanemaru.
~ Nakajima proclaimed that he “will not stop” in his pursuit to reclaim the GHC Heavy belt for NOAH.