~ Hiroki Murase was forced to miss today’s show due to being in the hospital and suffering from a “lung abscess”. As of right now there is no time frame for when he will be able to return.

(1) Shuji Kondo vs. Daiki Inaba
◆Winner: Kondo (6:04) following the King Kong Lariat.
(2) Ryota Hama & Hideyoshi Kamitani [BJW] vs. Masayuki Kono & Toshiyuki Sakuda [BJW]
◆Winner: Hama (7:54) with the Hamaketsu on Sakuda.
~ The reigning BJW Tag Champions with a win in W-1.
(3) Jiro “Ikemen” Kuroshio, Yasufumi Nakanoue & Yuya Susumu [FREEDOMS] vs. Kaz Hayashi, Minoru Tanaka & TAJIRI
◆Winner: Minoru (10:24) with the B”D”F (Diving Footstomp) on Kuroshio.
~ The new trio made it clear that they could easily take the UWA 6 Tag belts.
(4) Hardcore 6 Man Tag Match: AKIRA, Jun Kasai [FREEDOMS] & Kumagoro vs. KAI, Shota [Sano-Damashii] & Masayuki Mitomi [FREE]
◆Winner: Kasai (13:13) with the Pearl Harbor Splash off of a ladder onto Shota.
~ Kasai took a shot at KAI and told him to get his act together.
~ KAI vs. Sanada was announced for 2/10 at Korakuen.

(5) WRESTLE-1 Cruiserweight Championship Match: [2nd Champion] Andy Wu vs. [Challenger] Hiroshi Yamato
◆Winner: Yamato (15:32) following a Northern Light Bomb.
~ Champion falls on his 4th title defense. Yamato becomes the 3rd generation champion.
~ Yamato stated that he wants Inaba to have the first challenge.
~ Kotaro Suzuki, who is now freelance, made an appearance after the match and stated that he has his eyes on the Cruiserweight belt.

(6) Keiji Mutoh, Akebono [FREE] & Seiya Sanada [FREE] vs. KAZMA SAKAMOTO, NOSAWA Rongai [Gurentai] & MAZADA [Gurentai]
◆Winner: Mutoh (12:48) following a Shining Wizard on NOSAWA.
~ Sanada still did not agree to make his return to W-1 as he wants to continue compete freelance. Mutoh did not seem to pleased as he said things in W-1 are different now. 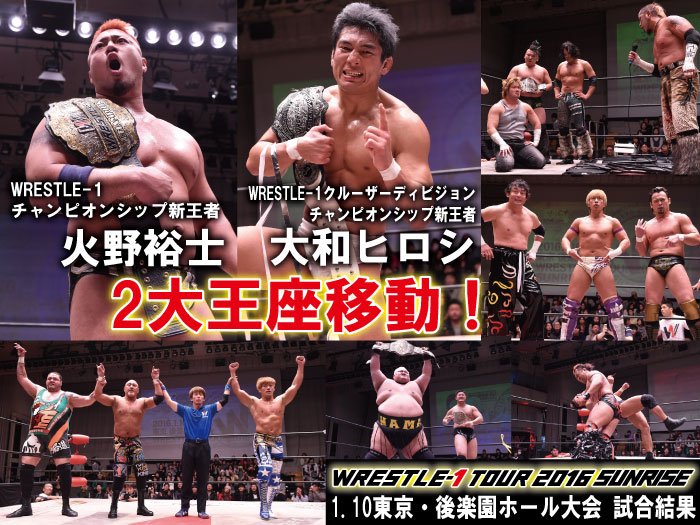 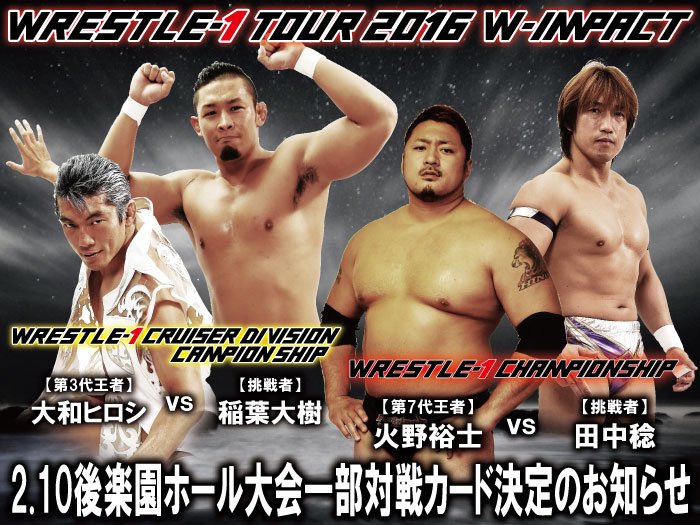 ~ Akebono, The Great Kabuki, and Ultimo Dragon are scheduled to compete.