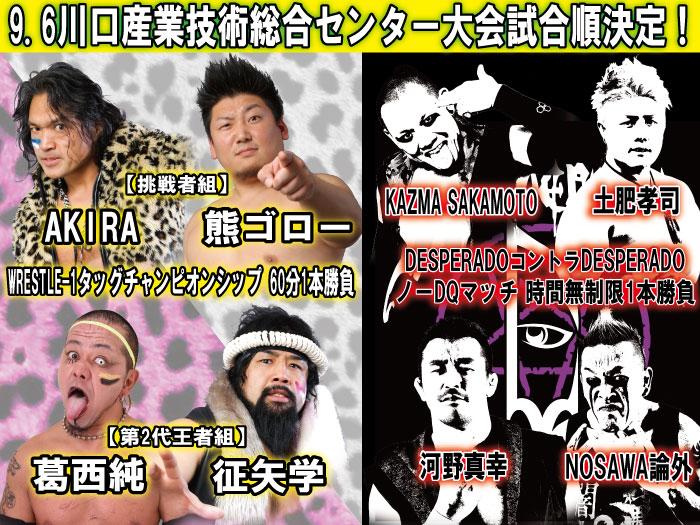 (3) W-1 Cruiserweight Prelude Tag Match: KAI & Minoru Tanaka vs. Shuji Kondo & Andy Wu
◆Winner: Minoru (17:07) with a High Ground Cobra on Andy.
~ Minoru claims a win over the Cruiserweight contender before their match on 9/23.
~ Andy stated that he knows that he will have to train harder than ever to achieve his dream of holding a belt.
~ Minoru stated that he wants to see a huge fire from Andy, as he wants the strongest and best to be shown from his opponents.

(4) DESPERADO Contra DESPERADO – No DQ Handicap Match: Masayuki Kono vs. KAZMA SAKAMOTO & Koji Doi
◆Winner: KAZMA (9:27) following a Gory Bomb.
~ NOSAWA Rongai was originally scheduled to be Kono’s partner, but suffered an injury at the last Tokyo Gurentai show.
~ Though that appeared to not be the case as NOSAWA interfered on KAZMA and Doi’s behalf allowing then to claim the victory and the rights to DESPERADO.

(5) WRESTLE-1 Tag Championship Match: [2nd Champions] Manabu Soya & Jun Kasai vs. [Challengers] AKIRA & Kumagoro
◆Winner: Soya (28:34) following the Wild Bomber on Kumagoro.
~ 1st successful title defense.
~ With the win, Soya stated that he is on the path to achieve the two crown when he takes on KAI on 9/21.
~ Soya and Kasai praised their fellow “new WILD order” member Kumagoro for putting up a strong effort in the match.